Blurr reads something on his computer monitor 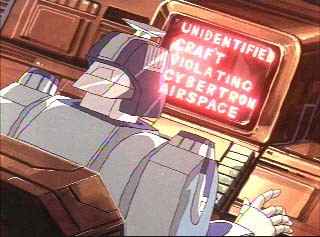 122 captions have been posted for this image so far ...

o.supreme writes: UCVCA! UCVCA! --Keep up with the acronyms people!
trailbreaker writes: "Hey, where did my Cybertron Cheerleaders go?"
Rainmaker writes: OH NO! WE HAVE A MICHAEL BAY CRAFT VIOLATING CYBERTRON AIRSPACE! QUICK EVERYBODY HIDE!
Zeedust writes: "We've got some kind of warning, but I can't tell what the problem is because the stupid computer keeps putting the message BEHIND MY HEAD!"
Godzillabot Primal writes: Cybertron feels so violated
dutnam writes: Ohmygod! We have sumthing coming in on radar, It's an object that flies and is unidentified, It could be an unidentified flying object, you know, one of those UFO thingys, a foofighter, a flying saucer full of little green men that are always disecti
bringo writes: The only word I got out of this was "Violating" and all I could think of was robot porn.
bringo writes: Blurr: "I never learned to read! I been faking all these years."
Zeedust writes: "Computer over? Virus equals very yes? That's not a good prize!" (Thanks to Homestar Runner and no thanks at all to my computer dying on me and leaving me having to use other people's computers.)
seminole1 writes: Boy, I wish I could read this.
- Back to top -
shockwave_inoz writes: BLURR: "Prime! You're NOT gonna believe this..."
PRIME: "I know, I know... that wierdo fleshling leader, George Dubya Bush has completely flipped this time!! Oh, geez - he's enough to try even MY patience. Blurr, we are going to
Unknown writes: This isn't what the nice man at the door said would happen!
snavej writes: I hope it's a big chocolate pudding. Mmm, pudding.
DeltaSilver88 writes: Blurr: Damnthisprintissmall.
Ultra Magnus: You need glasses. That's font 14.
Scatterlung writes: Blurr: What?! This is english! What happened to that goofy font they had on Teletraan!?
Dclone Soundwave writes: Violating? Cybertron? That reminds me! I left Arcee waiting on the steel bed!
Payner™ writes: "PrimeIthinkthatCyclocusandtheSweepsaregoingtobelaunchinganattack,butit'snotallbadIwassurfingthewebanditseemsthatthere'sareallygoodtimesharedealgoingfromthispop-upthatsaid...
Roadshadow writes: Blurr:...the f***? What kind of MMORPG is "Unidentified Craft Violating Cybertron Airspace?"
galvanostril writes: cybertron airspace: Stop violating me!
Starazor writes: Some things just don't translate well...
- Back to top -
Dragonoth writes: "We've got Decepticons at the gate, Decepticons on the wall, Decepticons in the air. If we shoot them out of the air they're on the wall. If we shoot them off the wall they're at the gate. And where does that leave us? No where, that&#
HookX5 writes: Blurr trys his hand at speech therapy master 101

"Say each line slowly, one after the other"
Montmorency writes: Darn! I accidently typed Portsillustrated.com!
Star Glee writes: *Blurr stares at moniter*

-Meanwhile, outside-
Megatron: StarScream, this isn't going to work! I don't understand, so explain your idiotic plan one more time!

StarScream: It's simple- while Blurr and the other Autobots tangle with As
gauthic_angel7680 writes: Damn it, all I wanted to do is order pizza!!!
Chromia writes: Windows Xp sucks!! Kup, we need Mozilla!
Armbullet writes: "Dumb siebertron and there no blurr gallery"
NOBODY LOVES WHEELIE writes: Strangely enough the one thing Blurr couldn't do fast was read.

"Un,un,un.....iden,unident,uni....dennnnnnnnnnnnnnnnnntif......ied? Is that right? Un-i-dent-if-ied.Yeah ok that sounds right. Ok crrrrrrrrrrrrrrrrrrrr........c..c....c....craaaa
1337W422102 writes: "Stupid Portholes 98 keeps crashing! Damn Black Screen of Death!"
USDA Prime writes: Blurr: "Ohyeah!Youcanviolatemyairspaceanytime,babe!"
- Back to top -
Decepticon Commander writes: Blurr:What does "VIOLATING CYBERTRON AIRSPACE" mean.I don't do anything to it.
Binaltech Bombshell writes: Okay, Blurr, let's play "The Pyramid"!
Binaltech Bombshell writes: F***in' Pop-Up Ads!
NOBODY LOVES WHEELIE writes: Blurr,"Oh come on 1hr 15 mins to download a preview of a movie.Man I so hate this dial-up crap.I gotta get a cable ISP."
red_ensign writes: (And thus is the planet Cybertron destroyed by the combined legions of Unicron and the Decepticon forces because Blurr neglected to remember that for all his skill in speech in reciting the english language, he failed high school due to illiteracy. Anoth
NOBODY LOVES WHEELIE writes: Blurr,"Oh crap Lars found me downloading Metalica songs! Ohhhhhhhhhhh Wheelieeeeee can you come here and sit at my computer for a minute?"
Tammuz writes: Why do get the feeling this is gay porn junkmail?
NOBODY LOVES WHEELIE writes: Blurr,"Dammit for the last time I do NOT wanna mortgage my home! I don't even own one!"
Warhead writes: whats self-destruct mean
Mikemann writes: Hehehehehehehethisshouldshouldshowultramagnus.Magnus!Help!
- Back to top -
Zeedust writes: And all at once, the autoots froze, eyes turned to the screen, wondering who had come, wondering if it was firend of foe, waiting for any word from the surprise visitor, waiting for them to make the first move...

"Avon calling!"
Zeedust writes: Prime: "What did you do?"

Blurr: "I dunno, but next time Teletran asks if I'd prefer a nice game of chess, I'm saying yes!"
NOBODY LOVES WHEELIE writes: Blurr,"What the hell,all I was trying to do was install Windows XP?"
Rampage writes: asura is violating our airspace? everyone get your gas masks on we are in for a nasty odor.
-Soundwave- writes: Blurr: Dang so what can I do while I wait fo rthis to down load???
Acelister writes: Blurr: "This happens everything I want to surf Ikea's website!"
Acelister writes: Blurr: "Optimus Prime! There's soemthing invading Cybertron!"
Optimus: "I can't deal with that right now!"
Blurr: "Isn't that what Ultra Magnus ususally says?"
Optimus: "Usually, yes. But he called in
Acelister writes: Bluur: "Hey, this isn't Crazy Jamal's Autobot Busts website! Its not Crazy Jamal's Autobot Busts website at all..."
Ultra Magnus: "Didn't you say the same about Hope back in 2005?"
Blurr: "What?"
Acelister writes: Blurr: "Do I need glasses, or does that really say 'Meet interesting Fembots looking for YOU'?"
Acelister writes: Blurr: "Oh, so it WASN'T a game..."
- Back to top -
Acelister writes: Blurr: "There... Now when it gets to midnight on the 31st of March... Bam!"
Kupp: "Too late for April Fools, lad. You spent too long making that alert!"
Blurr: "Why did I have to make it using BASIC?!"
Predagade writes: blurr:nonono,itsmyfaveouritetvshowandithoughtperceptorwassupposedtohavesetthisupbutitisnotsetupandhowdoiknowthat?cosimnotwatchingtvthatshow.
Wheelie:tv screwed 'cos grimlock chewed
wavelength writes: blurr; iwannaplay,iwannaplaywiththeunidentifiedobject,soletmeout
[a cricket is heard in the distace]
Octocon writes: Part 2

and issues the command to the city

Blaster: "this is blaster blasting at you from metroplex control, we've been orderd to seperate so
Octocon writes: Part 1

Magnus is informed about the Alert

everyone looks at Magnus puzzled not sure where to run.

Magnus mumblin incoherently repeately: "Magnus, i want the matrix, never! Magnus, i wa
Octocon writes: Blurr: "UltraMagnus UltraMagus, Teletran 2 had detected something bad, and when i mean bad i mean unknown bad, but when it unknow you bets its gotta be bad, if Teletran 2 dosent know what it is."

Magnus sighs: "Blur do you have any idea
Octocon writes: Cupp standing lookin over Blurr's shoulder, as Blurr has his usualy hyper fit: "oh no, Cosmo and Skylinx, got drunk and painted up, and set of the airspace alarm again!"
Prime Max writes: Blurr "Oh come on, unidentified? Its either Decepticons or Quintessons, take your guess."

Cosmos: AIIIEE!! DAMN IT WHY DOES THAT ALWAYS HAPPEN TO ME??

Ultra Magunus: What did you say? Slow it down.

Hey, why didn't anyone tell me I look like crap?
Solidus writes: ARGH!!! THELETTERSAREBURNINGTHROUGHMYFACE!!!
- Back to top -
Me am Grimwave writes: Argh!SlagThesePop-ups!ScrewThisPop-upBlocker!DamnWindows!
Wolfguard writes: A week later, Blurr is a special guest on Coast to Coast AM to discuss this UFO among his other "alien encounters" with George Noory, soon followed by Starscream`s ghost for a discussion of...tHe PaRaNoRmAl...
1337W422102 writes: Blurr: "AwSlagILostAgain,I'mSoBadAt"MissileCommand"!HeyRodimus,PutDownTheMatrixAndGiveOl'BlurrAQuarter!Eh?JustOneQuarter!WellMaybeTwoOrThree...

I give up, I wonder if Law and Order is on"
saiyan_prime writes: Ultimately, the repercussions of the Michael Jackson trial were seen even on Cybertron. However, TeleTran 1 had to translate the predicament in terms the Autobots could comprehend.
Masterpiece Prowl writes: Blurr: (VERY fast)RodimusRodimusthebooksyouorderedonAmazon.comhavearrived!
Kevinus Prime writes: "Why is this thing speaking English? I hope it's not important."
HardHead writes: Due to recent cuts in funding, the Autobot army has since been forced to substitute faster then light vocal transmitions for text messages. In this case, it took Blur two minutes to punch in a message vital to the survival of the entire transformers rate.
Death Gunner writes: Blur: Level 5 here I come.
nojimus writes: I love you too babe
krukid writes: oh, so that's what the red button does.
- Back to top -
Acelister writes: Blurr: "I thought this was a 500 Free hour AOL account!"
Kup: "It is, lad!"
1337W422102 writes: Damn, why'd I have to use Windows???

*The Beast Warrior whose alt-mode is a penguin enters and says "I warned you!" to Blurr*
Road Turtle writes: Blurr, "AaaHh! The screen's violating My space!"

(letter A is on Blurr's helmet)
nojimus writes: AH-HA! Pizza's here!
nojimus writes: Blurr: Magnus I think we have a problem!
Magnus (offscreen): I can't deal with that right now!
Starscream NZ writes: Blurr: Well, that can't be good.....
Ratbat writes: Radar indicates an unidentified craft heading our way, Rodimus! It may be a Decepticon craft!
Ratbat writes: Rodimus! There may be a Decepticon craft heading our way!
nojimus writes: Blurr: heyKupheyKuphaveyoueverseenanythinglikeithuh?huh?huh?
Kup: It reminds me of a screen readout I once saw on Tetryon Alpha 4. The screen was really bouncing that day.
Blurr: yourereallyboringyouknowthathuh?huh?huh?
Kup: Reminds me of a conversatio
tfggerhk writes: Blurr:damn! this is supposed to be porn!
- Back to top -
Shermtron writes: Blurr:Darn i wanted Seibertron.com..
Shermtron writes: BLURR:HELP HELP WE'RE BEING VIOLATED!!
- Back to top -