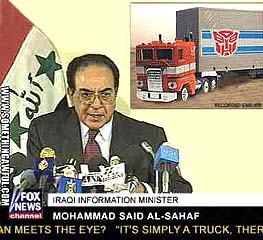 228 captions have been posted for this image so far ...

Black Hat writes: "No, there are no Decepticon bases in Iraq. Also Islam is a religion of peace, and that man with the bulky vest just wants to give your child a hug."
Godzillabot Primal writes: This Photo started the war, no kidding
Heckfire writes: First one of you bastards says ANYTHING about "Carbombya" I SWEAR oil prices will be raised $100 a barrel...
Ramscreamer writes: minister:optimus is dead!
*sound of peeps protesting*
ultra magnus:the goddamn junkions fixed me so why didnt they fix prime?!
StarSaber1701 writes: All Run The USA Send out the calvary Run....
shockblaster5 writes: Shortly after the conference, Optimus Primes from all generations crashed straight through the building, bringing it down in the process.
shockblaster5 writes: And now For something Completely different, a man with a tape recorder up his nose.
lockepsb writes: I would like to thank all Americans for bringing their Walmarts and Mcdonald's to Iraq. Because the Americans have supported us and given us all these new Resources we finally get the little cars that can change into robots, which are called Transfo
Lich Lord Dranas writes: Behold our new leader! All hail Prime! All hail Prime! All hail Prime! All hail Prime! All hail Prime!
Roadshadow writes: My fellow Iraqis. Do not fear, there is NO SUCH THING AS AUTOBOTS. But we do believe in Decepticons....
- Back to top -
Superion_007 writes: Optimus: Let's show these Iraqi sissies what happens when you mess with the USA!!
Superion_007 writes: America's Ultimate Weapon against terrorists

Mohammad : NOOOOOOOO!!
Lug writes: in todays news, we have found out that optimus prime is coming to try and destroy iraq


0
Unknown writes: george bush is invading us .we are in deep man. hes sending optimus prime! we might have to sommon help from megatron!
Unknown writes: "Our new design for a mobile biological/chemical lab. This disguise has to fool the americans!"
Optimus Primevil writes: For the last time, it's name is convoy not optimus prime. You are all under the capitalisitic swine hasbro's spell. TAKARA RULES!!!
- Back to top -
Starscream writes: There is no Optimus, only Allah
NOBODY LOVES WHEELIE writes: "Welcome to the Optimus Prime celebrity roast,I love Optimus I really do but from what I hear everybody in this room has at least once am I right.(HAHAHAHAHAHAHAH)But seriously folks Old Op he's a great guy always takes an interest in th
SeekerInAFakeMoustache writes: When they noticed their ratings were falling, a popular Iraqi news station decided to regain their popularity by one-upping the popular Internet phenomenon that is "Bert is Evil."
Potimus Prime writes: Bah! I'll be impressed when the Takara one drives up.
Unknown writes: "After brutaly murdering Saddam, Optimus had this to say:"With all the talk about Sodamy Insane, I thought he was Galvatron. My bad." Yes, his bad indeed."
quadrunner writes: Mohammad: Yes, we are armed with autobots now, and we are ready to take on the americans.
Reporter: Are you sure, because that optimus prime looks like the one that i lost about two days ago? come to think of it, that looks really similar to mine. Moham
Professor Smooth writes: Iraq is proud to announce that it is the latest evil organization to try to control the Transformers. We hope that our attempt ends better than Halo's or Cobra's.
FortMax writes: ...so, basically if you hear crappy stan bush music start playing, run like hell
Skyfire the Artist writes: Al-Sahaf wondered who switched his Dukes of Hazzard poster with an Optimus Prime one.
Fallengaiden writes: I repeat. There are no Transformers in Iraq.
- Back to top -
Unknown writes: Ahum, thanks to new technological resources, have we been able to discover our truly messiah, behold: Optimus Primallah!!!
Unknown writes: On second thought, we should throw a party at honors of those mighty brave warriors....
Unknown writes: This just came in: This red truck murdered our beloved leader Saddam. When Saddam asked: "Who are you?" He answered, in robot mode: "Your worst nightmare". Our beloved leader was then brutally shot till he met his death
Unknown writes: This is the US armies latest weapon, a truck that turns into a robot. It has been tested and it has been certified that this robot, codenamed "Optimus Prime" can and will defeat all of Americas enemies, which have now been codenamed &
NOBODY LOVES WHEELIE writes: I.I.M.,"I have been informed that since the fall of our former government our new government full supports Transformers:Armada..", grabbing the microphone with a wild look in his eyes,"I can't do this anymore G1 ONE RUL
apex writes: Reporter: "urm sur have you any worries about the footage you have just recieved?"
Mohammad:"no i do not, as i have said, it is only a Articullated Truck... checked at the border it is carrying only computer equiptment... and d
apex writes: Mohammad: "This is a warning to all the American people, that your are commiting a hasness crime and we will be forced to retaliate... this truck was spotted 24hours ago out side our capital... it is said to contain a powerful nuclear device pois
Prime Nova writes: No, word of a toy line featuring this toy will never been seen on this planet , ever.
Transformer Gal writes: Iraqi Guy- World leaders have been puzzling over a note suposedly sent by Optimus Prime to Saddam Hussien at the start of his latest war. It was found in one of his blown up castles. The note appeared to be in code as follows:
370HSSV-0773H
Finally, an
Scantron writes: Minister: As Unicron's new spokesperson, I must say the following: The Autobots are nowhere close to stopping Unicron. Optimus Prime does not have the Matrix. The Autobots simply want to destroy Unicron because he has oil. Autobot charges tha
- Back to top -
Laserbot writes: Minister:"yeeeesss i told you a milion times that is the new President of the US. now can i continu on saying how we will concurr the pathetic US people even though more than half our troops have been illiminated.... ummm.... but thats not true e
TheRoMan writes: "You say the Autobots are here to bring peace and freedom to the Iraqi people? I say, nonsense...why do they not go to China? Because...we have oil, and oil makes energon! I have been in secret discussions with our NEW minister of defense STARSCR
SeekerInAFakeMoustache writes: Al-Sahaf was a little worried when a small, ghostly Optimus Prime started telling him to do things, but he figured hey, it was better than Elvis.
NOBODY LOVES WHEELIE writes: Iraqi Information Minister,"I love the 80's!"
Unknown writes: I repeat, there are NO giant transforming robots in Iraq, only infidel American National Guardsmen with the same name!
thexfile writes: Iraqi Information Minister : 'goodevening , welkom to this special unvailing...we are proud to present in houner of discovery's robosapians tonight....

after al these years of working in secret in the deserd we are proud to presend ou
PhoenixPrime writes: Oh S#!t, we are so F@#*ing screwed now.
Unknown writes: Prime has run over Saddam! The Autobot leader was quoted saying
"Damned war coverage interupted Days of our Lives..."
TetraReris writes: The rubber wheels are made by 100 percent Iraqi oil. In fact all it's plastic parts are 100 percent Iraqi oil.
K-nonFodder writes: No this super advanced weapon of the free world seen numerous times rolling over iraqi tanks does not exist, and for the record the iraqi capitol is still well out of the grasps of the invading forces. I am sure you will all be glad to hear our President
- Back to top -
Transformer Gal writes: Iraqi Guy- "There are no such thing as giant metal aliens. It's just a truck. What does it matter that it drives around without a driver and blows this and people up. THERE IS NO SUCH THINGS AS TRANSFORMERS!"
Frenzy writes: Iraqi guy- earlier today, a dozen or more giant metal beings called transformers attacked the Iraqi capital, Bagdad. The truck, seen here was leading the attack, presently killing thousands of civilians!
Koultunami writes: There are no Autobot infidels in Baghdad, Never! - However my feelings as usual is we will dismantle them all! - Not undermining the fact that our initial assessment is that they will all die. I blame Blaster â€“ he is marketing for the Autobots. God will
thexfile writes: Iraqi Information Minister : " ehm... is on this thing ?? o oke .. ladies and gentelmans ... you know we have made a new parlemant and i would like to introduce our candidate for the position for the 1st mair of bagdad....