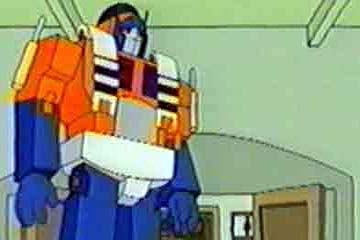 229 captions have been posted for this image so far ...

Emerje writes: "I'm only Jewish during the holidays, the rest of the year I eat energon bacon like everyone else."
Optimum Supreme writes: "Wait, to convert I have to do what to my smoke stacks?" And thus the short stacks came to be
MagnusLabel writes: "My parents always want me to be a rabbi."
Black Hat writes: Optimus was never very good at cosplay...
Black Hat writes: What? No, this is a football scarf and bobble hat!
Rodimus Prime writes: No wonder Megatron looks like WWII German soldier...
Angelbot writes: Optimus Prime decides to give Reformed Judaism a try after Elita One's conversion to the Sede Vacante branch of the Catholic church.
Angelbot writes: I hope Chromia and Ironhide arrive soon. They have the rest of the candles for the Menorah.
hot rod 907 writes: I finaly gest star on an episode of family guy and it gets banned! I havent been this pissed at fox since canceled RID!
Zeedust writes: "Hey, rabbi... Quick question, is diesel fuel kosher?"
- Back to top -
StarSaber1701 writes: Optimus Prime: I am not Jewish I did this so I can get paid I am starving here
Unknown writes: Jewish Prime:Ok who didnt light the meenorah!?

Bumblebee:Please Father Prime i didn't mean to!!!!
Unknown writes: God, I guess this makes me racist. Or the director just f***ing stupid.
Kamakaze Thrower writes: How Optimus Prime REALLY got the Matrix of Leadership.
shockwave_inoz writes: Optimus Primessuggener: "Oy vey, oy vey. If you two boys don't stop that, I'll give you a potch on the tucchus!! I bet Topol never had this trouble."
Roadshadow writes: Autobots, transform and roll out to the bagel shop!
Not Sonic writes: i nned to get my yamaka refitted
Powerstorm writes: Prime prepares to play Shylock in Shakespeare's play, The Merchant of Venice.
Marv writes: Starscream, if you can't keep quiet, I suggest you'll just wait outside until Bumblebee is done reading his part from the Torah!
Marv writes: Ah! Imam Hot Rod! Pope Megatron! Ultra Lama! Come in, my friends, we have much to discuss!
- Back to top -
Zeedust writes: Oh, sure, it's just nonsensical now, but add a picture of Megatron in stereotypical islamic garb and it's suddenly witty political commentary.
DeltaOmega writes: One word:

Peter:" Hey dont worry Chris you get to watch Rabbi Prime fight the e
Chris writes: Peter: "Hey Lois look here its the Transformers."
Lois: "Finally a show Chris can watch."
Chris: "Ah mom....."
Peter:" Hey dont worry Chris you get to watch Rabbi Prime fight the evils of t
- Back to top -
Unknown writes: "And today, we shall read a passage from the Covenant of Primus..."
Skyfire the Artist writes: We don't believe in Robot Jesus. We believe he was built and programmed well, but he wasn't our Messiah.
PlasmaRadio writes: Rabbi Optimus: "Those schlemeal Decipticons have stolen Haunica! Lets just schlep on down and lay a schmekel of whoop-tushie on their Decepti-cans!"
Unknown writes: Why am I a powermaster already???
Prowling Hound writes: Rabbi Primeman gets ready for Wheelie's Bat Mihztvah!
Unknown writes: If you think being Jewish is hard, wait until you see what we cut off during an Autobot Brisk
Prowling Hound writes: How many bagels did you say you wanted?
Unknown writes: Optimus infiltrates a synagogue, looking to find Rumble and Frenzy, who now transform into a dreidle and a Star of David.
Unknown writes: Political correctness sucks!
Unknown writes: Havatransforma!
- Back to top -
SlagMaker writes: Shalom!
Slapshot writes: dang it some one get me dreamwave's number these marvel guys suck!!
Slapshot writes: how dare they do this, i've done summer stock!!!
Detour writes: Oh great. First wardrobe screws up, and now I'm on the wrong set. And where the hell is my latte????
Unknown writes: I always thought Autobots were Christian.
Unknown writes: Who cares if I'm wearing a Jewish Garb?! Doesn't anyone notice that I look like a goddamn Gobot?!
Unknown writes: And all the Autobots say I'm pretty fly for a Rabbi.
Unknown writes: So it is written in the Talmud, "...an Autobot shall rise from our ranks and use the power of the Matrix to light our darkest hour." -Alpha Trion 3:16
Unknown writes: We all knew that some autobot was Religious
- Back to top -