Toy Fair 2020 - Episode 241 of the Seibertron.com Twincast / Podcast is almost all about the just concluded 2020 New York Toy Fair and all of the new Transformers products and media revealed by Hasbro. This begins with a look at the large amount of product revealed for Generations War for Cybertron: Earthrise, including the Titan Class Scorponok, Commander Class Sky Lynx, Leader Class Doubledealer, Voyager Snapdragon, Deluxe Class entries Smokescreen, Runamuck, Arcee, the Battle Masters such as Slitherfang and Doublecrosser plus plenty more Micromasters. Some special attention is also given to the long anticipated Quintesson toys, arriving with Voyager Class Quintesson Judge and a Deluxe Class Alicon. A trailer for the upcoming animated version of the War for Cybertron was also released at the event, with the show set to be released on Netflix sometime later this year. New Generations Siege redecos that tie-in with the series are also noted before the talk turns briefly to Cyberverse, its third season and the associated toys. Studio Series rounds out a busy agenda with Devastator finally coming to life in the line along with Blitzwing and other familiar movie faces. We wind down by catching up on some items shown at Winter Wonderfest that have piqued our interest with the latest images of Masterpiece Tigatron and Arcee. Closing out this episode is another round of the recurring "Bragging Rights" segment plus off-topic discussion on a strange Beast Wars toy variant.

War for Cybertron Earthrise - Seibertron now has a whole gallery with fresh new images and views of the Transformers War for Cybertron Earthrise display from the 2020 Toy Fair. Here we get clearer views and different angles for deluxes Arcee and Smokescreen, Airwave as the 2nd Micromaster base to be given a robot mode and named a Modulator, the first ever Allicon figure, and Fasttrack as a weaponizer/modulator type bot for Scorponok.

Studio Series - Seibertron now has a whole gallery with fresh new images and views of the Hasbro Studio Series display from #HasbroToyFair 2020! Here we get clearer views of Revenge of the Fallen Soundwave, Sentinel Prime, Skipjack, Overload, Scrapper, Bumblebee Cliffjumper, Bumblebee Blitzwing, Topspin, and Devastator! Although there aren't as many offerings as the Earthrise line Studio Series fans will rejoice as Devastator will finally be complete. These are just a handful of images. You can go to the entire gallery here or click on any image to be brought there. s

Scorponok, Sky Lynx, Arcee and more! - Thanks to a heads-up from Seibertronian Sabrblade, we have news of an IGN article revealing four new Earthrise toys before New York Toy Fair 2020. The four toys in question are Deluxe Class Autobot Arcee, Decepticon Fasttrack, Commander Class Sky Lynx, and Titan Class Scorponok. Check out the images and information presented, and tell us your thoughts in the Pub forums below.

View All · Newest · Most Popular 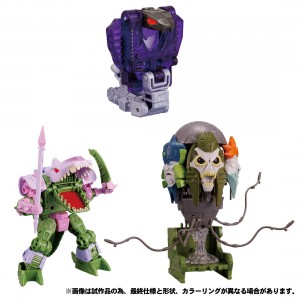 NEW! Greetings Seibertronians! Fellow Seibertron user Sabrblade, has reported that Takara Tomy have announced that Earthrise figures Deluxe Class Alicon, Battlemaster Slitherhead and Voyager Class Judge Quintesson will be exclusive to Takara Tomy Mall in Japan. Below you can find the Japanese listings below, along with some new pictures. Among the pictures is a poor Battlemaster Smashdown being held captive in the Quintesson base mode, and a group of Alicons protecting a judge Quintesson. - Read More 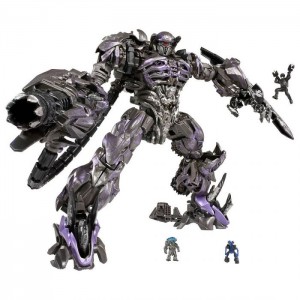 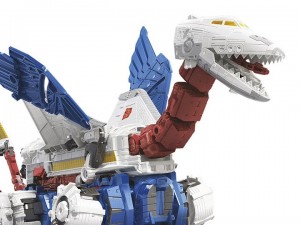 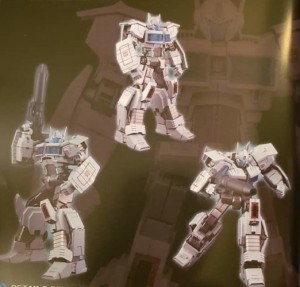 Looks like we've got a few more Flame Toys Furai Models coming on the horizon. While not shown at Toy Fair this past weekend, scans uploaded to MyFigureCollection.net from what appears to be a Flame Toys catalog that might have been available at Toy Fair revealed a pair of familiar repaints. First is the Bumblebee with heli-pack kit in red coming in June. We don't get a whole lot of red recolors of Bumblebee that aren't Cliffjumper, but the repaints are pretty standard all the same. Next is our - Read More 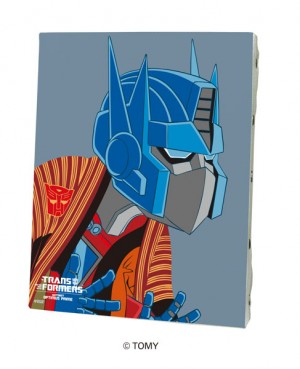 The ever popular Japanese collectibles store AmiAmi listed on Thursday a very large and very random number of official Transformers items from company A3 due for release in April. A3 appears to be an exclusive imprint of AmiAmi. The company is no stranger to Transformers goods as they've done similar products in the past for some of the live action movies and Beast Wars. Of the most note in this batch is a selection of canvas art prints depicting Optimus Prime (as written on the front of the - Read More 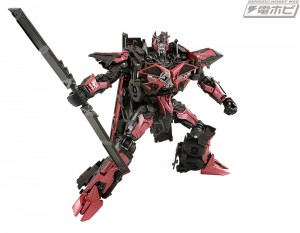 Thanks to Dengeki Hobby, we have some brand new images to show you today of the upcoming Transformers Studio Series Offroad Bumblebee and Sentinel Prime! Offroad Bumblebee is a brand new mold deluxe class figure, and is based on the Jeep form Bumblebee temporarily took at the beginning of the Bumblebee movie. He faithfully recreates his appearance from that film, and transforms into a pretty nice little yellow Jeep. Here we get a look at him in a couple poses, showing that not only can be - Read More 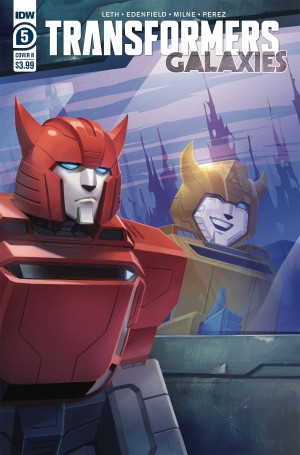 Thanks to a tweet from Sara Pitre-Durocher herself, we have news that her cover for the coming Transformers Galaxies #5 has been revealed! Transformers Galaxies #5 will be focusing in on Cliffjumper, and will take a fun take on how Cliffjumper always looks like a red Bumblebee, and will include Cliff alongside a character famous as the Decepticon Emperor of Destruction of Victory Fame, Deathsaurus. The 2-parter is being written by Kate Leth and Cohen Edenfield, with art by the always - Read More 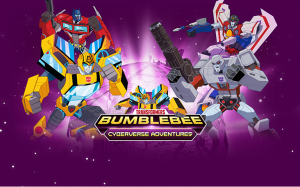 We have some sad news to bring to you today regarding the Transformers Cyberverse TV show. It appears as though the 26 episode 3rd season will be the final season for the show. This news comes to us from Ehud Landsberg, who is one of the 3 directors for the show. He posted on his LinkedIn account that Season 3 will indeed be the final season for the show, which is a shame considering how good the show has been getting and also just how much love has been shown by the show to many corners of - Read More 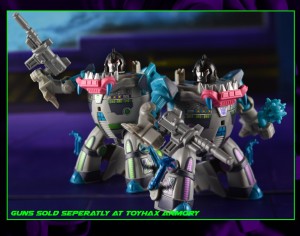 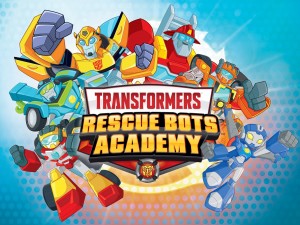 Thanks to a heads up from Seibertronian Sabrblade, we have news that the long awaited Rescue Bots Academy Season 2 Trailer is now live! The Season 2 trailer is 90 seconds long, and gives us a look at the upcoming Rescue bots series, which centers around a group of young new recruits. Following the fact that this is Season 2, the season will focus in on the 2nd year of the recruits training, where each recruit is paired up with a Mentor, which includes the likes of Heatwave, Bumblebee, and - Read More 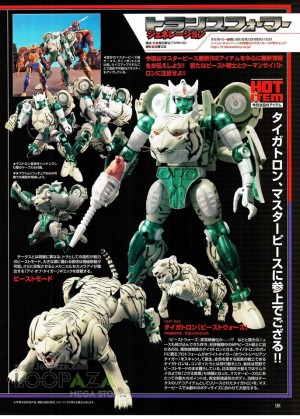 Thanks to a heads up from Seibertronian Cyberpath, we have news that Loopaza Mega Store has put up their scans of the regularly scheduled Figure King Magazine, and #265 features some of the new Takara products that have been shown off this month. Most prominent among the scans are images of Masterpiece Tigatron and Arcee, who were just revealed a few weeks ago over in Japan. Tigatron features some images of him standing side by side with Dinobot and Cheetor, and showcasing some robot and - Read More 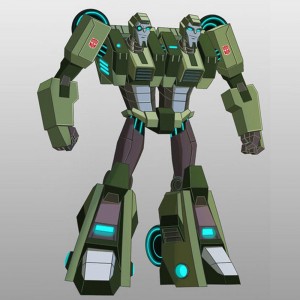 Thanks to Seibertronian Bacem, we have news that a video review has hit the internet for the highly anticipated Cyberverse Ultra Class Rack n' Ruin! Rack n' Ruin is a very unique character to Transformers, and one whom took a long time to finally get his first toy. Rack n' Ruin debuted as a set of conjoined Autobots who were members of the Wreckers back in the original Marvel Comics, though much like their leader Impactor, it took time for them to break away from the comic world and into - Read More 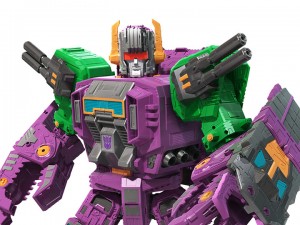 ------------- NEW PREORDERS ------------- MY HERO ACADEMIA FIGMA NO.470 OCHACO URARAKA From the My Hero Academia anime series comes a figma of Ochaco Uraraka, a classmate of Izuku Midoriya! Ochaco features the smooth yet poseable joints of figma, which allow you to act out a variety of different scenes. $99.99 https://www.bigbadtoystore.com/Search?H ... rand=10043 TRANSFORMERS WAR FOR CYBERTRON: EARTHRISE The Autobots and Decepticons have left Cybertron, but their battle rages on as - Read More 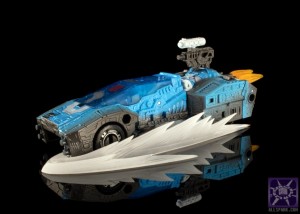 People who attended Hasbro's event at the 2020 Toy Fair were given goody bags and in them was a deluxe from the upcoming exclusive Netflix Transformers series exclusive toyline. They are all Siege toys with different paint apps and each come with a cardboard piece to make Teletran One. Since they are all out in this way, it was not long for reviews to come in. Below you will see a review of the entire first wave, done by RFC Reviews. These deluxes are Chromia, Scrapface, Sideswipe, - Read More 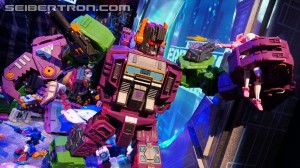 The grand spectacle of Toy Fair 2020 rolled into town, giving us jabber jaws plenty to gab about on the Seibertron.com Twincast / Podcast. Join your host ScottyP alongside xRotorstormx, Cobotron, and a brief drop in from the Boss Monkey himself, Seibertron as they discuss and react to all that was revealed at the (with echo) BIGGEST SHOW OF THE YEAR! Episode #241 “Toy Fair 2020” is available directly and in our RSS Feed, and should appear on Apple Podcasts, Google Play, and Stitcher - Read More 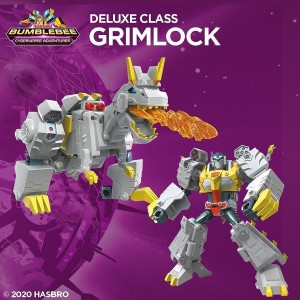 Fellow Seibertronian Chuckdawg1999 has done a review of the upcoming Transformers Cyberverse deluxe Hot Rod. This is one of the remaining 4 figures needed to complete Maccadam. chuckdawg1999 wrote:Continuing the Deluxe Class subline of Cyberverse, Hot Rod is a solid figure that's a great representation of the animated design. Transformation is smooth but satisfying, although there are some details missing like Hot Rod's trademark yellow spoiler. The blast effects are a nice addition but I - Read More 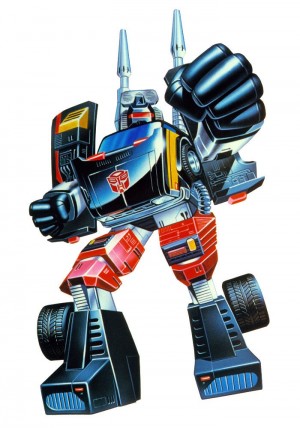 Thanks to a heads up from Seibertronian Cassette Dan, we have some interesting news to bring to you. According to a listing at UK online retailer Zavvi, a Deluxe Earthrise Sunstreaker and Trailbreaker are coming in October 2020. If these listings turn out to be correct, they'd likely be coming out in Wave 3 of Earthrise. This seems very likely, given that site sponsor BigBadToyStore has two "Secret" figures listed for that wave, alongside Fasttrack and Runamuck. While this should be taken - Read More 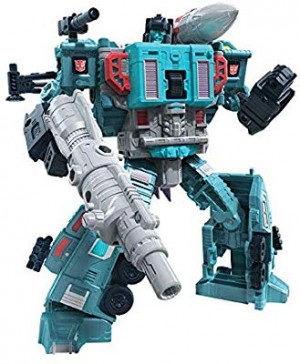 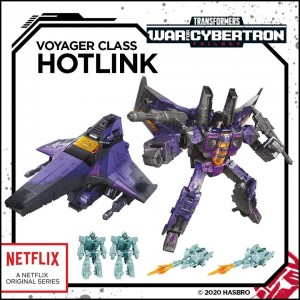 Hasbro has provided vibrant versions of their renders for all the toys revealed at Toyfair over the week-end on their Facebook page. These regroup the robot mode and alt mode(s) in one picture. This serves as a reminder of all the new toys revealed. I myself cannot remember so many reveals all at once. We can see reveals for four lines, those being Cyberverse, Netflix Transformers series, Earthrise and Studio Series. Looking at all this, I can't think back to a better Toy Fair. The ones that - Read More 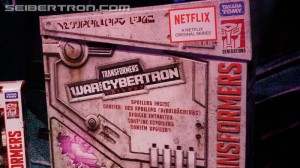 If you want to know some spoilers to the contents of the spoiler boxset, well we now have a full description of its contents. Fo those still wishing to purchase a white box not knowing what is inside, you can buy it at the following link and stop reading after that. Here is the link to the Walmart site: https://www.walmart.com/ip/Transformers/264962216 In the UK, this item can be purchased from Zavvi, a reputable collectibles e-tailer (who has surprisingly good shipping prices for - Read More

View the rest of our exciting Transformers news here!

These items were recently sighted at retail stores:

56 Shockwave with Wheelie and Brains