Transformers Masterpiece Beast Wars Megatron in the Works at Takara 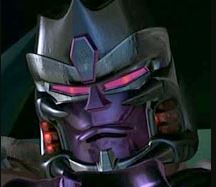 Yamamaya_z on Twitter got his hands on the Japanese 2018 Generations book and has stated a quote from one of the Takara designers developing the Beast Wars Masterpiece line. The Japanese text can be found in fellow Seibertronian Actar's quote below where he describes his interpretation but the translation would be similar to this:

"Regarding the Beast Wars "Masterpiece" figures, I felt our first goal was to get to Dinobot, and now the next goal is (Beast Wars) Megatron, so I would like to do my best for that one."

This suggests that Beast Wars Dinobot was their first milestone/target to reach in this line and now that he has been accomplished, the next milestone would be Beast Wars Megatron, yessss. It definitely confirms that he is eventually coming and on their minds but it doesn't mean he is next. If the milestone interpretation is correct, we might even be seeing other Beast Wars MPs before Beast Wars Megatron. There are also other masterpiece figures in the works that could come out before, such as Trailcutter and Hoist. Let's just hope he comes with a ducky accessory when he does come out.

Below is the original quote discovered by our own Actar.

Actar wrote:According to a tweet regarding the new Transformers Generations 2018 book, there was a comment by the designers of MP-41 Dinobot:

Their first target for the BW MPs was Dinobot. Now, they're aiming for Megatron.

While this is not confirmation that Megatron will be next, the team has shown an interest in making one. 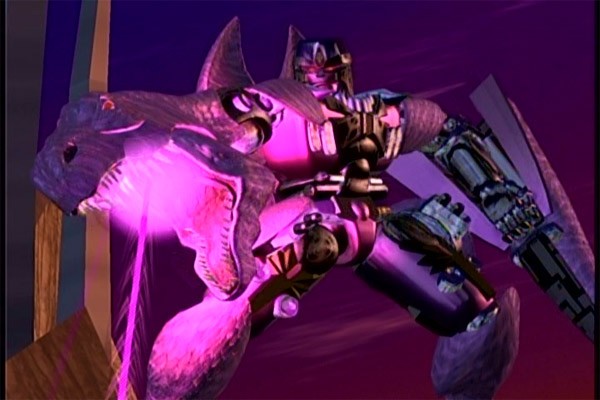 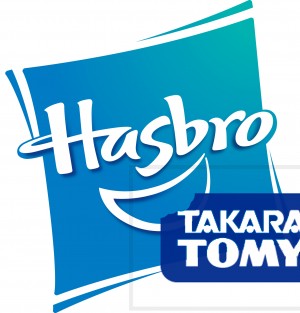 A preamble before the write-up: the original article is entirely speculative, and given that it was originally posted in July 2017 and we have heard nothing from either Hasbro or Takara Tomy since, please only consider it as such - speculation.

With that out of the way, you may be interested in reading an analysis over on SeekingAlpha concerning rumours of Hasbro acquiring Takara Tomy as part of itself (rather than the current partnerships they operate on certain franchises, such as Transformers), after Takara Tomy lost the license to one of its more lucrative products: Pokémon. The full piece is behind a register-to-read wall, but you can read the summary and the opening paragraphs below.

What do you make of this potential, but not at all confirmed or suggested anywhere else, circumstance? Would you be happy with the change? Let us know in the Energon Pub!


A few weeks ago, I had a conversation with an old friend of mine, a senior buyer at a large Japanese toy retailer, who asked me whether I had seen the announcement about Pokemon pulling its license from Takara Tomy (OTC:TKHIY) and giving it to Wicked Cool Toys Company as of July 2018. I said that I had, and the follow-up question was whether I thought it likely that one of the two large American toy companies would buy Takara Tomy. Japanese executives are not in the habit of asking flippant questions, and this one made me think that there could in fact something major be happening and meriting further investigation.

“Takara Tomy is buying RC2 and challenging the leading US and European toy manufacturers on their own turf. With this move the company is transforming itself from a local giant into one with a decent presence in all major markets and a viable competitor to Mattel, Spin Master and JAKKS. I have omitted Hasbro from that statement because there are ties between the two companies effectively ruling out competition between them.”

There was a solid reason why Takara Tomy was anxious to diversify away from its home market. Japan toy sales have been declining for since 2010 due to negative population growth, a trend that is unlikely to reverse itself in a hurry: 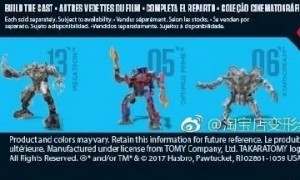 We have another couple of images courtesy of regular Weibo source user tf-factory /
淘宝店变形金刚改造工厂, featuring the same two characters we first saw when the new Transformers movie-verse toyline was first teased: Brawl and Megatron, who appear to respectively occupy the numbers 12 and 13. While we have yet to receive proper confirmation that these are indeed all part of the Studio Series line, we do have crosspromotion for an Optimus Prime (05) and a Starscream (06) in the same line too, all of which will also include a cardboard backdrop (probably the box itself, much like the case for the Transformers Prime First Edition figures and their little cardboard stand) with the words 'Studio Series' printed on it. Check out the grainy images of the two Decepticons below, and join the discussion in the Energon Pub! 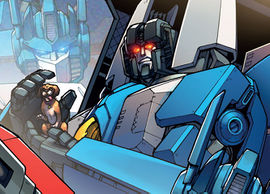 An anonymous source has posted the following listings online which are said to come from a Toysrus computer.

Below is the transcript of what was written and it will be followed by a quick analysis:

First off, the new movie line (the premier deluxes here have a different item number than the TLK stuff):

Some micelaneous new stuff, including an item from the bumblebee movie:

These can be verified by inputting the product codes at your local, US based, toys r us store.

The first set of listings, while having different names, match the latest price points for movie deluxes, voyagers and leaders. These are from the upcoming movie line which is releasing characters from previous movies, like a "generations" line but for the live action films. You can read more about that line in this article. This listing now helps us understand that what was written on the previously shown Brawl backdrop was "Studio Series".

We then have another listing for Igniters, which are assumed to be a gimmick centered line.

We also have a listing for a mask from the Bumblebee movie.

The lat two are truly new listings we know nothing of yet. The exclusive Thundercracker is the same price as the upcoming Power of the Primes Starscream so it could be an exclusive redeco for Toysrus. The very last listing is anyone's guess at this point but we should hear more of it soon, since it's street date is the first day of 2018.

Please note that these are street dates and not release dates, so while it can give us a good indication of when the toys can be put up for sale, there is no guarantee that they will be stocked at that time. 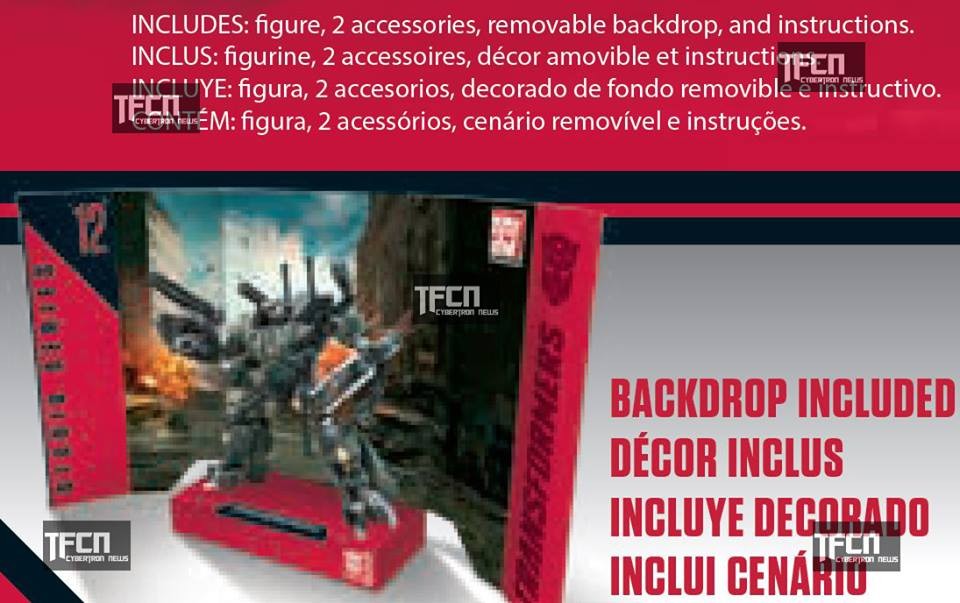 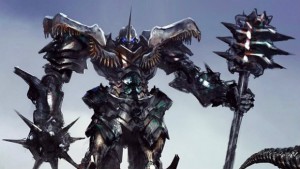 While we had early leaks of what looked like new movie toys, there were a lot of details missing and no sense of scale or if it was actually happening or cancelled. However, we now have better information regarding the once rumoured toys along with strong evidence showing that they will come out and more importantly, giving us an idea of their scale.

Yesterday, we were given listings for upcoming toys that match perfectly with the previous rumours of what could be included in the 2018 movie line, here are the listings:

By looking at the clear distinctions in price points, we have 3 classes, Deluxe, Voyager and Leader.

Using that and all the info we previously saw, we end up with this as the contents of the 2018 Movie Toyline (known so far):

From what we now know, the toys in this line should come with bases and backdrops. 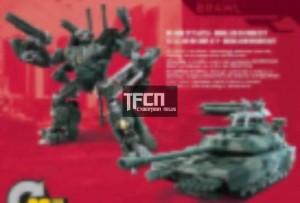 The TFCN Facebook page has some new leaked images for us. These are very low resolution images of Movie-verse Brawl and Megatron, the latter sporting his Revenge of the Fallen look. Low resolution has been used to mask photoshop jobs before so take this with a grain of salt for now. From what we can make out in these images, these appear to be part of a new line which includes a back drop and stand for the figure, much like the Prime First Edition toys.

These may be part of the new Movie Edition line we previously heard of but nothing is certain yet. 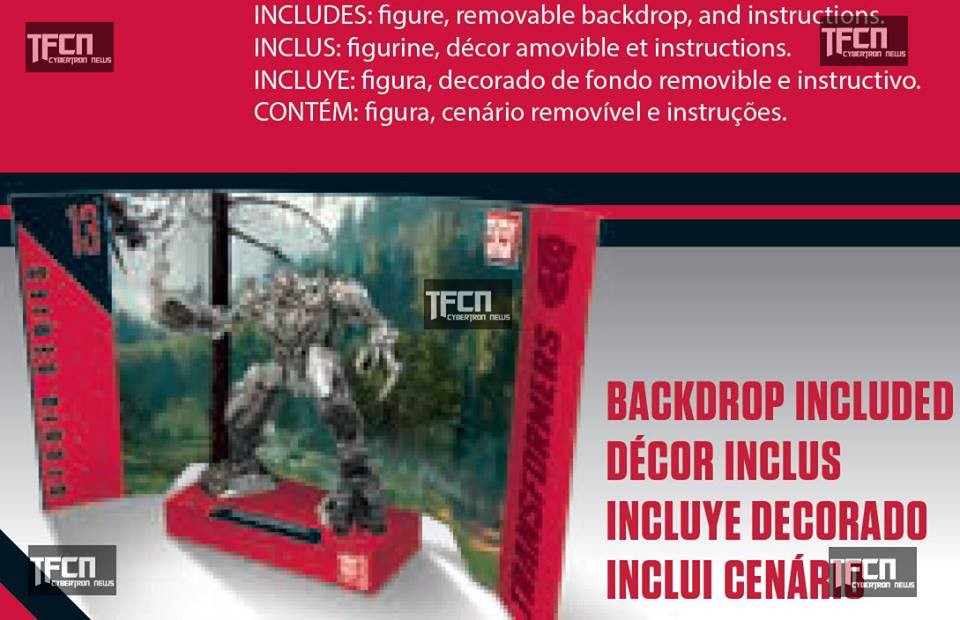 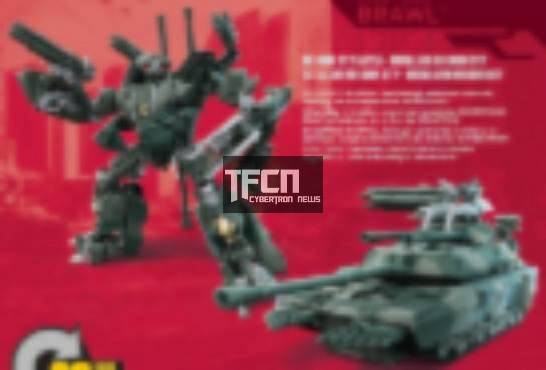 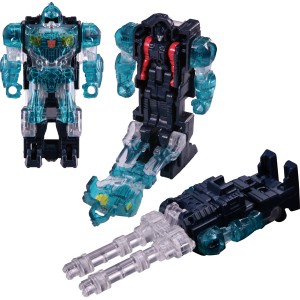 While almost all of the 2018 Power of the Primes line was leaked earlier this year, there can always be surprises still in store for us fans. Like a new Prime Master decoy suit, Waverider. The images of the decoy suit that might be added to LG EX' Grand Maximus release (seen below) does not match up perfectly with any decoy suit already revealed. Instead it looks like a retool of Cloudbusrt and bears resemblance to Waverider (Diver) so this might be our first look at an upcoming toy that wasn't even leaked. You will be the judge. Below is a quote from fellow Seibertronian JelZe GoldRabbit who describes what we might be seeing.

JelZe GoldRabbit wrote:The Pretender Shell is indeed an early release of a PotP toy, but one we never saw announced or even leaked. The detailing points towards the shell belonging to Waverider aka Diver: 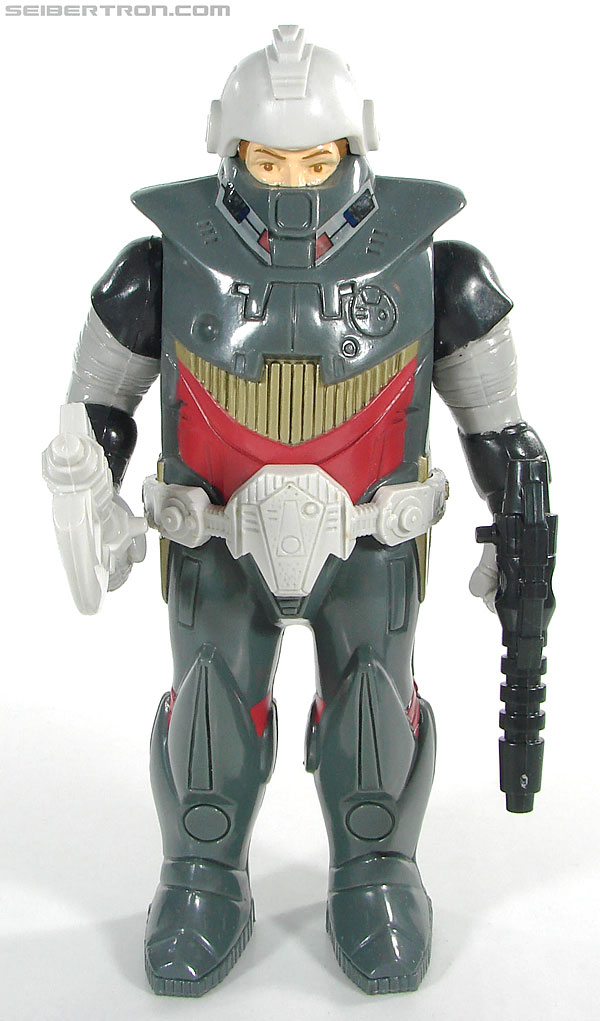 However the arms show the future Waverider toy will be a retool of Cloudburst: 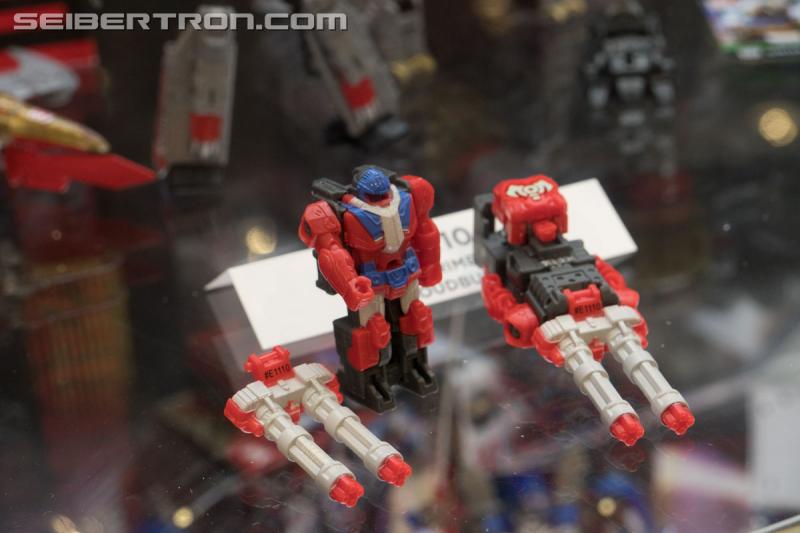 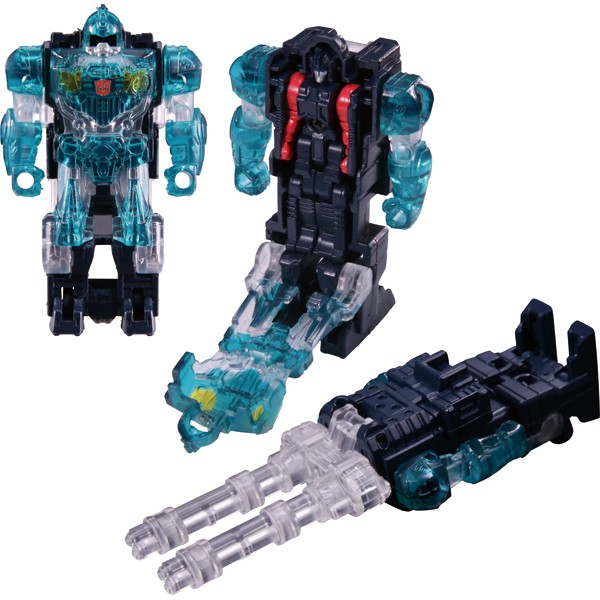 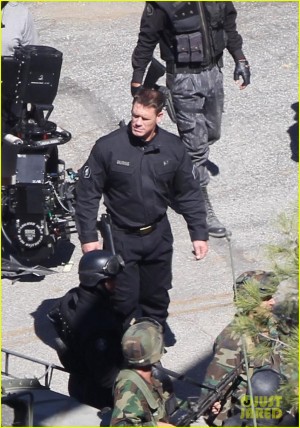 We have some more news from the current location of Transformers Universe: Bumblebee before moving to Long Beach next week, featuring some more agent-looking types - rumoured to be part of Sector 7 as previously seen in the news - Jorge Lendeborg Jr, Hailee Steinfeld, and John Cena (also via Just Jared and a number of Instagram and Twitter accounts) revealing the latter to be part of the S7 crew, and his character's name to be Burns. A reference to Rescue Bots, perhaps? Or just a coincidence? Join the discussion in the Energon Pub for more! 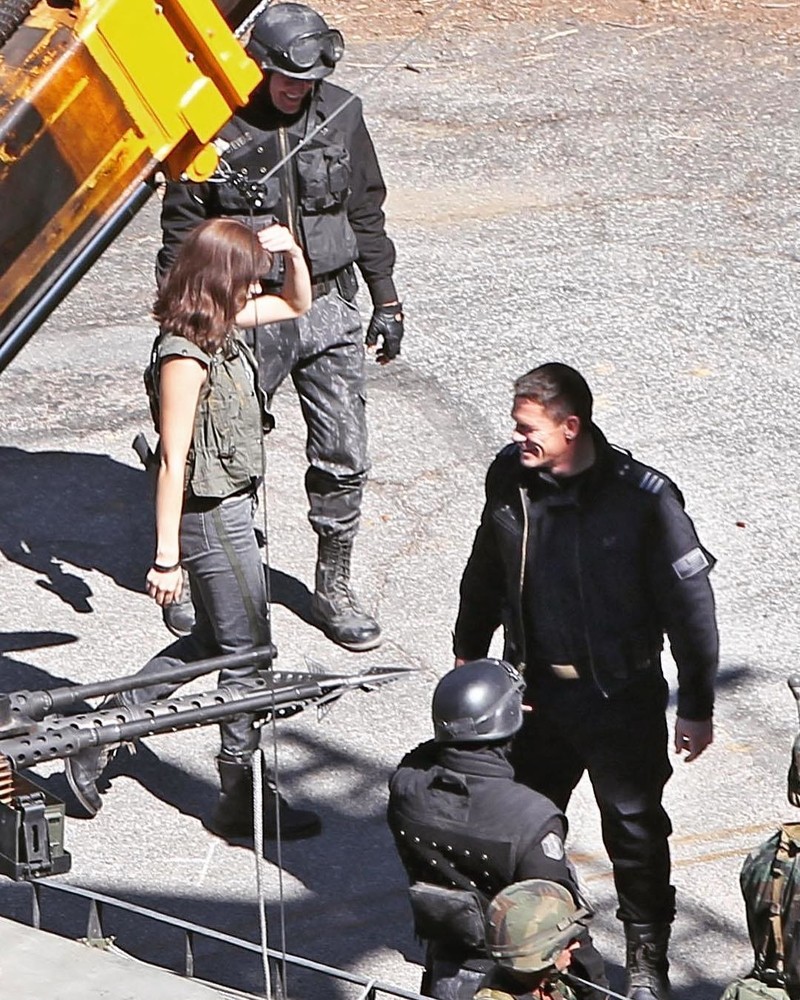 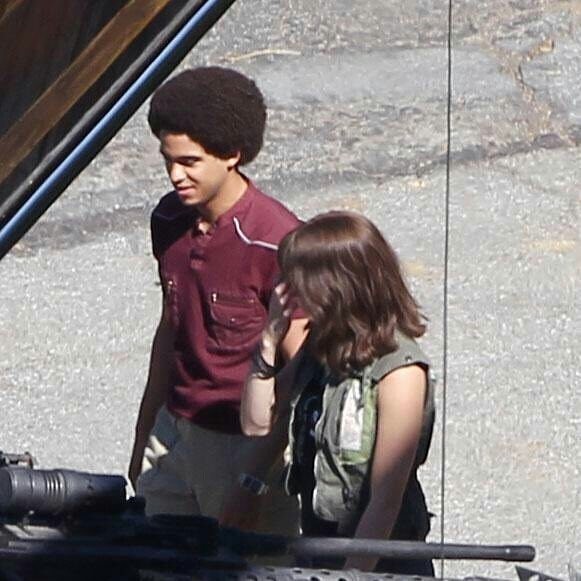 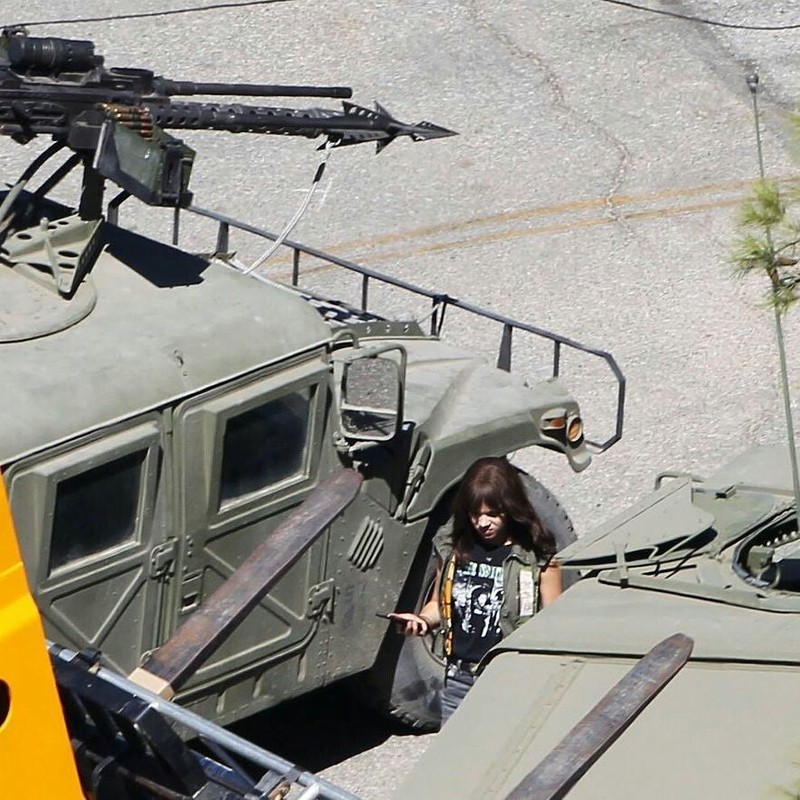 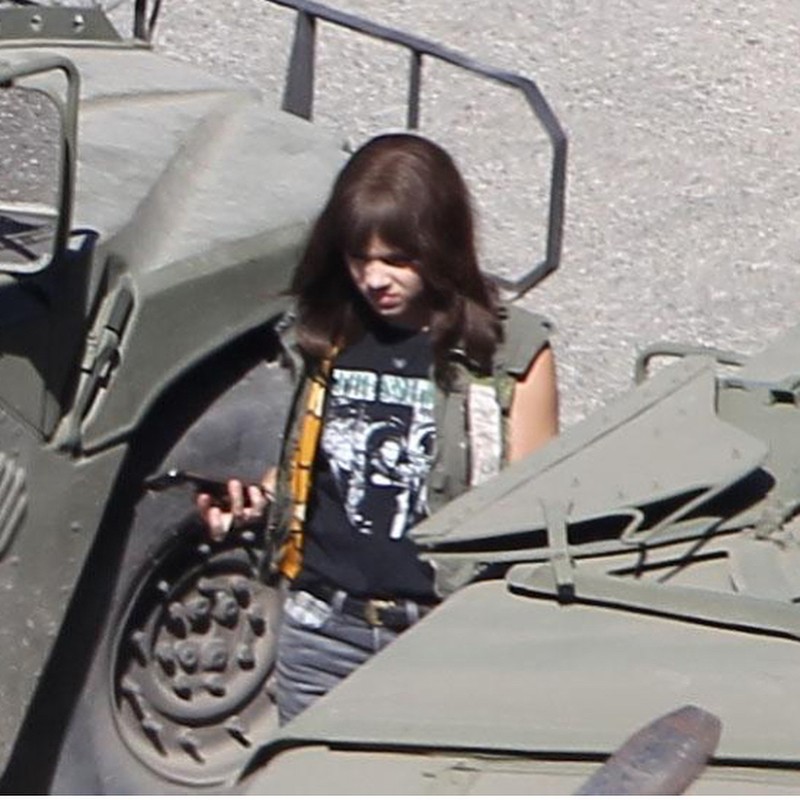 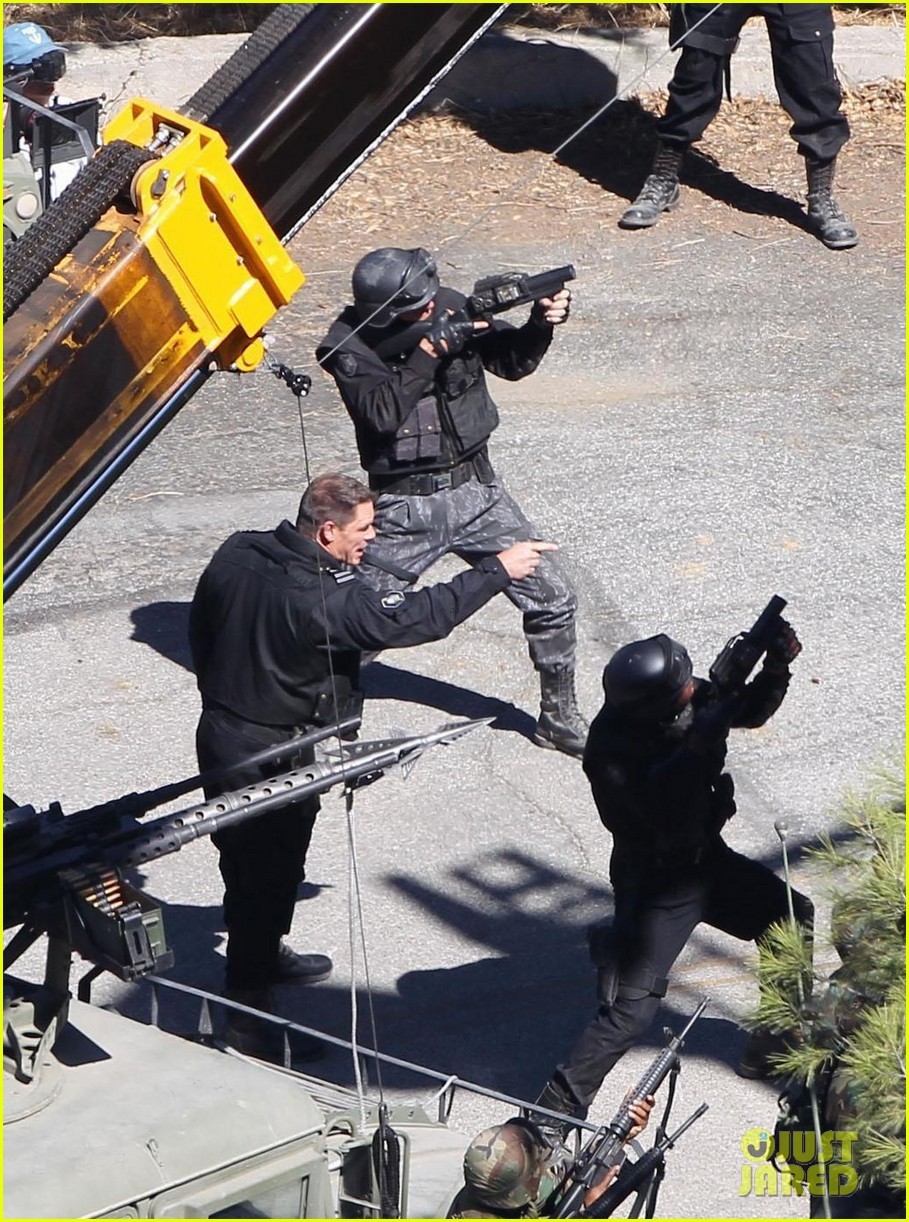 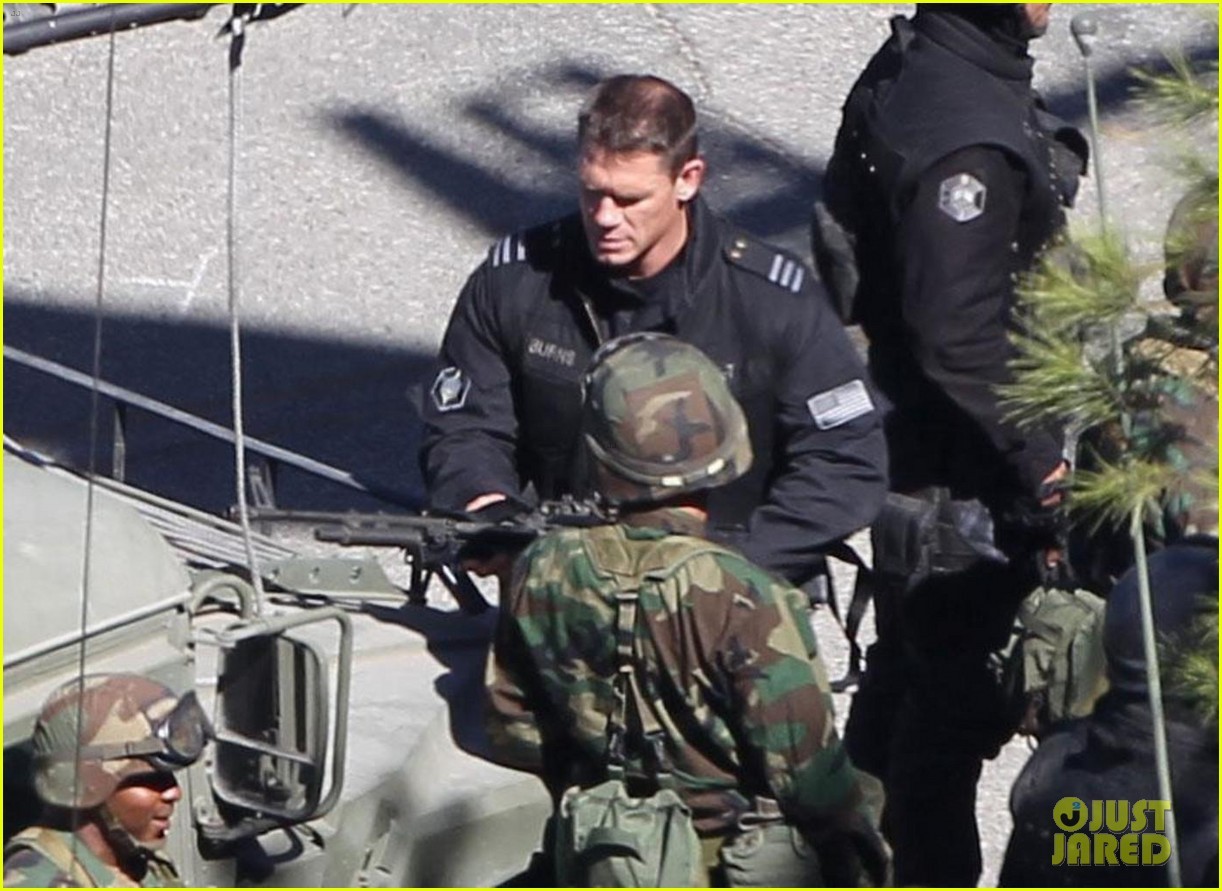 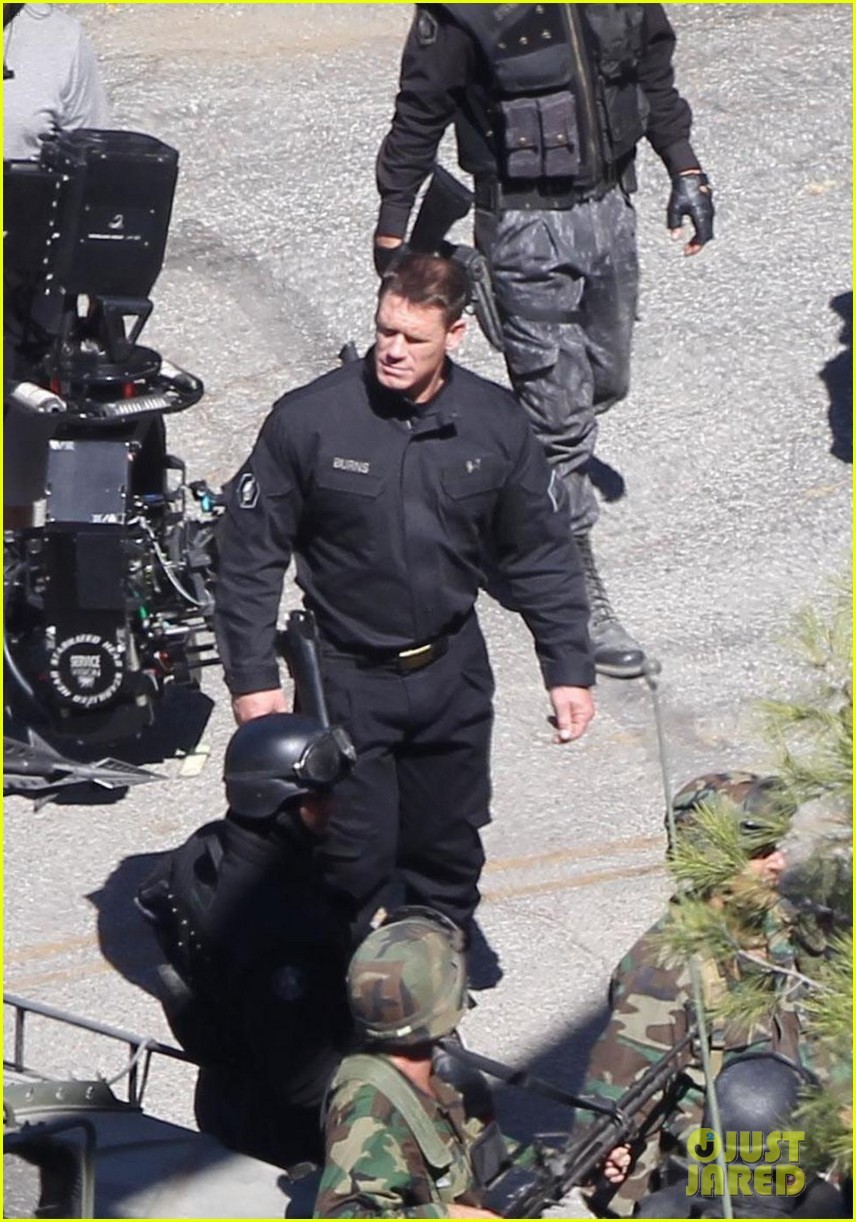 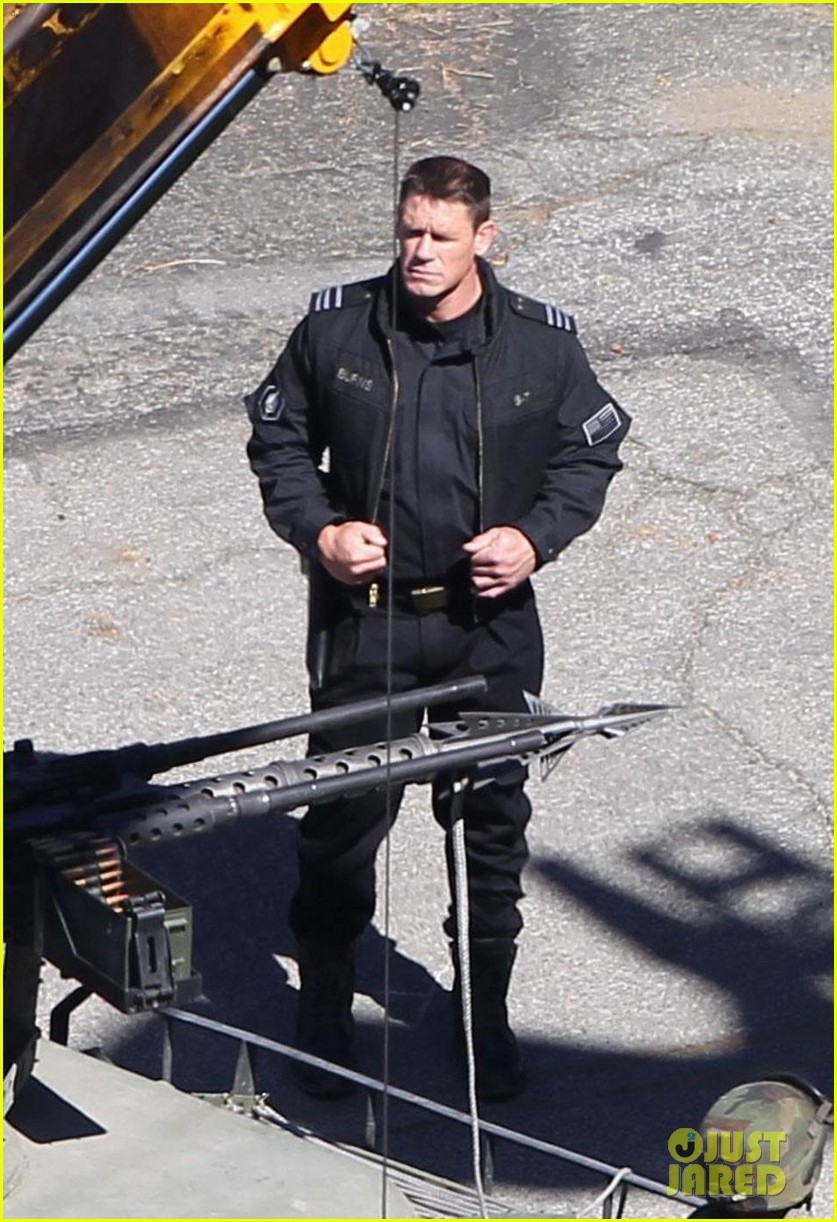 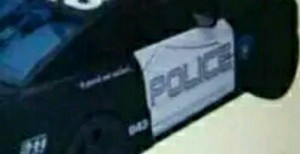 Fellow Seibertronian Actar has shared with us an image from Baidu user 呆萌小生 which allegedly shows us the first look at the Transformers Movie Masterpiece MPM-5 Barricade, in his early incarnation from the live-action movie series. You can take a look at it below, and join the discussion in the Energon Pub! 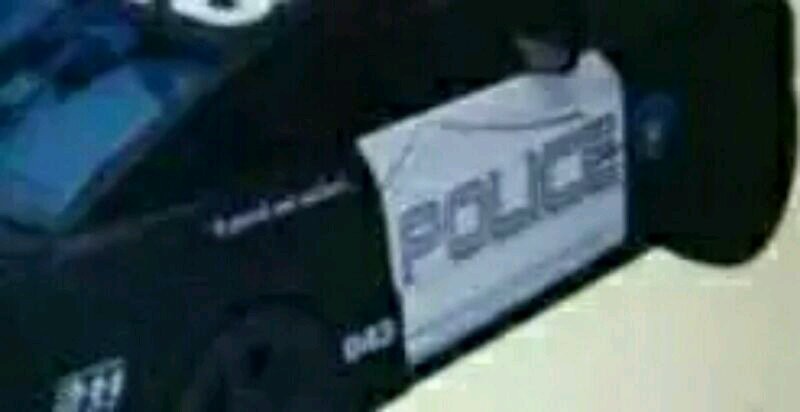 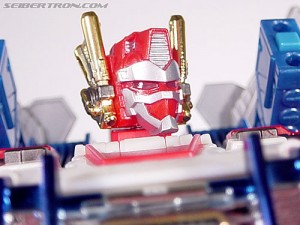 Anglophone audiences may remember him better as Omega Prime, the combined form of Ultra Magnus (God Magnus) and Optimus Prime (Super Fire Convoy) from the 2001 Robots in Disguise animated series - and one of the better engineered toys from the time, and arguably in the franchise. Does this possible announcement tickle your fancy? Let us know in the Energon Pub discussion thread! 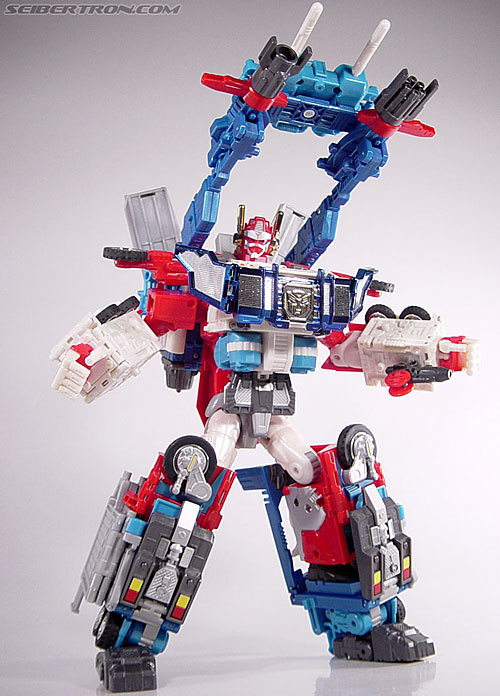