Don't miss out the chance to get your hands on G1 Power Cores this weekend! And find out the new bots!

Gather your Alliance members and take part in this weekend's event to win: 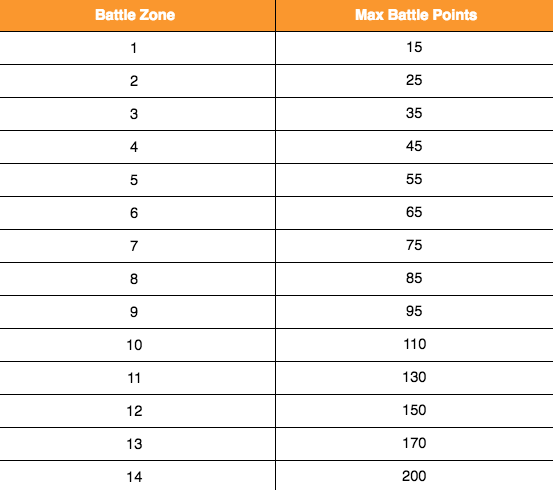 **Each Generation 1 Crystal contains one of the following rewards:

*Bronze, Silver and Gold G1 Chips contain a guaranteed G1 Power Core of the named quality for one of the following bots of your main faction:

Check our wiki to find out more about G1 Power Cores!

Who would have guessed Streetwise & Sinnertwin are the new recruits?!
Yes, they are joining the Earth Wars at the end of the current saga! 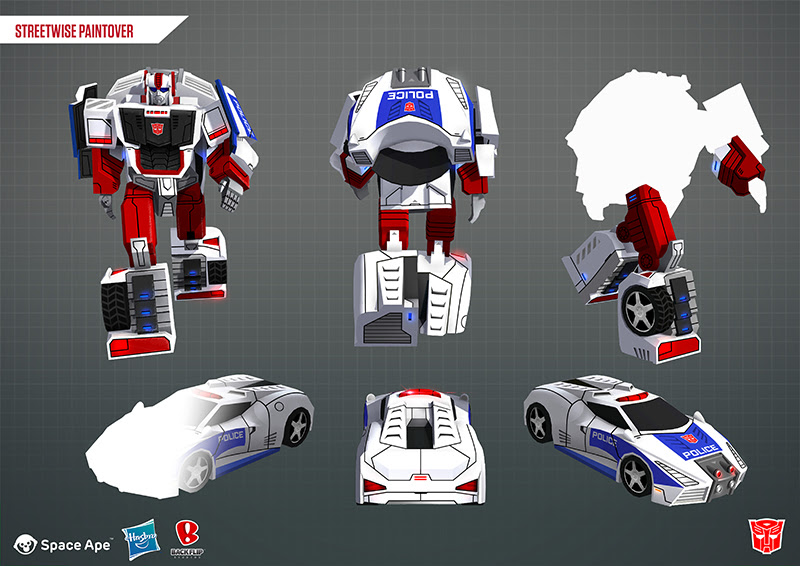 Streetwise (sometimes also known as Streetstar or Streetsmart) is a member of the Protectobots, a team of emergency, rescue and law enforcement bots. Other Protectobots already in the game are Hot Spot and First Aid. They were designed to protect humans from the Combaticons team that can combine into Bruticus.

In the case of Streetwise, our design was informed by the car whose design we thought looked really slick in the Generations Combiner Wars toyline. 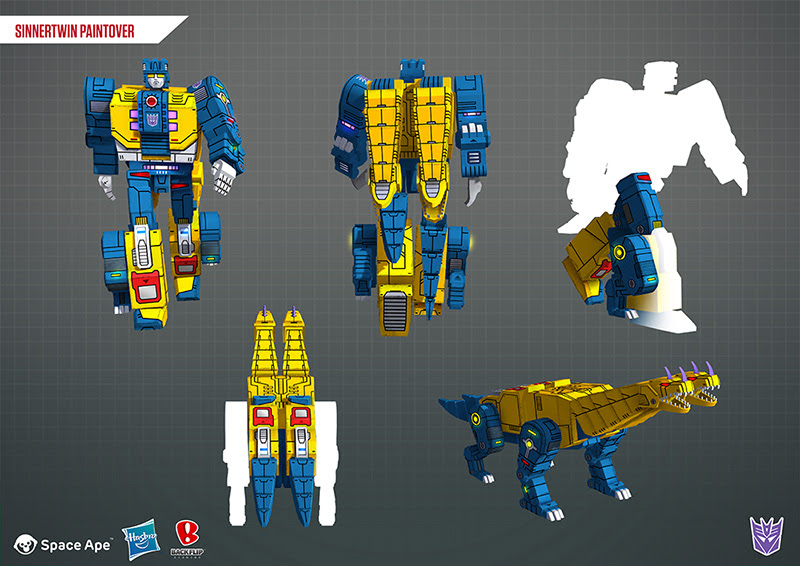 Sinnertwin (sometimes also known as Twinstrike) is a member of the Terrorcons, a team of positively insane and exceptionally cruel Decepticons. They all have personality disorders and Sinnertwin’s resides in his sadistic nature when it comes to killing. He is the fourth Terrorcon to join the game after Hun-Gurrr, Cutthroat and Rippersnapper.

Our design for the game was also inspired by the Power of the Primes toyline.

Here is the issue reported that we've been investigating:This is just an example of the reports that we've received from you and we continue to work hard to improve your experience with the game every day.

The following bug fixes and balance update are coming to the game!

King Starscream has summoned two new recruits to join his Cybertronian army. They are ready to fight and their identities will be revealed during the next stream!

Join Deb, Ioannis, Fabien and Jairo who will be talking about game improvements, new features, upcoming bots and more!

Next stream will be LIVE Thursday, January 24 @5pm UTC! 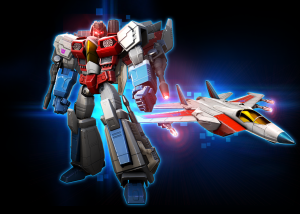 Courtesy of fellow Seibertronian Shauyaun, we have an update from Kabam! Studios' Forged to Fight Transformers mobile game regarding a new full addition to the game: The Chosen One, Supreme Ruler of Cybertron - Stascream himself! Read more about him, and check out the slick artwork for the head Seeker below.

BOT INTEL REPORT – STARSCREAM
Add Starscream to your ultimate squad August 24th at 10AM PDT
ABOUT STARSCREAM:
Faction: Decepticons
Class: Tactician
Megatron’s notoriously treacherous Decepticon Air Commander. Starscream’s ambition and resilience is legendary but his lust for power often backfires, earning him scorn, ridicule,and the odd laser blast from Megatron. He dreams that one day he will be called Lord. Lord Starscream.
STATS AND ABILITIES:
2-Star:
Health: 1575
Attack: 132
Max Rating: 550
3-Star:
Health: 3866
Attack: 280
Max Rating: 1312
4-Star:
Health: 10048
Attack: 727
Max Rating: 3524
BASIC ABILITIES: NULL RAY, RANGED BONUS, ARMOR BREAK
Null Ray
Ranged attacks have 20~30% increase to Critical Chance.
Basic Ranged Attacks have a 100% Chance to Nullify an Armor, Melee, or Attack Buff. This does not affect Buffs from Modules, Masteries, or Boosts.
When an opponent’s buff is Nullified that bot takes 80~90% of attack as instant Shock Damage.
Passive
5% chance Starscream Evades Heavy Melee Attacks, because sometimes cowards do survive.
Heavy Attack
20% Chance to inflict Burn causing 40% of Attack as heat damage over 4 seconds.
SIGNATURE ABILITY
Nullify All Hope
Starscream’s cunning is without limits, eventually he will find a way to nullify any advantage an opponent has.
Starscream’s Null Ray has a 30%~70% chance to Nullify any type of Buff. This does not affect Buffs from Modules, Masteries, or Boosts.
SPECIAL ATTACKS:
Special Attack 1 – Air Superiority Complex
A sycophant’s vengeance at last.
80% Chance to increases Ranged Damage by 45~65% and Projectile Speed for 8 seconds.
Special Attack 2 – Cunning Treachery
He’s got you now!
72~85% Chance to cause a 50~70% Armor Break for 7 seconds.
Special Attack 3 – Null-Ray to Oblivion
Conquest is made of the ashes of one’s enemies.
Nullifies all Buffs from the opponent.
SYNERGY BONUSES:
Starscream’s Seekers – Ramjet
+5~15% Damage and 10~50% Armor Piercing for all Decepticon Ranged Attacks.
Sky Assault – Windblade, Waspinator
+7~25% Anti-Evade
STRONG MATCH-UPS:
Optimus Prime (MV1)
Starscream will be great against Brawlers like Optimus Prime, whose frequent combat buffs make them easy for this tactician to take down.
Sideswipe
Once Starscream has his Signature ability awoken be careful to consider what bots frequently activate buffs.
WEAK MATCH-UPS:
Iron Hide
This bot rarely activates buffs, making him untouched by Starscream’s most powerful abilities.
Bonecrusher
This Warrior relies almost completely on Damaging Debuffs, something Starscream has no answer to.
RECOMMENDED MODULES FOR STARSCREAM:
Nightbird’s Mark
Increasing Critical Chance and granting the ability to Evade more types of attacks perfectly complement Starscream’s cowardly tactics.
EMI Module
Starscream relies on his Ranged Attacks to deal the most damage. Weaking the Ranged counter attacks from opponent’s will strengthen Starscream’s hand when facing raider 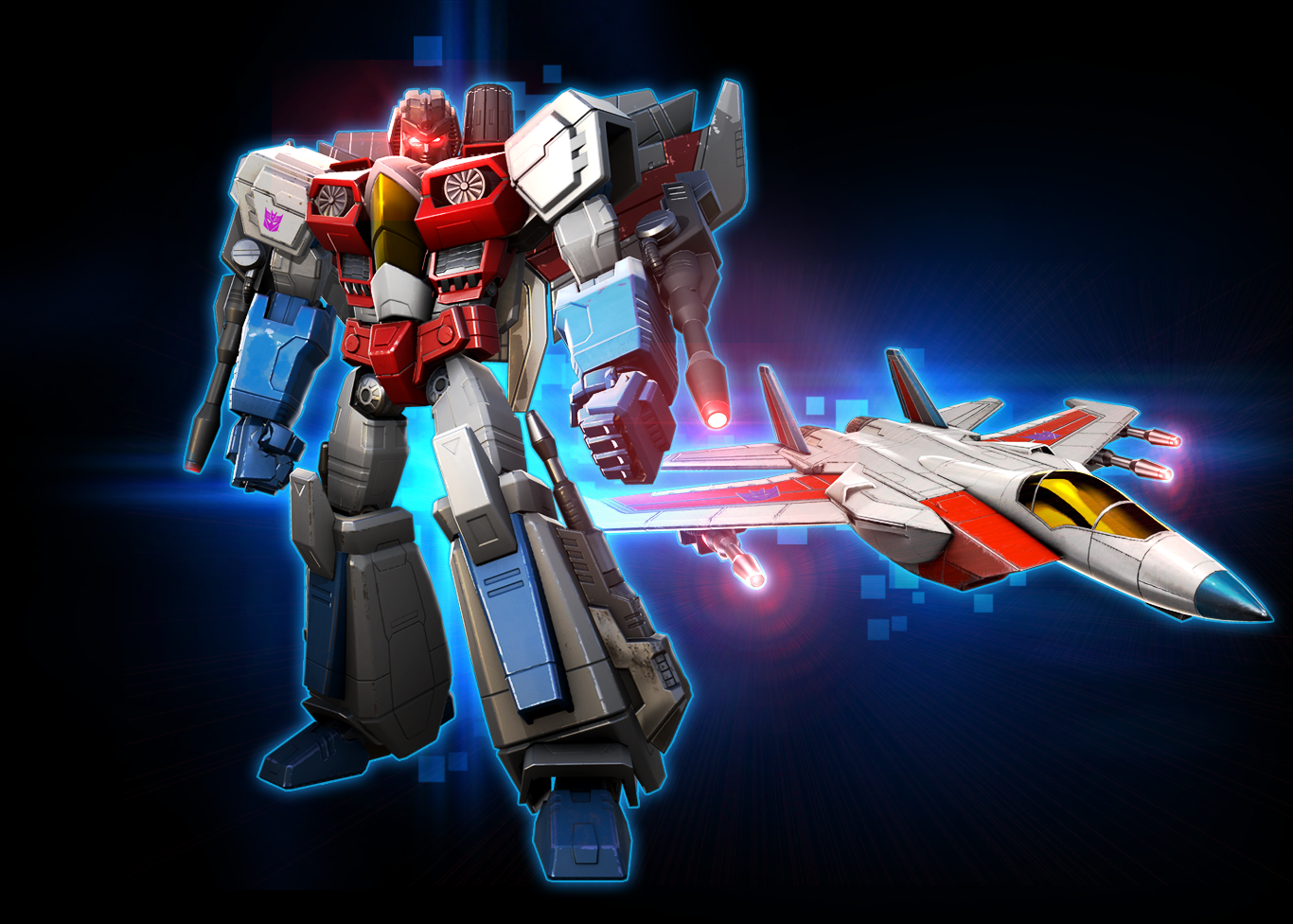 The day has come, fellow Seibertronians of the gaming persuasion, for Transformers: Devastation to burst into your consoles and devices and take up time, money and effort after months of previews and teasers! Check out below the Activision press release for the game, along with a brand new trailer!

TRANSFORMERS: Devastation moves at a breakneck pace: rocket through danger in vehicle mode before bursting into robot mode to unleash a barrage of close-quarters combos and blaster fire. Tackle the game’s gripping single-player campaign and 50 highly challenging bonus missions with any of five playable heroes – OPTIMUS PRIME, BUMBLEBEE, SIDESWIPE, WHEELJACK and GRIMLOCK. Each of these characters can be evolved with new abilities, unique talents and more than 150 upgradeable weapons.

Brought to life with bold, cel-shaded artwork, TRANSFORMERS: Devastation features legendary TRANSFORMERS voice actors like Dan Gilvezan as BUMBLEBEE, Frank Welker as MEGATRON and SOUNDWAVE, Michael Bell as SIDESWIPE, Gregg Berger as GRIMLOCK, and Peter Cullen as OPTIMUS PRIME. As the fates of Earth and Cybertron collide, the noble AUTOBOTS must face off against the DECEPTICONS’ most ruthless champions in an original adventure from veteran TRANSFORMERS writer Andy Schmidt that expands the series’ ongoing Combiner Wars story arc.

TRANSFORMERS: Devastation is now available for MSRP $49.99 on the PlayStation®4 and PlayStation®3 computer entertainment systems, Xbox One, Xbox 360, and Windows PC via Steam. It is rated T (Teen) by the ESRB. For more information, please visit www.TransformersGame.com and www.facebook.com/TransformersGame.

Headquartered in Santa Monica, California, Activision Publishing, Inc. is a leading global producer and publisher of interactive entertainment. Activision maintains operations throughout the world. More information about Activision and its products can be found on the company's website, www.activision.com, or by following @Activision.

PlatinumGames Inc. is an independent entertainment developer based in Osaka, Japan, dedicated to making high-quality, next-generation games for a variety of hardware platforms. Under the slogan “Taking on the World as the Representative of Japan,” PlatinumGames works hard to deliver fresh surprises and new experiences to gamers all over the world. Official website: www.platinumgames.com.

Hasbro (NASDAQ: HAS) is a global company committed to Creating the World’s Best Play Experiences, by leveraging its beloved brands, including LITTLEST PET SHOP, MAGIC: THE GATHERING, MONOPOLY, MY LITTLE PONY, NERF, PLAY-DOH, TRANSFORMERS, and premier partner brands. From toys and games, television programming, motion pictures, digital gaming and a comprehensive lifestyle licensing program, Hasbro fulfills the fundamental need for play and connection for children and families around the world. The Company’s Hasbro Studios creates entertainment brand-driven storytelling across mediums, including television, film and more. Through the company's commitment to corporate social responsibility, including philanthropy, Hasbro is helping to build a safe and sustainable world and to positively impact the lives of millions of children and families every year. Learn more at www.hasbro.com and follow us on Twitter (@Hasbro & @HasbroNews).

©2015 Activision Publishing, Inc. All rights reserved. "PlayStation" and "PS3" are registered trademarks. "PS4" is a trademark of Sony Computer Entertainment Inc. All other trademarks and trade names are the property of their respective owners. 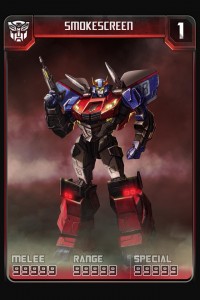 Gaming site Kotaku gives us a look at a few of the cards from the upcoming Transformes Legends (previously announced as Transformers Mobile) mobile device card battler from ngmoco.

Additionally thygriever of fellow Transformers fan site TFW2005 was on hand at PAX Prime this weekend, and has provided the following run down: