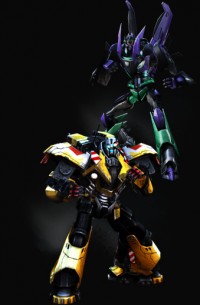 Seibertron member dedcat dropped by with a little update on the Transformers: Universe MMO Beta testing. Those who were lucky enough to be chosen for the Beta test are receiving emails with a link to a survey regarding computer specs and a few images. See the email and images below.


Commander, action is required of you. To take your next step towards the closed BETA program, we need some additional information. Please click on the link below to complete a brief survey and provide some information about your computers specifications.

This information is vital for BETA access; only those participating in the BETA survey will be able to participate in the closed BETA program. This data will only be used by the Transformers team and will not be shared with any third parties.

Transformers: Legends Mobile Device Game Now Available in the US

Mobage's Transformers Legends mobile device game is now available in the US! The game can be found in the Google Play store at the link found below. It's currently not available for Apple users, but that should change soon.

Here's some of the awesome artwork that is featured in the game: 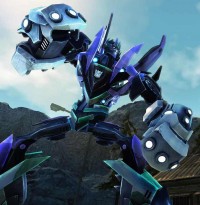 Leading independent games studio Jagex today announced the launch of its all new Transformers Universe website in preparation for the next stage of the free-to-play MMO’s release.

As well as featuring an entire redesign, the addition of forums and a news feed for all things Transformers Universe, the website will be the new and improved hub for the game’s BETA when it goes live in early 2013.

The new website and BETA registration can be found here:- http://www.TransformersUniverse.com


About Transformers Universe:
Transformers Universe is an action packed massively multiplayer war game that puts you at the heart of the biggest battle in-gaming Autobots vs. Decepticons. With dozens of Transformers’ warriors to choose from, only the smartest and most adept commander will be able to steer their team to victory. 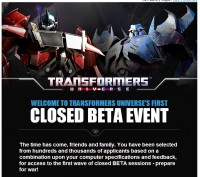 The time has come, friends and family. You have been selected from hundreds and thousands of applicants based on a combination upon your computer specifications and feedback, for access to the first wave of closed BETA sessions - prepare for war!

This first session will focus on an initial slice of combat features only. A core selection of 4 Transformer warriors per faction will be available to compete with on a team death-match map. More features and content will be added over successive BETAs.


Log in to TransformersUniverse.com ahead of the session and accept the non-disclosure agreement (NDA), a required part of BETA entry. This is a simple legal document designed to ensure the game remains top-secret in this testing and research phase.

To battle in the closed BETA log in to TransformersUniverse.com from 18:00 onwards on the 12th December. The first time you load the game it may take a little while. Ahead of the closed BETA launch you can check out the Game Guide to familiarize yourself with the controls and mechanics, and please make sure you have the latest copies of Java, DirectX and VSRuntime installed.

Thanks for your commitment commander - we await your report from the front lines.

Last month we reported that Jagex's Transformers: Universe MMO would be featured on the cover of EDGE magazine as well as receive an 8 page article discussing the gameplay within. That article is now available to read online. Click here to visit the EDGE website and view the full article, we mirrored the screenshots below.

Rather than use a traditional MMOG-style tabbed-targeting control system, which involves the player manually selecting targets, Universe adopts a more action game approach, locking onto the nearest enemy in the middle third of the screen. The aim is to keep the game fluid, while affording control over what you’re hitting, with aiming reticles and subtle zoom-ins creating what Horton calls a “Top Gun-ny vibe”. Feedback on firing itself is satisfyingly meaty and powerful, while a weapon-specific power bar lends an active element to combat. Some ranged weapons require time to acquire a lock; some have cooldowns; others, like Vanquish’s hammer, charge up and only deal top damage when the bar’s maxed out.

We move on to a contested area, Cooper switching to a smaller bot, which transforms into a red sports car. Situated under a huge dam is an Energon field, ripe for the mining. The aim for both the Decepticons and Autobots is to drop Energon probes into the ground and then remain within 10 metres of them to absorb the Energon they extract. The closer you are to them, the faster they deal it out, so the game’s about keeping position as both teams race to collect 1,000 units first. Complicating matters is the fact that the process can wake Terrorcons, which attack both sides, and that greedy players can simply keep the Energon they earn for themselves.

It’s a fast-paced brawl with a clear objective, one that earns the winning team the opening of a new portal for a short period that leads to the next battleground, a broken, burning city. As such, as each faction wins battlegrounds, they get to move on to the next in a progression that’s managed by two storylines, one for the Decepticons and one for the Autobots. It’s another product of Horton’s background with GTA: “We can’t do this game without telling a story,” he says. But it’s not simply the result of a mandate from Hasbro’s legacy with expressing Transformers through narrative-driven cartoons and film, and nor is it Horton falling back to home comforts. “Obviously, all the stuff I did with Sam and Dan Houser was about that, but what we’re aspiring to make is a suite of different battlefields that we need to give context to. I’m not knocking a Quake level, but we don’t know why they’re there. I think story’s very important for that.” 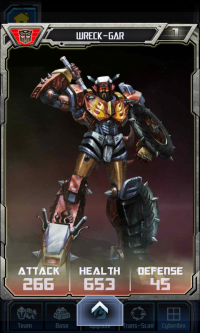 Mobage's Transformers: Legends mobile device game has been released overseas, Singapore and Australia at least. Our own site moderator Burn, who has downloaded the game, has shared the following gameplay review and screenshots.

Additionally the folks over on the Planet Iacon facebook page have posted 25 of the character cards with their stats. Check out the images mirrored below.

If you're outside the US the game may be available to you at the link listed below:
Google Play Store link

Burn wrote:So, game play is basic, as you would expect for a mobile/tablet game.

In missions you have a job to do, but it's basically press the scan button. This can result in either finding character cards, or you have to deflect attacks by Swoop or Ramjet (depending on your faction). You may also come across a Cache which gives you the chance to win rare cards. As the mission progresses you may also battle a boss whose weapon you can win. You earn XP points and Credits.

In Battles you fight other players. Well not so much fight, you line your cards up, winner is determined by stats. You earn XP and Battle Points

Cards you collect can be used for either trans-scanning your characters (you need to find both a matching robot mode and alt mode to trans-scan them together so they can transform), alternatively you can use them to upgrade existing characters (at the cost of credits) or sell for credits. Same goes for weapons.

There's the Space Bridge which you can use to request more troops (cards). There's a variety of ways to use the space bridge. Game credits (dish out the money), Battle Points, Ally Points, Bronze Warrior Medal (you get these when you level up) and Bronze Weapons Medal (not sure where you get these)

Friends playing? Add them as Allies. So far the only advantage I see is to "cheer" them and earn Ally Points for the Space Bridge.

It's a simple game, very beautiful artwork. Looks great on a 7 inch Samsung Galaxy Tab 2. My only complaint? You have to have an active internet connection.

Transformers: Fall of Cybertron: Best in Sound Design in XPlay Best of 2012 Awards

Transformers: Fall of Cybertron has edged out Diablo 3, Journey, Call of Duty: Black Ops 2, and Sound Shapes for Best Sound Design in XPlay's Best of 2012 Awards! Congrats to the team at High Moon Studios!

High Moon is very proud that we took home the gold for Best Sound Design with Transformers: Fall of Cybertron in the 2012 XPlay Best of 2012 Awards. Let's all give a Grimlock ROAR for that! 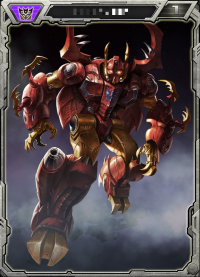 The official Transformers facebook page has posted another piece of card art from Mobage's upcoming Transformers: Legends mobile device game. They've blurred the name out so facebook fans can guess his identity, but I think it's safe to say most of us Seibertronians will instantly recognize him as the G1 Deluxe Insecticon Chop Shop!

TRANSFORMERS: Legends is coming soon! Can you guess who this character is? One hint: it's a Decepticon! Find out more at: http://www.transformers-legends.com/