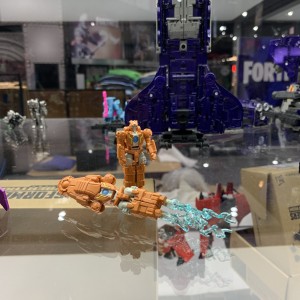 This just in from various sources like from our own NathanielPrime and Sentinel_Primal with images from Sabrblade but originating from Twitter user StrikerWang are images somehow taken of the Hasbro Transformers Siege reveals for #SDCC2019! Below you will see images of
-Astrotrain in train mode with his tinder converted to launch base
-Battlemaster Rung (!!!)
-Battlemaster Firedrive repainted deep silver
-Apeface from behind showing his beast mode head component
-Spinister
-Crosshairs (looking slick my old friend)
-Ratbat and Frenzy/Rumble
-and not last and not least the Micromaster 10 pack (not all members yet confirmed)
Enjoy the images and let 2019 ring (Rung?) as what will not doubt go down as one of the greatest years in Transformers history. Chime in with your thoughts in the forum and stay tuned to Seibertron for the ultimate in Transformers news! 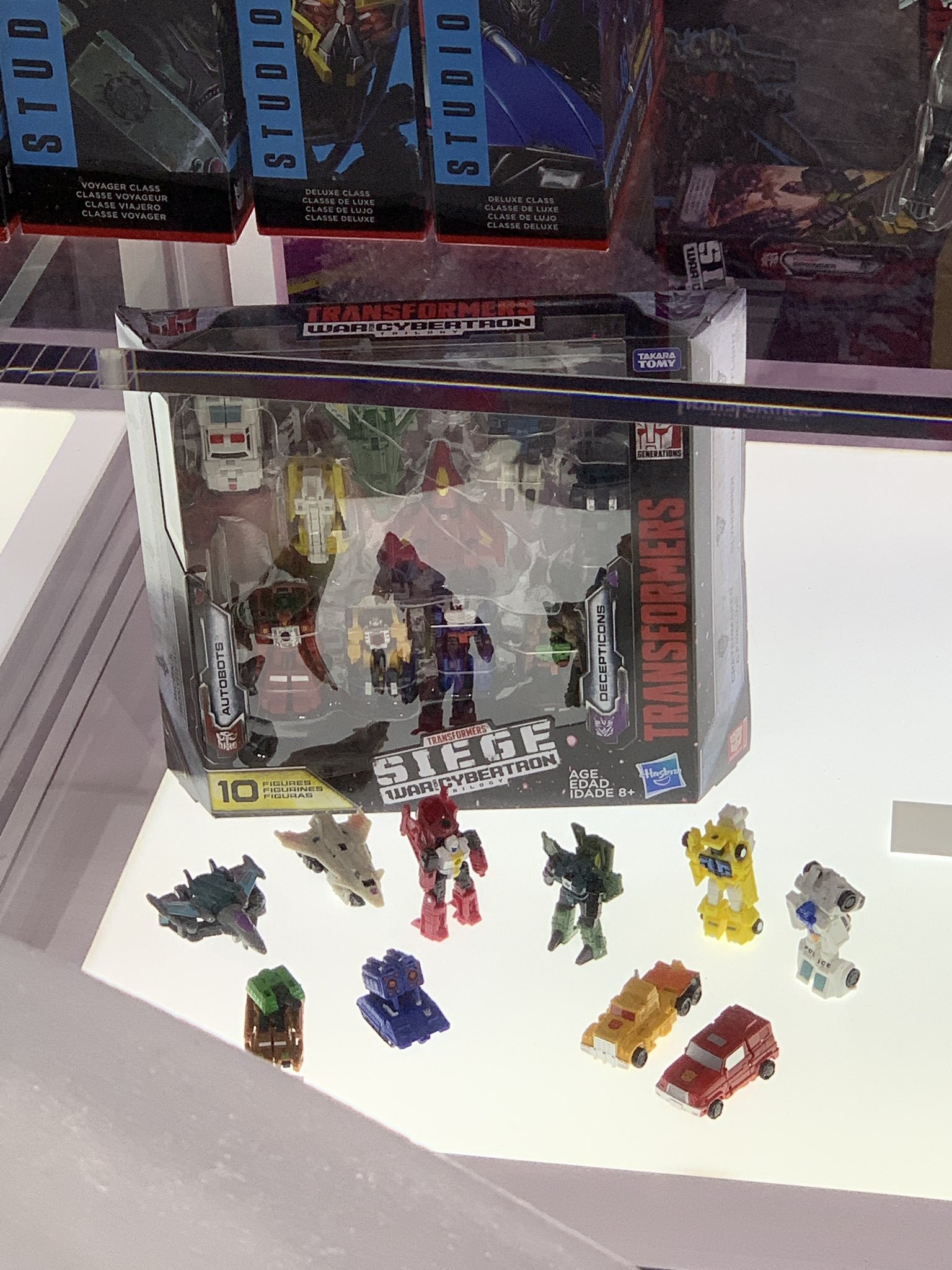 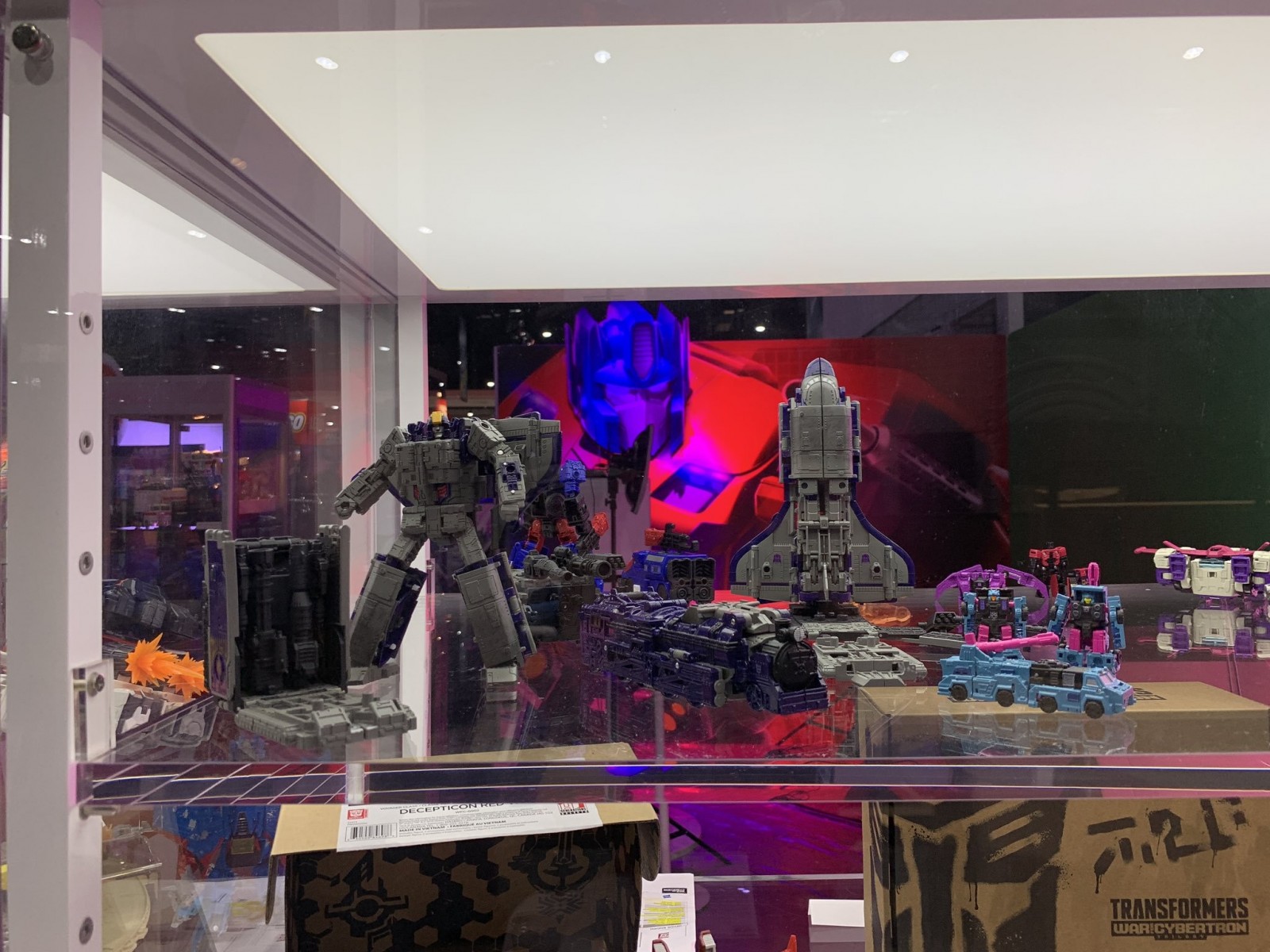 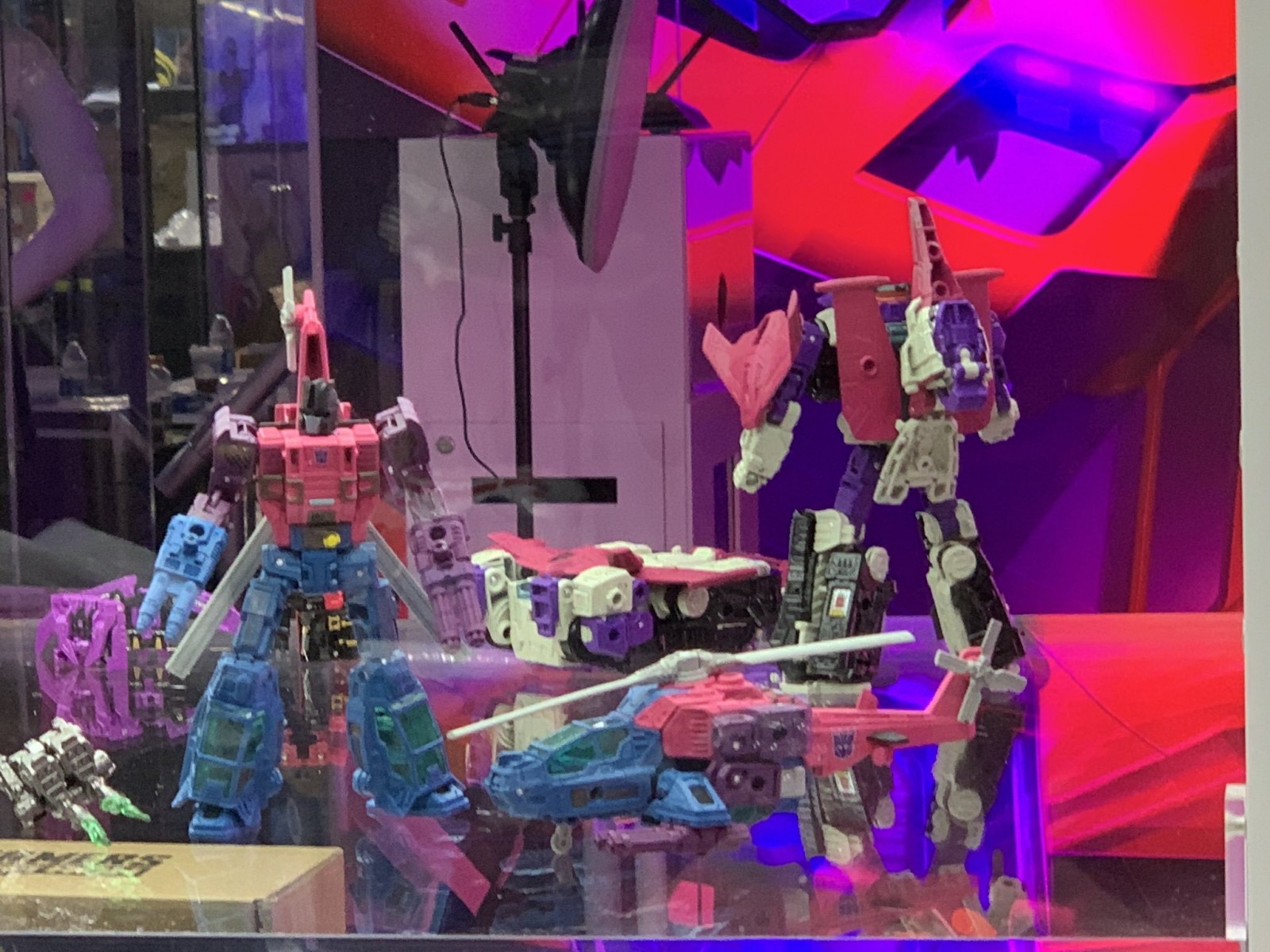 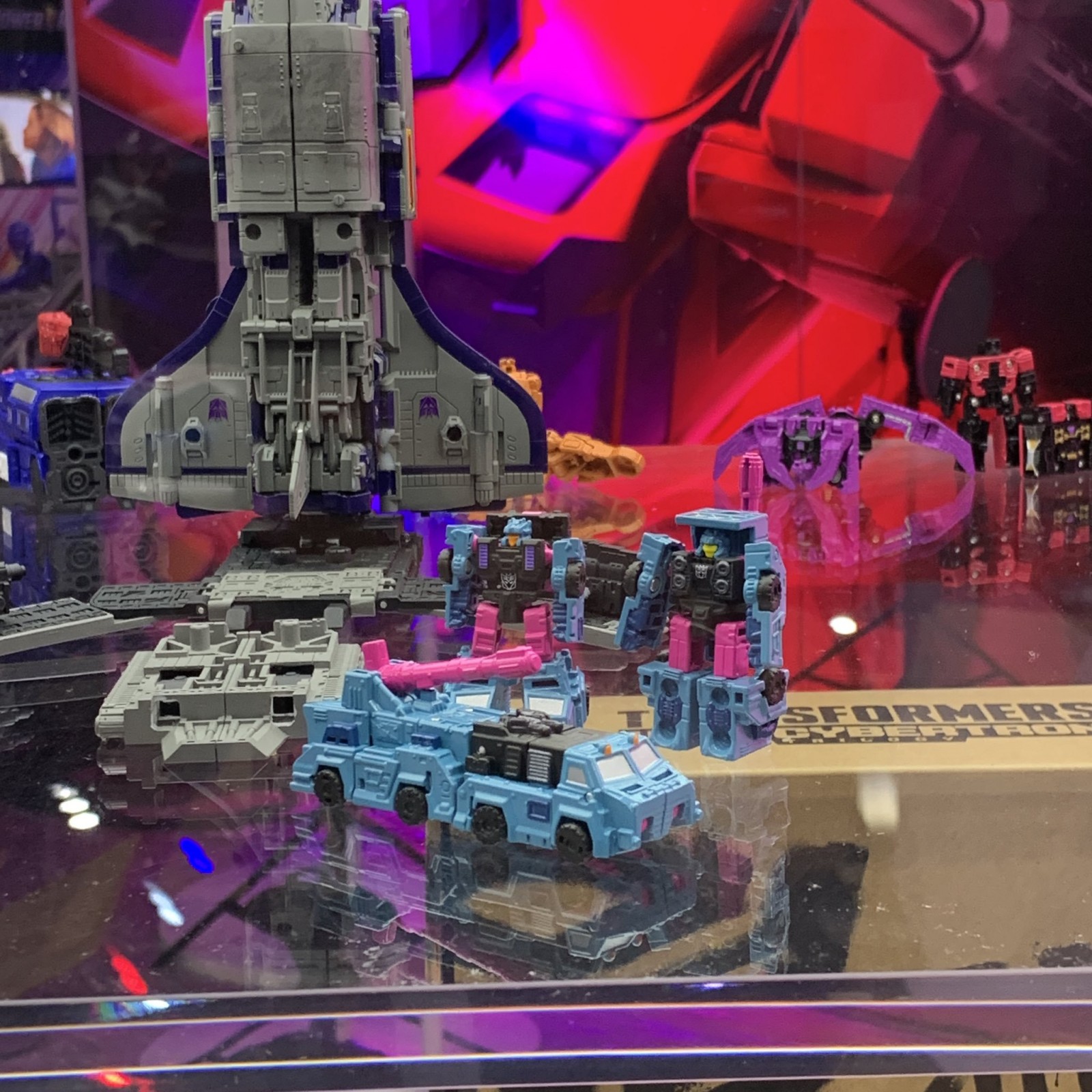 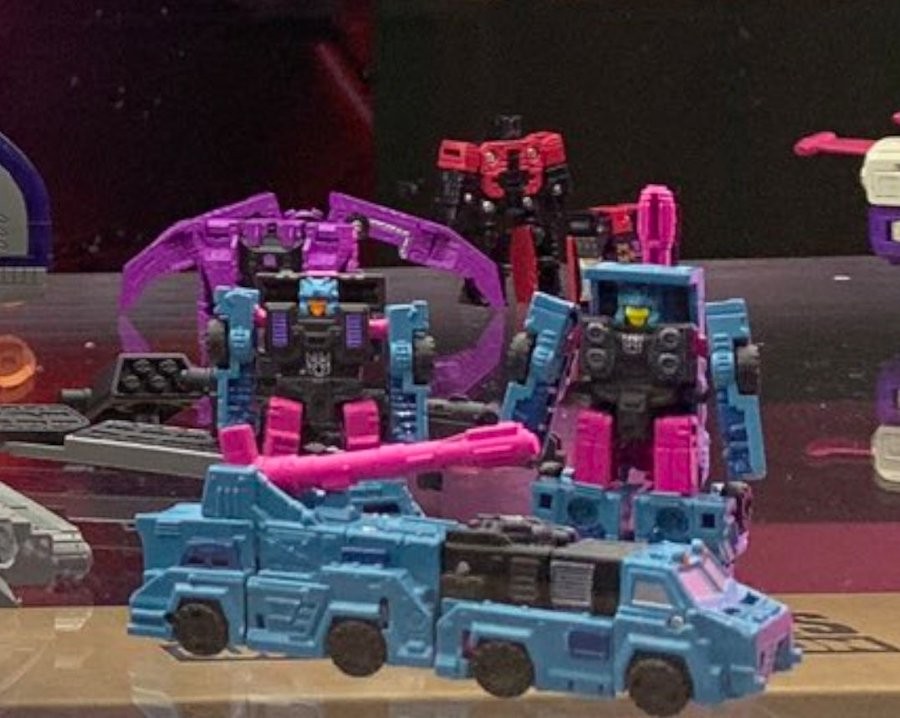 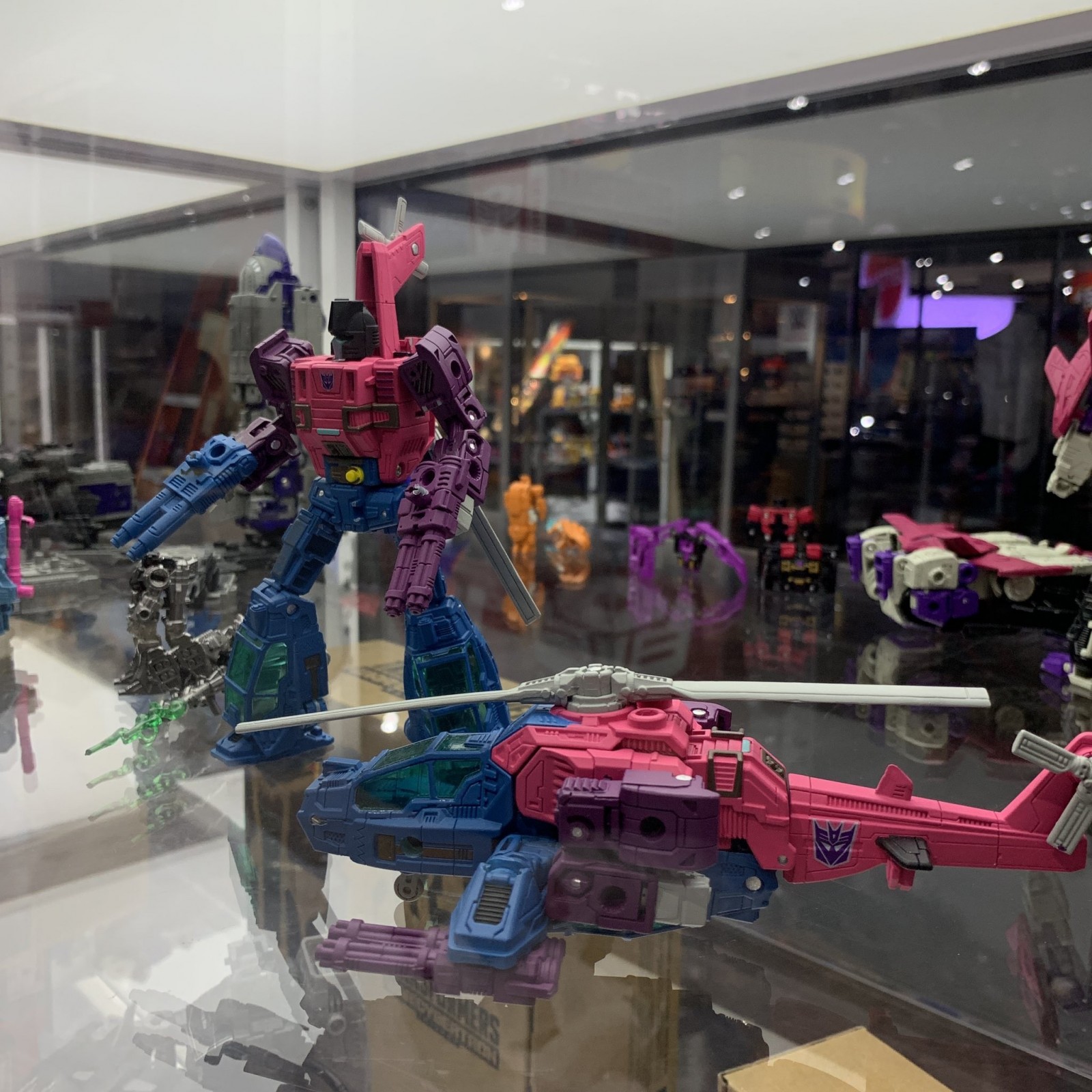 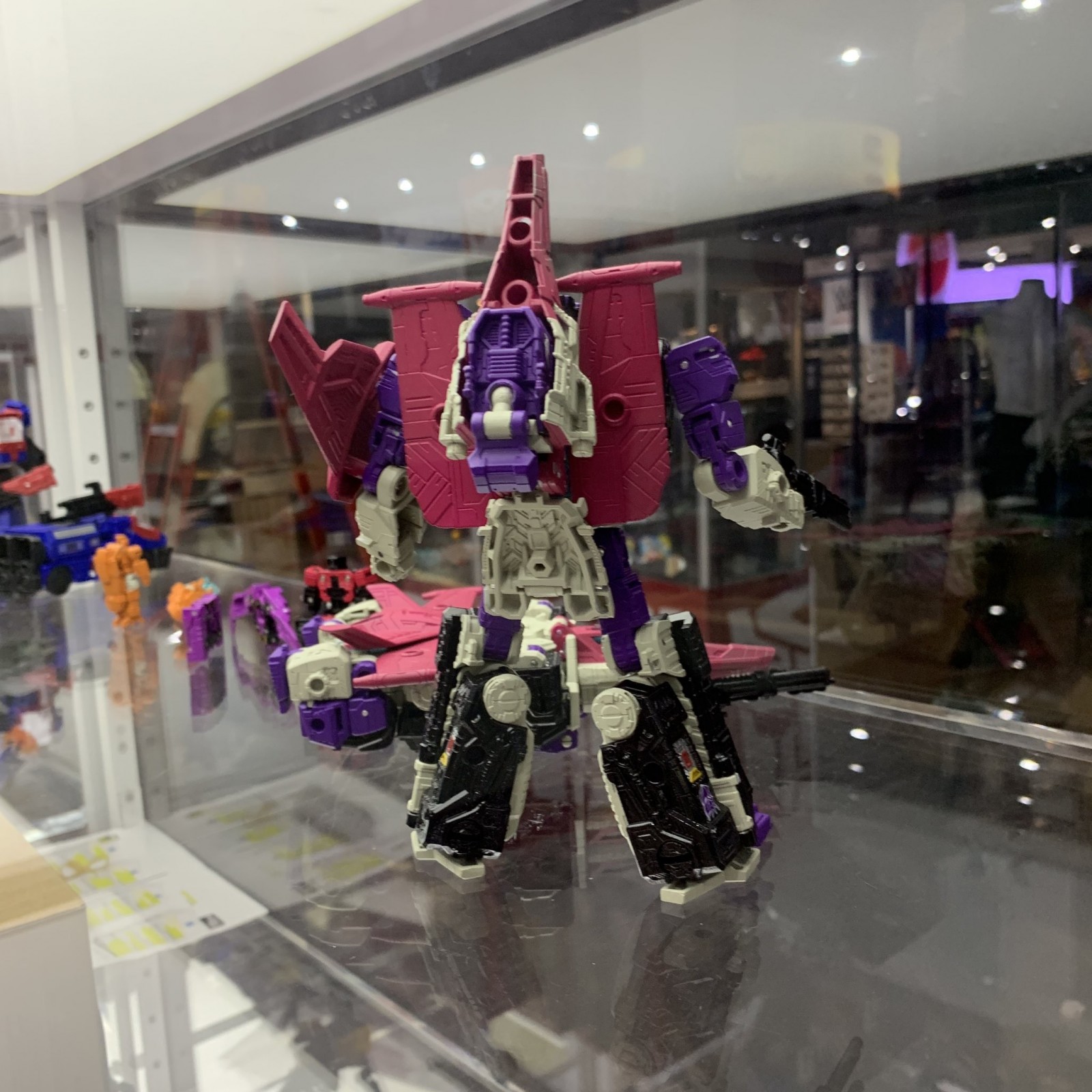 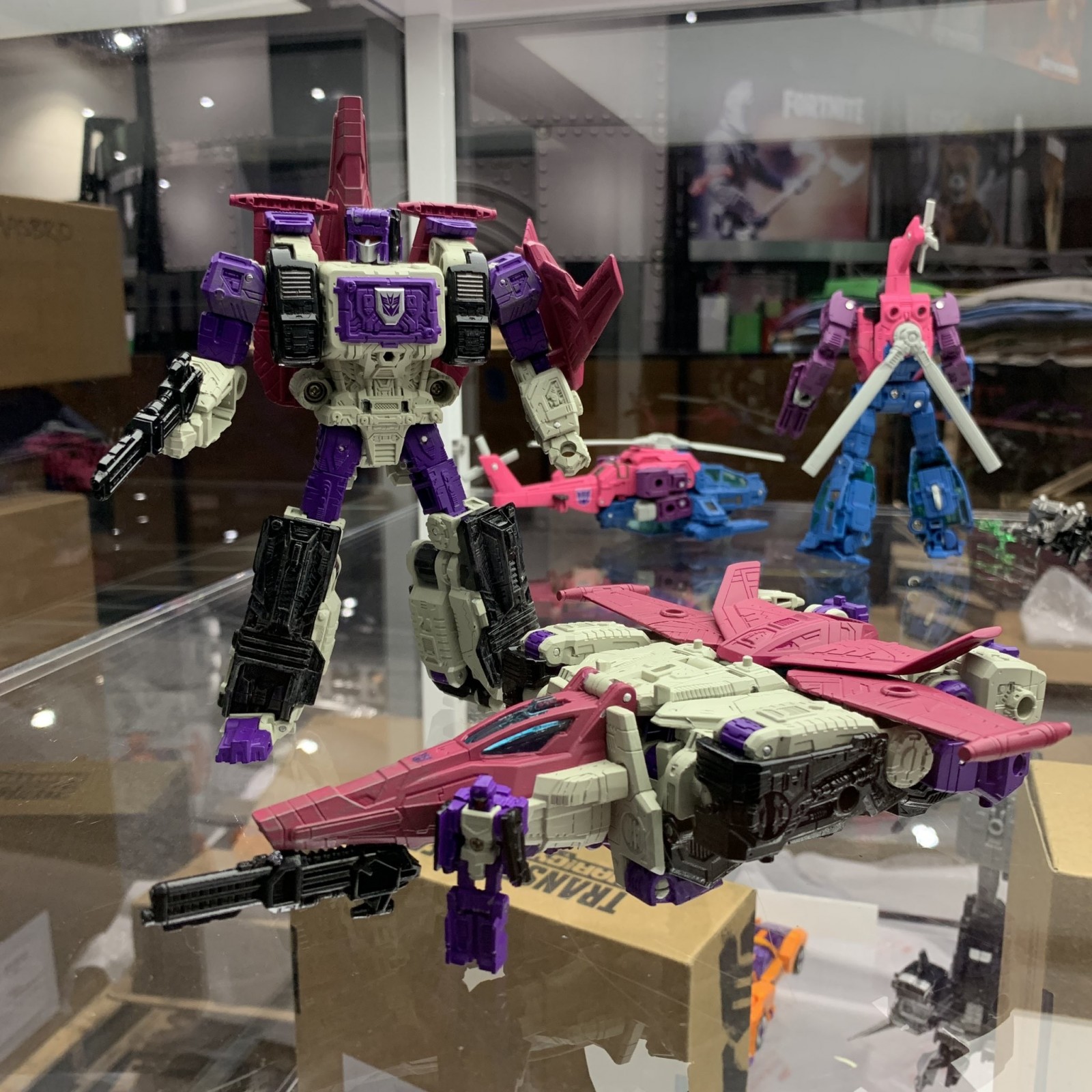 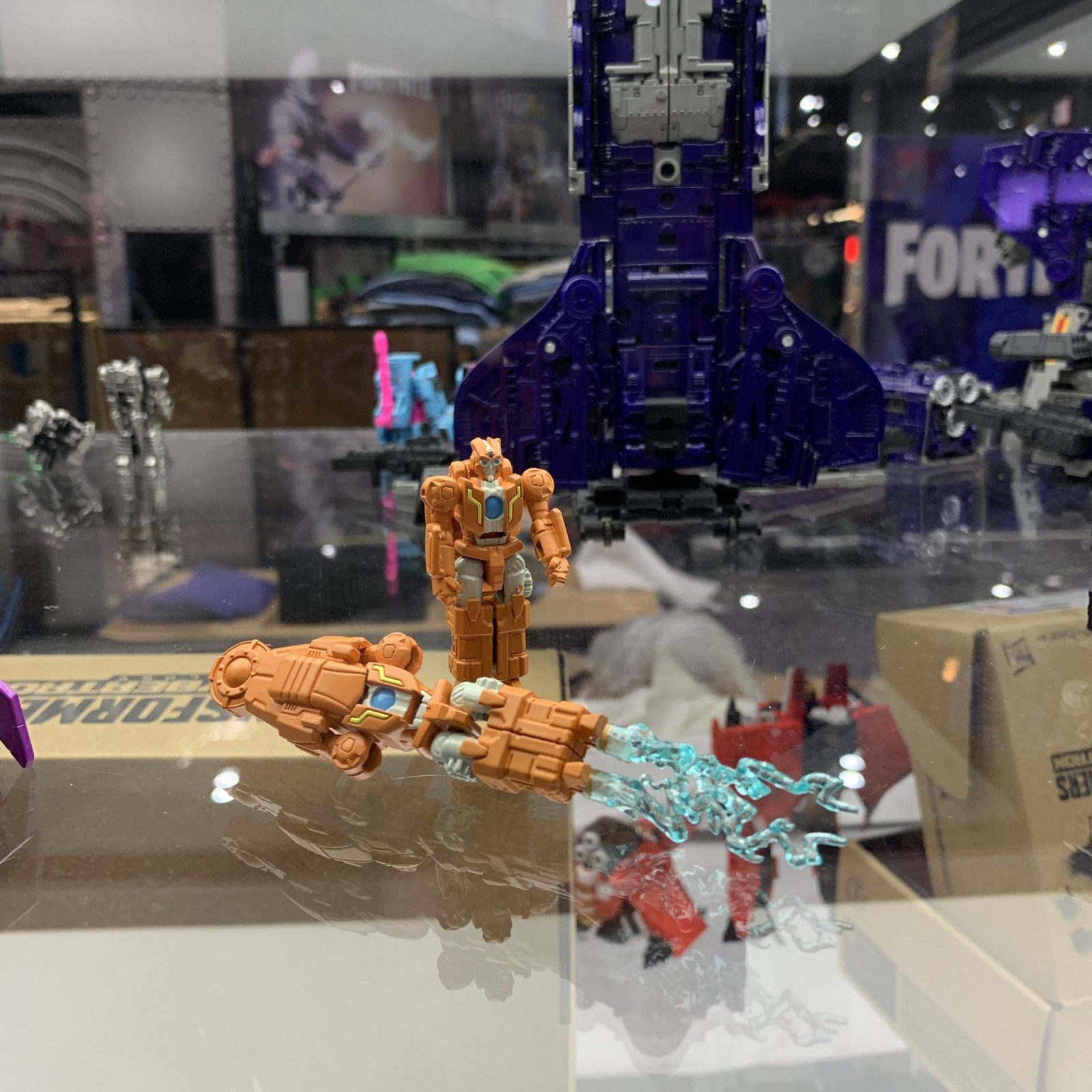 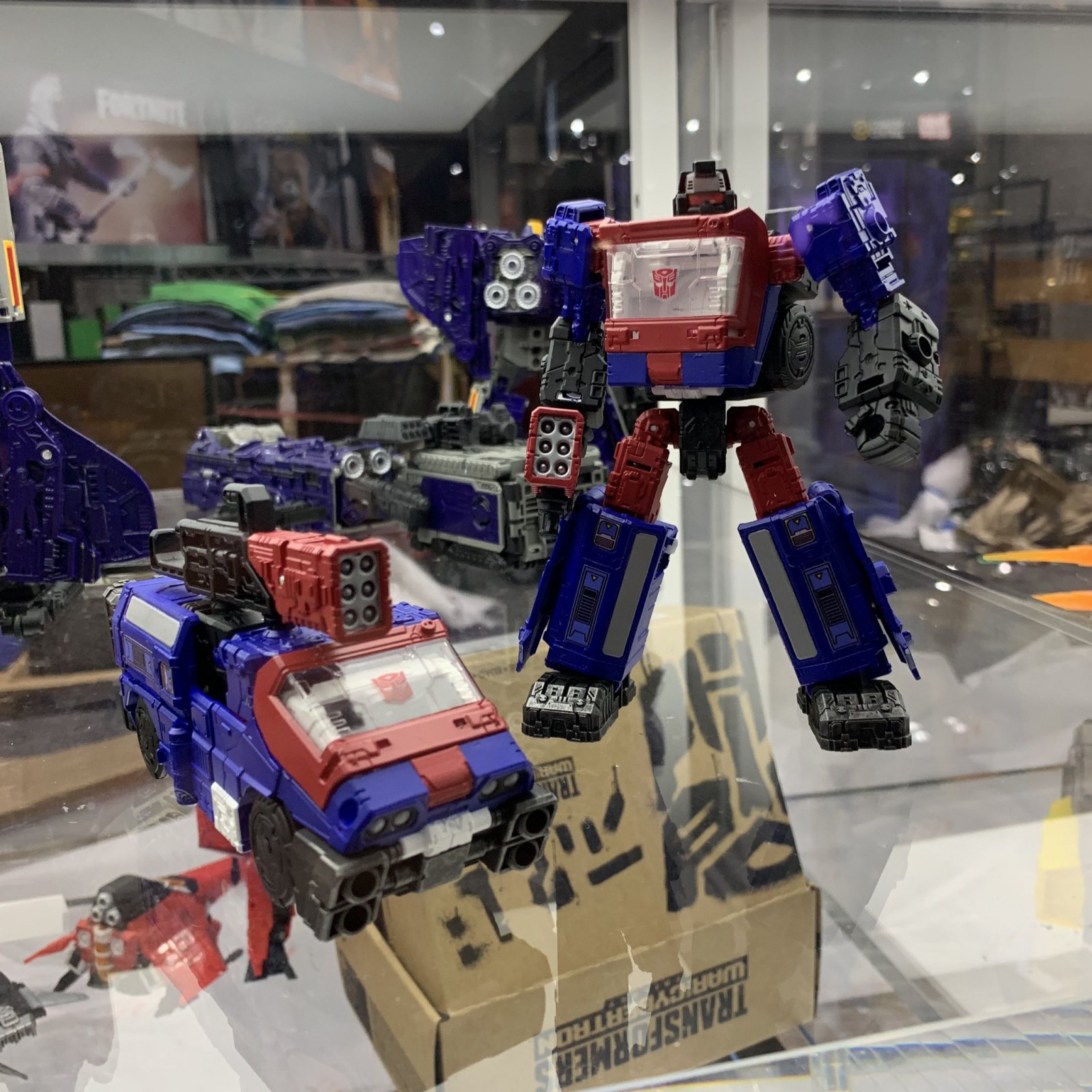 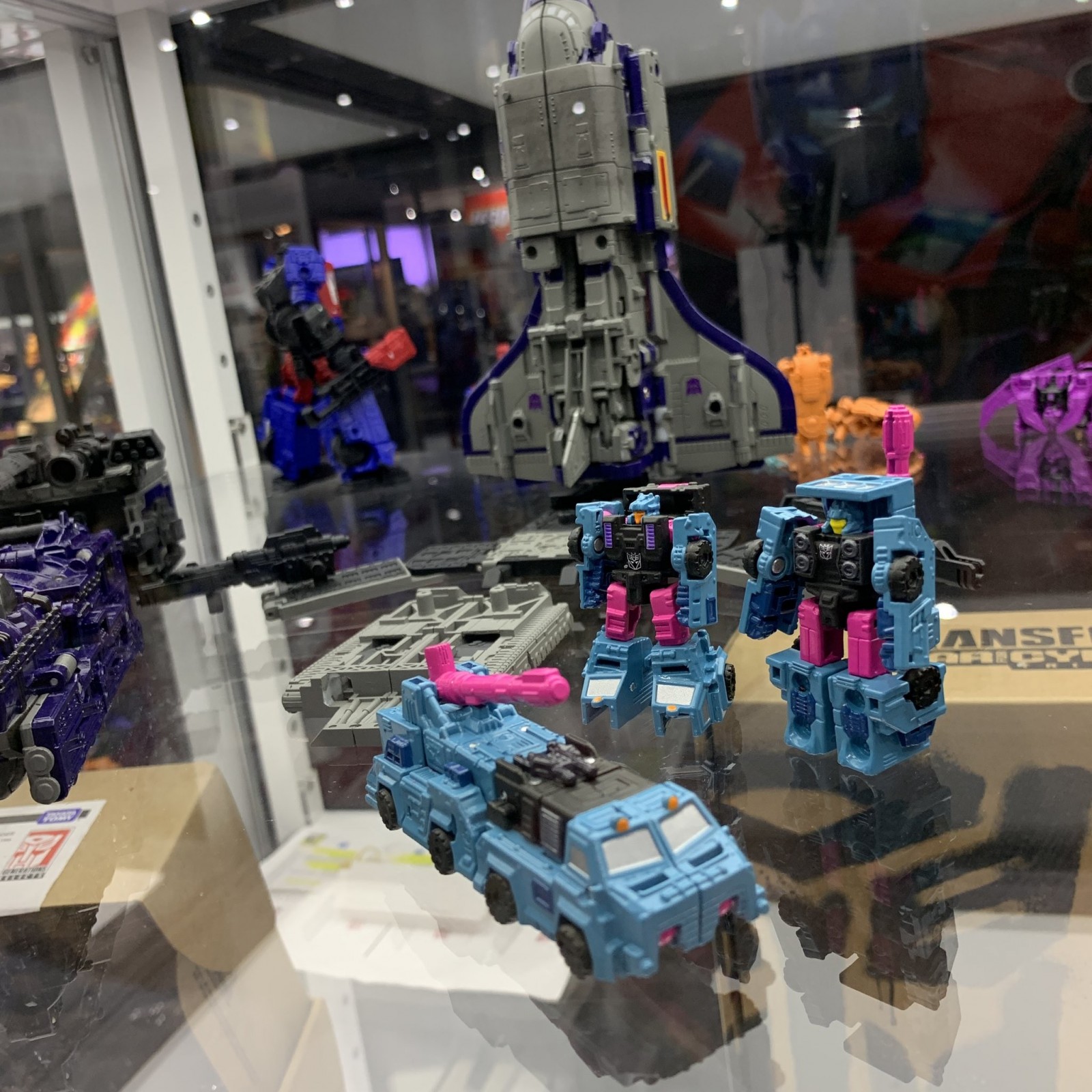 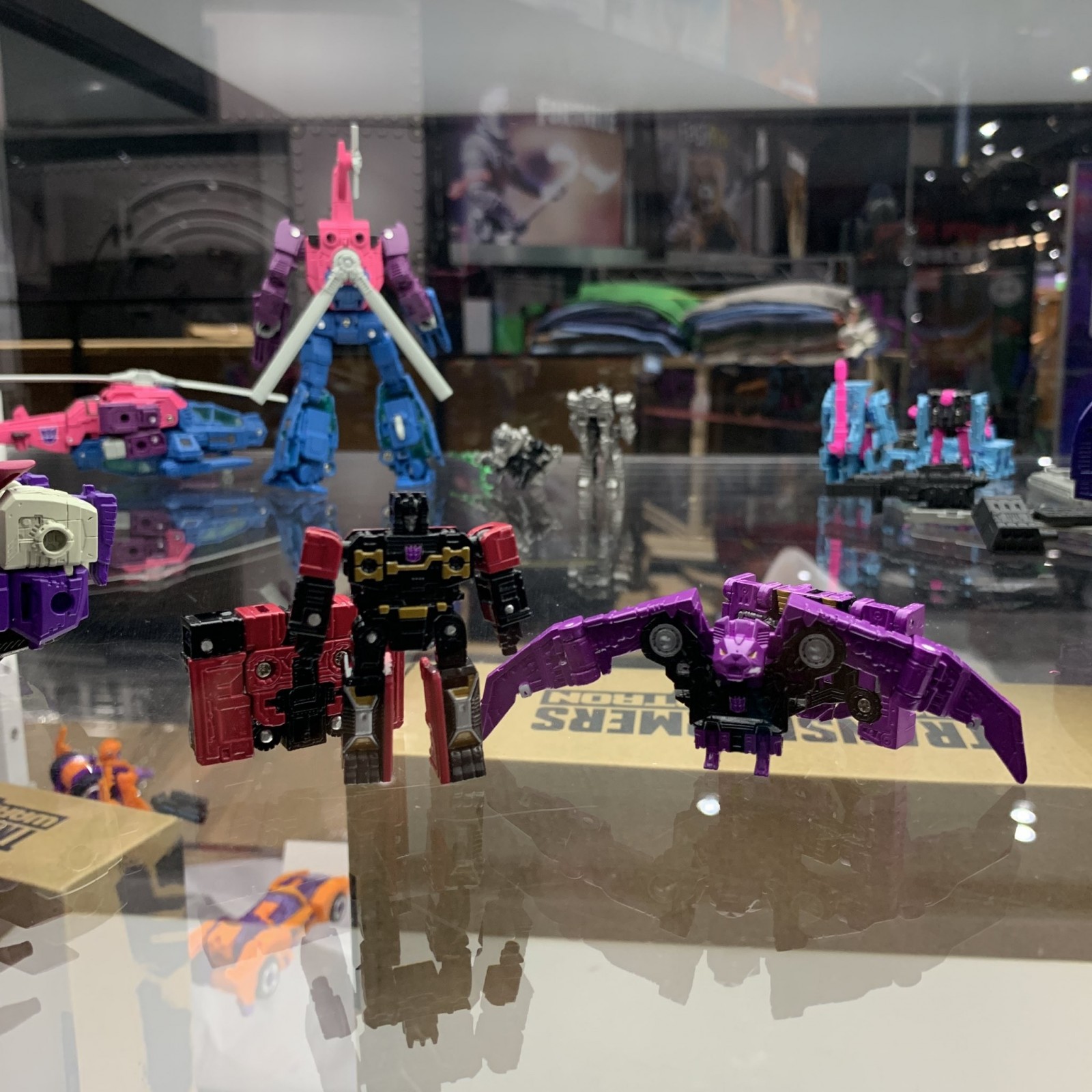 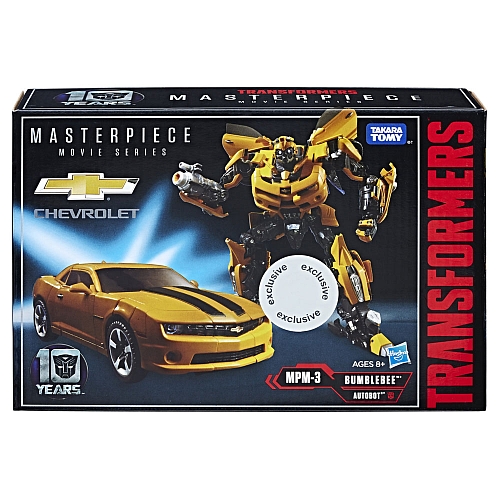 We have more details on Bumblebee's release as a Toysrus exclusive in North America, at least for Canada. He is listed at the price of $129.99 CDN, which is exactly $99.99 USD (much lower than anticipated based on Hasbro's recent overestimate of currency exchange). He is also limited at 2 per buyer, which is always welcomed for sought after items. He is currently not available but should be shortly. There is also a Hasbro coupon for $20 off anything over $50 so any Canadian fan could get this toy for $109.99 instead. The coupon can only be used in stores but that is good news since this toy has already been found in both Ontario and Quebec stores.

Below is all the product info including SKN and other identification numbers.

Whether hes cruising the highway as a slick Chevrolet Camaro or facing the Decepticons in battle, Bumblebee is one of the bravest bots in the universe. Celebrate the heroic Autobot scout with this Masterpiece 10th Anniversary Movie Series Bumblebee figure.

This Bumblebee MPM-3 figure is perfect for fans and collectors alike, with features inspired by the explosive 2007 Transformers cinematic hit. The figure showcases Bumblebee in a sleek Chevrolet Camaro design rendered with impressive attention to movie detail. The figure features premium die-cast additions and comes with a Stinger Blaster weapon accessory. Gear Bumblebee up for action with a flip-down battle mask and extendable fingers. Converts from robot to Chevrolet Camaro mode in 33 steps.

Universe Ultra and Voyagers Out in Canada

Reports came in tonight about Universe Onslaught and Powerglide being released in Canada. Being the news hound that I am, I decided to take a look for myself.

Tonight at the Heartland Walmart in Mississauga I found Universe Ultras Onslaught & Powerglide along side with Voyagers Blaster and Heavy Load.

What is strange about these sightings is that they are in U.S. packaging and not the tri-lingual packaging Canadians have come to expect.

Along side these figures were a boat load of Animated Wave 3 Deluxe figures (Oil Slick, Autobot Jazz, Soundwave and Snarl) and Wave 3 Voyager figures (Grimlock and Lugnut) and one sole box of Roll Out Command Optimus Prime.

Have you seen anything and exciting to report? Why not share it with the world in our Sightings Section!

Good news for our members to the north! Cybertron.ca member kakokako has reported finding Animated Wave 3 Deluxes Soundwave, Jazz, Snarl, and Oilslick in Canada. To see the original posting, click here. So let the hunt begin from Vancouver to Montreal and everywhere in between. Be sure to report your own discoveries to our Sightings Database and discuss your treasures in our Sightings Forum.

If you luck out though, always remember you can check out these figures in each of their respective Seibertron.com galleries listed below until you can find them in person.

We will keep you posted when other new items are found. In the meantime, good luck hunting!

Seibertron's own RodimusTitan has confirmed that sightings of Transformers: Animated Wave 3 Deluxe figures in the Washington State Area were not hoaxes.

I'm here to confirm that they are out. I just got back from a different Target in Washington state and found all of the Wave 3 deluxe figs.

To confirm his purchases of Animated Soundwave and Jazz from Target, RodimusTitan has posted an image, including the receipt, which can be seen below.

Wave 3 of the Deluxe Animated toys consists of:
Soundwave, Snarl, Jazz and Oil Slick. Keep your eyes peeled, as chances are they will be available across the North American Continent in the next few weeks.

The website has these marked as 'online only' however we have received the following report from Walmart employee King Slick claiming otherwise:

Spotted the cases during lunch while on my lunch break at the Wal-Mart in Casa Grande, AZ, store #1218...the cases read as follows: "Transformers Voyager Classic" which was different from simmiler cases also containing Transformers that read "Transformers Cybertron Voyager".

There were also cases marked "20th Aniversery Optimus Prime"...it is unknown if it is a return of the same 20th Aniversery release from last year or the pre-release figure/DVD (which appears to be a month early as the release was dated for mid-Nov., not early-October). Unfortunately I didn't bother to see if the associate working toys managed to some how put out the figures or not as I work in the grocery isles (and no, there are no signs of any Transformers fruit snacks...yet)

In addition we have unconfirmed Walmart sightings of Optimus Prime and Megatron reported at our Sighting Section.

UPDATE: ShGarland_1383 of our Energon Pub forums has posted the following images of his Transformers Classic Voyager Class Optimus Prime purchaced of the shelf in Arizona. Looks like its official! Classics Voygers are available at Walmart!

Report your sightings and check availability of Transformers in your area at the SEIBERTRON.com Sightings Section!

KneonT, Sureshot, and Sunstorm9119 of TFans.com have all reported finding Transformers Universe: Battle in a Box Ultra Magnus vs. Treadshot, Smokescreen vs. Ransack, and Oil Slick vs. Crystal Widow for only $7.99 at discount wholesaler Big Lots. There is also an unconfirmed report of Big Lots also selling 20th Anniversary Optimus Prime for only $25.00!

Report your sightings here at the SEIBERTRON.com sighting section!

Transformers Generations Selects toys to be Released in 2022

4 More Vintage Beast Wars Figures to be Released in 2022

Transformers Draculus Found at Toysrus Canada for $72 + In hand Images

Transformers Draculus Found at Toysrus Canada for $72 + In hand Images

4 More Vintage Beast Wars Figures to be Released in 2022