Looking for a Botcon exclusive G2 Breakdown? Exercise caution. CHMS is at it again. Using the Sunstreaker/Sideswipe mold from Transformers Universe, CHMS has previewed 4 new KO's including the Transformers Club Exclusive Punch/Counter Punch, Botcon G2 Breakdown, a G1 Breakdown and Scamper. No word yet on how to distinguish these from the authentic figures, so when shopping, consider the source. 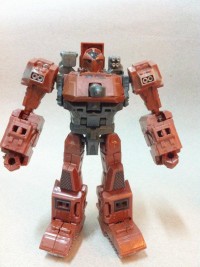 Kablamo, there's a new KO of Generations Warpath in the works BLAMO.
This figure was brought to our BOOM attention by Transformers-Galaxy's, a Hong Kong based Transformers fan group, Facebook page. They have posted a small gallery of two examples, we have mirrored two images, if you want to see the rest just click the following images BAM.

The album title says that these are 12 cm tall, the original Generations Warpath is 14 cm tall, making these KOs just about a head shorter. BLAM

Stay tuned to seibertron.com for all your Transformers related KABLAMO news! 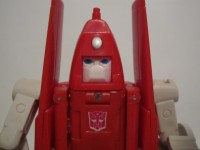 Our very own El Duque has received his Xtransbots X1 Glider/Air Warrior and decided to share the following review:

I got my Xtransbots X1 Glider/Air Warrior yesterday and decided to take a few pictures for those who might be interested. First let's establish what this is. There's quite a bit of confusion about this guy because there are two third-party companies that have upsized and revised the JazaiToys Wheelie and Powerglide molds, Xtransbots (a CHMS project) and Superalloy. The Xtransbots figures are all plastic whereas the Superalloy figures feature diecast. From what I understand the Superalloy Powerglide is currently in production and should be available in the near future.

Onward to Glider! I'm not much of a packaging guy, but this is actually pretty nice. It's display minded for you MISB guys, made of decent quality cardboard, and features nice art. As you can see the front flap opens to reveal the figure in alt mode and features a hook and loop closure. Glider is secured in a clear plastic tray with a couple of twist-ties. The back teases their upcoming Galvatron homage, Tyrant. He comes with a small instruction sheet naturally, however you'll be working backwards since they take you from robot to alt mode. The instructions show a step were the face would be concealed in alt mode, but apparently that was scrapped. You also get a card that has his bio and specs.

As previously stated this is basically a knock off of the JazaiToys Powerglide. It's been upsized to roughly Deluxe class and ball joints have been added to improve articulation. He comes with three weapons, two hand guns and a knife. You can store one of the weapons in his chest cavity if you wish. He's spot on in both modes and displays well with the other Classics universe Minibots that have been upsized to Deluxe. He has decent articulation and stands easily thanks to his large flat feet. He's not without his flaws though, his arm joints are a little loose as are the rotational joints for his wings. He can still easily hold poses though, and if you really want to stiffen them up a quick coat of super glue will do the trick. The plastic quality could be a little better, my figure has a few stress marks from assembly, but nothing feels like it's going to break. Overall I'm happy with him, and he looks good on my Classics shelf.

The figure and his white repaint can be purchased at site sponsor Robotkingdom.

According to yizhi521, the trailer is available now. 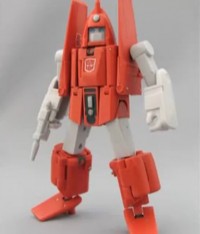 A review of the CHMS Xtransbots Glider has been posted YouKu, the Chinese equivalent of YouTube. Naturally the reviewer is speaking in Chinese, but we still get a nice look at the figure. This is an upsized and revised version of the JazaiToys Powerglide, not to be confused with the yet to be released SuperAlloy Powerglide Warrior, which is also an upsized version of JazaiToys Powerglide featuring a healthy dose of diecast. Click here to view the video. 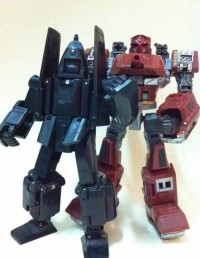 The Transformers Galaxy Hong Kong Fans Group have uploaded an extensive image gallery of a prototype X-Transbots Glider (aka Jazai Toys Powerglide). The images show off the figure's articulation and mold modifications, mainly the inclusion of ball joints. We also get a nice size comparison with Generations Warpath. 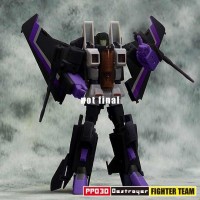 Third-party toy maker iGear has listed pre-orders for PP03 Destroyer, PP03 Traitor, and PP03 Lightning. These are iGear's unofficial versions of Skywarp, Starscream, and Thundercracker respectively using their modified knock-off Masterpiece Seeker mold. Each figure features a more cartoon accurate deco and a modification to the legs that integrates the hip kibble that is present on the official Masterpiece Seeker mold onto the lower legs. Images mirrored below.

What time is it? Time to get three galleries closer to our goal of 2500 with these transforming timepieces! Optimus Prime and Bumblebee come to us from the current Transformers Dark of the Moon line, while our third offering, Scorpia(Quartz), is a bit more of a vintage oddity. This one actually being a KO version of the rare G2 watch-former Scorpia.

Enjoy the galleries by following any of the links or clicking the images below. Bumblebee (Watches)
Dark of the Moon 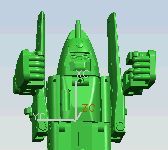 Powerglide's agent must be working overtime! It appears yet another third-party/KO version of the G1 mini-bot is in the works. In addition to Maketoys, iGear, and X Transbots, it looks as though well known KO producer CHMS is also throwing their hat in the ring. The image mirrored below is from their weibo micro-blog, and as you can see it looks strikingly similar to Jizai Toys Powerglide.