ROTF release date for Movie and Toys in Australia announced

Seibertron.com has just received word from Australian TF fan site Ozformers that the projected release dates for the Transformers: Revenge of the Fallen movie and toy line have been released.

According to board staff member griffin, the movie will be released on June 25th, 2009 and the figures should hit retailers shelves less than a month prior by May 31st of 2009. This information comes courtesy of the Toy Retailer magazine.

This is also the day that Germany is projected to see a film release, a full day before the US release.

View the original posting on this by clicking here.

Trying to get information on the next Botcon has been harder than trying to pull healthy teeth, but we finally get a little hint of what we can expect at the Transformers Club's official event.

According to the latest issue of the Transformers Club Magazine, Brian Savage tells us that three of the Botcon exclusive figures will have remolded heads. As to the who, what, where and when, no word has been mentioned as of yet. This number is one short of the total exclusive figures, which had four remolded heads in Shattered Glass Goldbug, Blurr, Megatron and Jazz/Richochet.

Complete details of the Club exclusive magazine are only available to recipients, and in order to receive it you gotta be a member. Sign up by visiting the TFCC Homepage and don't forget we have an exclusive, ongoing, question and answer thread dedicated to the TFCC here.

With more and more families feeling the financial pains of the current state of economic recession, they are turning to the Toys For Tots Foundation to help provide their children with a little joy this holiday season. The Toys For Tots Foundation is also experiencing a drop in toy donations as less families are able to afford purchasing toys for the collection bins.

Now you can help without even going to the store. Text For Tots is a new way that the US Marine Corps Reserve based charity has devised so that you can provide a $5.00 USD donation to Toys For Tots via your mobile phone.

Simple text the word TOY to number 90999 and a one time charge of $5.00 USD will be added to your phone bill. These donations will be used to purchase toys for "the economically disadvantaged children across the country".

But wait, it gets better. Not only will your donation go to helping deserving children, but our favorite toy company, HASBRO, Inc. has agreed to donate a toy or game for every text donation received by December 21st 2008, by up to 150,000 texts.

"Through the gift of a shiny new toy, Toys for Tots delivers hope and joy to millions of children," says Brian Goldner, president and chief executive officer for Hasbro, Inc. "We want to help make sure every family who turns to Toys for Tots for assistance this year, will have the opportunity to put a smile on the face of a deserving child."

Here is a great opportunity to help out a worthy cause and double the joy of giving with your donation.

To learn more about the Text For Tots charity, click here.

The National Retail Federation recently conducted a survey amongst holiday shoppers and got the scoop on what consumers say are the hottest toys to grab this Holiday season.

The TRANSFORMERS brand ranked 5th in the top 10 toys for boys catagory, just behind Video Games and the Ninentdo Wii console but beating out Star Wars and XBOX 360.


Another interesting report the survey had was that 77 percent of shoppers who participated had less than 10 percent of the their holiday shopping done. In a statement made by NFR President and CEO Tracy Mullen, she cited that “Americans may be hesitant to purchase expensive gifts this holiday season, but personal and practical gifts will resonate most with shoppers this year.” She also said that “Though many companies have already been featuring substantial sales and discounts, retailers may still have a few tricks up their sleeves to attract and entice holiday shoppers.”

Whoa nelly! With Walmart already featuring Transformers Deluxe class figures at $7.77 USD, and TARGET Stores following suit at $7.79 USD for the same class figures, the thought of getting better deals on Transformers figures may just bump Video Games out of that number one spot.

Stay tuned to Seibertron.com for all the latest news on Transformers Toys and Products.

slachfilm.com has an article about a fan-made Transformers the movie Bumblebee costume. Lionel Lum the creator of the costume took 3 months to plan and make the costume so he could wear it at the San Diego Comic Con 08. This costume is a highly detailed and incredibly accurate representation of the screen character. Just take a look below and feast your eyes on the awesomeness that is the best Movie Bumblebee costume. 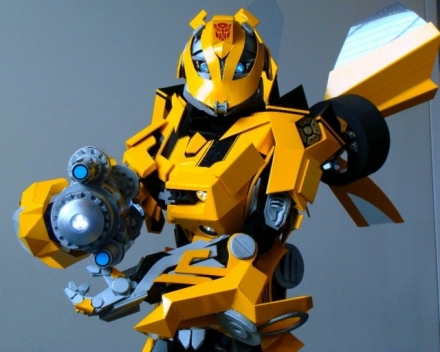 click here to see more images and read the article.

Stay tuned to seibertron.com for all your Transformers related news.

Despite the loss in profit that HASBRO, Inc. (HAS NYSE) reported on Monday, October 21st, analysts reports and investors continue to give the toy company the greenlight when it comes to buying common shares.

Financial Writer, Glenn Curtis of the Investopedia Community posted an article today outlying why he believes that HASBRO is the best choice when it comes to toy makers. Taken from the article:

Nemesis Mattel (NYSE:MAT) has a long and storied history similar to that of Hasbro, but I think that when it comes down to it, Hasbro is the better play. First, Hasbro managed to beat analyst's estimates by a pretty impressive three cents in the period. Meanwhile, Mattel released its third quarter earnings on the same day, and it earned 66 cents a share, which was five cents below what analyst’s had been looking for.

He then goes on to list all the acheivments that the company has made within the last year and the massive buy back of HASBRO stock that the company invested its money in. He explains that the buy back shows the confidence that the toy manufacturer has with its projected financials which will translate into common stock gains over the next year.

All in all its a great read and you don't have to be an Exchage specialists to understand what he's saying.

Check out the complete article by clicking here.

In a report earlier today by Seeking Alpha (a stock anaylst website) the projected earnings report for HASBRO, Inc. (HAS NYSE) has been posted.

In a nutshell, the outlook is good for the Transformers creator's quarterly financial gains despite current economic stresses and a projected cut down on "discretionary spending" by consumers.

Analysts are also predicting that Transformers: Revenge of the Fallen will generate even more revenue than the first film in both box office and toy sales, keeping HASBRO at a higher gain.

As previously reported, HASBRO is set to webcast its 3rd quarter earnings report on Monday, October 20th, 2008 at 8:30 A.M. EST.

In todays rough economic times, its comforting to see that even political cartoonists can find refuge in the Transformers genre. In what seems to be based of of Matt Moylan's own Lil' Formers, Sinfest.net has found a way to incorporate transforming robots and the current financial recession the countries in and find a happy (or not so happy) median.

Since the Transformers live action movie hit the production phase, people all over the globe have been finding ways to capitalize on the phenomonom that is Tranformerdom. We've seen piles of junk made into Optimus Prime. We've seen complete paper replicas of Bumblebee. Now we get a look at how one Chinese junkyard owner is trying to cash in on the Transformers.

...one Chinese entrepreneur from the Zhejiang province had a plan to promote his particular pile of junk as something special. He'd build full scale Autobot sculptures.

It's hard to say who this BMW is supposed to be, but it definately favors the G1 era. Check out the original article on this here.

In an effort to quell the economic crunch being experienced by consumers, Transformers creator HASBRO, Inc. (HAS NYSE) has issued a statement regarding toy price ranges for the upcoming Holiday season.

In the statement, HASBRO projects most toylines to fall within the $20.00 USD pricing bracket. This pricing is a direct result of the current financial stress that families have been experiencing from the recent Stock Market woes and is meant to help parents in their time of need. The Company's CEO, Brian Goldner, also stated that two thirds of HASBRO products are already priced at $20.00 USD or below.

Walmart Stores has stated that its franchise has already cut prices in advance of the Holiday season with price reductions in most Deluxe line figures of the Transformers Toys and HASBRO's Play Doh Ice Cream Shop.

Good news for us consumers for the fast approaching festivities.

To view the original article on this, click here.