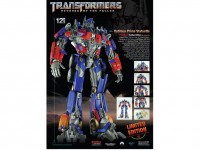 Joel, owner of Big Bad Toy Store, one of our sponsors has informed us of a new Revenge of The Fallen Optimus Prime statue from Popbox Collectibles. It is priced just short of $370, is twelve inches tall, and comprised of many separate pieces. To view the listing, click here. 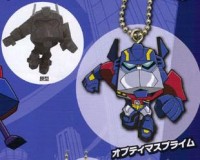 Thanks to Sprocket of The Allspark Forums, we get an image of one of the newest promotional items for Transformers Animated in Japan.

Super Deformed Keychains are in the works for some of the key characters of the first season of the short lived cartoon. From the image, we know that Optimus Prime, Bumblebee, Ratchet, Prowl, Starscream and Bulkhead (apparently renamed Ironhide) are gonna be some of the SD keychains available. No word on when these are to hit the Japanese market at the time of posting.

Is a Masterpiece Ghost Starscream coming in 2010?

An email supposedly sent out by Gerard of Robo robo, a popular hobby store in Singapore, announces a pre-order for a ghost/clear version of MP-03 Masterpiece Starscream. According to the email received by our own Seibertron.com member freaky777, the figure is slated for late June 2010 release and will cost approximately 10,000 yen, or around 138.00 Singapore dollars (about 98.00 USD). No official images of this figure have been released yet and this figure has not been confirmed by Takara. However, with the recent release of the Henkei Ghost Starscream, it is very possible that the toy maker has this release in the works.

Stay tuned to Seibertron.com for the latest on this story and for all the latest Transformers news! 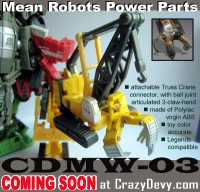 Thanks to Seibertron.com members Skyfire77 and Stixx Eppley for letting us know that Crazy Devy, the third party accessory provider for everything Devastator, has updated their site for the second time this week with a limb upgrade for the EZ/Legends CDMW-03 ROTF Devastator set. This time, the left limb, formed from Constructicon Hightower, gets the hand upgrade. Instead of having to make due with the skinny appendages from the original figure, the new add-on give the left hand an articulated, three digit claw that makes it more movie accurate. No word yet on when this set will be released or what the final price will be. Stay tuned to Seibertron.com for more details as their released.

And as always, please keep in mind that this is a third party set, and is not endorsed by Hasbro or Takara.

I guess this is all you've been waiting for. Nova Commander super-mode!!..Nova Commander's Robot Mode combines with trailer to form the Super Mode!. Ultra badass figure..with BFG weapons from his trailer and comes up to 8 inches in Super mode. Enuf said...As mentioned earlier in the Part 1, the auction is for this prototype figure which we used for comparison and picture taking, so the winner of the auction gets this figure!! "

No info on how many or when these will be available, but you can view more pictures on this third party custom by clicking here. 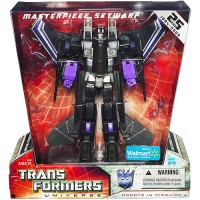 Still on the fence about buying the US release of Masterpiece Skywarp? Seibertron.com member Josh Powell has let us know that Walmart.com has updated their site to include the 49.00 dollar deal on the Hasbro release, Walmart exclusive Masterpiece Skywarp that several members reported seeing in stores over the last few of weeks. What makes this deal even sweeter though is that not only does that lower price include 97 cent shipping, but you also receive a free 10 dollar e-gift card good for future Walmart.com purchase, essentially making the price of this figure 40 dollars shipped to your door. Since there's no way to tell how long this offer will last, interested Seibertron.com members should act fast to take advantage of this great deal. 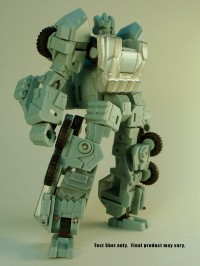 Third party toy maker - Fansproject has updated their website with some new images of upcoming tripple changer Defender. The images show the toy in the two alternate modes as well as robot mode.

On the other development, Fansproject also teasing us with silhouette of their new product - TF-Crossfire 02. This new product is speculate to be none other than the Combaticons combiner - Bruticus. The second shadowy outline image is presume to be Combaticons leader - Onslaught in alternate mode.
It is unclear at this moment that this toy is a brand new product or just the add on.

Just to remind readers that these products are not official products from Hasbro Inc or Takara Tomy.

Stay tuned to Seibertron for your latest news on Transformers. 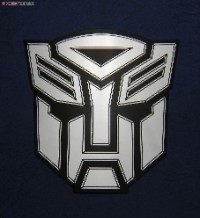 Japanese Online Toy Store - Hobby Search has listed a new item. This listing shows us a piece of memorabilia that takes the from of the Autobot Faction Emblem, which also acts as a magnet.
One set is consists of 2 pieces of the Autobot emblem.
Hobby Search listed the release date is December 2009.

Stay tuned to Seibertron for all your latest information on Transformers.

In Japan, Nippon Broadcast and Takara Tomy has collaborate and release the memorial stamp set featuring Transformers Revenge Of The Fallen.

This memorial stamp set consists of:
- 10 pieces of stamps with the value of Yen50 each
- 5 pieces of trading cards
- A4 size special edition paper holder

The memorial stamp set is only limited to 3000 sets and open for pre-order in Japan now up till 27th December 2009.
Delivery is expected on the end of January 2010.

Stay tuned to Seibertron for all your latest news on Transformers. 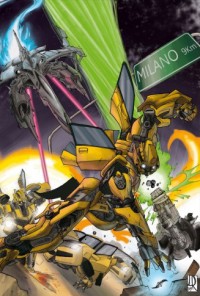 Seibertron.com member M3Gr1ml0ck has informed us of a new art exhibit that will be taking place in Milano, Italy celebrating the Transformers brand 25th Anniversary. Here's what M3Gr1ml0ck had to share:

From November 28th to December, 6th, young artists of the "Scuola del Fumetto" (school of comics) pay their tribute to the Transformers, celebrating their 25th Anniversary , with 24 illustrations in which Megatron, Optimus Prime, Bumblebee and others fight their battle throughout the city of Milano (Italy). Event has been promoted by Hasbro and carried out by Scuola Del Fumetto, in partnership with Paramount Home Entertainment.
The exhibition, “Transformers a Milano”, will open at Yamato Video shop and will feature not only the 24 illustrations, but a wide selection of historical toys, from G1 (1984) to RotF.