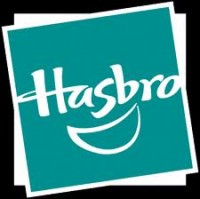 On December 19th, the Institute for Global Labour and Human Rights posted an article on their website accusing Hasbro of poor working conditions and less than adequate pay for workers at the Jet Fair Factory in China. The article can be read here.

In a press release last week, Hasbro addressed the claims of dire working conditions in their Jet Fair Factory stating they have taken the allegations very seriously. They deployed a team to work with I.C.T.I (International Council of Toy Industries) to examine the conditions of the facility. After an unannounced, nine hour inspection, both Hasbro and the I.C.T.I. determined the facility met "Hasbro's rigorous requirements."

The press statement goes on to say "While Hasbro is committed to continual improvement in all facets of corporate social responsibility, including continued ethical product manufacturing at Jet Fair and all factories that produce Hasbro products, the inflammatory allegations made by the NGO in their report were unsubstantiated by our investigation. As a matter of course, Hasbro will continue to monitor conditions at Jet Fair and all of our factories."

As soon the article surfaced, Seibertron.com members began discussing it in the forums. We immediately contacted Hasbro and they sent the following message to Seibertron.com in response to our inquiries to this matter on December 19th, 2011:

"Thank you for checking in with us on this matter. Hasbro takes all claims involving working conditions very seriously, and we are immediately investigating. The Company has a strong track record and has had long-standing policies and processes in place for years to help ensure good working conditions, including health and safety, at factories making our products. We strive to conduct business throughout our supply chain in accordance with the highest ethical standards, and we utilize not only ICTI-- but also our own on-the-ground workforce-- to monitor social compliance. For more information about Hasbro’s comprehensive corporate social responsibility (CSR) activities, including more detail regarding Hasbro’s policies and practices related to ethical product manufacturing, please visit Hasbro.com/csr."

When the first computer renders and prototype images of TFC Toys Star Cats Rescue Team combiner started popping up fans speculated we might be looking at a set of Neo-Protectobots. We soon learned that wasn't the case, but some still saw the potential for a Defensor repaint somewhere down the line. Last month we got our first hint that TFC Toys might also have the repaint on their minds when a new image of the team's leader showed up on ACToys in Hot Spot deco.

Now we have little more information on the potential repaint from ACToy's Hsaio Red, who's been the source of almost all of the images and information regarding the Dino-Combiner team and Star Cats team. According to his post on ACToys the set will receive a Protectobot repaint limited to 1000 sets. Concept sketches have also been posted of a Defensor head and chest, the other concept drawing in the image is for the Dino-Combiner's head.

We've mirrored the previously seen Hot Spot redeco image, concept Defensor head sketch, and a few images of the molds that would be used below form ACToys. Could this work as the Protectobots with the right colors and maybe some new head molds? 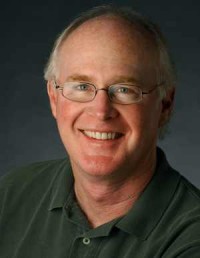 During a recent interview ILM's Scott Farrar talked about the possibility of another Transformers sequel. He says Paramount has already approached him for a fourth film, and he seems to confirm that director Michael Bay has also been contacted. No confirmation of course, but Farrar says he's on board for another film. Video embedded below.

It was just last week that rumors started swirling around the possibility of yet another Transformers film sequel. First Hasbro CEO Brian Goldner stated in a conference call that "active discussions" were taking place with Paramount, Bay, and Spielberg for additional films. That was almost immediately followed by several entertainment websites posting stories that resurrected the Jason Statham rumor and mentioned back to back filming of films 4 and 5. However, Bay and Statham were both quick to dismiss the rumors of their involvement. Out of all the rumors one thing seemed to remain steadfast, Shia LaBeouf would not be coming back.

Now Transformers Dark of the Moon's leading lady, Rosie Huntington-Whiteley, has chimed in on the possible future of the Transformers movie franchise, and seems to think LaBeouf might be game.

"We'll see about that," Huntington-Whiteley told us Monday at the Hollywood Awards, seemingly doubtful about LaBeouf's statement. Asked if the actor could be persuaded to return for another "Transformers," she replied: "I think so. He'll kill me for saying that."

Just like the first time around, the Jason Statham rumor has been put to rest. This time by Statham himself. MTV recently asked the action star about his possible involvement in the future of the Transformers movie franchise, and this is what he had to say:

"You know, I don't know how those things start. You read them. Someone told me about it. [But] the internet is a dangerous place," he laughed. "There's a lot of stuff out there."

Not to say that Statham would be completely opposed to a "Transformers" movie: "I've got a lot of stuff in front of me, but Michael Bay is a talented man. This last one just made a billion dollars around the world, so people like his films. He's a talented man."

Click here to view the original article on MTV Movie Blog, which includes video of Statham debunking the rumor.

Director Michael Bay also dropped by his Shoot for the Edit forums to address the rumors that have been circulating around the internet:

Originally Posted by michaelbay
I am currently not talking to Paramount on T4 and T5 despite reports. I'm looking at a lot of possibilities coming my way right now weighing options. Most likely going to be doing the low budget Pain and Gain, a true story crime thriller. It's a very quick shoot and quite funny. Also just finishing the 3 disc set of the Transformer trilogy.

Transformers 4 & 5 to Film Back to Back with Jason Statham? 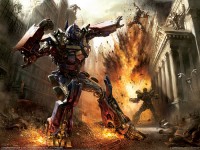 It was only this morning that we reported Hasbro CEO Brian Goldner had mentioned active discussions with Paramount, Michael Bay, and Steven Spielberg for a fourth Transformers film, and the rumor mill is already churning. Collider, MovieWeb, and Showblitz are all three reporting that Transformers 4 and 5 may be filmed back to back, which could potentially save millions. Ehren Kruger is rumored to already have ideas for both potential sequels that Paramount are found of. According to the articles Shia LaBeouf is still out, and once again the Jason Statham rumor rears it's head. Keep in mind the Statham rumor first appeared a few months ago and was quickly dismissed by Michael Bay himself. Then again Bay also stated he was done with the Transformers franchise, and that seems like it may have changed based on Brian Goldner's comments. Sources report Bay is currently only slated as an executive producer along with Spielberg, but he may be interested in directing if he can get his body building movie Pain and Gain wrapped up prior the the filming of Transformers 4. Obviously these should be treated as nothing more than rumors, but interesting ones none the less. 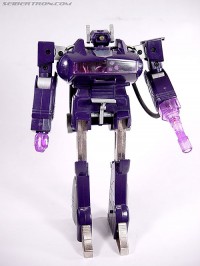 Automaton Toys has shared some interesting information regarding Tarkara's new Chronicle sets over on the Cybertron.CA forums. As we already know the Chronicle sets pair up G1 reissues with their DOTM counterparts, so far Takara has released CH-01 Optimus Prime, CH-02 Megatron, and it's rumored that CH-03 will be a Bumblebee set.

For the moment these sets can only be considered rumors, as Takara has remained tight lipped about future Chronicle releases. Could fans finally be on the verge of a long awaited G1 Shockwave reissue? Time will tell.

Update: Here's an image of the inner box flaps courtesy of the snakas twitter feed. 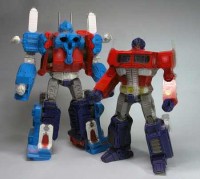 Takara designer Hasui Shogo has posted an interesting image to his twitter account of what appears to be MP-10 Convoy Version 2.0 wearing carved up G1 Ultra Magnus trailer/armor. A very early concept of things to come? Keep in mind this isn't confirmation that MP Ultra Magnus Version 2.0 is coming, just something to be filed away as "interesting". Take a look at the image below. 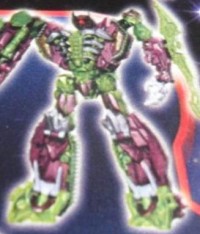 Full Metal Hero member Full Metal_Luffy made an interesting discovery in the pages of a recent Tesco catalog, an image of Transformers DOTM Voyager Shockwave in unusual purple and green colors. Some have speculated this is just an editing error or possibly a lighting issue. Regardless it's an interesting image, check it out below.