Video reviews for Transformers DOTM Deluxes Soundwave and Que/Wheeljack have made their way to YouTube. Both reviews feature the recently released Takara DSM versions of the figures, which have yet to see a domestic Hasbro release. Check out the reviews below while we patiently await the Hasbro versions of these two highly anticipated figures. 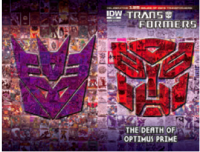 A moment of silence please, a hero has fallen...

....Out today in stores, IDW’s One-Shot story wraps up the events of CHAOS, and sets up readers for the next step in IDW’s Transformers comic fiction, the introduction of two new separate titles, ‘Robots in Disguise’, and “More Than Meets the Eye’.

*SPOILERS AHEAD (you can see the preview, which in itself has many spoilers in our recent news).* 
After the last mostly-useless Transformers issue (in my opinion) from IDW, this one with its ominous title, and with Optimus Prime’s history of dying in other fictional iterations, seemed like it would be another obvious, and simple issue that I could read and then throw aside, and not really care to read again. I was pleasantly surprised by the content in this issue, the ramifications of the storyline, and the fantastic way the title misleads, and yet, is true.

Transformers D.O.O.P. (not the Marvel X-Force version), is creatively done by the team that brought you the ‘Last Stand of the Wreckers’ mini, a popular recent story under the IDW banner, with John Barber co-writing with James Roberts, and Nick Roche on art.

First off, there are NO HUMANS in the story nor do they seem like they will play a role any time soon. To me this is refreshing, especially with the overly human centric writing of the previous Transformers Ongoing series, and the overall seeming generalization by many Transformers genre creators that there must be human characters for the Transformers to interact with before any of us common folk will truly understand their motivations. Bulls--- I say!

Even though it is number #125, and described as a one-shot, this issue is essential to new and old readers alike! It’s not a story of its own. It involves the recent past events and leads into the future two series.

Taking place a few weeks after the final events of CHAOS, this issue focuses on what has happened on Cybertron since Optimus Prime rushed the matrix into vector sigma to stop ‘DVoid’s (eye roll) attempt to sack the galaxy using Cybertron’s dead husk as his jumping point.

How did this stop ‘DVoid’? Cybertron was reborn, and there was no dead husk for DVoid to use. Perceptor and Wheeljack can’t explain it we are told in a Hot Rod exposition, so I won’t try to go any further than that.

Spoiler. Optimus Prime is not dead! His previous action with the matrix caused vector sigma to send out a signal to all Cybertronians that Cybertron was ‘reset’, safe to return to... reborn, but a ‘primordial’ form as Hot Rod puts it, like the very beginning of Cybertron.

Did you know there were other groups of Cybertronians in the galaxies besides the Autobots and Decepticons? Probably. If you read DRIFT’s mini we ran into one of them. We find out there are many, many, many more than those. A mass exodus from Cybertron due to the ramifications of the civil war happened, and now the opposite is happening...during the three weeks many members of the race are returning to repopulate and take back the planet they once called home.

Resettlement by these groups sets up the monumental ramifications that the Autobots must now deal with: how they are perceived by the returning masses of N.A.I.L.S (non-affiliated indigenous life-forms), how they will ‘re-create’ Cybertron, and what identity the Autobots will have now that they have won, so to speak. The Decepticons are imprisoned, and defeated. Megatron is nowhere to be found. And the returning masses of Cybertronians who left the planet, see the Autobots not as peace-loving heroes to be celebrated, but as the winning faction in a civil war, a civil war that had caused the planet to die, and forced many folks to abandon it.

This is what has me interested to continue with these new series. This is what for some reason, I feel like I have been waiting for for awhile. That the Transformers stories can be worthwhile and interesting without them having to be related to humans. That there is more to Transformers society than the battling Autobots and Decepticons and their historic conflict. That the Autobots are not ‘good‘ in every Cybertronian’s eyes. This is the direction that new writers James Roberts, and John Barber are taking our group.

Hot Rod and Drift want to go searching for the lost civilization of earliest Cybertron, and it seems like the empty matrix husk may be the key to this quest. Bumblebee wants to help create Cybertron again. Where does Optimus fit in?

This issue has some fantastic surprises. For those who like Dai Atlas making an appearance in the DRIFT mini, another leader, this one from Super God Masterforce is introduced as being a possible major player and leader for the NAIL Cybertronians in the new ROBOTS IN DISGUISE series. The continuing addition to the lore of Optimus Prime’s character is what I love about this book, while it continues to enhance and develop the rest of the Autobots’ courses into the next series. I am quite happy with Prime’s finale. Ongoing attempted to give Prime more characterization, change him from what he is, but ultimately, his identity was what it was and he could not change that, nor could his writers. Optimus Prime’s final choice in the issue, and thus, the series, is logical but unexpected, and although it seems like a re-ran, it feels different, and it’s this difference that to me makes the character seem more Optimus Prime than he has ever seemed to me.

The art is Nick Roche art at his best. Same style as “Last Stand...”, it seems recognizable, and comfortable, but I also think based on the success of ‘Last Stand...” it lends credence to the new story and direction. Unlike when Don changed his style, and the looks of all the Transformers forever, Nick’s familiar style may help people to buy into ‘More Than Meets the Eye’. Yes, it’s still cartoon-y and over emotive, and in some cases overly lengthened and skinny appendages as Nick’s critics have said, but it is part of a creative team’s style that worked very well previously, and in that this reader finds interest and comfort.

After reading this issue, I am excited for the two new series to begin. It’s nice to know they are NOT a reboot, but a continuation using what happened before, and driving it in what ultimately seems like an uncharted, but desirable direction with a team of creators that I and many other readers have confidence in.

This issue is refreshing, and with its many choices of covers, it’s an excellent collector’s piece as well, even though the story itself is reason enough to want to have this. It’s a great starting piece for people coming on, it’s a nice wrap up and new compass direction for those of us who blindly read, follow, and consume any Transformer fiction thrown in front of us. It’s a direction that has really only been hinted at on the fringes of the recent minis and spotlights that readers like me have wanted them to explore more.

Sorry I've never written a eulogy before, and neither was this actually intended to be one (that is way too creative for me on my limited time budget), I see this issue as the eulogy for TF Ongoing, it's buried, and time to move on.

Enjoy Issue #125. I did. And no, Optimus Prime is not dead. Heroes never die. As has been the case with the previous TFC Toys Hercules figures the first video review has surfaced for Dr. Crank on the Chinese video sharing website YouKu. The audio is in Chinese naturally, but the video (over 25 minutes) offers a comprehensive look at the new figure. Click here or the image below to view the video. 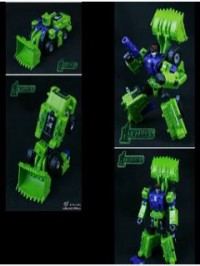 The first video review of TFC Toys latest Hercules figure Structor has been posted to the Chinese video sharing site YouKu. The review is in Chinese naturally, but at 22 minutes and 51 seconds it offers an extensive look at the figure. Click here to view the video. 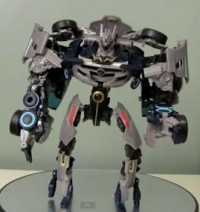 Seibertron.com member baltmatrix has uploaded a video review of the Takara version of Tranformers Dark of the Moon Human Alliance Soundwave with Dylan Gould and Laserbeak. There appear to be practically no differences between the Hasbro and Takara versions outside of some slight variations in the packaging. Check out his review embedded below.

YouTube member thecollector75 has uploaded a video review of the last two figures for 2011 in the popular Generations line, Junkheap and Sky Shadow. Junkheap is repaint of RtS Wreck-Gar featuring a brand new head mold. Sky Shadow uses Generations Thunderwing as a base with a slick new black deco, new head, and remolded chest. Check them out below. 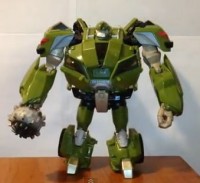 As a follow up to his earlier review of Transformers Prime "First Edition" Voyager Class Optimus Prime, peaugh has uploaded his review of Prime's casemate Voyager Bulkhead. Video embedded below.

Popular YouTube reviewer peaugh has uploaded full video reviews of the highly anticipated Transformers Prime "First Edition" Deluxes Cliffjumper and Bumblebee. His reviews have been embedded below for easy viewing.