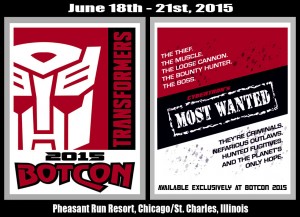 With a peculiar choice of timing, as a lot of people not in the US are probably still/already celebrating the arrival of the New Year, the official BotCon Twitter account and the official website have 'revealed' this year's theme for the convention exclusive set. It looks like you'll be hunting for Cybertron's Most Wanted in 2015 - a set of supposedly five figures nicknamed The Thief, The Muscle, the Loose Cannon, The Bounty Hunter and The Boss! 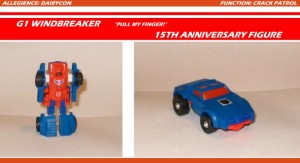 It's here! The first epic pictorial reveal of the DAIRYCON 2015 EXCLUSIVE WINDBREAKER has been released:

Not to be outdone, we've also discovered his bio:

Profile:
Windbreaker has never met a joke he didn't like, and of course, fart jokes are his favorite of all. Nicknamed "SBD" (Silent But Deadly), Windbreaker is very popular among his allies. His jokes keep his comrades loose on the battlefield, and entertained when off duty. Windbreaker is a lover of anything that can be called retro, so much so that he upgraded his alt mode to a classic 1970's Trans Am and installed a record player and a mini disco ball. Can often be seen speeding down the highway at night, his disco ball shining through his windows. Tends to overuse some classic words and phrases, especially exotic terms for, and relating to, flatulence; "Barn-Burner," "Booty-bomb," "Fire in the hole," etc.

Abilities:
In robot mode Windbreaker carries an incendiary acid rifle whose explosive blasts can dissolve the strongest materials on contact. In vehicle mode, the noxious fumes given off by his malfunctioning catalytic converter can interfere with other bots targeting systems and incapacitate most organic life forms. Windbreaker is among the fastest of all Dairycons. On flat terrain his speed can even create a sonic boom...of sorts...disorienting his enemies and occasionally his allies.

Weaknesses:
Human allies have been known to faint or feel lightheaded in close proximity to Windbreaker. His robotic brethren often disable their olfactory sensors around him due to his catalytic converter problem, leaving them vulnerable to certain types of chemical attacks that they would otherwise detect. His disco ball occasionally gives away his position during battle. Calling out different code names for his 'lethal weapon' don't always win him friends. "Hey! I got yer Target-Moo-ster right here!"

WOW! This is definitely a toy 15 years in the making! Only DAIRYCON could have brought you this!

Now, more than ever... Make Mine Dairycon!

Dairycon! A Convention of Our Own! 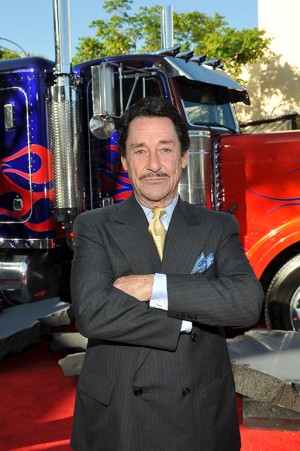 Something that somehow passed unobserved by a lot of us - a chance to meet and get an autograph by Peter Cullen, the legendary voice of Optimus Prime, recently awarded the Walk of Fame handprint recognition. If you're in the Sacramento area, on the weekend of 2nd-4th January, head along to SacAnime, but don't forget to pre-book your signing session right here.

SacAnime welcomes Peter Cullen (The voice of the Transformers’ Optimus Prime and Winnie the Pooh’s Eeyore) to our SacAnime Winter 2015 show. He will be participating in several panels and doing a VERY LIMITED number of autographs. 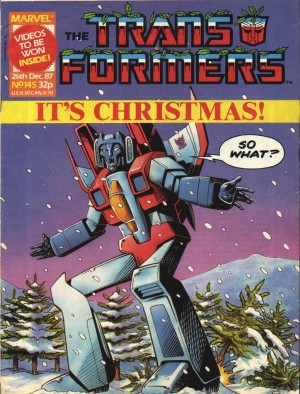 The staff of Seibertron.com would like to wish all of you a Merry Christmas and Happy Holidays to all of you Seibertronians out there. We hope that you enjoy this special time with your family and friends. If you have a chance, stop by and say hello to your fellow fans in our Official Holiday Discussion on our forums.

We wish you and your family happy and safe Holidays as well as a Happy New Year. Remember, please don't drink and drive! If you have a moment in between holiday festivities, please swing by the Energon Pub to say hi and have a few Energon drinks with us!!!

As always, here's a special annual treat for all of you ... check out several different old school Marvel UK Transformers Christmas-related comic stories here to put you in a little bit more of the holiday spirit. 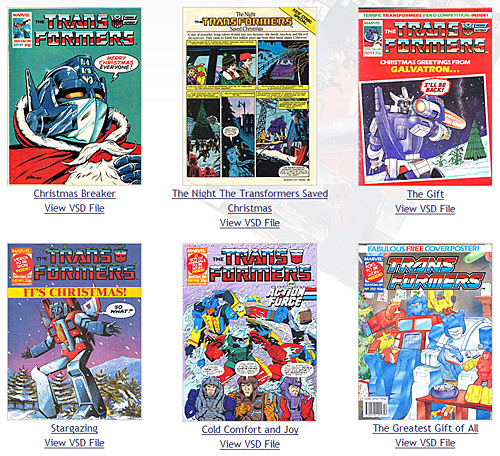 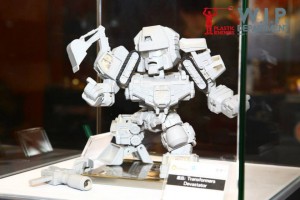 At the Toy Soul 2014 convention, WIP Department Facebook has taken some images from the Kids Logic figures currently on display. While most of the figures displayed we have seen before like both G1 and AoE Optimus Prime, Gold Megatron and Starscream, there were a couple new prototypes on display. The images reveal both G1 Devastator and Age of Extinction Grimlock prototypes. 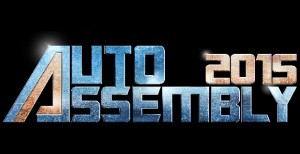 Our friends over at TFCon have updated their website with the news that dealer registration for the 2015 event is now open! The convention will be taking place in Toronto, 17th-19yh July. Check out the news below.

Dealer registration is now available for TFcon Toronto 2015. For those of you that were looking to sell at the world’s largest fan-run Transformers convention now is the time to book, you can contact us now to reserve your space. Dealers from last year have automatically been sent the on-line registration information.

Registration for attendees will be available in the coming months. 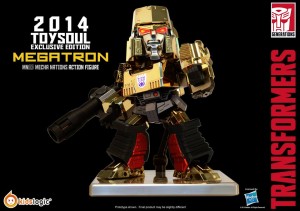 In the wake of the Gold MP-05 Megatron release, Kids Logic is releasing a gold version of their Mecha Nations super deformed Megatron. This release is a Toy Soul exclusive. Toy Soul is an annual event where the Hong Kong toy industry developers get to promote and showcase their product before Christmas. The show runs December 19,20 and 21. 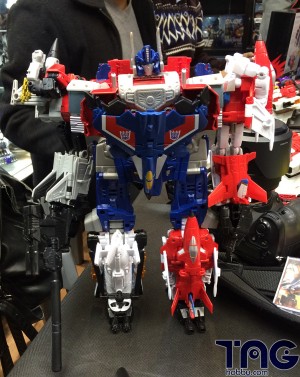 You must have heard of that Singapore store event launching Transformers Combiner Wars - TAG Hobby has posted some nice, clear images of the whole thing a completely different event in Hong Kong, featuring the new Optimus Prime figure, Silverbolt and Aerialbots (minus one), Dragstrip and Legend Class Powerglide, Windcharger, Thundercracker and Bombshell. Added bonus is showing off that all Legend figures can 'combine' with any Voyager torso, as william-james88 has also showed before - check it out below! 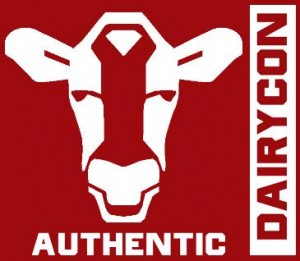 Dairycon 2015 has been announced for March 27 and 28 2015. Check out the announcement below for all the information.

We've reached another huge milestone, as this year is Dairycon's FIFTEENTH Anniversary!

It's going to be big, folks. They've been building to it for 15 years. You *know* they have something special in-store for us. Those folks behind the longest-running TF Fancon never disappoint....

You're excited, you're wanting to learn more, you want to check it out for yourself... But, when can you partake of this cheesy goodness?!?!


REVEALED HERE, FOR THE FIRST TIME EVER:

THE BARN DOOR'S OPEN AND THE HEFFER IS OUT OF THE BARN! DAIRYCON IS GOING TO ALLOW WALK-INS FOR THE 15TH ANNIVERSARY CELEBRATION! THE WORLDS LONGEST-RUNNING TRANSFORMERS FANCON IS FINALLY GOING TO LET THE REST OF US SEE WHAT THEY'RE ALL ABOUT!


I'm sorry about that folks, but I can't tell you how exciting that is. Dairycon has required a Pre-Registration to this private party for *years* now, and the one thing I've always wanted to do is share it with the rest of my friends - to give them a glimpse of why this is so special. You've seen the online posts, you've seen the pictures, you understand the humor in what they do... - A few very lucky few of you have been lucky enough to hold one of the coveted Dairycon exclusives in your hands! Well guys, now you have a chance to see it all *in-person*. You can just walk right in and see for yourselves why this show is so special, why Dairycon has been around for 15 YEARS!

There's more - a *lot* more - but I'm just too excited right now. This is a big deal for Dairycon, as they've worked hard on making Walk-Ins a possibility for some time now! I'll leave you with *that* bombshell, and give you the next big updates in the follow-up posts. You won't believe it. *I* don't believe it.