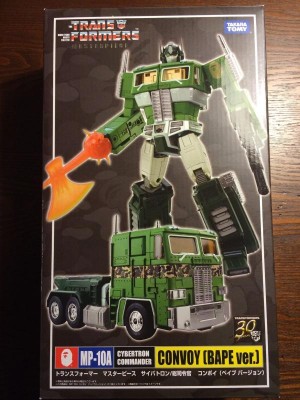 Fellow Seibertron.com user shajaki has spent quite some time figuring out all the differences between the Takara Tomy MP-10A Bathing Ape Convoy and its unfortunate knock-off counterpart. As some collectors may still be on the hunt for this redeco, we're sharing with you all the guide put together to figure out whether you're looking at the real deal or not - check it out below!

Alright folks! I have been driving myself nuts over this figure. At first because of the cost. Then because of the picture perfect KO. I've been researching a bunch over the past few days, and feel I have enough findings to finally make this thread. so here we go!

First: The box
Down there are some pics of the legit box. Now, I work in a chemical plant. And any given thing we have (received or blended by us) has a "lot" or "batch" number mainly to keep track of when and where things are made. Well apparently toys are no different. If you check on the bottom of the MP boxes (or elsewhere on any other TF) you'll find the lot number. I surmised that while they (the KO'ers) have counterfeited the box, they didn't go so far as to stamp the box with that number like Takara did. Turns out I was right.

You'll see that the bottom right of the box (of the legit Takara version) has a stamp with "G1214". And if what I know about lot number is true, the 14 at the end probably means "made in 2014", but I digress. I think most figures of the same type and mold will have the same lot number, especially on such a limited run like this. So all legit MP BAPEs should have that number.

Below this, is the bottom of the KO box (I'm not bothering with other angles cause they're the same as the legit). You'll notice a couple differences, mainly that there's no bar code, and no lot number stamp. And BOOM. You just confirmed a sealed BAPE to be a KO.

SECOND: The Figure
The legit BAPE uses the MP10B (Black Convoy) variation of the mold, which has the (molded) Autobot insignia removed, so both shoulders are smooth and clean. The left shoulder is where said insignia should be, but the BAPE logo is there instead, and the right one has nothing.

The KO was molded from one of the original MP10s, and thus has the molded Autobot insignia on the left shoulder. so in turn the bape KO has something on each shoulder. the bape logo is on the opposite shoulder it should be, because of the molded insignia is obviously still there.

In closing, I hope this helps cause I wasn't able to find this info anywhere else. Being able to tell if something is a KO or not is pretty easy in hand, but in the age of internet buying you really have to be careful. And while most people selling these KOs clearly state what they are, it doesn't mean there won't be someone trying to pass one off as the real deal.