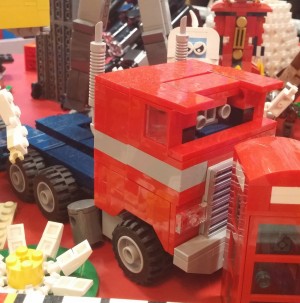 Seibertronians, just recently I paid a visit to the Legoland Discovery Center in Kansas City, Missouri. One of the features of the attraction is a Lego "Factory tour" that goes through not only the production of the plastic bricks themselves, but the design and creation of the sets the are out on store shelves. To demonstrate this to the public, they have one of their Master Builder designers stationed there, so you can get a closer look inside the sometimes very secretive world of Lego set design.

At his station, the Master Builder has many custom models that are obviously not and were never planned to be sets, but more examples of his impressive building skill, showing off hyper-detailed, clever representations of characters or items from popular culture. This included Pikachu from Pokémon, the Tardis from Doctor Who, and BB-8 from Star Wars. But some familiar Robots in Disguise also made appearances amongst the builds, Megatron and Optimus Prime! The stunning models show the outreach of our beloved brand, where even one of the fellow top toy makers of the world is paying homage to it.

Check out the photos below!!