Transformers Bumblebee Movie Cassettes Given Out By Paramount Australia 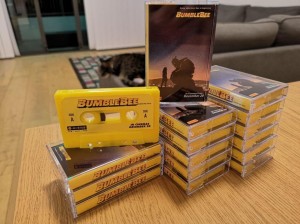 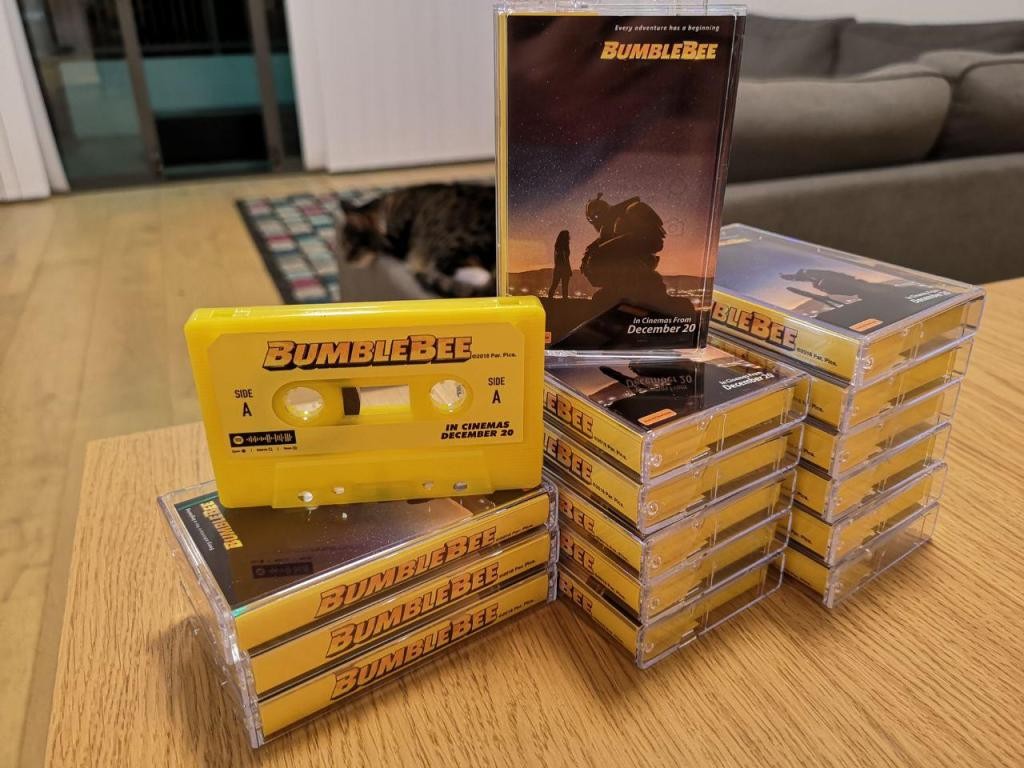 Now why it looks like the promotion has ended, Australian site Ausdroid has gotten their hands on some and are giving them away to Australian fans who couldn't make it to one of the installations. To enter, go to the Ausdroid website and enter using the form at the bottom of the page, Australian residents only mind.

All non Australians will have to make do with the Spotify list and the ability to make your own 80s Bumblebee soundtrack from preset selections over on Bumblebee Rewind dedicated website. 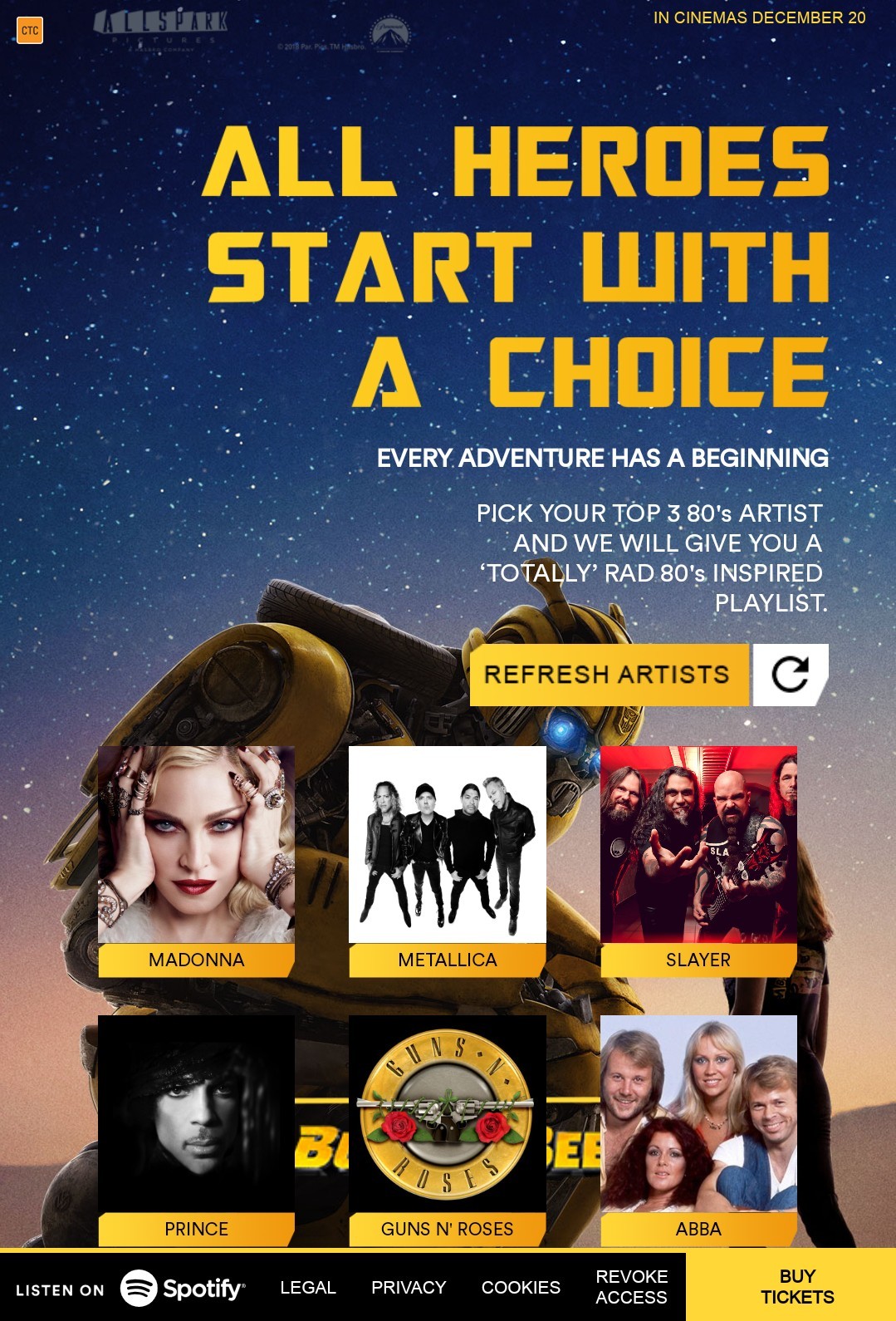 This site allows you to make your own playlists, share them with friends and play them through Spotify itself.

Will you be listening to this list and be getting into the eighties mood? Let us know in the Energon Pub and stay tuned to Seibertron for all the latest news and reviews. 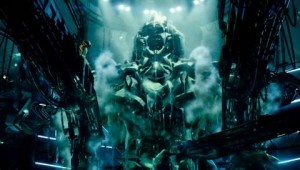 So with all this debate for the months prior about what kind of film Bumblebee was, Travis Knight is being extreamly precise about its status within the Bayverse. It seems its status as a prequel was decided off the bat and now Mr Knight reveals how that stopped him from having Megatron in the film's Cybertron scene, something he wanted and even storyboarded.

Here are the actual quotes from io9:

“I had this whole thing boarded where we’re where we see [Decepticon leader] Megatron and he comes in like Sauron, just blowing shit up and laying waste to everything,” Knight said. However, he then realized in this world, Megatron is currently frozen on Earth, as seen in 2007's Transformers, so that was out.

“So even though I really wanted to see G1 Megatron on the battlefield at the fall Cybertron, I couldn’t do it,” he said. “But I wanted to fit as much of this G1 stuff I loved in there, and so I put my favorite characters in. Obviously there are ones I wish I could put in there, and I would love to see an entire movie about the fall of Cybertron because I think it’s awesome, but just to be able to visit it for a moment, to see the Cybertron of my imaginations on the big screen, it was a real thrill.” 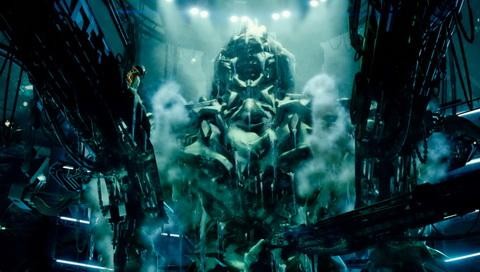 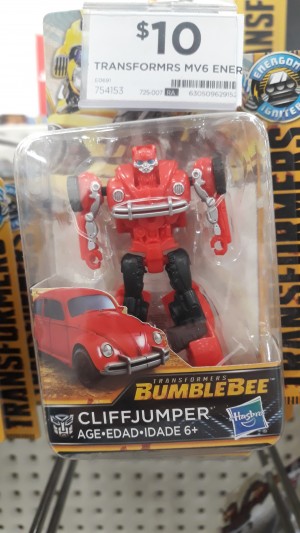 We saw a red redeco of Nitro Speed series (aka Legion class) Bumblebee recently, but we did not get a good look at it. We couldn't even confirm that it was indeed "Cliffjumper" written on the packaging. Well now we can. Friend to the site Prismartyr gave us a nice little scoop with our best look at the figure yet. They managed to spot a Speed series Cliffjumper in the Big W at Tuggerah, New South Wales, Australia today.

We now see that there is no retooling from the yellow VW Speed series Bumblebee, it is just a redeco. While Cliffjumper does indeed share the same body as Bumblebee in the film, it is Bee's Cybertronian body he has and not the VW body. Still, the theme of having similar bodies is there and better yet this becomes a fun homage to the red Bumblebee toy released in G1. 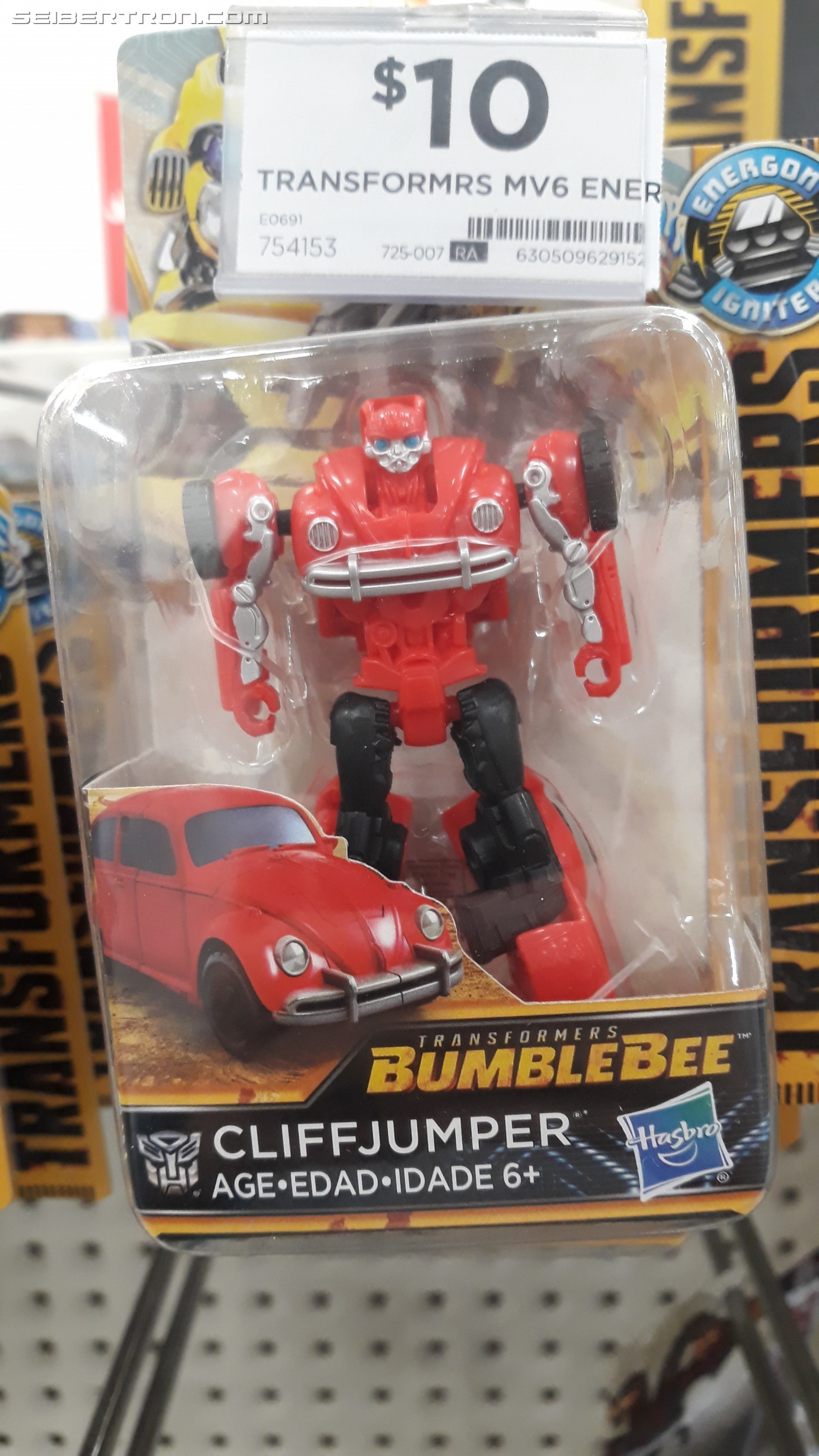 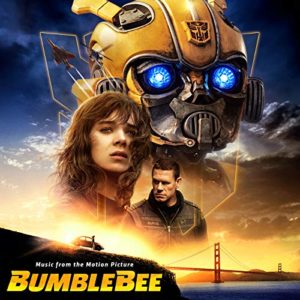 Both the Bumblebee movie music score and the soundtrack albums come out tomorrow in the US. We are told that the score is even available on iTunes right now (this may depend on your region). Below are the full track lists of each album where we can see that Stan Bush's the Touch is included as well (Good on you Stan!). We also have an interview with the Bumblebee music editor Mark Willsher to share with you. The interview is spoiler heavy, so you can click here to read it on Air Edel Music's web page.

The Score by Dario Marinelli includes the following tracks:

The Soundtrack features the following songs: 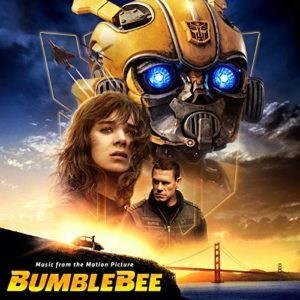 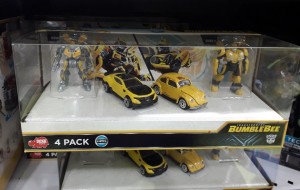 Thanks to fellow Seibertronian Barricade.it we have our first look and sighting of a new die cast 4 pack for the Bumblebee Movie from Simba Dickie. The set was found at a Leclerc-CONAD store in Teramo, Italy for €17.90. The pack features both a Hot Wheels-size Volkswagen Beetle version of Bumblebee from the movie that shares his name as well as a figure of Bee from the same movie along with a similarly styled pair of Bees based on his The Last Knight incarnation. All in a nice display box. The VW Bee appears to be the same as the one we saw in November sold on its own. It is unknown if the figures are also die cast or just the cars. 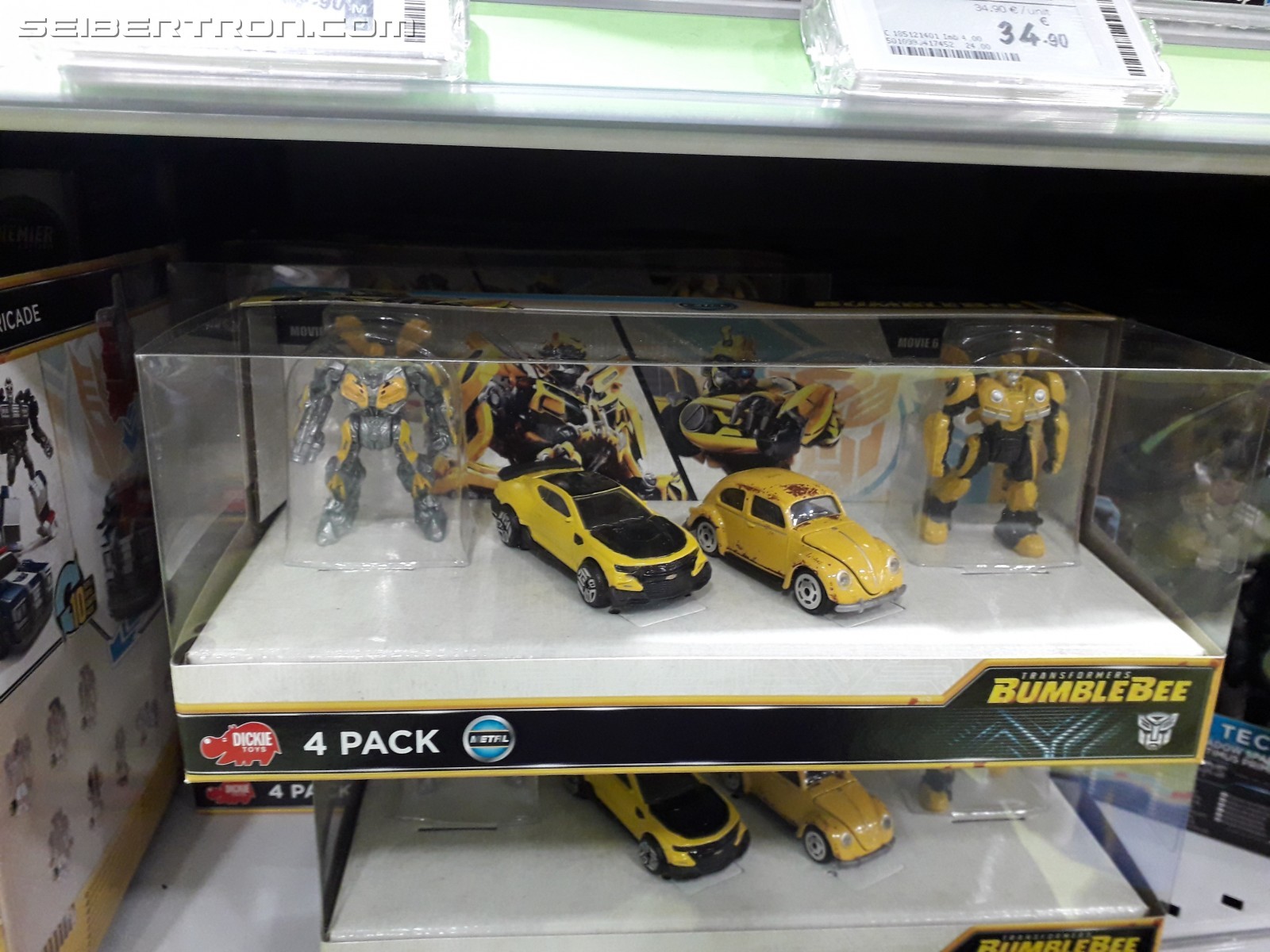 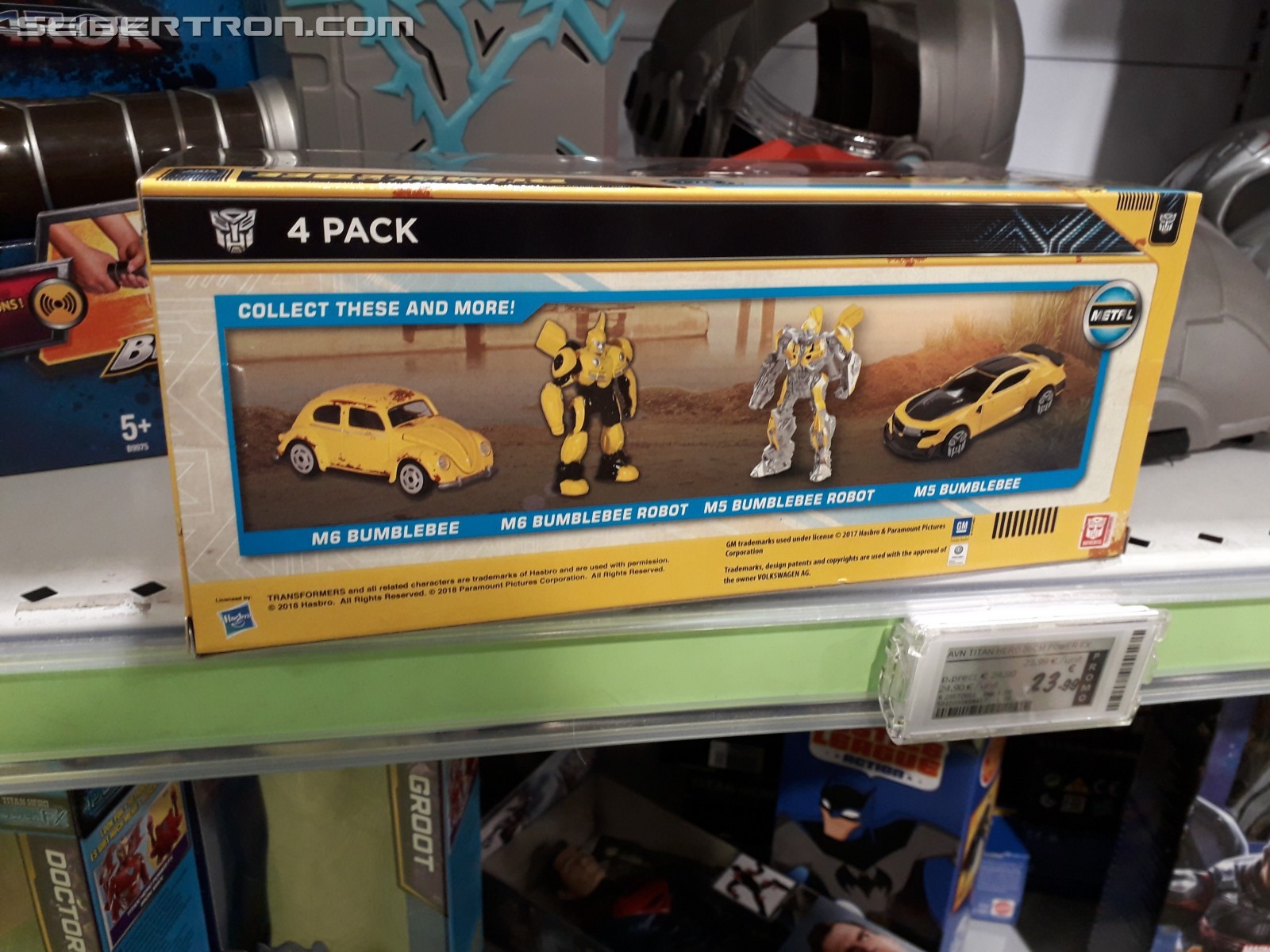 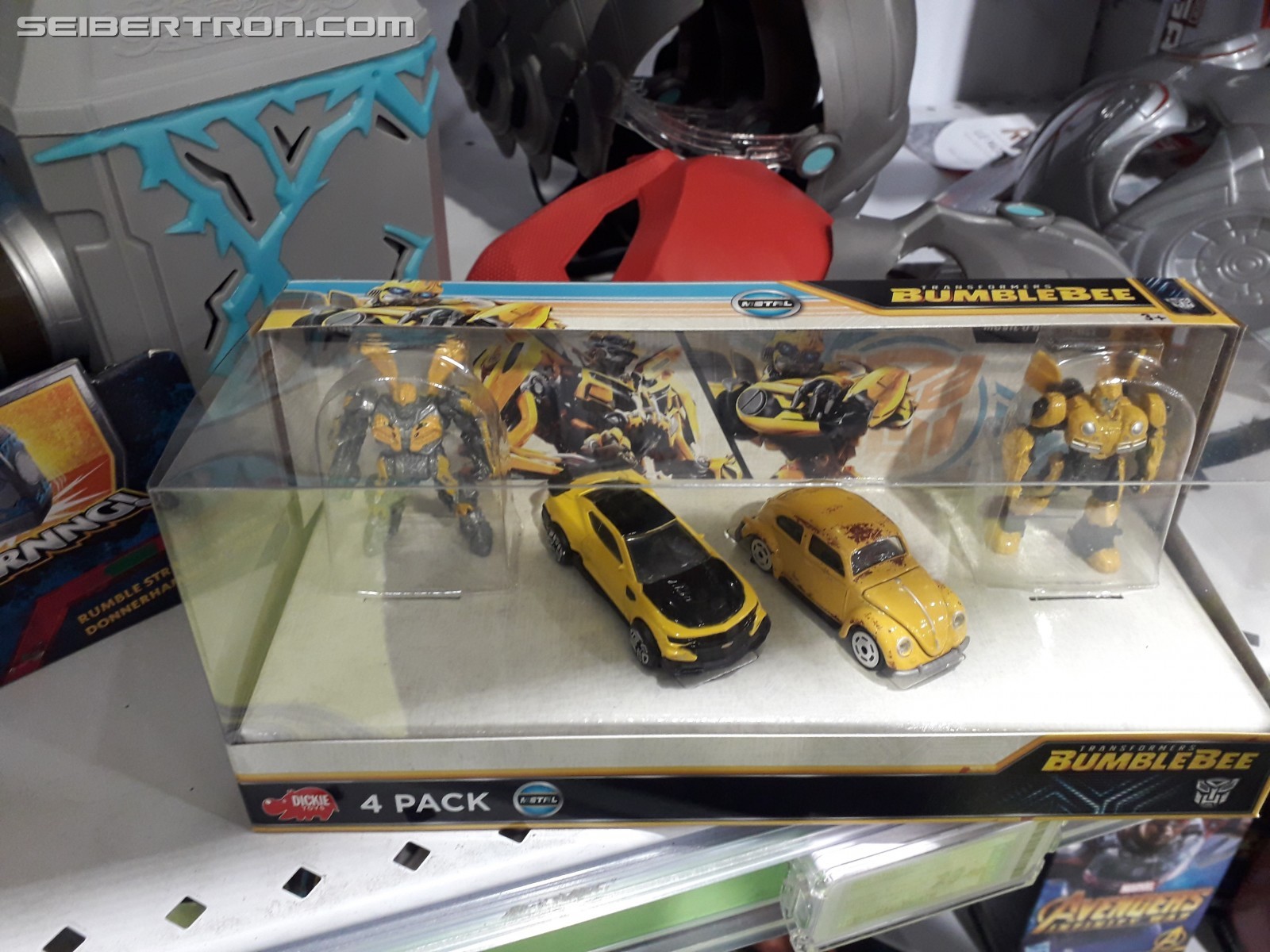 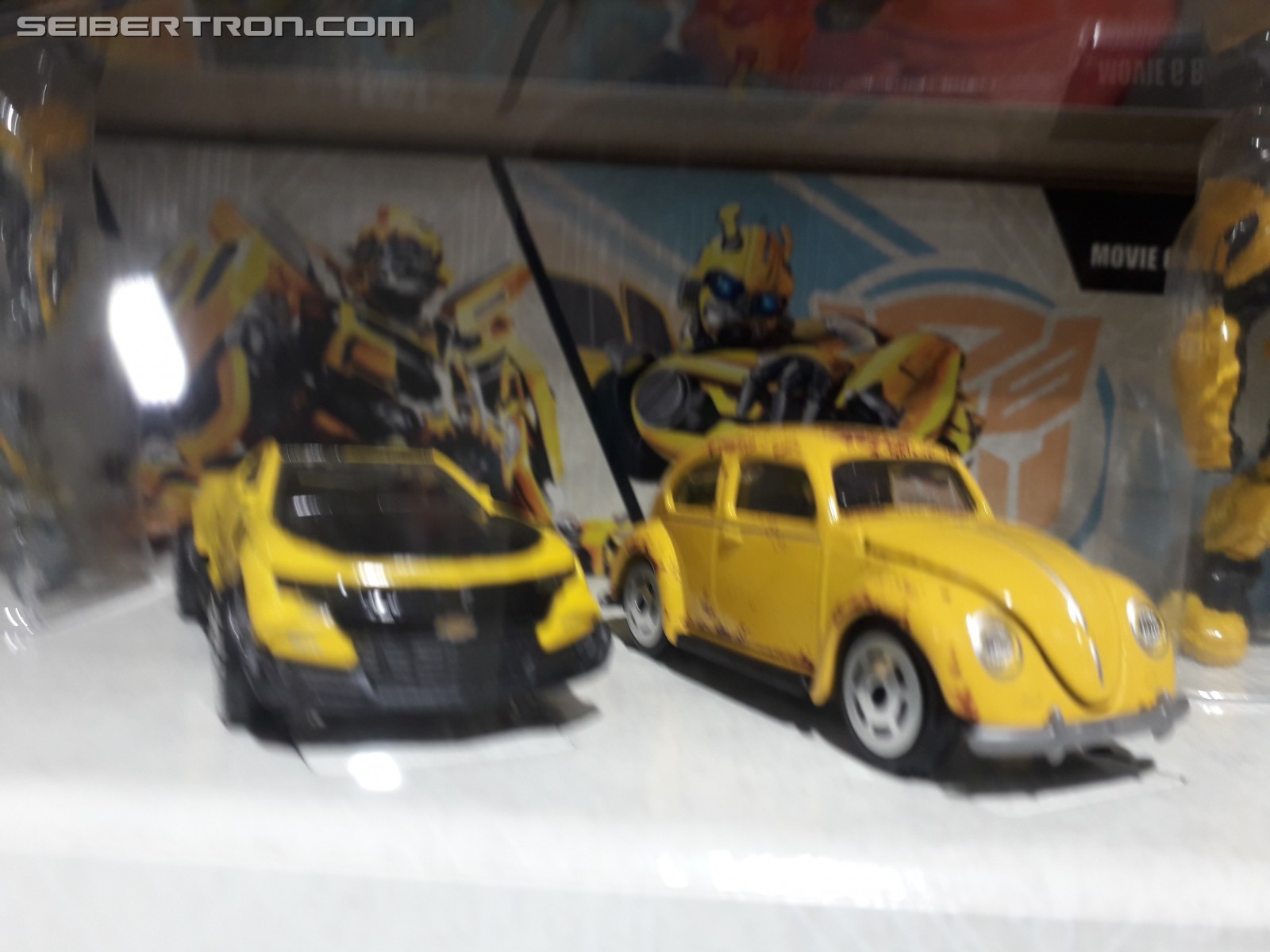 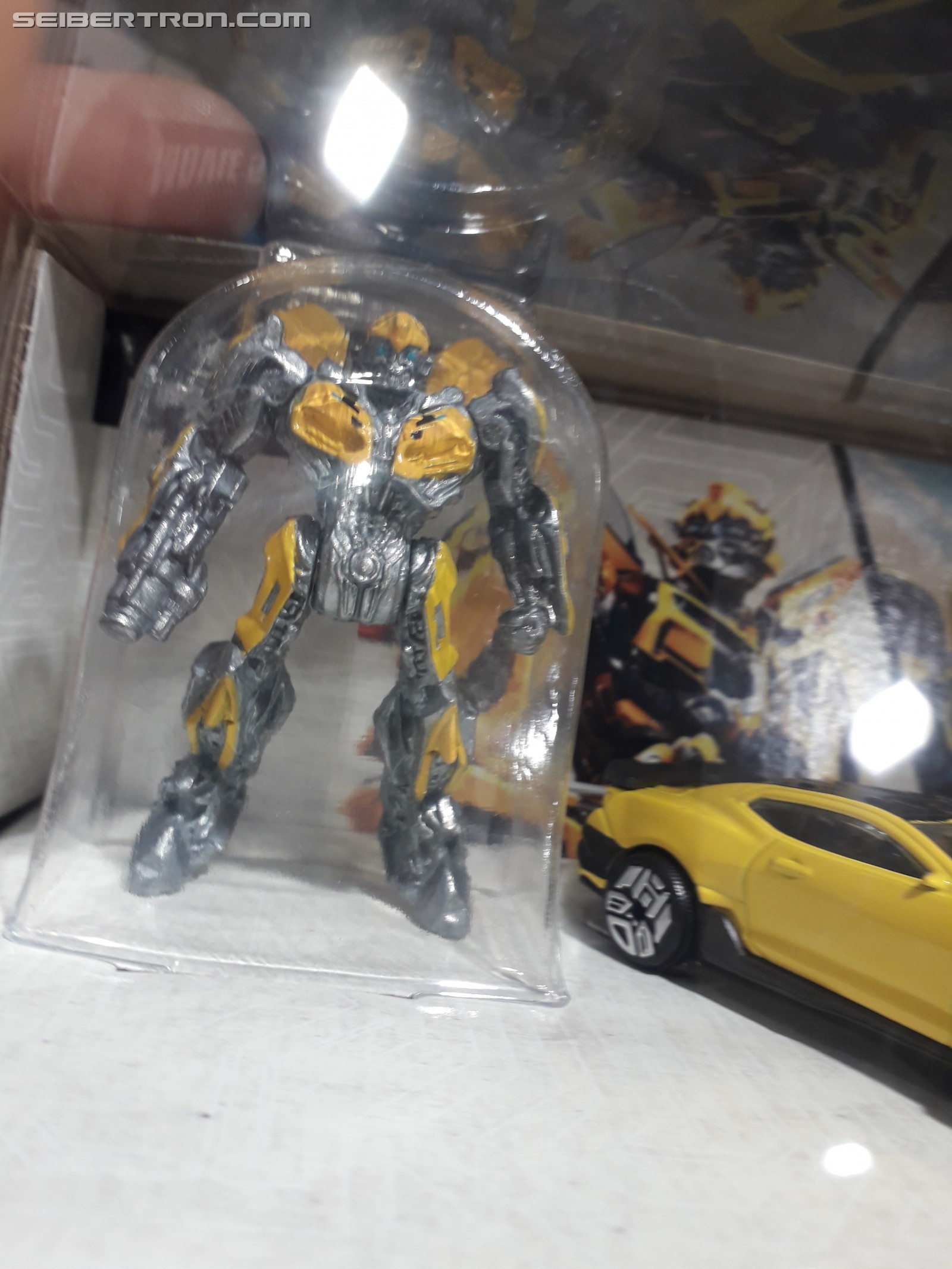 So what do you think? Like non-transforming die cast cars? Think Jada Toys does it better? Sound off in the Energon Pub! 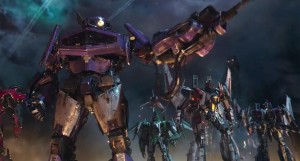 A big question regarding the Bumblebee movie was whether or not it was a reboot. We know the producer Lorenzo Di Bonventura said he would not call it that but now we have confirmation from the director, Travis Knight, that the Bumblebee movie is within the pre-established "Bayverse" continuity, whatever that may mean to you.

These were the exact words:

We set the film 20 years prior to the events of the first film, but so-we still needed some degree of continuity there.

So there you have it folks, the Bumblebee movie may be a step in the right direction, or a breath of fresh air, but it is not a full on reboot, and it is still embedded within the universe Michael Bay helped bring to life (Michael Bay is still a producer on this film after all).

Of course, that is not all Travis Knight had to say in the featurette below from IGN. He talks a lot about his choice behind the design changes we see in the movie and the heavy emphasis on G1. There is a really fun tidbit about Soundwave's chest window too, enjoy! 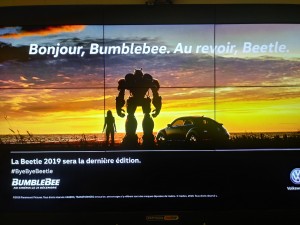 For those not in the know, 2019 will be the last year Volkswagen will be releasing the Beetle. Their ad campaign for this farewell features the Bumblebee movie. The ads have been found in a variety of places. You can see a quick video below as well as a french ad from Montreal, Canada.

Of course, this isn't the same Beetle Bee transforms into, the car they wll be retiring is actually the second attempt at remaking the classic Beetle for the mdoern era.

Also remember, the Bumblebee Movie comes out tomorrow in several markets. If you wish to discuss everything about it including spoilers, you can head over to the spoiler thread. 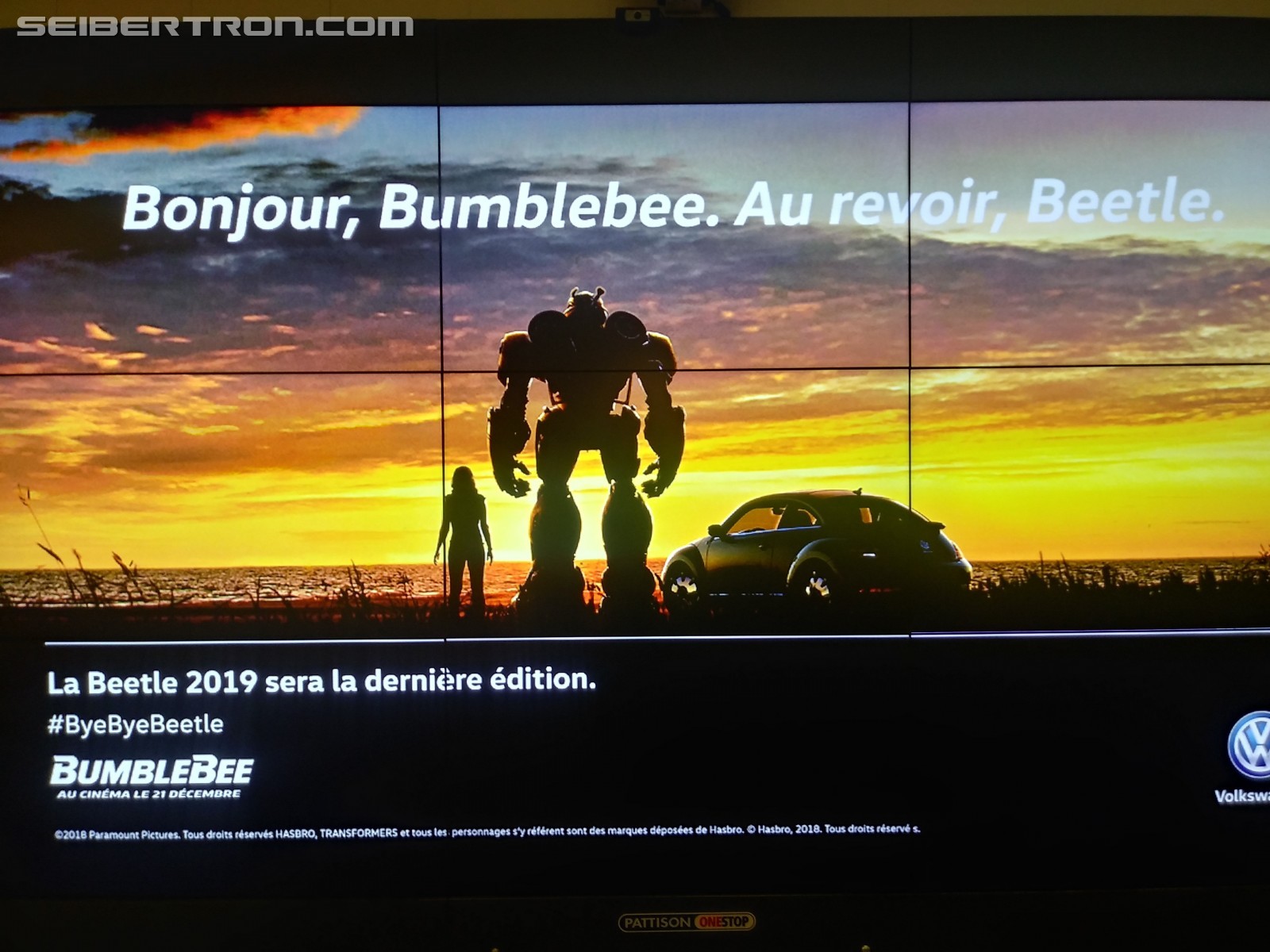 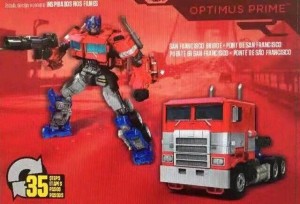 Earlier today, we put up two news articles on the instruction manual and robot mode image of new Studio Series 38 Voyager Class Optimus Prime, from the Bumblebee film. Following that, we have a leaked image of the back of the box of the said toy, thanks to 本-阿弗莱克- on baidu.

It shows us our first look on his alternate mode which, shock of shocks, is very inspired by the truck in the G1 cartoon. Of course, we also get to see the stock render for his robot mode, and his 35 step conversion. We also find out the figure comes with the "San Francisco Bridge" backdrop.

So does this make you more or less excited for the figure? Tell us in the Pub forums down below! 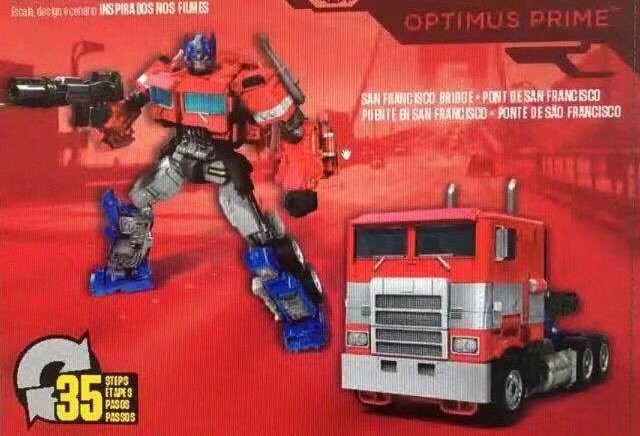 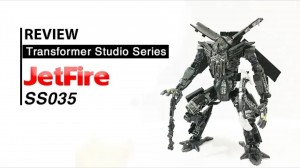 One thing to note is that TonTon does not show off the combined form of Voyager 2007 Movie Optimus Prime and Jetfire and it appears as though that will get a video of its own.

We have embedded the video below for your convenience:

What do you think of Jetfire? Will you be adding him to your collection? Let us know in the Energon Pub and stay tuned to Seibertron for all the latest news and reviews.

Take a better look at Nitro Series Dropkick and Blitzwing 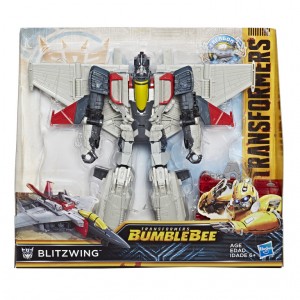 After Hasbro made a surprise tweet revealing the existence of Nitro Series Dropkick and Blitzwing we now have a clearer look at the pair. Coming from regular breaking news source Snakas we get to see a better view of Blitzwing in package and Dropkick in what looks to be a series of stock photos. As with other Nitros they come with Energon cores to enhance their alt modes.

Articulation is pretty minimal like the rest of the line, but is that double elbows I see on Dropkick? Sure, it's all for the transformation, but take the extra range of motion where you can get it. I mean, Nitro Bumblebee doesn't even have elbows and it's his toy line! 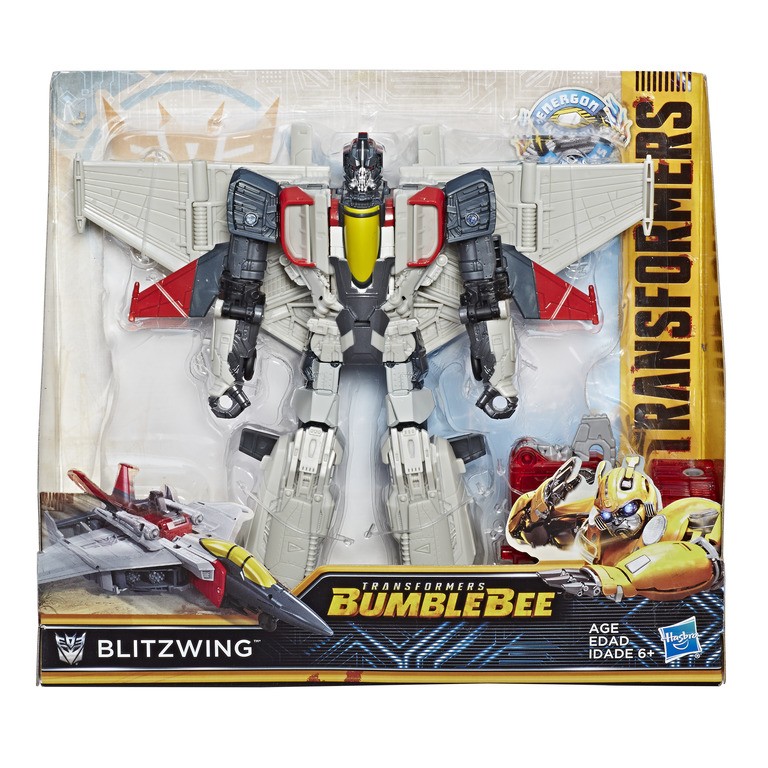 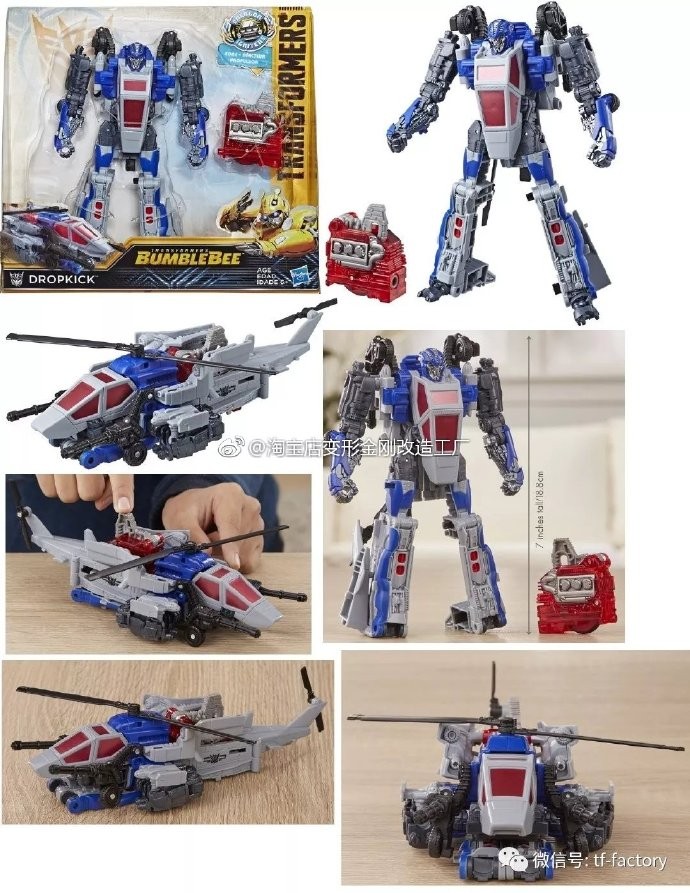 So what do you think of Nitro Dropkick and Blitzwing? Sound off in the Energon Pub and keep coming back to Seibertron for all the latest Transformers news.