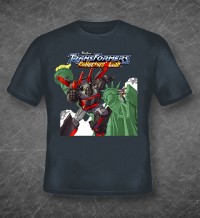 In an update on the Official Transformers Collectors Club website, preorder dates for Club Exclusive Shattered Glass Drift and Runabout have been slated for next week. Along with the figure pre-orders is a new TFCC T-shirt featuring Runabout. To learn more about these awesome offerings from the Official Collector Club, click here to head over to their website! 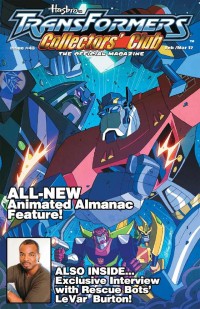 The Official Transformers Collectors' Club has posted the cover and preview of their soon to be shipped club magazine issue 43. The cover (see thumbnail, click here to get a better look) features Animated Motormaster and Optimus Prime by artist Marcelo Matere. Here's what you can expect inside:

LeVar Burton sat down with the TCC to discuss his cartoon character and offer a behind the scenes look at Transformers: Rescue Bots. Jim Sorenson and Bill Forster bring us the first installment of the new Transformers: Animated Almanac Addendum TCC feature (with an awesome magazine cover to tie in to the new feature). MTMTE Profiles spotlighting the amazing art of Matthew Armstrong debut this issue as well. And if that wasn't enough, Flint Dille fleshes out a deleted scene from the original Transformers Animated movie, brought to life in the all-new Transformers story "A Flash Forward"! This is first time a deleted scene from the '86 movie has been illustrated in comic form and can be seen now, in Issue 43 of the Transformers Collectors' Club Magazine! 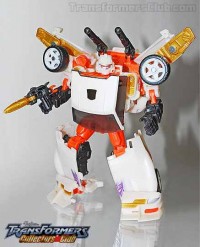 The Official Transformers Collectors' Club has posted a production sample of this year's membership incentive figure Runamuck in robot mode to their homepage. This gives us our first real look at the new head sculpt based on designs by artist Dan Khanna.

You will need to have an active TFCC membership by March 16th to receive this figure for free. Runamuck's companion figure Runabout will be a TFCC exclusive figure for 2012 along with Shattered Glass Drift. TFCC states pre-orders for the 2012 exclusives should go up later this month. Image mirrored below. 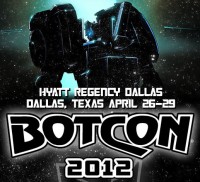 BotCon has posted a preliminary schedule of this year's events. The contest guidelines are also available by clicking here.

Please note that this is all preliminary and times and events are subject to change.
This is also not inclusive of all activities.
Wednesday, April 25th:

Quick update on the pre-order status of the 2012 TFCC exclusives Shattered Glass Drift and Runabout. The club has tweeted that we can expect the pre-orders to open in the last week of this month and both should be under $60.00.

Right now, the TENTATIVE date for Runabout and Drift pre-orders are last week of January. Maybe even the last day of January.

Both Drift and RunaBOUT should be under $60. That is the HIGH end, but for "budgeting", there you go...

The Official Transformers Collectors' Club have posted what appears to be a production sample of the 2012 membership incentive figure, Runamuck. The figure is redeco of the Generations/RtS Wheeljack/Tracks mold with a new head sculpt. You will need to have an active TFCC membership by March 16th to receive this figure for free. Runamuck's companion figure Runabout will be a TFCC exclusive figure for 2012 along with Shattered Glass Drift. TFCC states pre-orders for the 2012 exclusives should go up later this month. Image mirrored below. 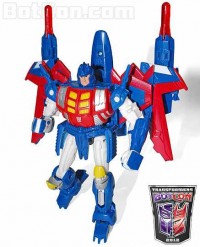 BotCon has revealed the final figure in this year's convention exclusive "Invasion" boxset, Metalhawk. The figure is arepainted version of Generations Deluxe Thunderwing with a newly sculpted head. The figure's robot mode is intended to resemble Metalhawk's Pretender shell. Images mirrored below.

Here's a piece of Metalhawk character art from the Heroic Autobot facebook page: 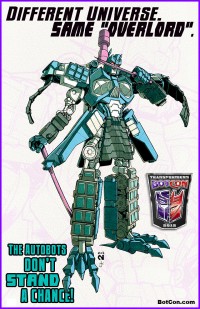 Non-attendee Iacon packages are now avialable for all you fans who can't attend this year's BotCon in Dallas, TX April 26th - 29th, but still want to get this year's "Invasion" boxset. Click here to visit the BotCon 2012 homepage and get registered!

BotCon has also supplied us with the following press release and character art for "The Overlord" (Gigatron) courtesy of the Nick Roche and Josh Burcham.

Fort Worth, TX – January 18, 2012 – Fun Publications, Inc., licensee for Hasbro’s official Transformers Collectors’ Convention, BotCon, announced today that fans can now register for both the attending “Primus” package and the non-attending “Iacon” package, featuring the amazing 6-figure box set Transformers: Invasion. This year’s award-winning convention will take place at the Hyatt Regency Dallas from April 26th to April 29th. Fans and collectors who register for BotCon as a Primus package holder will receive (in addition to the 6-figure convention box set): admission to the Friday private sales room experience, all panels and seminars throughout the weekend and the Hall of Fame Celebration party held Saturday night. Finally, Primus package attendees will also receive a special bonus Transformers Deluxe figure to go along with their convention box set. General Admission for non-registered guests will be available on Saturday and Sunday only.

Each year, BotCon strives to provide fans that attend the show a first class event while also giving those who can’t attend an opportunity to bring home part of the action. The BotCon box set has become the exclusive “standard” within the Transformers collecting community and the 2012 box set once again takes it to a whole new level, featuring the first updates of characters such as “The Overlord” Gigatron and the Pretender Metalhawk.
BotCon is in its 18th year and will once again feature a large dealer room with thousands of Transformers collectibles as well as other toys such as Star Wars, G.I. Joe, Marvel figures and many other great collectibles from the 80’s, 90’s and modern day! Also featured at the show will be some amazing special guests, IDW, Activision, comic book artists and many other events/highlights for fans of all ages to enjoy!
For more information on BotCon, the weeklong activities and the exclusive figure offerings, please visit BotCon.com.
About Hasbro
Hasbro, Inc. (NASDAQ: HAS) is a branded play company providing children and families around the world with a wide-range of immersive entertainment offerings based on the Company’s world class brand portfolio. From toys and games, to television programming, motion pictures, video games and a comprehensive licensing program, Hasbro strives to delight its customers through the strategic leveraging of well-known and beloved brands such as TRANSFORMERS, LITTLEST PET SHOP, NERF, PLAYSKOOL, MY LITTLE PONY, G.I. JOE, MAGIC: THE GATHERING and MONOPOLY. The Hub, Hasbro’s multi-platform joint venture with Discovery Communications (NASDAQ: DISCA, DISCB, DISCK) launched on October 10, 2010. The online home of The Hub is http://www.hubworld.com. The Hub logo and name are trademarks of Hub Television Networks, LLC. All rights reserved.
About Fun Publications, Inc.
For over 15 years, Fun Publications, Inc. has been a Hasbro licensee offering fans and collectors of pop culture memorabilia news, exclusive product and family events through different print offerings, websites, collector clubs and brand specific conventions such as GIJoeCon and BotCon. Located in Fort Worth Texas, Fun Publications reaches a large audience, serving the United States and many other countries such as Japan, Great Britain, Brazil, Australia and Canada. For more information visit TransformersClub.com, GIJoeClub.com, GIJoeCon.com, and BotCon.com. BotCon is a registered trademark of Fun Publications, Inc. (C) 2011 Fun Publications, Inc. All rights reserved.
GIJoeClub.com, GIJoeCon.com, and BotCon.com. BotCon is a registered trademark of Fun Publications, Inc. (C) Fun Publications, Inc. All rights reserved 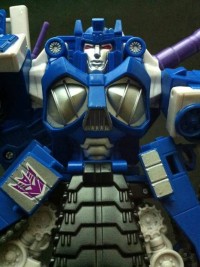 The Transformers Galaxy Hong Kong Fans Group have manged to get their hands on this year's BotCon exclusive Gigatron (Overlord) from the "Invasion" boxset. They've posted a couple of preview images of the figure in both modes, which are mirrored below. They will most likely be posting a more extensive gallery later on. Check out the images below. 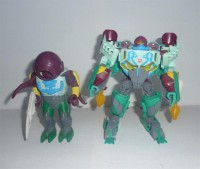 Full Metal Hero's Stripe has gotten his hands on the BotCon exclusive HFTD Voyager Sea Spray repaint, Shattered Glass Otcopunch, and posted a pictorial review. Click here to view the rest of Stripe's images and read his review of the figure.