The all-new-just-announced Kreon Micro-Changers which Hasbro unveiled last week at SDCC, have already begun showing up at a couple of comic book stores. Thanks to Fishformers for figuring out how to match the stamped numbers on the packaging of this blind packaged toys to the product numbers of the toys themselves.

With a case in hand, Seibertron.com can confirm that the numbers do indeed match up for all 6 figures which we provided proof with via the pictures below.

The instructions also show how to convert the Kreon Micro-Changer from robot to alternate modes. The figures do not transform. Instead, you will need to "rebuild" the figure much like you do with the larger Kre-O Transformers sets. 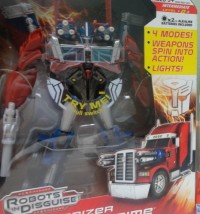 Hot on the heals of the first US sighting, UK based seibertron.com member AdamPrime has come across a couple Weaponizers Bumblebees at his local Tousrus in Exeter, Devon.
He hasn't seen any Optimus Primes though, and the price he quotes is GBP Sterlin 34.99

For those who do not know, Weaponizers are a new range of Transformers toys roughly at the Leader scale with an emphasis on weapons reveals. Currently the only two are Optimus Prime and Bumblebee.
The following reference images are taken from the earlier article on the figures being available at Walmart.

Stay tuned to seibertron.com for all your transformers related news!

You want even more toy news you say? You've got it!

News submitters cdavid3 and ssjgoku72000 have provided us with the links to Wal-Mart's sale pages for both the Optimus Prime and Bumblebee Weaponizers, and the Remote Controlled Bumblebee and Knock Out from the PRID (Prime: Robots In Disguise) toyline!

As you may recall, Weaponizers are the supposed "Leader" Class assortment for this toyline, though they're close to Ultra Class figures, instead. Each of the figures comes with light effects, plus button activated weapon gimmicks.

The Remote Controlled figures are small, Voyager sized vehicles that transform with the press of a button into a chibi style robot mode, along with being fully functional R/C cars.

Will you be buying? Leave your comments in the discussion!

UPDATE: Weaponizers are now available on Amazon as well, and come with Amazon's Free Super Saver Shipping service! Both are priced at $29.99 each.

Keep your optics tuned to Seibertron.com for the latest and best in news!

In the midst of the SDCC 2012 news we have a new sighting to report, Transformers Prime Weaponizers have been spotted at retail! Weaponizers Optimus Prime and Bumblebee along with a couple of the new Kre-O Transformers sets (Battle for Energon and Decepticon Ambush) were found at a Kenosha, WI K-Mart by TFW2005 user Grimlockimus. The Weaponizers were priced at $29.99 each. Happy hunting! 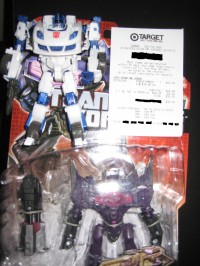 The highly anticipated Tranformers Generations: Fall of Cybertron Deluxes have been spotted at retail. Our own podcast post Counterpunch found the trio of Optimus Prime, Jazz, and Shockwave at a Target in Garner, NC priced at $14.99 each. To assist in your search here's the DPCI 087-06-1890 or just click here and enter your location. Good luck!

When you find these figures be sure to help out your fellow members by updating the sightings tool and posting in the sightings forum!

We have a trio of new product sightings this morning!

Interestingly all three sightings occurred at K-Marts. Optimus Maximus was found at a New York K-Mart by TFW2005 user Bulkhead priced at $36.49. The Bot Shots and Kre-O Stealth Bumblebee were spotted at K-Marts in Illinois by TFW2005 users JasonBlueBoost, JesseCuster, and Freezah.

Got a new product sighting of your own? We'd love to hear from you! You can submit news to us using the "Submit News" link at the top right portion of any page and post your find in our Sighting Forums.

All of these products were on display at BotCon 2012 and additional images can be found by clicking here. 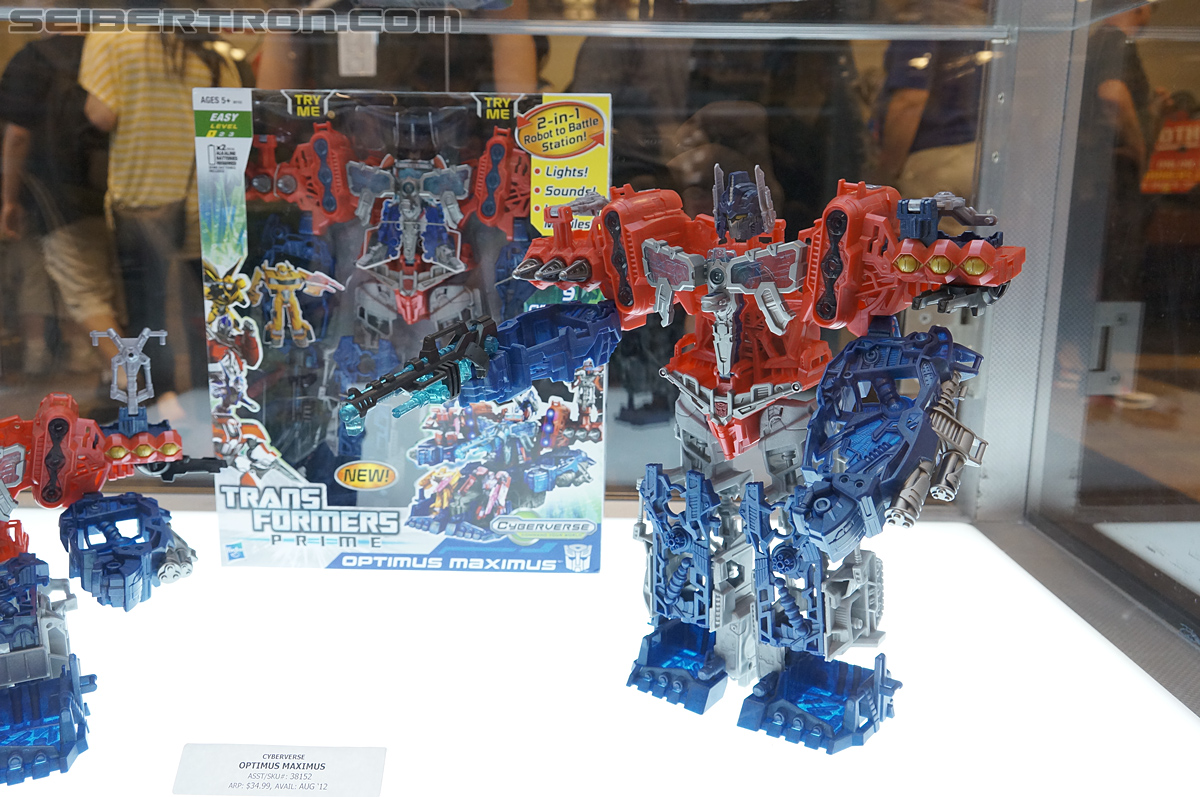 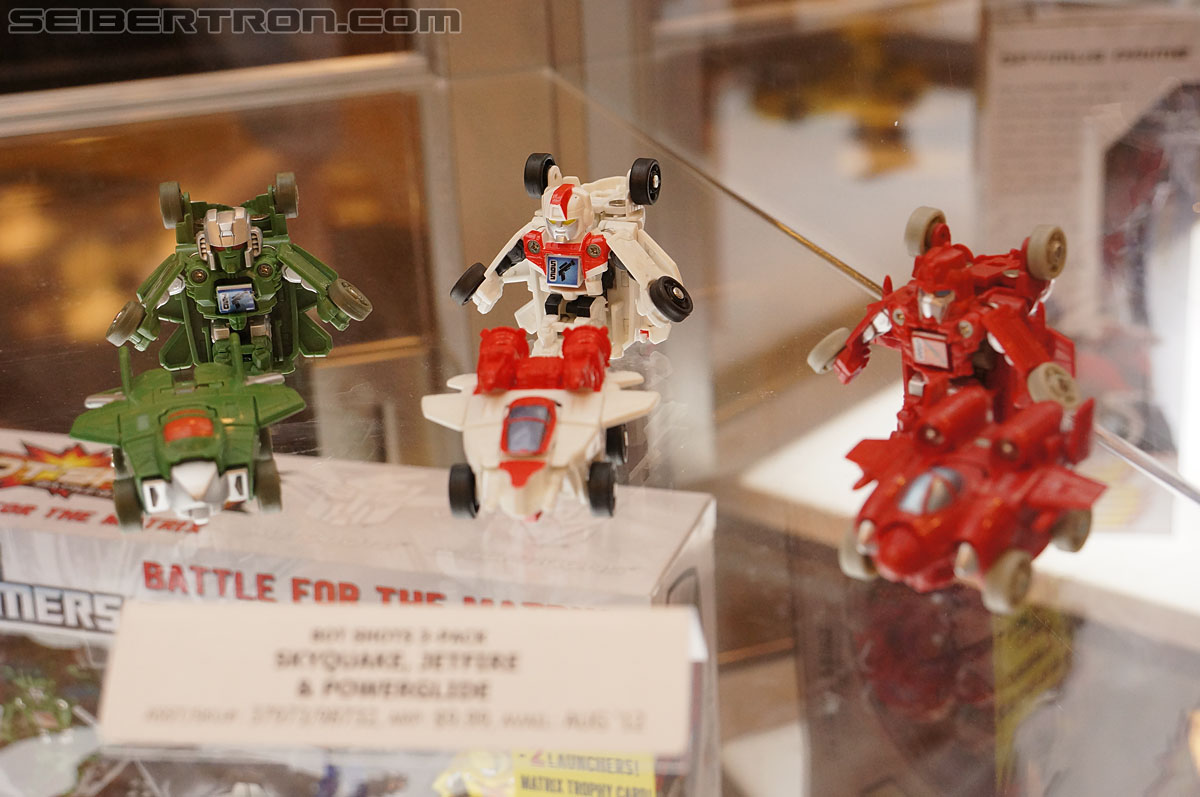 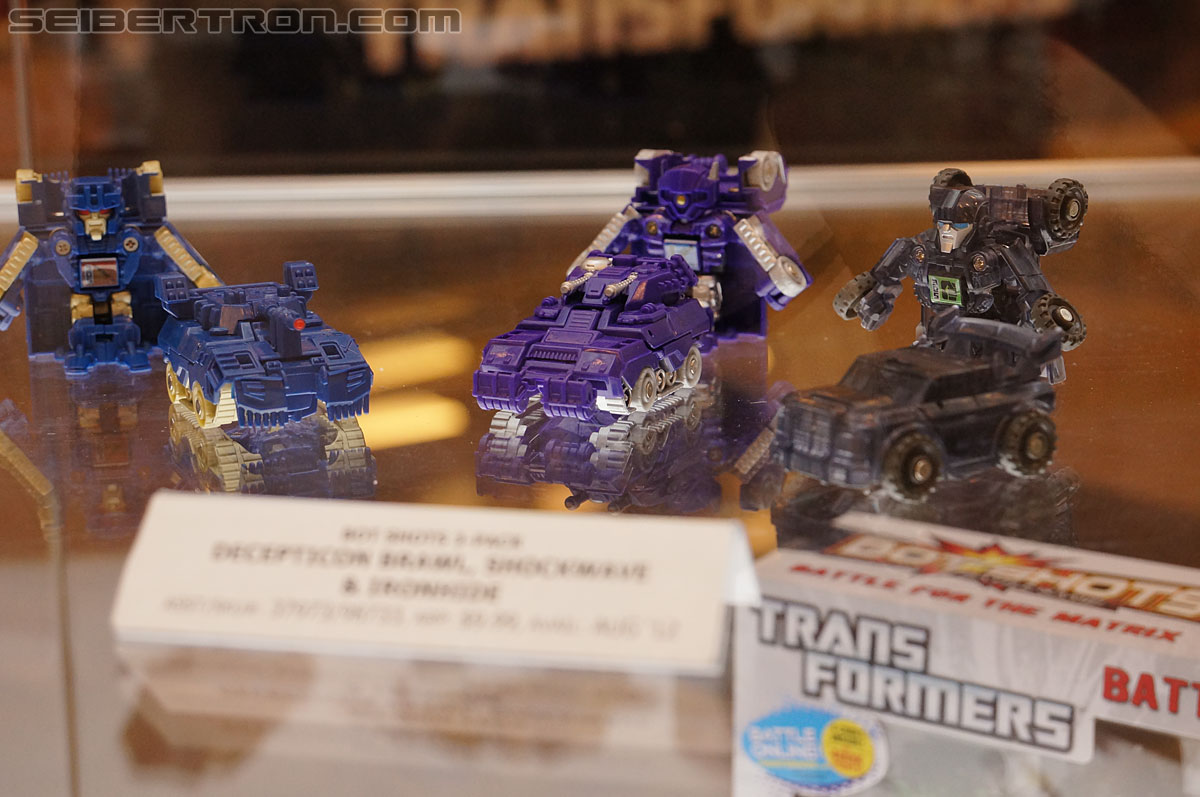 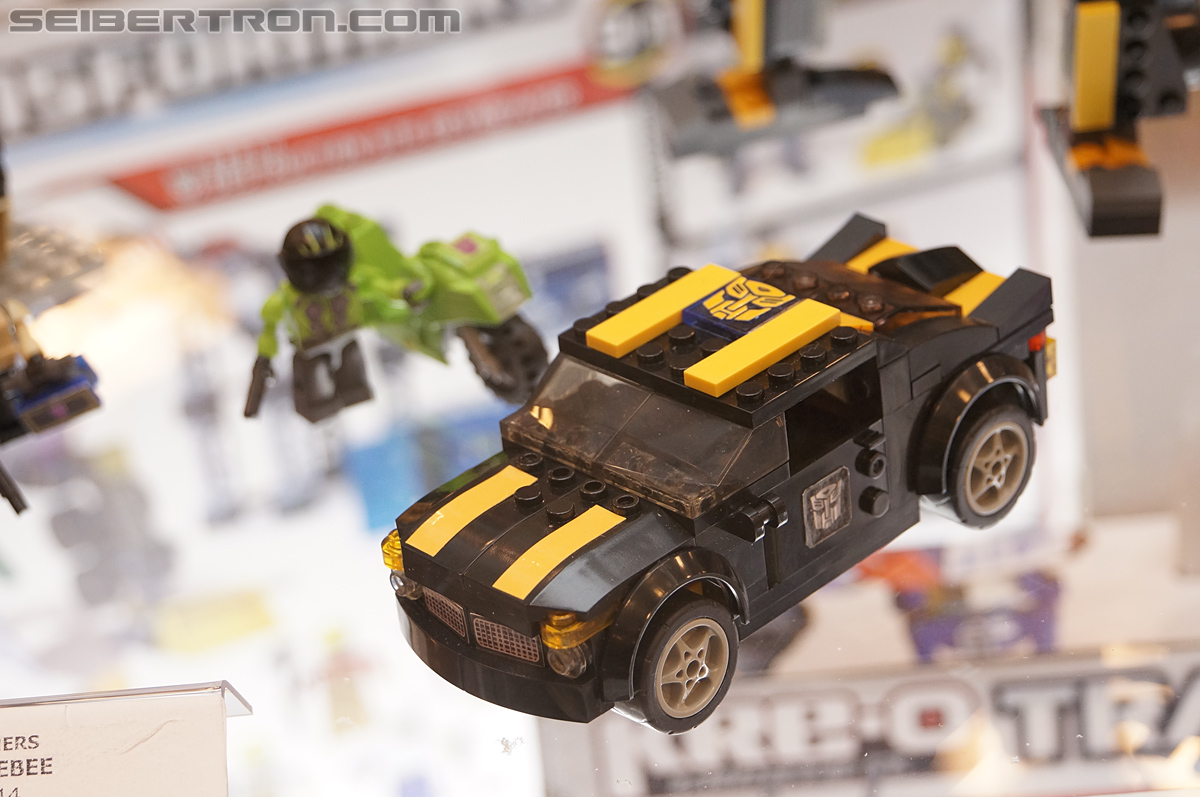 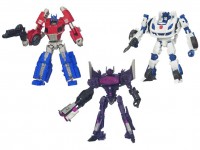 This breaking news just in from the Planet Iacon Facebook:

As you can see in the picture, this wave consists of:
-Jazz
-Optimus Prime
-Shockwave (who is also the shortpack)

Usually this means the US isn't far behind in release dates. Only time will tell, of course, but let's keep our fingers crossed! If we have new info, including sightings, we'll report it immediately.

Keep your optics tuned to Seibertron.com for the latest in breaking news! 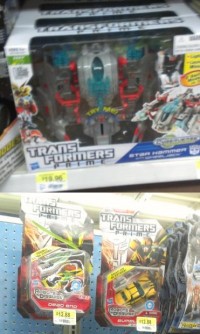 More new Transformers Prime sightings! Transformers Prime Deluxe Wave 4 and Cyberverse Vehicles Wave 1 have been found at retail. Arizona appears to be the hot spot for new product this week, both were discovered at an Arizona Wal-Mart store by TFW2005 user Stune.

The Seibertron.com galleries for these figures can be found by clicking the images below: Transformers Prime Cyberverse Commanders Wave 3 and Remote Control Vehicles Wave 1 have been sighted at retail! This wave of Commanders adds Ultra Magnus and Nightwatch Optimus Prime to the mix. Ultra Magnus was spotted at a Toys"R"Us store in the Tuscon, AZ by TFW2005 user pscoop. Remote Controlled Bumblebee and Knock Out were found at a K-Mart by TFW2005 user xion14 for $22.00 each.

All were on display at BotCon 2012 and images of each can be found right here on Seibertron.com by clicking here. 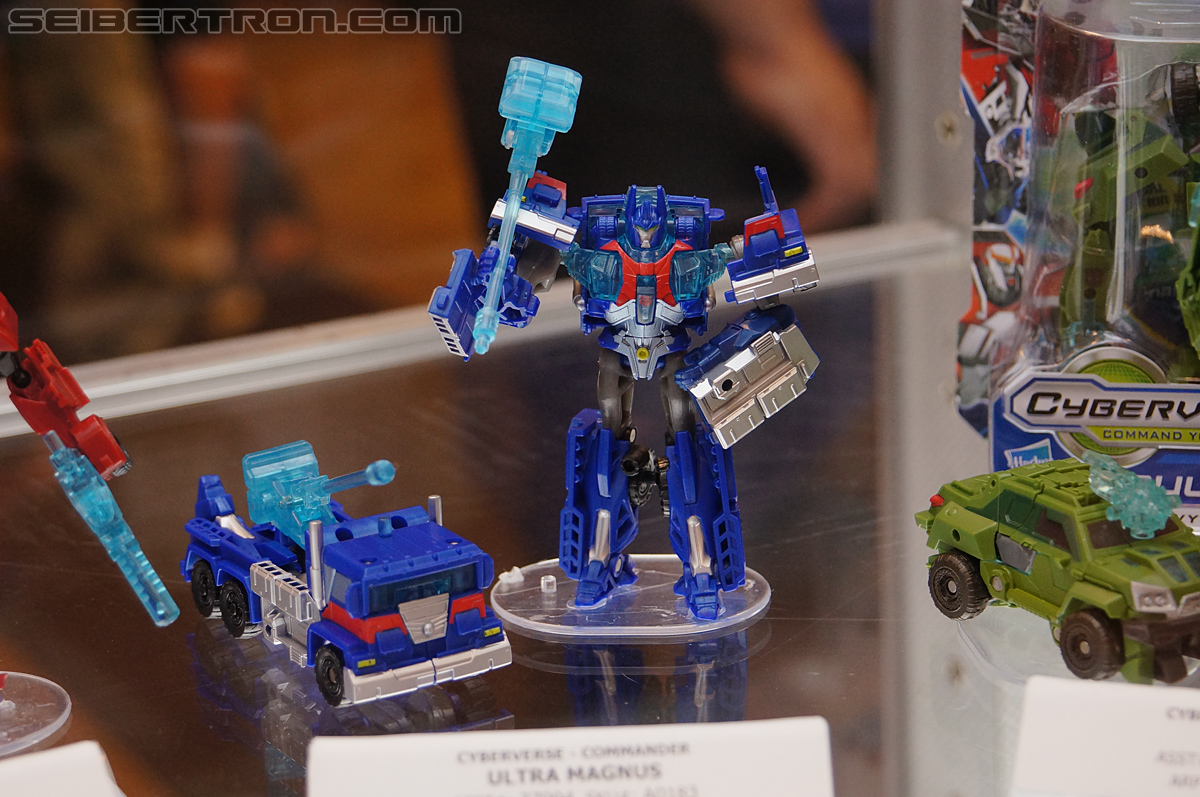 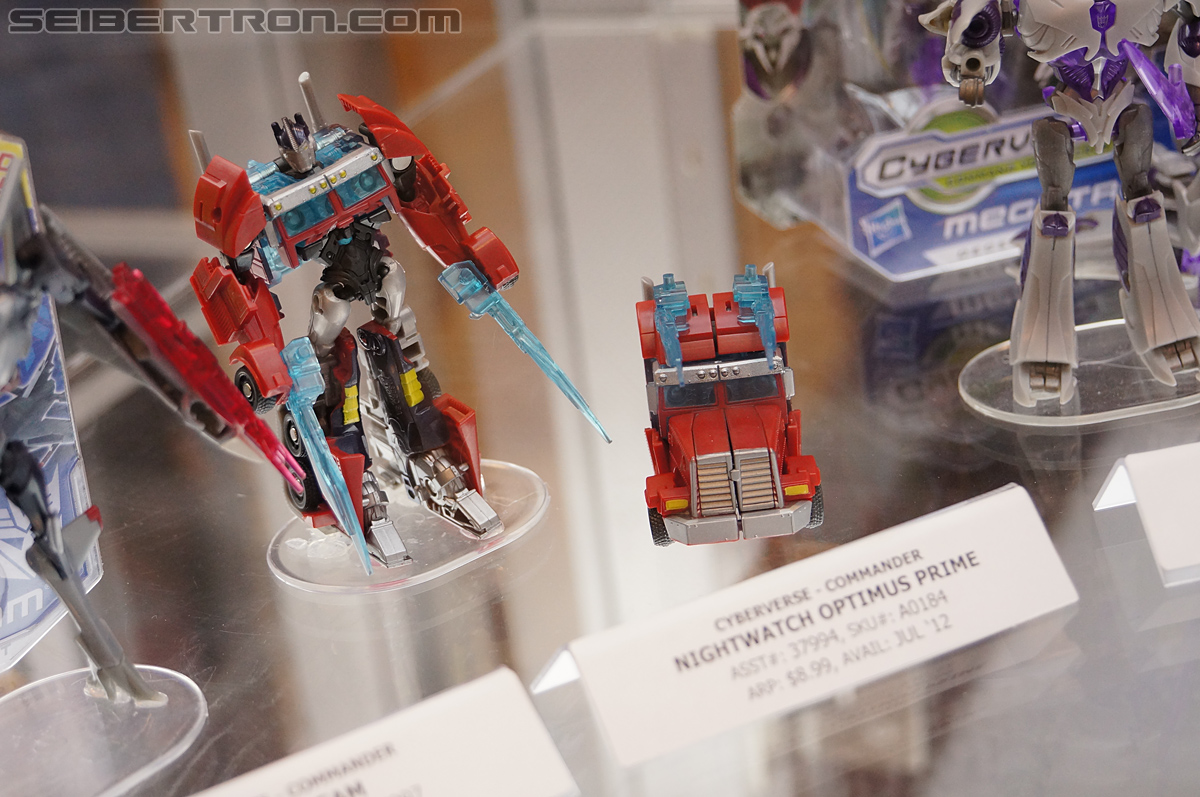 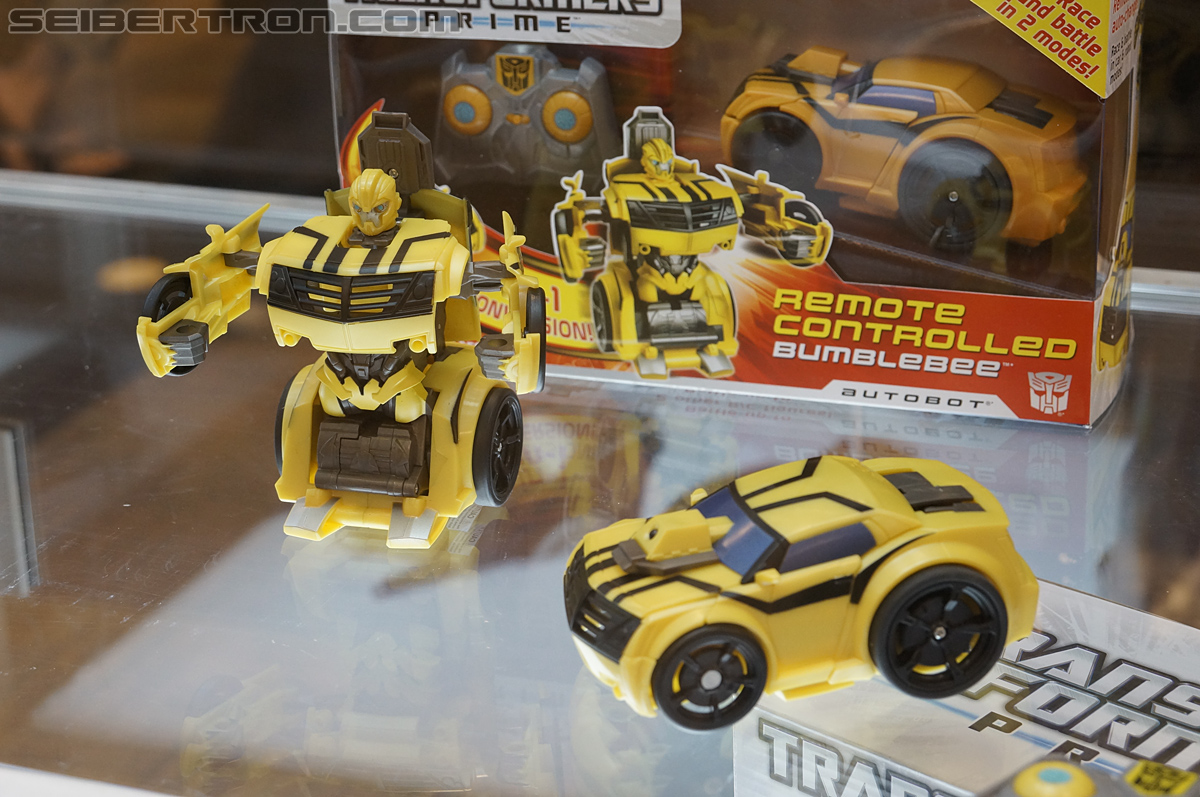 Word reaches us from Ozformers that the Transformers Prime Weaponizers have been released in Australia. Both Optimus Prime and Bumblebee were found a Target for 59 AUD. Hopefully this is a sign these two will be showing up at domestic retail soon. These are Leader Class size figures that feature weapons systems that can be deployed in both vehicle and robots modes. Click here for the Seibertron.com gallery of these two from BotCon 2012.