Big news to start the week out right! As I'm sure you've already seen, we finally have the first clear image of Devastator posted, which you can see here.

The following news is based on rumors, but the sources behimd all of it are known for their accuracy and honesty, so the info's quite solid. (That being said, please take all of this with the smallest grain of salt because Hasbro's plans are subject to change at any time.)

Fellow Seibertronian, Shajaki, found new information he compiled from fellow fansites TFW2005 and Cybertron.ca. The data he's provided has been truncated so we can get right to the point.

Among those names, he's uncovered the following:

Mr. Chaos confirms the names and UPCs of the Protectobot wave, which seems will all be available together in one wave, wave 3. (This will be the first time a full team combiner has been released in one wave, and will hopefully be a continuing trend for the future of the line.)

Wave 4 is supposed to consist of the Autobot "Masquerade homage" figures - those being Sunstreaker, Ironhide, Prowl, and Mirage.

No wave numbers provided, but Legends Blackjack, Huffer, Groove, Warpath, Viper, Rodimus, and Skywarp are also coming up in the system.
As we already know, Blackjack and Huffer are wave 2 and have begun seeing release in various Asian parts of the world.

It seems that the Transformers Battle Tactics game has been giving hints about Cyclonus all this time. In game images provided by down shift of Cybertron.ca we can see shared design details in common with Silverbolt's toy, that is supposedly the basis for the upcoming Cyclonus figure.

Not to be outdone, it seems Viper is Powerglide's recolor and strongly resembles the Rattler aircraft from GI Joe. We had originally reported on the possibility of these figures, here, courtesy of fellow Seibertronian staffer Va'al.

Some big news, big things to come, but that's not all! Fellow fan Venksta, of Renderform fame, has uncovered and shared some info with the fandom as well:

Rook, the new Protectobot recruit is a new mold figure and carries a mix of Universe (2008) Onslaught and Scout-Class Breacher from Hunt For The Decepticons, the one who was partnered with Voyager Class Sea Spray in that same line. Venksta goes on to say that it's a six-wheeled, SWAT-type vehicle, while lacking a gun turret.

It's expected that we'll see reveals of these figures and more at this year's Toy Fair in New York City, the second week of February. Seibertron staffers, including Seibertron himself, will be on site to bring us news on the fly as the event unfolds, so remember...

Keep your optics tuned to Seibertron.com for the latest in news amd updates, plus the best galleries around! 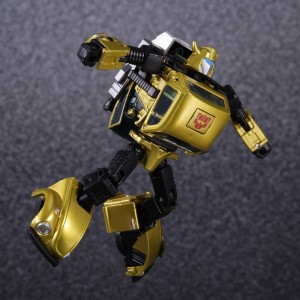 Thanks to fellow fan, Shajaki, we were directed to Amazon's listing for the upcoming Masterpiece MP-21G Bumble G2Ver. Back in the early 90's, Hasbro released Generation 2, which was a mix of repainted G1 molds, new and original molds, as well as a semi-cgi rehash of the original G1 series. Of those repainted G1 molds, Minicar Bumblebee was among the first to see release and he came along sporting a vacuum metalized (aka chrome) deco that made him all shiny, which you can see here.

TakaraTomy is homaging that G2 release with a metallic paint deco release of the MP-21 Bumblebee mold, with new accessories including a jetpack!

You can see the order page here and we've mirrored the images below: Platinum Edition Reissue of G1 Insecticons At US Retail, At K-Mart 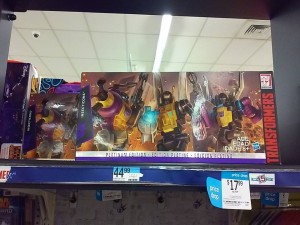 Platinum Reissue Insecticons have been sighted at US retail, and at... K-Mart?! Yes, K-Mart!

Normally Toys R Us would have this one in the bag, since reissues have been their forte for quite some time, but in an amazing first, K-Mart is the newest retailer to be carrying the reissues of the Insecticons. Boasting all new packaging that's keeping in style with the Combiner Wars line, featuring gorgeous new artwork and collectible Energon cubes to sweeten the deal!

They were found by fellow fan and collector, Rob Ware, and since the Facebook group Plastic Crack Fiends is closed to the public, we've mirrored his sighting, below:

Here are the full images of his find:

Remember, if you have a sighting to share with us, send it to sightings@seibertron.com and remember to share your finds in the sightings forum, which you can find here.

Before you go hunting them down, check out our high res galleries of the Insecticons, to tide you over until they're in hand. 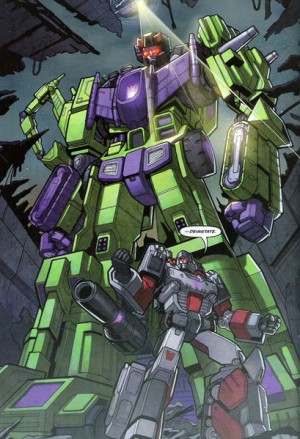 Seibertron.com staff member william-james88 was able to corroborate rumours found elsewhere about an upcoming Generations Devastator - directly from the Toys'R'Us Canada computer systems! The images below show us not only that the figure is a reality, it may very well be one that will appear at retail soon (invoice dates show late December/January, but no purchases yet), and will be priced at 179.99 CAD$. Could this also be one of the big reveals at the upcoming Toy Fairs?

What is yet uncertain is what figures will combine into the big green Gestalt, how compatible they will be with current Generations Combiner Wars figures, whether IDW's Prowlestator is a possibility,and if the rumoured Titan class is actually true. Check out the images below, and discuss these new developments in the Energon Pub! 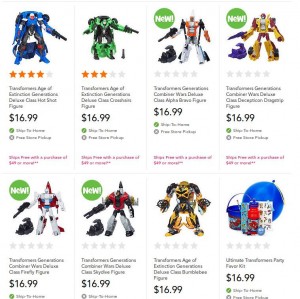 After arriving in stock on Amazon.com, it appears that the Transformers Generations Combiner Wars Deluxes - affectionately known as The Limbs - have also shown up on Toys'R'Us.com, and are available for home delivery with a handy free shipping over $49.99! Go get yourselves some Aerialbots and a Stunticon.