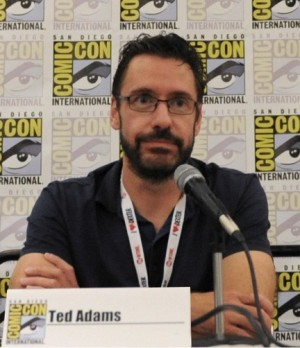 Heidi MacDonald, over at comics news website The Beat, sat down for a chat with co-founder and CEO of IDW Publishing Ted Adams. While they don't touch upon Transformers as much, they do mention it, one of their bigger licensed franchises - and there may be more to come in the second part of the interview tomorrow! Check out the robotic mentions below, and read the whole thing here.

THE BEAT: Since we’re doing a 15-anniversary look back, I wanted to ask you if you if you could lay out kind of the structure of IDW. I know that you started it with some partners and then IDT came in as investor — can you just talk about who’s still involved and
what their roles are?

ADAMS: Yeah absolutely. I started IDW with three other guys in 1999 and when we organized the business we each owned essentially 25% of the business. So there were four of us who owned 25% and that continued on for quite some time. In the early days of the business actually we weren’t a comic book publisher, we were just a creative service company that was doing art and design for a variety of entertainment companies. And so for the first probably 3 or 4 years of IDW it was just the four of us and a handful of employees. We really started with an art book by Ash Wood and that led us to doing 30 Days of Night and CSI comic books. That was around 2001-02 was when we were first starting to publish comic books. But it wasn’t really until probably 2004, 2005 when our publishing business started taking off, around the time we picked up the Transformers license, and really started to expand our publishing business. (Editor-in-chief) Chris Ryall came in and really helped us build that business.

If you look at the licensed books that we did when we first got into the game versus the licensed books that we do today, they just weren’t as good. And there’s that stigma that’s associated with a licensed book that I’ve never really understood. I think it’s starting to go away. Our Teenage Mutant Ninja Turtles book is regularly on weekly Best Of lists. It was on a bunch of end of the year Best Of lists. The Godzilla book that we did with James Stokoe was critically acclaimed; the Transformers book that James Roberts writes for us is well received not just by people who like Transformers, but people who like well written comic books.