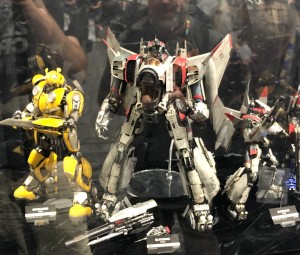 Just in from our brave commandos currently holding up a foxhole on the showroom floor of #SDCC2019 are some absolutely exquisite reveals from 3A and utterly intriguing new concepts from Mondo! Both brands are doing the Transformers franchise proud this year with 3A showing off the hyper detailed Bumblebee movie Blitzwing in two different scales along with Earth mode Bumblebee in two different scales and the amazing new Bumblebee-verse Optimus Prime in the smaller scale only. 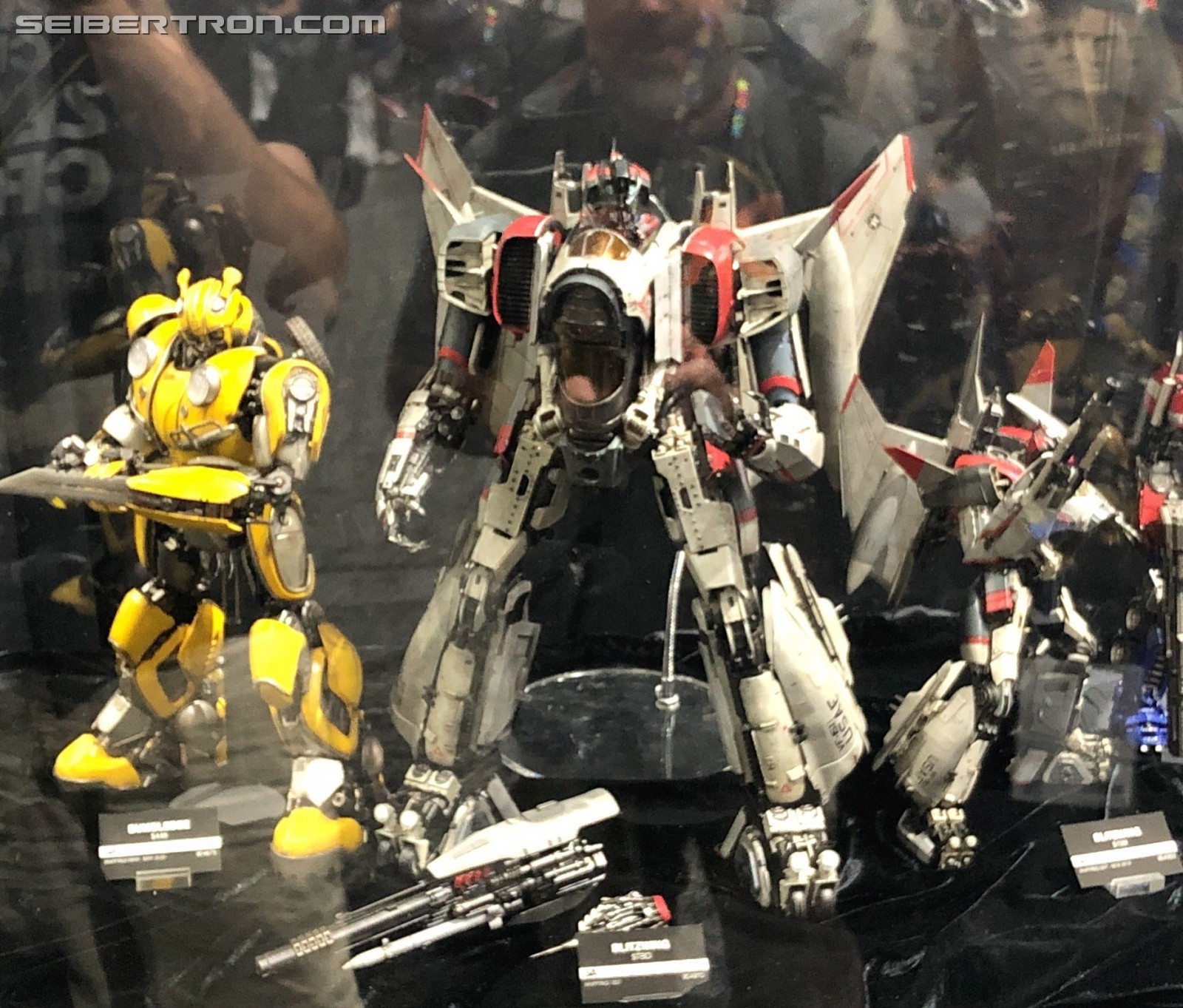 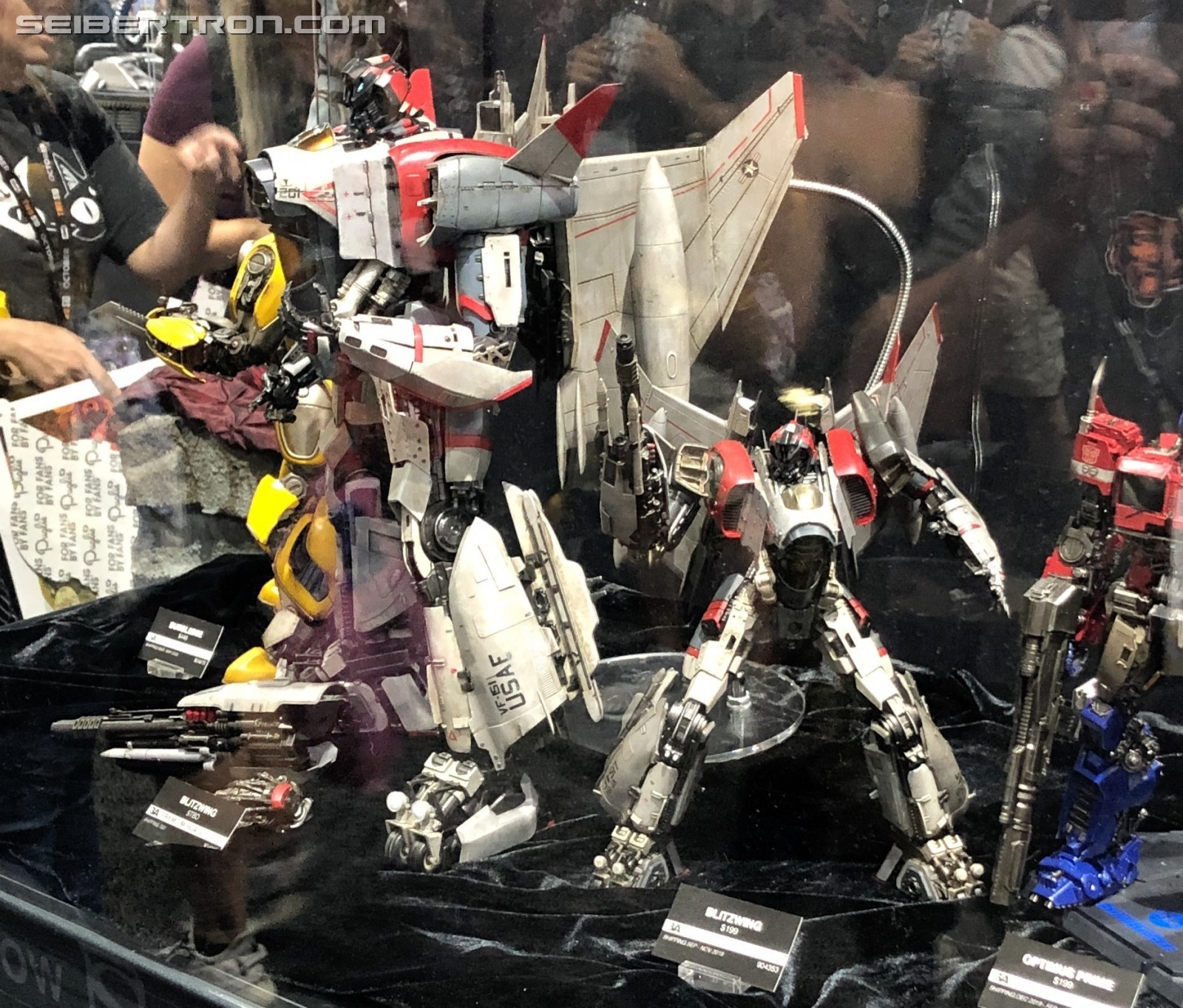 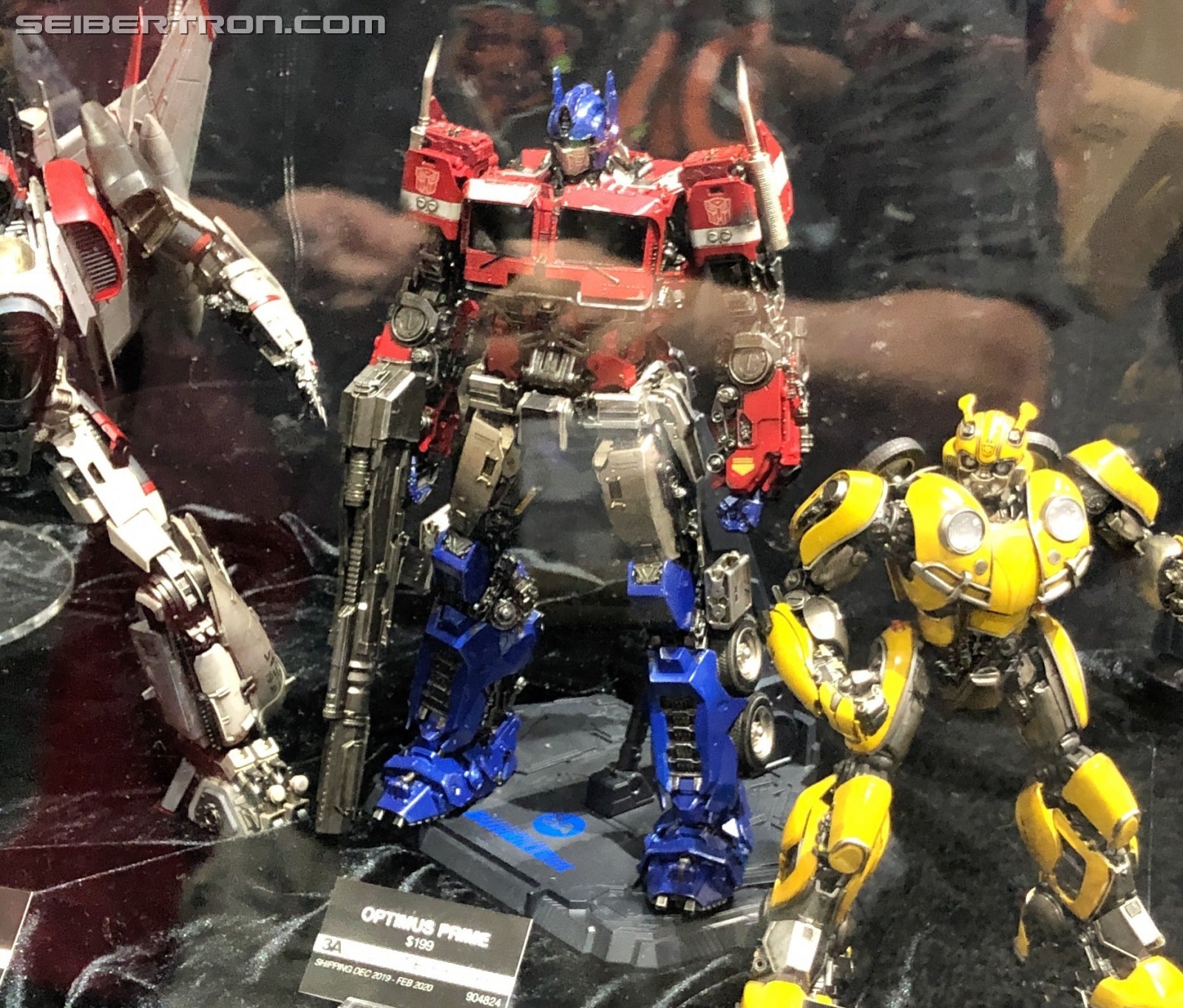 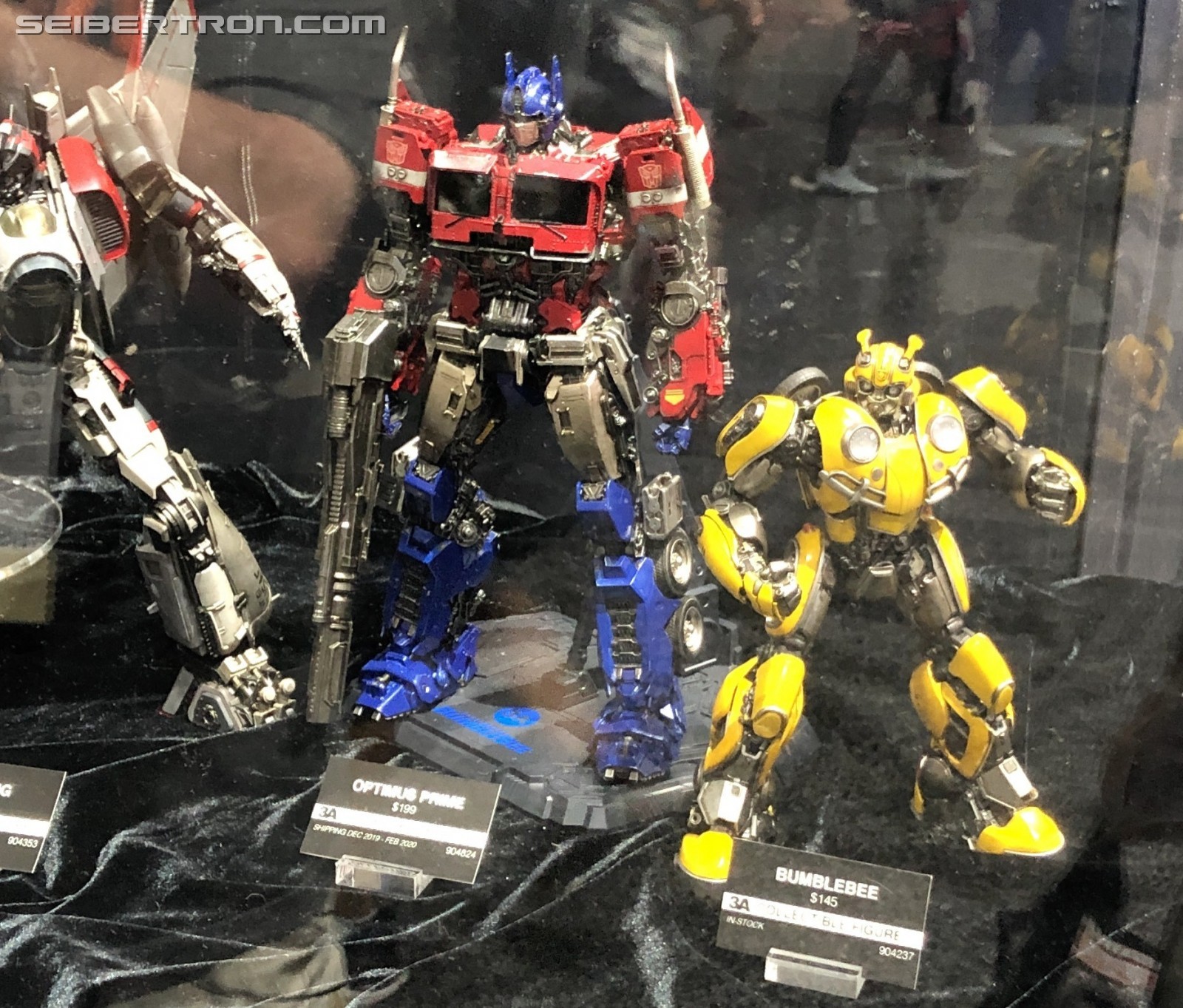 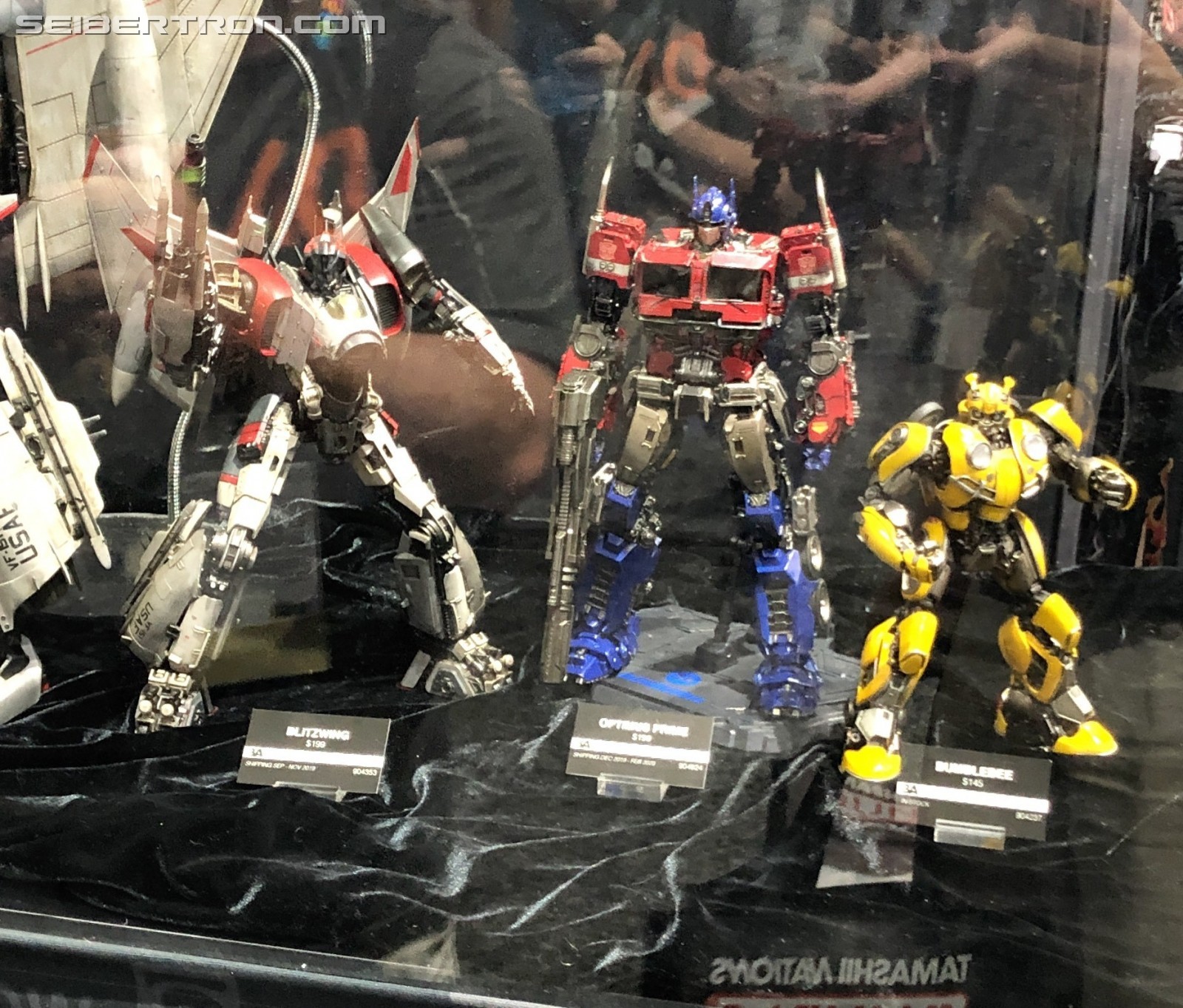 Mondo is showcasing their new Mondo Mecha figures modeled in the form of a Mecha Batman and Mecha Captain America respectively and are everything a robot loving comic book fan could hope for. These slick designs are like a fusion of classic McFarlane toys aesthetics with current Flame toys attitude. Release dates and prices are listed as yet to be determined. Mondo is also showing off their current sets of Marvel and Transformers pins shown below. 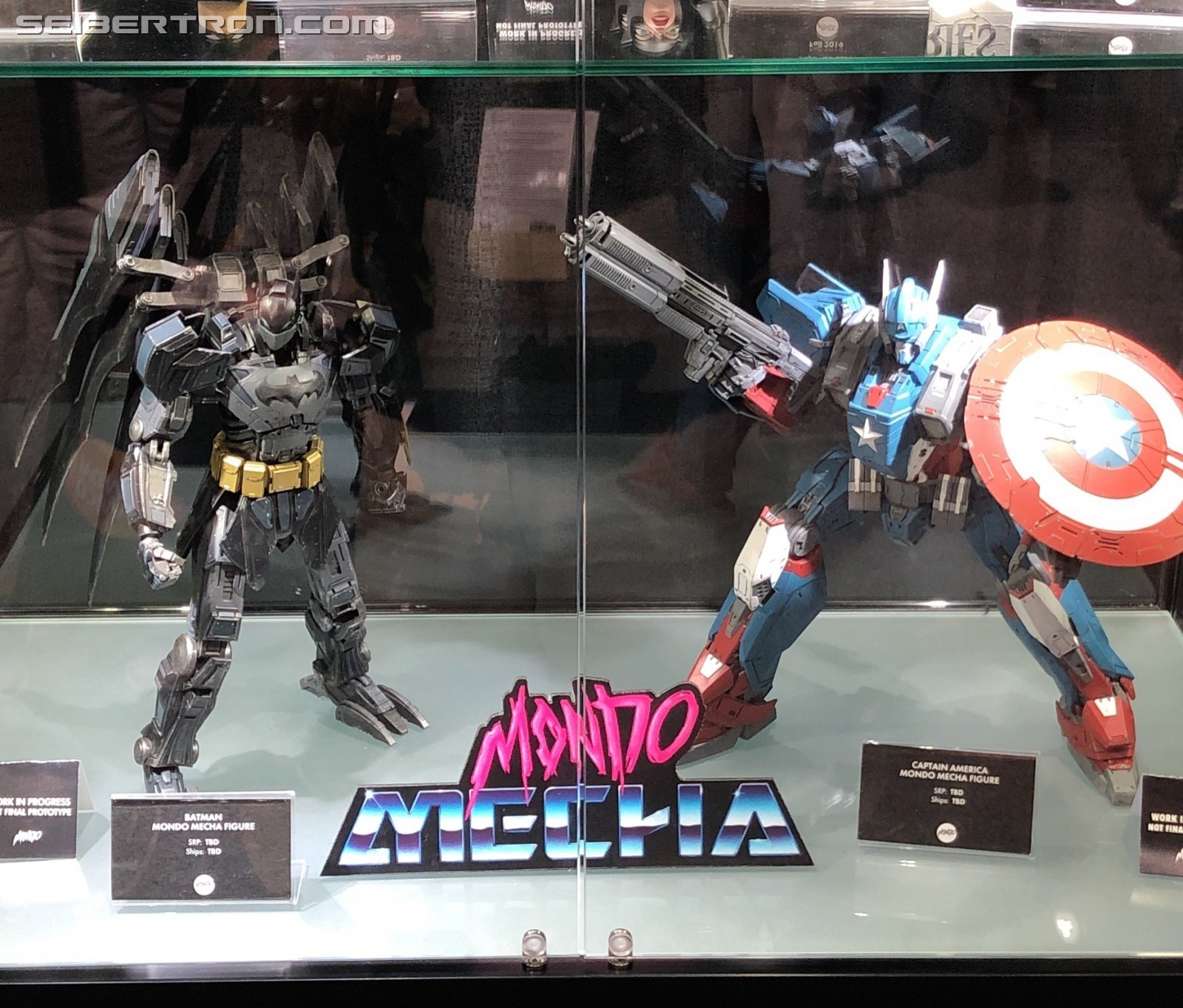 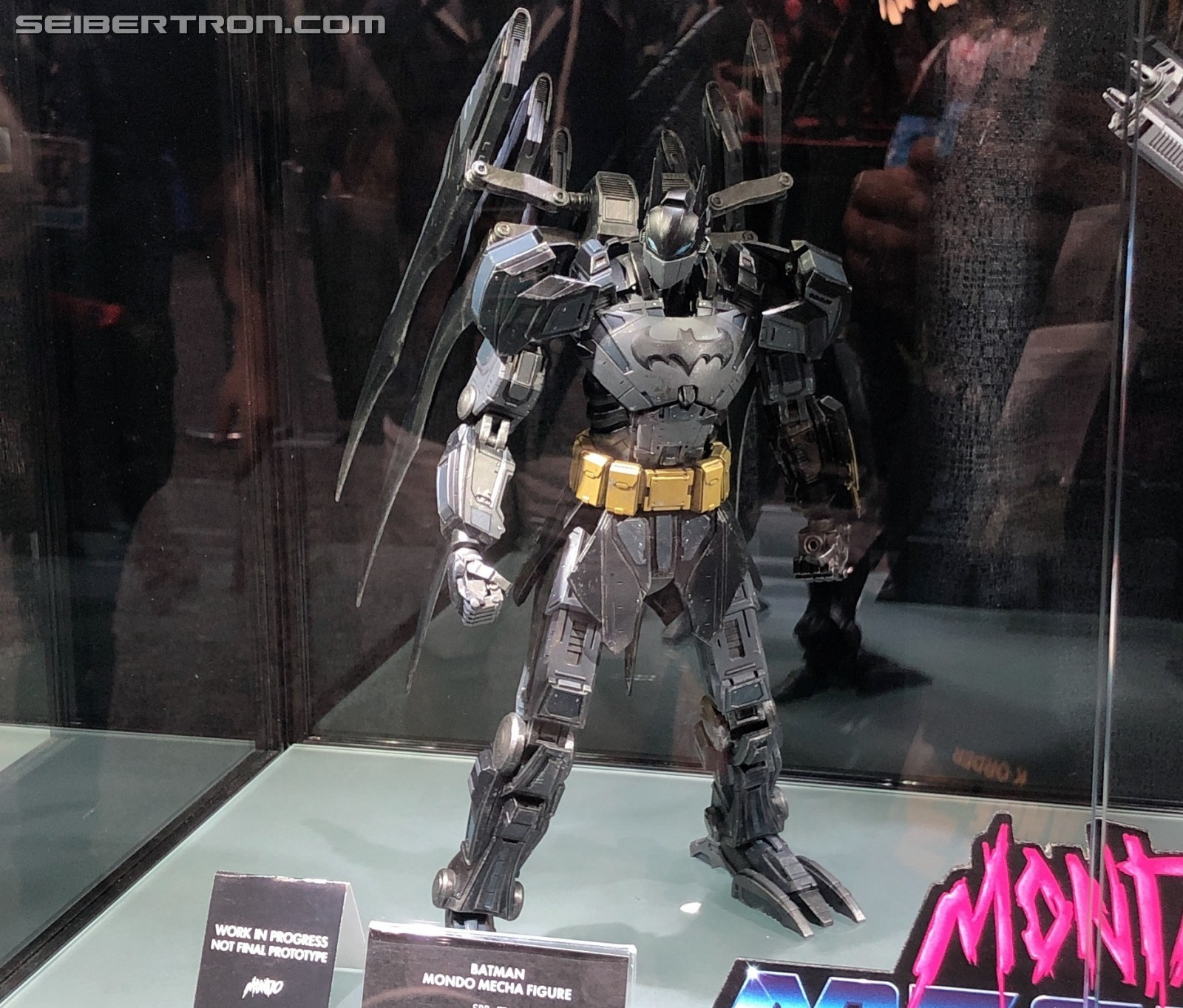 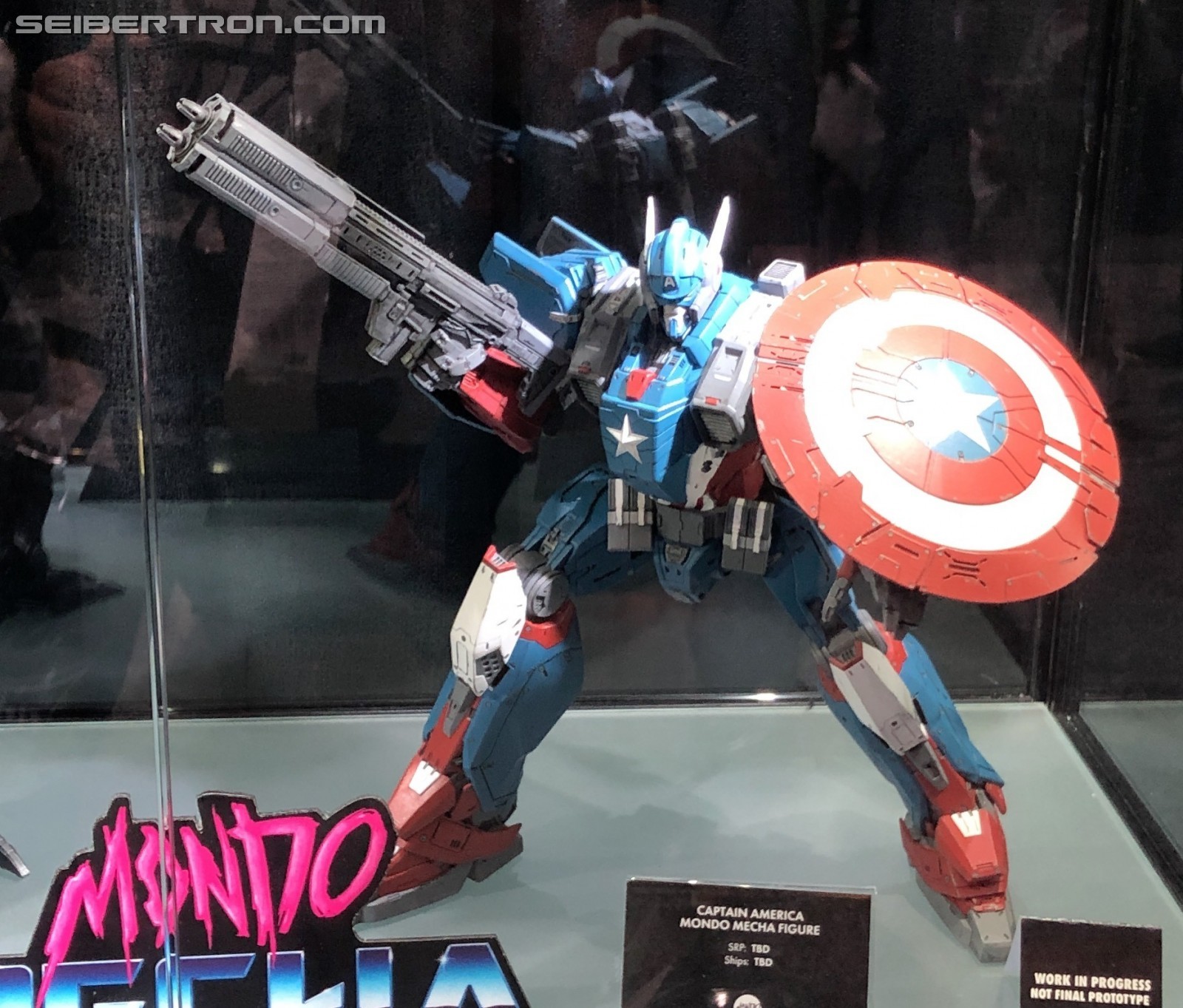 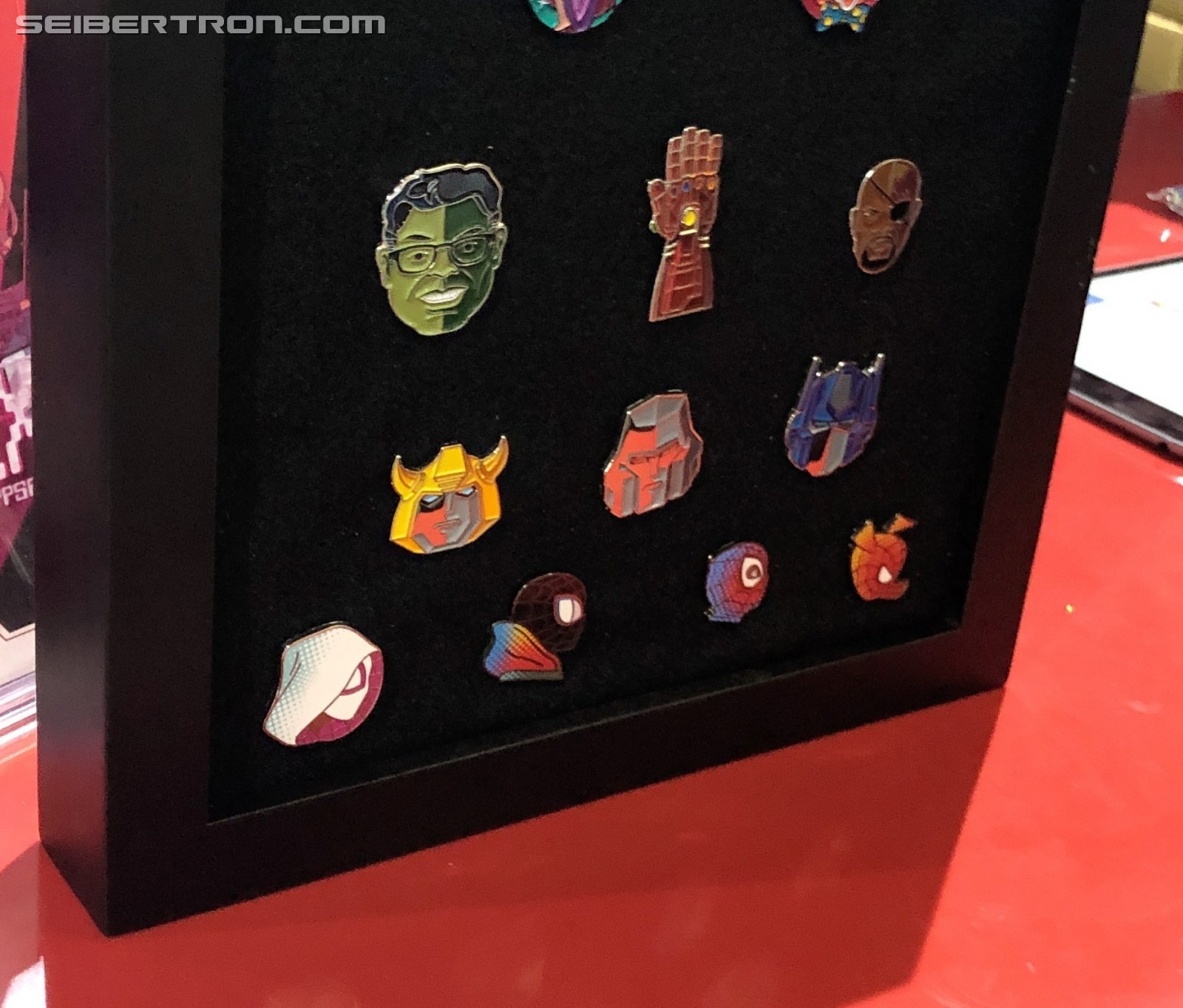 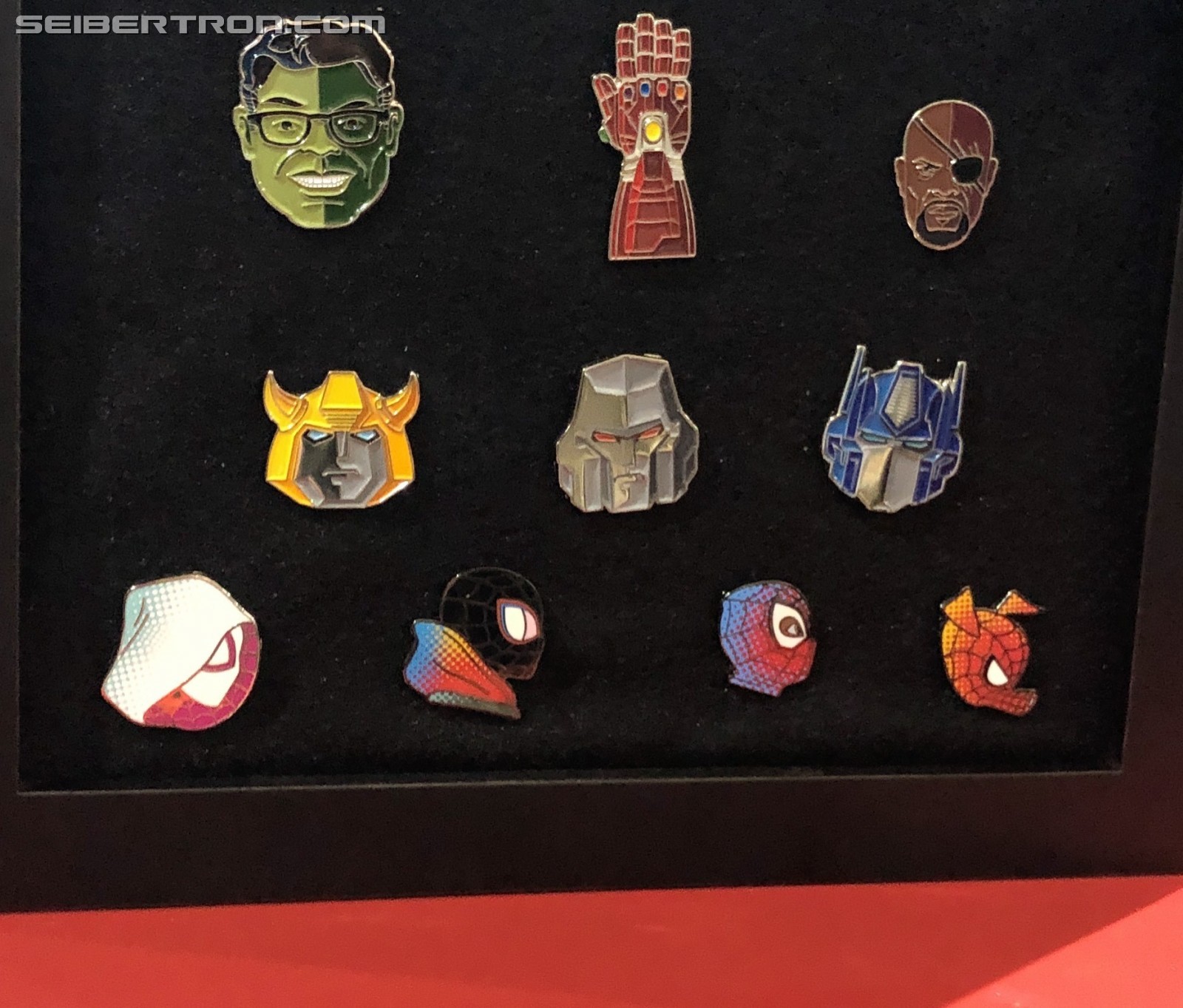 Enjoy the views and stay tuned to Seibertron for more reveals yet to come over the #SDCC2019!

Re: 3A Bumblebee Blitzwing Mondo Mecha Figures Batman and Captain America and More at #SDCC2019 (2030131)
Posted by notirishman on July 18th, 2019 @ 6:05pm CDT
During last night's Preview Night for San Diego Comic-Con 2019, we had our first look at the 3A Nemesis Prime figure for the Bumblebee film. Now, you can pre-order the figure at Hasbro Pulse! The figure is being sold for $199.99 USD, and is meant to ship approximately on March 23rd, 2020. The listing has a detail product description, which can be read below, as well as stock photos, which you can check out by clicking the screenshot below. After seeing them, tell us your thoughts, and if you're going to cave in, in the Pub forums below!

No. This is not the heroic Autobot leader, Optimus Prime. He just has one of those faces.

DLX Nemesis Prime figure does not convert, BUT it does stand at 11.2 inches tall and feature incredible sculpted detailing, 53 points of articulation, LED illuminated eyes, and die-cast metal parts. The DLX line focuses on precise design work at a smaller scale with high articulation and high detail. Each DLX figure utilizes a unique metal-frame which not only enhances the range of articulation, it greatly increases its weight and durability to provide an incredible in-hand feel. Together with Threezero’s detailed paint applications, attention to detail, and high-quality production each DLX figure is a work of art.

NOTE: Figure does not convert.

Re: 3A Bumblebee Blitzwing Mondo Mecha Figures Batman and Captain America and More at #SDCC2019 (2030251)
Posted by Nathaniel Prime on July 18th, 2019 @ 10:12pm CDT
Kinda weird how nobody has talked about this awesome thing because they all scrambled to Siege (I'll admit, I'm one of them)

Looks really badass, and I kinda want a Selects BB Voyager Optimus Prime as well.
Re: 3A Bumblebee Blitzwing Mondo Mecha Figures Batman and Captain America and More at #SDCC2019 (2042327)
Posted by Stargrave on October 19th, 2019 @ 1:22am CDT
Thanks to PrimeVsPrime on YouTube we have a review of the new ThreeZero/Three A deluxe Bumblebee movie Optimus Prime fully poseable non-transforming action figure. This thing is truly a work of toy art and appears to capture every subtle detail and nuance to what many have considered one of, if not thee best movie Optimus Prime designs seen so far. Whether you're a huge fan of the design or not, whether you're going to be buying this piece or not, PrimeVsPrime gives an excellent run down of the articulation, the stand, the blaster, every bit and piece you like to see in a review of one of these higher end items. Enjoy the view and share your thoughts in the forum. As always stay tuned to Seibertron for the ultimate in Transformers news!

https://www.indemandtoys.co.uk/product/ ... ge-figure/
Re: 3A Bumblebee Blitzwing Mondo Mecha Figures Batman and Captain America and More at #SDCC2019 (2065646)
Posted by D-Maximal_Primal on May 28th, 2020 @ 2:17pm CDT
Thanks to the ThreeZero Twitter page, we have a tease for their next upcoming premium collectors figure: Bumblebee movie Optimus Prime!

The Bumblebee movie Optimus Prime design has caused quite a stir since it debuted in the Bumblebee film back in 2018, and we have had the pleasure of getting both a transforming Studio Series toy and a prior Deluxe ThreeZero figure of this design. This new take by ThreeZero is a larger and even more premium version of their original deluxe Optimus Prime, featuring a diecast metal frame, over 140 points of articulation, and it stands an impressive 19 inches tall (so on par with Combiner Wars Devastator in terms of height, and certainly it will be heavier).

While we only have the 1 teaser picture provided by ThreeZero, we will certainly see more images and get more information soon.

Check out the teaser below, and let us know what you think in the comments section below! 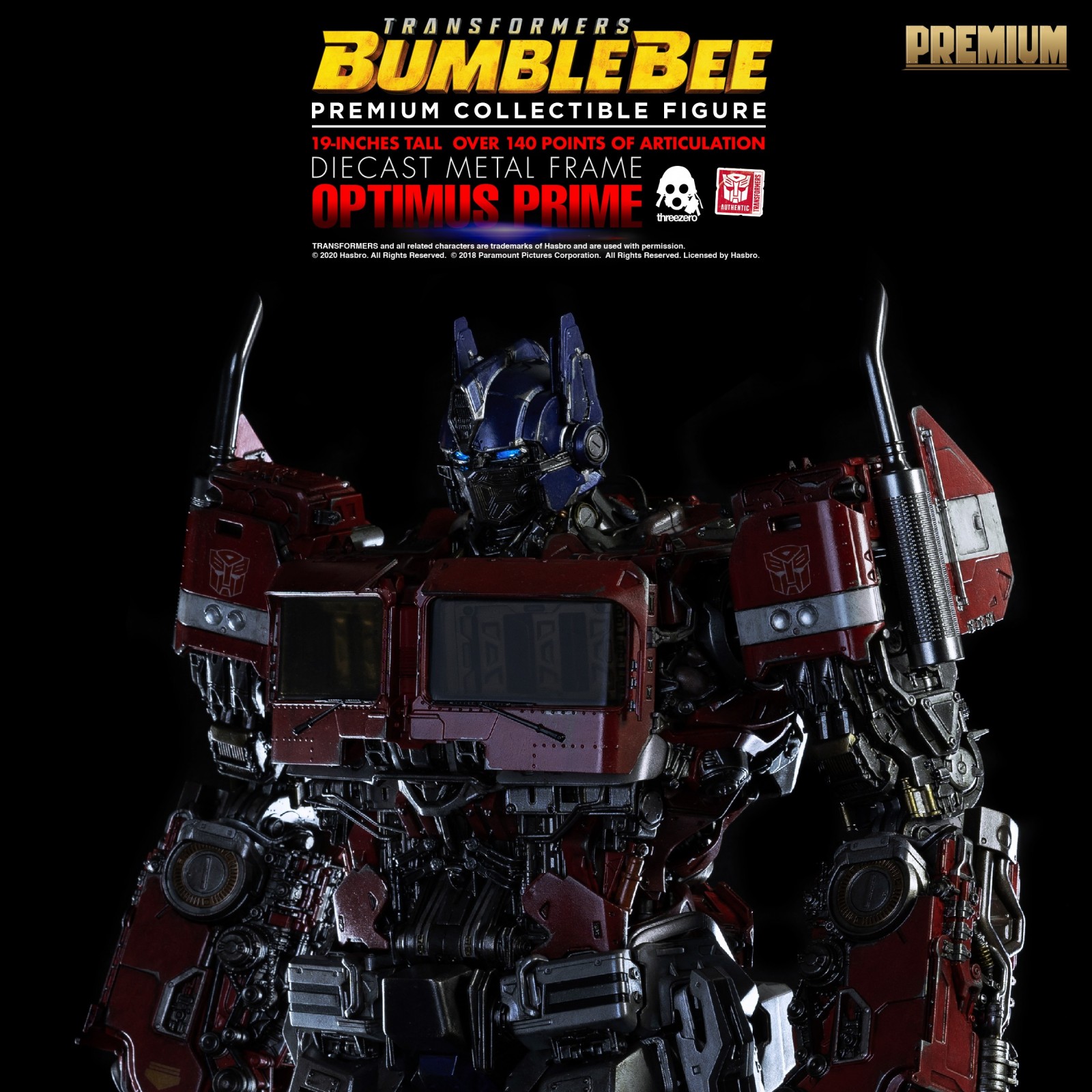