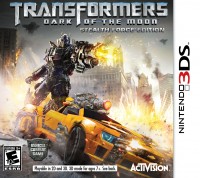 I will freely admit my trepidation of this game before I even played it. Nintendo tends to get the short end of the stick when it comes to Transformers games. Despite an awesome cast of exclusive characters the DS version of War For Cybertron was a pale shadow of the other versions and the Wii incarnation was a joke. My fears were not allayed at all by the cover which mentions that this is a "Vehicle Combat Game". True to form outside of cutscenes the game features about as many robots as Lord Of The Rings. This is even rubbed in by their turning into robot mode on the mission complete screen.

The game mechanics are as simple as they are obnoxious. In regular car mode you can do little more than drive around and destroy very small obstacles. In SF mode you can shoot a machine gun and launch rockets (of which you have a limited supply) but being in SF mode causes your "Stealth energy" to decrease. When it fully decreases you'll revert to regular car mode. Since you'll be looking at both the main screen and the radar it's difficult to keep an eye on this gauge so expect to not notice you've reverted until your weapons stop working.

As you may have guessed from the above description the general gaming style involves nothing more than shooting enemies, running away and collecting ammo and energy. It's the same style that I resort to in other, better games if bosses are too broken to beat by regular tactics. In fact it reminded me of fighting the unlockable bosses in the DS version of WFC.

The game makes no attempt from the outset to hide its lack of inspiration. As soon as the training session finishes your first task is...kill 6/6 enemies. The very next thing after that is killing...x/x enemies. The next thing after that is driving through checkpoints while killing/avoiding enemies. It's like an MMORPG, without the multiplayer aspects or capicity for levelling up.

And unfortunately the game continues in this vein. You'll continue to try and complete unsatisfying objectives while regenerating enemies shoot at you endlessly. There are at least 8 playable characters but despite the manual's claims to the contrary playing as the slow heavy Optimus is a near indistinguishable gaming experience from being the fast, nippy Bumblebee.

The game is not without pluses. There is an instant 180-degree turn button which can be a rare luxury in this type of game. As your health lowers red Cybertronian glyphs start appearing on the screen as if you are a Transformer about to go into stasis lock. While some of the textures are weak the vehicles are smooth and their mode-shifting is detailed. However that's about it in terms of pluses.

Ultimately this is a game that I can't recommend to anyone. It's too frustrating for younger fans, too repetitive and unfulfilling for older fans and too robot-free for any Transformers fan. Buy yourself a couple of Voyager figures instead.

Posted 2 days ago
News Categories: Toy News, Movie Related News, Comic Book News, Cartoon News, Site News, Rumors, Event News, Digital Media News, Collectables, Game News, Sponsor News, Site Articles, Store News, Company News, People News, Press Releases, Sightings, Reviews, Unlicensed Products News, Auctions, Transtopia, Interviews, Knock Offs, Collector's Club News, Editorials, Heavy Metal War, Podcast, Contests, Book News, Top Lists
Click here to post your comment about this news story!
Re: 3DS Dark Of The Moon Game Reviewed (1253422)
Posted by Treetop Maximus on July 5th, 2011 @ 11:46pm CDT
What concerns me here is the price. Damn! Portable gaming is becoming as expensive as console gaming and that really bugs me. All because of technology and those graphics whores who need everything to look better.
Re: 3DS Dark Of The Moon Game Reviewed (1253423)
Posted by Megazarak on July 5th, 2011 @ 11:47pm CDT
It sucks that the 3DS got some low quality TF game this time around. I mean come on, Transformers game where you can't transform. Hopefully when WfC2 rolls around the 3DS version (assuming one will be made, though it's hard to imagine that Activision will not try to capitalize on TF games on all systems) is actually a fun and complete TF game.
Re: 3DS Dark Of The Moon Game Reviewed (1253441)
Posted by Megatron Wolf on July 6th, 2011 @ 12:08am CDT

Diem wrote:Nintendo tends to get the short end of the stick when it comes to Transformers games.

actually the PSP gets the short end of the stick when it comes to TF games, both movie games sucked hard & there were no WFC games. The first movie games on the DS were awesome, ROTF sucked and WFC was good but to damn hard, that seems to be a pretty descent track record if you ask me.
Re: 3DS Dark Of The Moon Game Reviewed (1253567)
Posted by dragons on July 6th, 2011 @ 8:02am CDT

What concerns me here is the price. Damn! Portable gaming is becoming as expensive as console gaming and that really bugs me. All because of technology and those graphics whores who need everything to look better.