5 Page Preview of Transformers: Tales of the Fallen #5 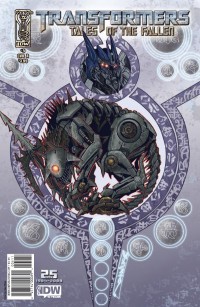 Thanks to BZZURKK.com, we get a five page preview of IDW Publishings next installment to the post Revenge of the Fallen story arc, Tales of the Fallen issue # 5. In this issue, a certain stealth Decepticon is resurrected. Here's the issue synopsis:

Written by Simon Furman, with art by Alex Milne and Carlos Magno.


It begins here-the momentous event that is Transformers: Nefarious kicks off with the sudden, shocking-and silent-reappearance of stealth agent RAVAGE. Thought destroyed in Revenge of the Fallen, Ravage is back. But who is pulling his strings, and what is his mysterious but crucial mission? 2 regular covers will be shipped in a 1-to-1 ratio. Check out the full five page preview by clicking here.

Don't get me wrong: the art was adorable. Scampering robokitty was just...facemelty at times.

But...story? Conflict? Now, if _Tales of the Fallen_ were a series--like each issue was an episode that added to a plot, I'd perhaps be intrigued as to who his new master is, but thus far, they've seemed to stand as oneshots. So... huh?

Anyone else beginning to think maybe Furman just...isn't even TRYING anymore?

HK, sigh.
Re: 5 Page Preview of Transformers: Tales of the Fallen #5 (1035501)
Posted by Moon Bug on January 10th, 2010 @ 3:00pm CST
I totally believe that as long as the memory remains intact every other part of the transformer can be destroyed and they still can be brought back to life. But there just didn't seem anything left of Ravage. And if he was brought back from nothing, would they really bring him back exactly the same, because it looks that way.

I just didn't see the point of this story, was it even going anywhere? It seemed a little on the lame side in my opinion, it just doesn't pick my interest into wanting to read more.