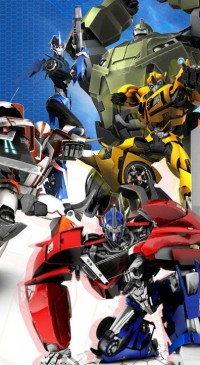 Transformers: The Fall of Cybetron isn't the only video game Transformers fans can look forward to in the Fall of 2012. Activision will also be releasing Transformers Prime: The Game for the various Nintendo platforms. See the teaser trailer and press release below.

SANTA MONICA, Calif., March 15, 2012 /PRNewswire/ -- Activision Publishing, Inc., a wholly owned subsidiary of Activision Blizzard, Inc. ATVI, is bringing the ultimate TRANSFORMERS video game experience to kids of all ages with the TRANSFORMERS PRIME video game. Based on the hit animated television show produced by Hasbro Studios and currently airing on The Hub television network in the U.S., the game lets fans play as their favorite AUTOBOT characters and embark on an action-packed adventure to save the earth from the evil MEGATRON and his new secret weapon. Players step into the roles of OPTIMUS PRIME, BUMBLEBEE, ARCEE, AUTOBOT RATCHET, BULKHEAD and more as they explore unique vistas all around the world with brawler-style combat and diverse driving sequences. Along the way, gamers cultivate friendships with Jack, Miko and Raf – the human characters from the show – as Team Prime sets out to protect mankind and eliminate the DECEPTICONS once and for all.

"Hasbro Studios has done a phenomenal job with the TRANSFORMERS PRIME television show," said David Oxford, Executive Vice President at Activision Publishing. "We are collaborating closely with the series creators to capture all the adventure, humor and friendships from the show to create an authentic action experience for TRANSFORMERS fans of all ages to enjoy."

"Hasbro is thrilled to be working with Activision again on an exciting new TRANSFORMERS video game," said Mark Blecher, Senior Vice President of Digital Media and Marketing at Hasbro. "The TRANSFORMERS PRIME animated series has resonated strongly with kids and fans and we're looking forward to delivering this new way to experience the adventure."

For more information and exclusive updates, fans can visit http://www.TransformersPrimeTheGame.com.

Hasbro, Inc. HAS is a branded play company providing children and families around the world with a wide-range of immersive entertainment offerings based on the Company's world class brand portfolio. From toys and games, to television programming, motion pictures, video games and a comprehensive licensing program, Hasbro strives to delight its customers through the strategic leveraging of well-known and beloved brands such as TRANSFORMERS, LITTLEST PET SHOP, NERF, PLAYSKOOL, MY LITTLE PONY, G.I. JOE, MAGIC: THE GATHERING and MONOPOLY. The Hub, Hasbro's multi-platform joint venture with Discovery Communications (NASDAQ: DISCA, DISCB, DISCK) launched on October 10, 2010. The online home of The Hub is http://www.hubworld.com. The Hub logo and name are trademarks of Hub Television Networks, LLC. All rights reserved.

Come see how we inspire play through our brands at http://www.hasbro.com. © 2012 Hasbro, Inc. All Rights Reserved.

Re: ACTIVISION AND HASBRO TEAM UP TO CREATE TRANSFORMERS PRIME VIDEO GAME BASED ON THE HIT TELEVISION Series (1358684)
Posted by Sodan-1 on March 15th, 2012 @ 1:02pm CDT
I feel for any Transformers fans that only have Nintendo machines that will have to make do with this sub-par game from Z-league studios.


Sounds like the Transformers Animated game for ds, and yet another Nintendo Transformers game that seems like you can't transform at will. And the "trailer" reminded me of the flash-animated videos they used for DOTM stealth Force (yes, I played it for three levels, and yes, I cried). I know activision can make a good game under the right conditions, however, anything on a nintendo platform is the wrong conditions when it comes to Transformers (well I'll give Cybertron Stories a pass). Dig up the old atari team that made the PS2 Armada game and let them tackle the nintendo side of things cause that game was awesome. And if it's nintendo's fault somehow (you know by restricting the content and such) then just change the name to just change the name to "Kids who own Intergalactic Robots and talking Cars with Guns".

That makes NO sense. However, a suggestion - wii arcade my friend, N64 out the ass in there. I have the original N64 though, so no wii for me. There are also alot of the best SNES games to buy there as well. That's what the wii's good for imo. Oh, and Zelda. and Smash Bros. and gamecube games.

That makes NO sense.

Sabrblade wrote:What's with the Movie 1 Megatron wireframe at 0:29 in the video?

Sabrblade wrote:What's with the Movie 1 Megatron wireframe at 0:29 in the video?

That's not weird, it's just damn cheap production value of this stupid trailer.
Re: ACTIVISION AND HASBRO TEAM UP TO CREATE TRANSFORMERS PRIME VIDEO GAME BASED ON THE HIT TELEVISION Series (1358793)
Posted by Powermaster Jazz on March 15th, 2012 @ 8:01pm CDT

That makes NO sense.

It does make sense. I have a Wii. But i don't want to waste any more money on it than I already have.

I makes perfect sense. Mine is broken and i refuse to pay to get it fixed. I just chucked it in the trash. Wii is dead. Not even Zelda could save it in my eyes.
Click here to view additional comments about this topic at the Energon Pub Forums ...