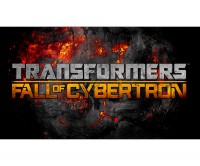 
Santa Monica, CA - October 6, 2011 - Gamers will finally experience the epic battles that shaped the history of the AUTOBOTS and DECEPTICONS with the fall 2012 release of Activision Publishing, Inc.'s (Nasdaq: ATVI) TRANSFORMERS: FALL OF CYBERTRON for the Xbox 360® and PlayStation®3 computer entertainment system. Currently in development by the acclaimed team at High Moon Studios, TRANSFORMERS: FALL OF CYBERTRON takes fans through the final, darkest hours of the civil war between the AUTOBOTS and DECEPTICONS as they fight for control of their dying planet, ultimately leading to their storied exodus from home.

More information about the upcoming game can be found in the November 2011 cover story of Game Informer magazine on sale beginning October 14, which will feature never before seen artwork and dual, limited edition covers. Eager fans can visit http://www.GameInformer.com for updated news, features, interviews and videos throughout the next few weeks.

"High Moon Studios is an extremely talented development team having raised the bar of gameplay and TRANSFORMERS authenticity in their games," said David Oxford, Executive Vice President at Activision Publishing. "TRANSFORMERS: FALL OF CYBERTRON is an extraordinary project both for the studio and the TRANSFORMERS gaming legacy - the stakes are higher and the scale much larger than ever before, and we absolutely cannot wait for fans to see all the new characters and epic action that awaits them."

"Hasbro has worked hand in hand with Activision to create a fully original storyline that details the climactic battles leading to the famed exodus of the TRANSFORMERS characters from CYBERTRON," said Mark Blecher, SVP of Digital Media and Marketing, Hasbro. "Our team at Hasbro is looking forward to exploring and expanding the TRANSFORMERS story again with an incredible blockbuster video game that will blow fans away next year."

For more information and exclusive updates, fans can visit http://www.facebook.com/transformersgame and follow the team via Twitter @HighMoonStudios.

About Hasbro
Hasbro, Inc. (NASDAQ: HAS) is a branded play company providing children and families around the world with a wide-range of immersive entertainment offerings based on the Company's world class brand portfolio. From toys and games, to television programming, motion pictures, video games and a comprehensive licensing program, Hasbro strives to delight its customers through the strategic leveraging of well-known and beloved brands such as TRANSFORMERS, LITTLEST PET SHOP, NERF, PLAYSKOOL, MY LITTLE PONY, G.I. JOE, MAGIC: THE GATHERING and MONOPOLY. The Hub, Hasbro's multi-platform joint venture with Discovery Communications (NASDAQ: DISCA, DISCB, DISCK) launched on October 10, 2010. The online home of The Hub is http://www.hubworld.com. The Hub logo and name are trademarks of Hub Television Networks, LLC. All rights reserved.

HASBRO and its logo, TRANSFORMERS and all related characters are trademarks of Hasbro and are used with permission. © 2011 Hasbro. All Rights Reserved. Microsoft, Xbox, Xbox 360, Xbox LIVE, and the Xbox logos are trademarks of the Microsoft group of companies. "PlayStation" is a registered trademark of Sony Computer Entertainment Inc. Game © 2011 Activision Publishing, Inc. Activision is a registered trademark of Activision Publishing, Inc. All rights reserved.

Remember guys, as far as Alex Irvine, Highmoon, and the TF: Prime team are concerned, they are working on separate projects. It is Hasbro drawing the lines between the three. FoC will probably have as much relation to Exiles and TF: Prime as WfC had with Exodus and TF: Prime.

I love the first game and I can't wait for this one!
Re: Activision officially announces "Transformers: Fall Of Cybertron" Video Game for 2012 (1297138)
Posted by WarzoneBeta on October 6th, 2011 @ 1:52pm CDT
And my wallet is ready for the preorder page...
In other news....GIMMEGIMME I WANT IT I WANTS IT LIKE BANANA CREAM PIE!!!!

Can you think of a better way to waste hours of your life? There aren't many

Re: Activision officially announces "Transformers: Fall Of Cybertron" Video Game for 2012 (1297188)
Posted by Baneblade on October 6th, 2011 @ 3:12pm CDT
i was wondering if they would release a follow up.

Dr. Heavy B wrote:Metal. Mayde this might be able to fill the plot holes between WFC and Transformers Prime

Aside from the Dark Energon variations and difffering body designs, like what?
Re: Activision officially announces "Transformers: Fall Of Cybertron" Video Game for 2012 (1297207)
Posted by Avensis-Mahiya on October 6th, 2011 @ 3:25pm CDT
EPICCCC.
Click here to view additional comments about this topic at the Energon Pub Forums ...