Add TLK Hound to your Ultimate Squad in Transformers: Forged to Fight! 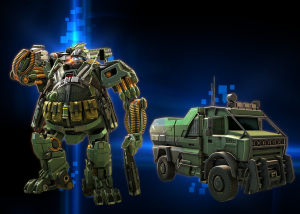 We have a new update for Kabam's Transformers: Forged to Fight mobile game, this time featuring a new and interesting character: Movie Hound! This is based on the character voiced by John Goodman that appears in both Age of Extinction and The Last Knight with his vehicle mode being based more on the later film with some changes to avoid any copyright issue with Mercedes.

This player is available as of right now and you can read all his stats below or on their website by clicking here. They also le you know who he is strong and weak against. It seems he is no match for Optimus Primal for instance. 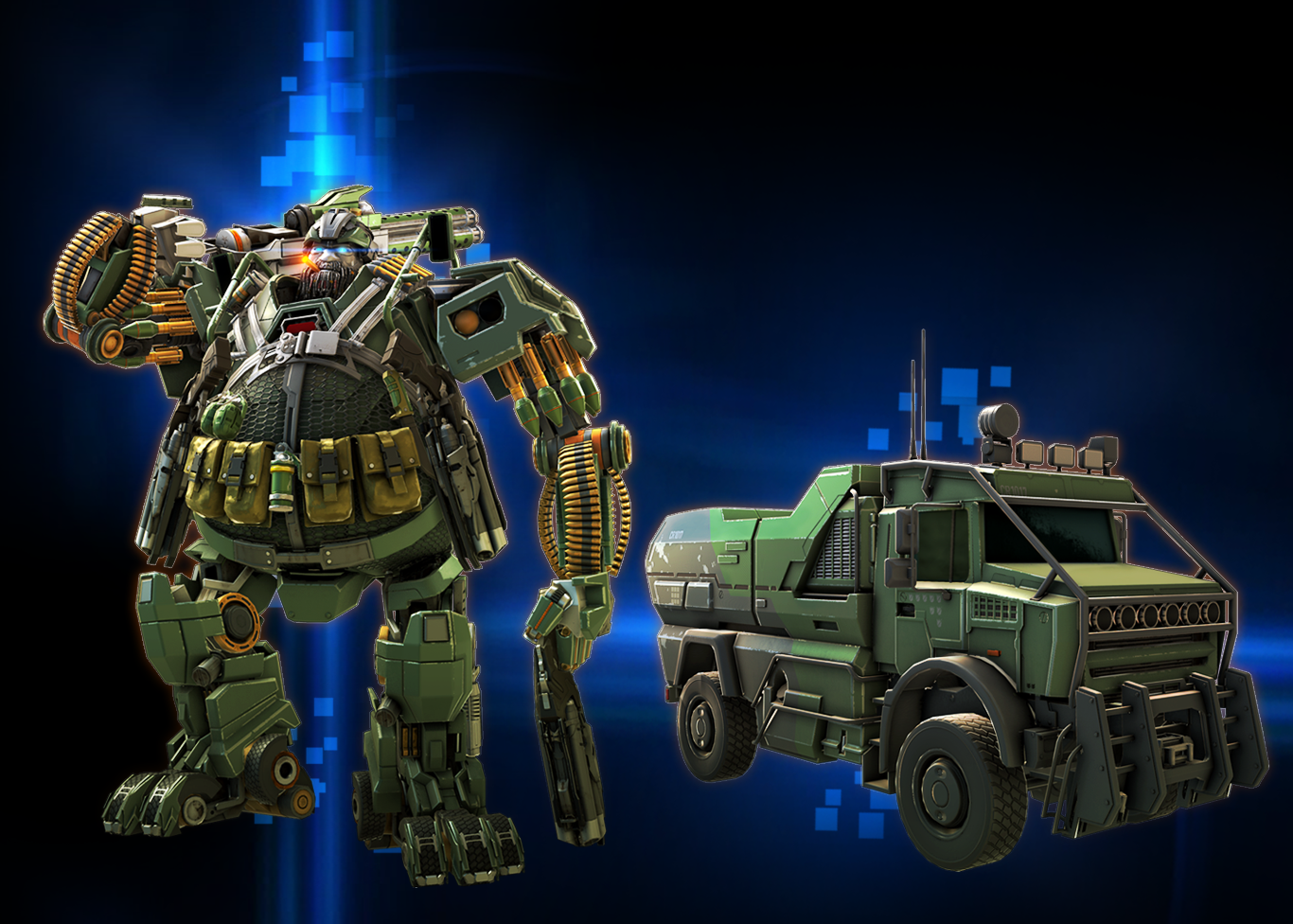 Autobot Hound has a mean bark and a nastier bite. This brave warrior will back his teammates no matter how grim the struggle. Armed with enough weaponry for a small army and quick to improvise, this Autobot is able to hold his own in any situation.

Holding Block at Ranged Distance for .9 seconds will Swap Autobot Hound’s Ammo Types.
Inferno Ammo grants Critical Ranged Hits a 100% chance to inflict Burn, dealing 40~60% of Attack as Heat damage over 8~10 seconds.
Precision Ammo grants Ranged Attacks a 30~50% increased Critical Rate and cannot be Evaded and is not affected by abilities that would cause Ranged Attacks to Miss.
Ranged Attacks:

100% Chance to gain an Armor Buff, reducing damage from attacks by 10% for 6 seconds.
50% Chance to inflict a Critical Resistance Debuff, increasing the chance for Critical Hits against opponents by 20% for 6 seconds.
SIGNATURE ABILITY – WARRIOR BALLERINA
In the heat of a firefight this robust robot uses his surprising agility to maneuver and exploit the enemy’s weak points.

Nothing makes holes quite like a naval rotary cannon.

You’re not out of time until you’re out of ammo!

100% Chance to gain an Armor Buff, reducing damage from attacks by 10% for 30 seconds.
Autobot Hound has a 100% chance to inflict a Critical Resistance Debuff, increasing the chance for Critical Hits against opponents by 40% for 28 seconds and proceeds to fire every gun in his inventory.
SYNERGY BONUSES:
Mutual – Enemies – Barricade

7% of base Health Repaired at the start of the fight. +5% extra Repair in Raids.
Incoming – Allies – Optimus Prime MV1, Drift

RECOMMENDED MODULES FOR AUTOBOT HOUND:
EMI Module – The EMI Module will punish any gunslingers who attempt to outshoot this warrior.
Laser Guidance Module – This module will combine with Autobot Hound’s Signature Ability to punch holes through even the toughest opponent.

Re: Add TLK Hound to your Ultimate Squad in Transformers: Forged to Fight! (1943183)
Posted by WreckerJack on March 1st, 2018 @ 2:21am CST
Players of Transformers: Forged to Fight will be excited to know that it has been awarded “Best Mobile Game” at the Global Mobile Awards! This was also announced on the Transformers Facebook page. Fans of the game may also remember that also it won most competitive game for 2017 on Google Play. It is credited for appealing to a wide variety of Transformers fans while being easy to use. It's clear that this game is keeping players coming back for more.

The judges said – “Appealing to fans across the generations, this is designed for ease of use on mobile devices, proven by its millions of downloads.” 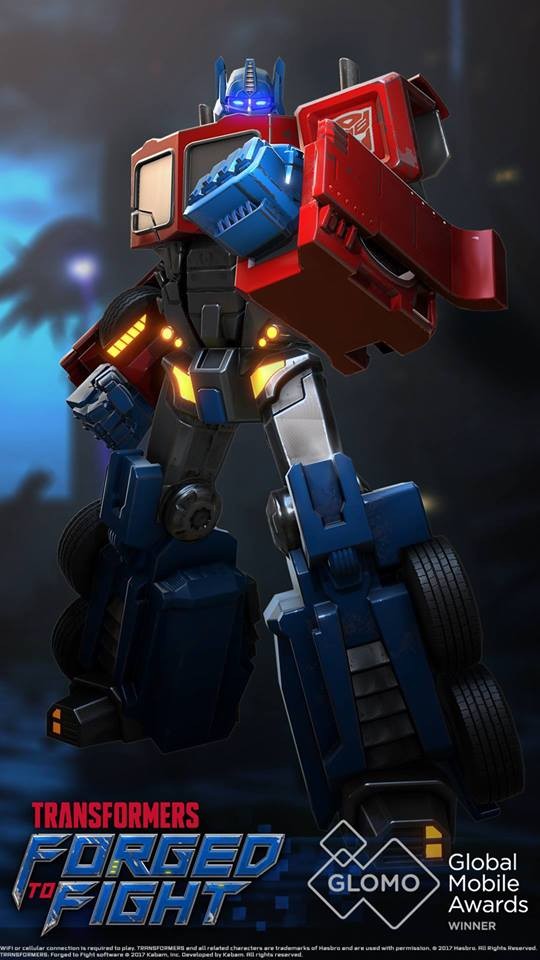 "Wow, "TFs: - Forced to Swipe" won awards that I've never heard of. This must make it really good, and enjoyed by most of the TF fandom and be a real competitor to the likes of Clash of Clans or Candy Crush in the minds of the public! Isn't it great!" 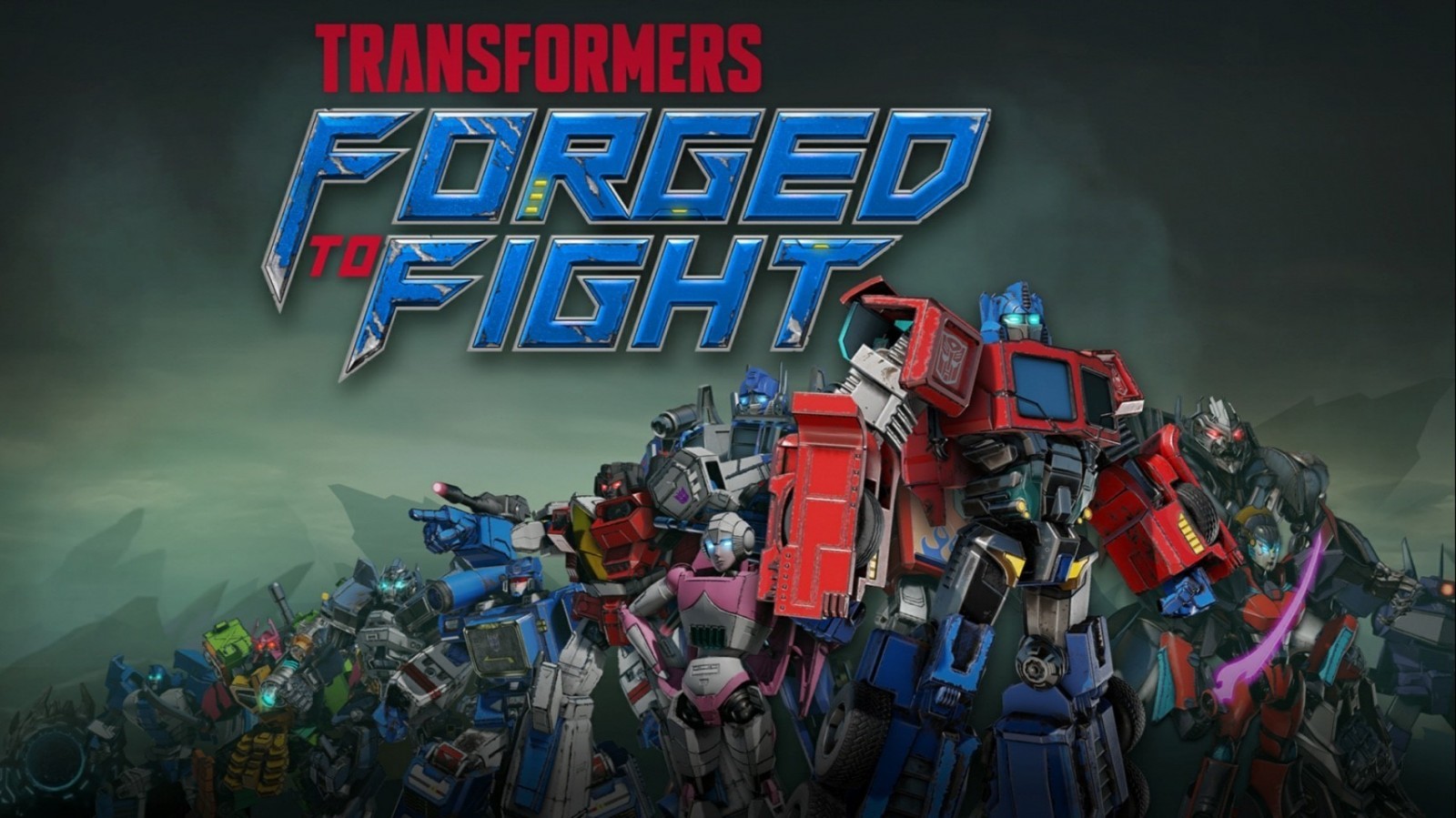 At this year’s Global Mobile Awards (GLOMO Awards) in Barcelona, Spain during Mobile World Congress 2018, representatives from the GSMA awarded Kabam, Inc. – creators of massively multi-player mobile games for a global audience – ‘Best Mobile Game’ accolade for the company’s popular mobile fighting game Transformers: Forged to Fight. Since the game’s launch in April 2017, Transformers: Forged to Fight has been incredibly successful as it was previously awarded Google Play's Most Competitive Game and has seen more than 19 million downloads to date.

Transformers: Forged to Fight was developed by Kabam, the studio who created Fast & Furious: Legacy and Marvel Contest of Champions, a top 10 grossing game on the App Store. The game is now available worldwide in more than 155 countries on the App Store for iPhone, iPad and iPod touch, and Google Play for Android devices. Visit ForgedtoFight.com for more information.

Re: Add TLK Hound to your Ultimate Squad in Transformers: Forged to Fight! (1946277)
Posted by Va'al on March 15th, 2018 @ 5:51am CDT
From the official Kabam Studios webiste for the mobile game Transformers: Forged to Fight, we have another character update in the form of the addition of Insecticon Kickback joining the game as of March 15th! The full bot intel report can be seen on the site here, but we have also copied it below for your reading convenience. 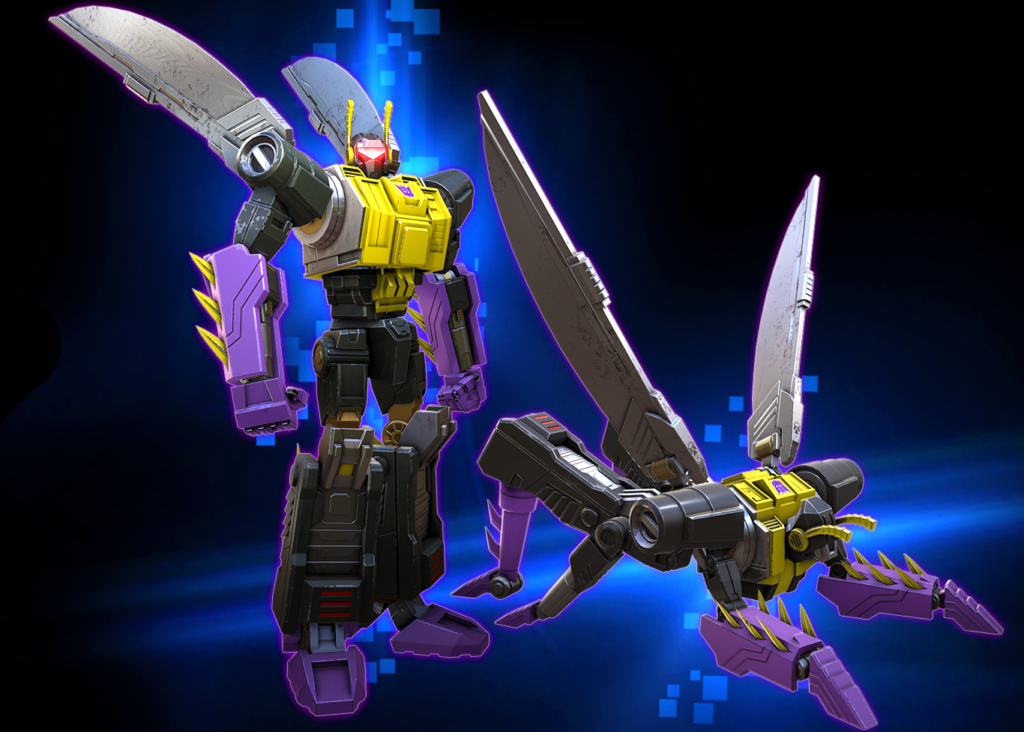 Intelligent and deceptively persuasive, Kickback’s power to manipulate minds is only ever a ploy to gain access to the information or resources he seeks. Like all Insecticons, Kickback feels the urge to continuously consume all material around him and is capable of chewing through even the toughest Cybertronian metal.
Stats and Abilities:

When Kickback transforms he has a 100% chance to Consume all Shock, Power Drain, Power Lock, and Power Rate Debuffs on himself and generate 1~5% of his Max Power over 2 seconds for each debuff removed.
When Kickback lands a Heavy Attack he has a 100% chance to Consume all Power Rate and Power Gain Buffs from the opponent and generate 1~5% of Max Power over 2 second for each buff removed.

Kickback’s attacks can be modified to infect his opponent with T-Clog. This cyber virus attacks the bot’s sensitive electronics that control their ability to Transform.

35~70% chance to infect an opponent with T-Clog, lowering the opponent’s power rate by -30% for 10 seconds. If the infected bot uses a Heavy Attack, T-Clog is removed and their Transformation fails, Stunning them for 2 seconds.

Special 1 – Shock in the Wounds

Kickback uses a shocking blast to turn insult to injury.

100% chance to Inflict Shock for each Power Leak on the opponent, dealing 40% of Attack over 5 seconds.

Those wings aren’t just for looks.

100% Chance to gain a Critical Rate Buff, increasing Critical Rating by 30% for 8 seconds.
100% chance each Critical Hit of Kickbacks Wing Blades to inflict Power Leak, draining 4.8~9.6% of an opponent’s power over 10 seconds.

100% chance each Critical Hit to inflict Power Leak, draining 4.8~9.6% of an opponent’s power over 10 seconds.
For each Power Leak on the opponent Kickback Repairs 3% of his Max Health over 5 seconds.

Shockwave – Shockwave would find this matchup to be illogical as his Shock charges will be quickly consumed by this voracious Insecticon.
Megatron (Revenge of the Fallen) – Once Megatron has been infected with T-Clog his proclivity to fire off Heavy Attacks while enraged could leave him Stunned and vulnerable.

Hound (The Last Knight) – Hound’s ability to inflict Critical Rate Down with his Special Attack 1 will leave Kickback unable to inflict Power Leak with his basic hits.
Optimus Primal – Primal will completely negate Critical Hits, disabling much of Kickback’s ability set that revolves around Critical Hits.

Scout’s Sentry – Increasing Kickback’s Critical Rate and ability to Evade will ultimately help him survive while dishing out those potent Critical Hits.
Transwarp Cell – Ensuring Kickback routinely slams into his opponent with Heavy Attacks will allow him to take great advantage of his Consume and Signature abilities.


Re: Add TLK Hound to your Ultimate Squad in Transformers: Forged to Fight! (1951015)
Posted by D-Maximal_Primal on April 5th, 2018 @ 5:35pm CDT
Kabam has given us a pretty good game in the form of Forged to Fight, a game that gives you so many different Transformers characters from many different universes to choose from. That game has now reached its 1 year anniversary, so to celebrate, Kabam has released a new trailer showing off some of the first year stats, which have been mirrored below for you, along with some awesome gameplay.

Check it all out below, and let us know if you are enjoying the game and if so, how long have you been online and how many of the 39 bots do you have?

And if you don't have the game, you can download it from the app store or google play

Transformers: Forged to Fight has been played by over 20 million users around the world!
Over 230 million Crystals have been opened since the game launch
39 Bots released
Over 31 million hours played!
Over 88,000 Alliances have been created!
Over 710 million Fights have been completed!

Not sure but I'm gonna guess cinematic? All the bots that have (CIN) after them have both movieverse and G1/CombinerWars incarnations in the game so am assuming (CIN) are the movie ones.

Not sure but I'm gonna guess cinematic? All the bots that have (CIN) after them have both movieverse and G1/CombinerWars incarnations in the game so am assuming (CIN) are the movie ones.

that makes sense, thank you.

Anyways yeah I still quite like the game. As a time-killer on my phone for boring waits or tedious public transport journeys it does the trick nicely and has plenty of the movie characters I enjoy with a nice selection of the G1 folk (I'm not sure which Bludgeon is since he's based on the RotF toy but that got repurposed as G1 as well and I kinda count my toy as multiversal traveller between my Movie and G1-ish collections too).

Re: Add TLK Hound to your Ultimate Squad in Transformers: Forged to Fight! (1951997)
Posted by william-james88 on April 9th, 2018 @ 11:34pm CDT
Marcelo Matere is the legendary Transformers artist behind the box and card art for the majority of Transformers line since Armada. While still doing promotional and packaging art for Hasbro, he is also part of the staff at Kabam for their Transformers: Forged to Fight game, working as an illustrator. Below is a message he posted on his instagram account regarding the process for developing splash screen featuring Dinobot and Galvatron.

marcelomatere wrote:My process to develop one o the splash screens for the Transformers: Forged to Fight game. After the sketch approved I had to pose the great 3D models done for the Kabam’s Artists on the Unit and then finish the Illustrations with Photoshop. I’ve learned a lot with this process! Hope you liked! 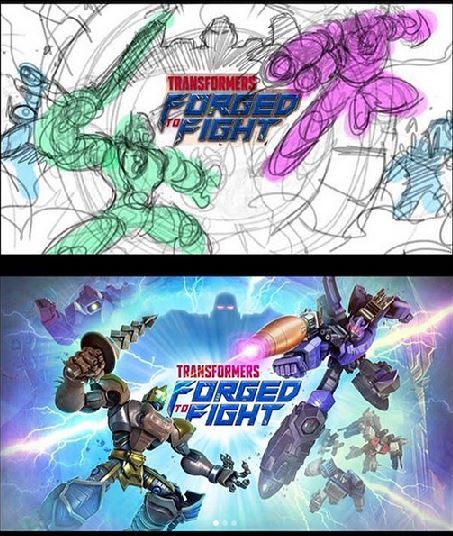 Emerje
Re: Add TLK Hound to your Ultimate Squad in Transformers: Forged to Fight! (1952067)
Posted by Jack Hallows on April 10th, 2018 @ 12:35pm CDT
isnt kabam the same company that created that Star Wars game a while ago just to promptly scrap it after only a year?

hmm... it’s only been a year since the launch of this game. looks fun, but i think i’ll give it a bit longer before downloading it and investing any of my time into it.
Click here to view additional comments about this topic at the Energon Pub Forums ...