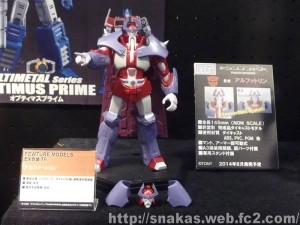 Courtesy of the Autobase Aichi Facebook page we have many additional images of the officially licensed Transformers products that were on display at Wonderfest.

First up we have Mega Drive Megatron from the Takara Tomy Arts line. The figure transformers from a Sega Genesis console and controller into Megatron!

Next we have an advertisement for the 55cm (approximately 22 inch) non-transforming Scorponok figure from Gigantic Action. Unfortunately the figure itself was not on hand, but this still gives us a good look at the prototype.

Fewture by Art Storm had a large display featuring many new figures and some of their previously announced products. Probably the most eye catching item is the prototype for a highly detailed giant Unicron head! They also have three new non-transforming figures int he works; Alpha Trion (160 mm - about 6.5 inches), Grimlock (180mm - about 7inches), and Optimus Prime (170mm - about 6.5 inches). Alpha Trion features alternate shoulder pads and head that allow him to become A3. Grimlock comes with an alternate head, sword, and both guns. Optimus Prime comes with his usual array of accessories; energon axe, ion rifle, and Matrix of Leadership. Rounding out their new products, two new super deformed figures; Optimus Prime and Rodimus Prime.

Lastly we have images from CM's Corp. On display was their upcoming Spike and Daniel Excel Suite set, which includes a Grand Galvatron minifigure and Master Sword Disk accessory. They are also teasing what appears to be a future Deathsaurus project based on the silhouette on the right side of the table.

Posted 2 days ago
News Categories: Toy News, Movie Related News, Comic Book News, Cartoon News, Site News, Rumors, Event News, Digital Media News, Collectables, Game News, Sponsor News, Site Articles, Store News, Company News, People News, Press Releases, Sightings, Reviews, Unlicensed Products News, Auctions, Transtopia, Interviews, Knock Offs, Editorials, Collector's Club News, Heavy Metal War, Podcast, Contests, Book News, Top Lists
Click here to post your comment about this news story!
Re: Additional Images from Wonderfest (1549317)
Posted by MINDVVIPE on February 9th, 2014 @ 8:11pm CST
That prime cut through might look neat, but its pretty stupid since he probably wouldn't have such large pistons and what not. If he actually transformed, I doubt there'd be room for such parts, but instead be made up of a collection of smaller parts that function in its own way as hydraulics and pistons and gears, and also allows for full transformation. Prime isn't a gundam mech, he's a transformer, which is much more complex and alien.

warzon3 wrote:Does anyone know anything on Fewture figures, are the kind of like Revoltech figures? Can you pose them, what size will they be? I think I would be interested in that Alpha Trion if the price and scale is right....

That giant Unicron head makes me kinda want a playset version for Legions or Kreons or something.