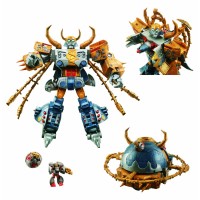 
The Amazon.com Exclusive Transformers 25th Anniversary Edition UNICRON is now in-stock and ready ship! This figure is a repaint Armada Supreme Class Unicron featuring Takara's Welcome to Transformers 2010 remolded head and a G1 inspired deco to coincide with the 25th anniversary of Transformers: The Movie in which he made his debut.

Product Description
From the Manufacturer
Unicron is the harbinger of chaos. He is the source of a deep and infinite darkness. He trolls the universe without haste or fear. Unicron devours the entire solar system with numbing precision. Unicron devours moons and stars and life itself. He cannot be stopped. Special edition.

kirbenvost wrote:CRAP ON A STICK! Do I buy it now or wait for the supposed Canadian release at Costco?

How much is it supposed to be at costco?
Re: Amazon Exclusive Transformers 25th Anniversary Edition Unicron In-Stock (1281507)
Posted by kirbenvost on August 25th, 2011 @ 4:21pm CDT
No idea, there's very little info on it. All I heard was that Hasbro announced it at TFCon. I don't even know if it's certain.

Now to go by a green led and a soldering iron

El Duque wrote:I did, but it probably would have been a better idea to just ask in the existing topic.

My apologies. You can lock or delete this if you like.
Re: Amazon Exclusive Transformers 25th Anniversary Edition Unicron In-Stock (1281521)
Posted by El Duque on August 25th, 2011 @ 4:52pm CDT
Don't worry about it, just for future reference

Re: Amazon Exclusive Transformers 25th Anniversary Edition Unicron In-Stock (1281539)
Posted by Kibble on August 25th, 2011 @ 5:14pm CDT
Signed up for the Amazon credit card, used the $40 credit toward this, Unicron shipped for $19.99...couldn't pass it up even if I already have the Takara version (which is better

Kibble wrote:Signed up for the Amazon credit card, used the $40 credit toward this, Unicron shipped for $19.99...couldn't pass it up even if I already have the Takara version (which is better

Wow, I wish I could do that!

Razama wrote:And its gone! or unavailable for now! I think I pick up the last one!

I wonder if this was an error and it wasn't supposed to be up yet. I can't imagine there would be such a small quantity.
Re: Amazon Exclusive Transformers 25th Anniversary Edition Unicron In-Stock (1281555)
Posted by cannonfodder4000 on August 25th, 2011 @ 5:43pm CDT

Razama wrote:And its gone! or unavailable for now! I think I picked up the last one!

Woah, this soon?! I'm glad I ordered as soon as I did then, cause I knew if I didn't do it now, I won't be able to get it later.

Razama wrote:And its gone! or unavailable for now! I think I pick up the last one!

I wonder if this was an error and it wasn't supposed to be up yet. I can't imagine there would be such a small quantity.

I remember TRU doing similar things to hot items. They would get a first batch out, get them out of stock and wait for a second shipment to come in for online sales. Worst case scenario is having to wait until Oct for others to order it. That would suck.

Though, the Takara one has slightly more correct use of its colors than the Hasbro one. Like, the Takara one has orange upper arms, more solidly-colored legs, orange stomach sides, a straight stripe of orange going down the center of the chest, and an overall more subtle color scheme with a correct shade of gray.

On the downside, the Takara one has a fully orange main torso (when it should have more gray in certain places), black knees, too many little silver details that are otherwise unnecessary, and a lack of paint going around the back of his head from cheek-to-cheek.

On the other hand, the pluses of the Hasbro one are its knees colored the same as its lower legs, a gray upper torso, a red Planet Mode maw, a painted Planet Mode equator, a correct shade of blue for Planet Mode, and overall more accurate shades of orange and blue.

But, it also has far too many little red and silver details that are really unnecessary, too shiny a silver, a jagged orange stripe going down his chest all zigzag-like, gray stomach sides, garish and gaudy orange and silver details are his legs, Red LED eyes when he should have green, and an overall disorienting color layout.

If only Hasbro and/or Takara had taken the positives of both versions, discarded/fixed as many negatives as they could, and attempted to give us something as closer as possible to this without further remolding or making a new figure, then this would have been an instant win.