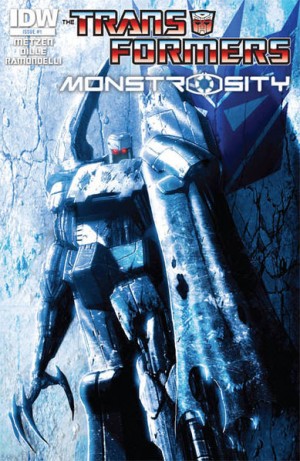 Adding to a number of listings for picture books available via online retailer Amazon.com, we also now have news of more forthcoming IDW collected volumes for Transformers comics - due September 2016 - and including both TPBs (for More Than Meets the Eye) and another volume in the IDW Collection series. Check out more info below, and beware, there are minor spoilers if you're not up to date with the comics!


In the early days of the war on Cybertron, two leaders start down their paths towards destiny. Meanwhile, on current day Cybertron, Megatron is back! Everything Bumblebee and his Autobots have built teeters on the edge of collapse and Starscream has to make the choice his whole life has been leading to. On the Lost Light, a secret prisoner is confined in the bowels of the ship. Collects the Monstrosity mini-series, Robots in Disguise #12 18, and More Than Meets the Eye #14-16.

Megatron has rejected his past, but that doesn t keep him safe from the Decepticon Justice Division. Meanwhile, Getaway is staging a mutiny on the Lost Light, all leading to a climactic showdown, and not everyone will come out the other side. Collects issues #50-55.

Posted 3 days ago
News Categories: Toy News, Movie Related News, Cartoon News, Comic Book News, Site News, Rumors, Event News, Digital Media News, Collectables, Sponsor News, Game News, Site Articles, Store News, Company News, People News, Press Releases, Reviews, Sightings, Unlicensed Products News, Auctions, Transtopia, Interviews, Knock Offs, Collector's Club News, Editorials, Heavy Metal War, Podcast, Contests, Book News, Top Lists
Click here to post your comment about this news story!
Re: Amazon IDW Transformers Listings: IDW Collection Volume 4, MTMTE Volume 10 (1785083)
Posted by D-Maximal_Primal on April 28th, 2016 @ 6:16pm CDT
Remember back when we showed off those IDW comics listings? Well, now we finally have cover images for both of them! The first book is IDW's critically acclaimed More Than Meets The Eye, this time with its Tenth Volume and it features the main Issue 50 cover as its cover. The second book would be the hardcover Transformers: IDW Collection Phase Two Volume 4 with the cover featuring Prowl. We have mirrored the cover images below for your enjoyment. Check them out, and let us know what you think of them in comments section below. And as always stay tuned to Seibertron.com for all your latest Transformers News and Galleries!

At the dawn of the conflict, battle lines are drawn and sides are set… now legends will be made in PRIMACY. On current Cybertron, Shockwave sets into motion a long-gestating plan but Soundwave, now commander of the Decepticons, confronts him in the ancient Crystal City. On the Lost Light, Rodimus leads his crew to the gates of heaven–or something much worse as larger forces close in and an ancient plan is reaching fruition.