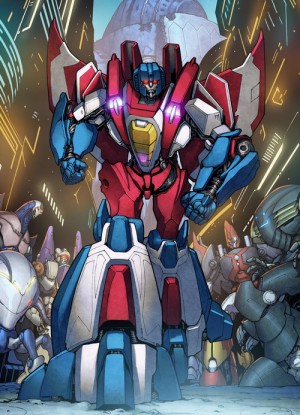 Artists on Robots in Disguise and Dark Cybertron, and a lot more, Andrew Griffith has popped by to let us know he will be attending the Emerald City Comicon, March 28-39, Seattle. He'll be there all three days, signing autographs, selling sketches, prints, and published work he has worked on! Joining him is also concept artist Ken Christiansen, contributor to the Covenant of Primus and Transformers: Legends. Check out the convention site here!

We are the premier comic book and pop culture convention in the pacific northwest! Check out the site to find the latest on everything ECCC, including lists of guests, exhibitors, artists, schedules, gaming and events! While you're here, don't forget to check out our original webcomic, Tales From The Con, all the photo galleries from years past and much, much more!

I'll be a guest at Emerald City Comicon, March 28-30, at the Washington State Convention Center.

You can find me at table U-04, where I'll be selling prints, sketchbooks, original artwork, and taking commissions. Commissions are first come first serve, each day of the con.

I will have with me 3 new Transformers prints - Seekers Wave 2 - the "Coneheads"! Here is a tease of Ramjet, Dirge, and Thrust...

Additionally, I have a piece published in this years' annual ECCC Monsters & Dames book, and I've donated the original piece to the charity auction being held Saturday, March 29th at 8:00, in Hall D. Proceeds from these items go to benefit Seattle Children's Hospital.

While the piece in the book is in color, the original up for auction is black and white. 11"x17", pencils and inks, on bristol board.

Re: Andrew Griffith and Ken Christiansen to Attend Emerald City Comicon - Seattle, March 28-30 (1559433)
Posted by BumbleDouche on March 23rd, 2014 @ 3:57am CDT
Love the way this guy draws his robots, all except for the faces... There's always something NQR about the faces.