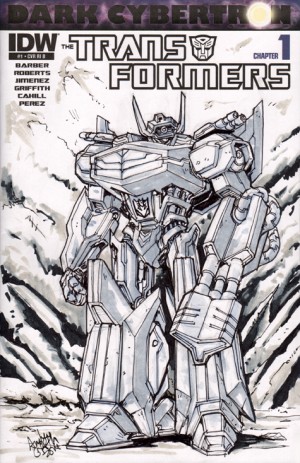 We reported not too long ago that IDW Publishing Transformers artist and Seibertron.com friend (we like to think so, in any case) Andrew Griffith would be attending various conventions over the summmer, and had a commission list open. He has dropped by to remind us that the first of those events is taking place next weekend in New York! Sole representative of the Transformers in the whole of New York Special Edition - the first of the summer edition by the organisers of NYCC - make sure to drop in an say hi, get a sketch and a chat if you're attending.

I wanted to let you know that next weekend, June 14-14 I'll be at the New York Comic-Con Special Edition at the Javits Center, New York, NY.

This is the inaugural kick-off event for this Con as its the first time the organizers behind New York Comic-Con have held a second event with an emphasis on comics and the comics industry.

So for any Transformers comics fans or comics fans in general stop by and say hello. I'll be selling prints, sketches, comics and original art all weekend.