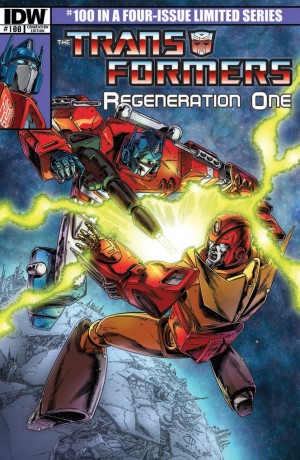 Once again, long-standing Transformers artist Andrew Wildman celebrates the end of ReGeneration One and the 30th Anniversary of the Transformers with his own spin. Starting Monday 21st April, he will be auctioning 30 issues of the convention variant cover for issue #100 of IDW Transformers: ReGeneration One, especially to reach non-UK fans or those who cannot attend conventions as easily, and each copy will come with a sketch of one of six characters! Check out below, or head to his blog, for more information.

Beginning on Easter Day will be an eBay listing to commemorate the 30th anniversary of Transformers.

I am Bagging and Boarding 30 copies of the Convention Variant cover of Transformers Regeneration One #100. Each of the backing boards will have a sketch on the back. The 30 issues will be divided into 6 releases of five. There will be five sketches of Optimus Prime. Five sketches of Megatron - ya get the idea- then Ultra Magnus, Galvatron. Rodimus Prime and Bludgeon. The Optimus Prime sketches begin on Easter Day at 8pm UK time and runs for seven days.

The idea behind this is to not only commemorate the 30th anniversary but to enable those who can't get to UK conventions that I am attending to be able to get a copy of the comic and a sketch. Those of you who have seen me at conventions know that I do sketches but there are, needless to say, many Transformers and comic conventions that I won't be at. Below are the five Optimus Prime sketches that constitute this release. It's pot luck as to which bidder will get which sketch but that's part of the fun.

As you will see below I have decided to donate all the proceeds from the fifth winning bidder to the Make-A-Wish foundation. this is my favourite charity and the one that we support as Draw The World Together. Anyone not familiar with the activities of DtWT click the link and take a look. We don’t have a lot of time or facility to do much with DtWT these days so it is nice to be able to raise a bit of money for the charity.

So. set your alarm for the start of the bid and cross your fingers.

The auction for the next batch of five Transformers Regeneration One comics has now goe live, This time around each signed comic will include signed original ULTRA MAGNUS sketch.

Links for the five items are;

Re: Andrew Wildman Auctions 30 Transformers: Regeneration One #100 Special Variant Covers with Sketch (1590953)
Posted by Va'al on July 15th, 2014 @ 1:49pm CDT
Renowned Transformers artist Andrew Wildman continues his ReGeneration One #100 charity auction streak, shifting back to the purple corner for the next five sketches - the mighty Galvatron! Check out the auctions here, and make sure to drop by his blog for more on the Wildman himself and his work.

this is "the end" for the original g1 comic continuity...not all things called G1.
also......The G1 marvel comic predates the cartoon.
Re: Andrew Wildman Auctions 30 Transformers: Regeneration One #100 Special Variant Covers with Sketch (1601772)
Posted by Va'al on August 25th, 2014 @ 6:57am CDT
Not only is Transformers artist Andrew Wildman setting up charity auctions for the final issue, he has now also decided to share more of his work with fans, by auctioning off original work from behind the scenes of Transformers: ReGeneration One! Check out his blog and below for more info, and take a look at some of the first batch of pages on offer.

Re: Andrew Wildman Auctions 30 Transformers: Regeneration One #100 Special Variant Covers with Sketch (1603620)
Posted by Va'al on September 2nd, 2014 @ 12:10pm CDT
Old school Transformers artist Andrew Wildman is still at it, offering his penultimate batch of signed and sketched issue of IDW's Transformers: ReGeneration One, this time round featuring the Master of Metallikato Pretender - Bludgeon. Check out the auctions here, or via his blog, a remember that part of the profits are for a charitable cause!

Re: Andrew Wildman Auctions 30 Transformers: Regeneration One #100 Special Variant Covers with Sketch (1606467)
Posted by Va'al on September 15th, 2014 @ 8:26am CDT
Another comics update, and it's the last batch of Andrew Wildman's Transformers: ReGeneration One #100 special signed editions with sketched boarding cards - and charity donation. Check out below the selection of Rodimus sketches on auction, and head here to bid!

Hot comp.jpg
Re: Andrew Wildman Auctions 30 Transformers: Regeneration One #100 Special Variant Covers with Sketch (1626676)
Posted by Va'al on December 3rd, 2014 @ 9:18am CST
Here's a bit of a treat, with a charitable cause, for all Transformers comics fans. Artist and general godfather of the Cybertronian aesthetics for the past 30 years, Andrew Wildman, has collected the signatures of Bob Budiansky, José Delbo, Simon Furman, Geoff Senior, Lee Sullivan, Stephen Baskerville, Andrew Wildman, Guido Guidi, Nick Roche, Jason Cardy, John Paul Bove and Casey Collier - all on the Guidi after Sienkiewicz cover for IDW's ReGeneration One! He is auctioning off 30 of these special issues, with the profits going to help comics creator and first Transformers writer Bill Mantlo. So head over to eBay, bid your savings, do some good, and own a part of robot history.