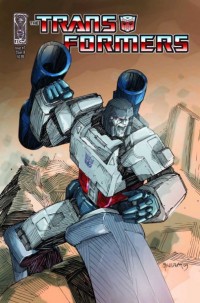 Acclaimed artist Andy Wildman may well have drawn his last Transformer. He has updated his blog and has this to say about drawing the last of six covers for the IDW comic books:

However he teases us a little about further involvement:

Andy Wildman wrote:Of course, there are some loose story ends from the old days that it would be great to tie up. Who knows. That opportunity may still occur

You can read the whole story and see some of his work here.

Posted 1 day ago
News Categories: Toy News, Movie Related News, Cartoon News, Comic Book News, Site News, Rumors, Event News, Digital Media News, Collectables, Game News, Sponsor News, Site Articles, Store News, Company News, People News, Press Releases, Sightings, Reviews, Unlicensed Products News, Auctions, Transtopia, Interviews, Knock Offs, Collector's Club News, Editorials, Heavy Metal War, Podcast, Contests, Book News, Top Lists
Click here to post your comment about this news story!
Re: Andrew Wildman: Drawn His Last Transformer? (1086277)
Posted by ausbot on June 14th, 2010 @ 7:51pm CDT
Let us hope the loose end is a real finish to the G2 comic. (And yes I know about alinment but that was text and unofficial)
Re: Andrew Wildman: Drawn His Last Transformer? (1086285)
Posted by PhunkJunkion on June 14th, 2010 @ 8:07pm CDT
I hope he hasn't drawn his last Transformer. I can remember when he took over penciling the US Marvel comic. His style really grew on me so much so that I was hugely disappointed when he didn't work on the big Unicron storyline wrap-up in #75. I have very fond memories of those final issues.
Re: Andrew Wildman: Drawn His Last Transformer? (1086289)
Posted by Down_Shift on June 14th, 2010 @ 8:11pm CDT
As much as I love Andy Wildman for his contributions to Transformers, I'm glad he's moving on to other projects. I mean his incentive covers as of late have been just incredible, and his artwork in the 80's is what helped a lot of us to fall in love with our favorite characters but his style is outdated in contrast to what we've all become accustom to.

I will smile, be happy for him, and try to forget Dark Ages ever happened

Re: Andrew Wildman: Drawn His Last Transformer? (1086316)
Posted by ImperiaxPrime on June 14th, 2010 @ 9:30pm CDT
I'm not going to be sad about this. I've never enjoyed Wildman's art when it comes to transformers. I realize I will be branded as a heretic by many but oh well, wouldn't be the first time. The problem is this: He doesn't draw robots, he draws people in armor.

Bon voyage Andy! May you find joy in projects better suited to your talents.
Re: Andrew Wildman: Drawn His Last Transformer? (1086392)
Posted by VonDoom on June 15th, 2010 @ 5:14am CDT
I agree with ImperiaxPrime no big loss, he has admitted in an interview (on the madman transformer dvds) that he never wanted to draw transformers and also that he did draw them more as people. After seeing that interview it just made me prefer the artists who are actually fans of the transformers or at least have the ability to make a machine look like a machine and not a transformer cosplay.

I really hope he's not swearing off for good though. i REALLY REALLY liked the covers he's been doing lately. theyve got a lovely barry windsor smith feel off em.

TBH i wouldnt mind seeing a mini done in that style.