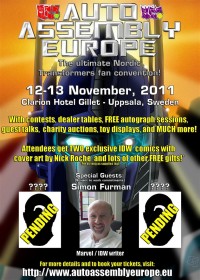 Auto Assembly 2011 has just ended, but you haven't missed out on the news that there is a second Auto Assembly this year, have you?

Taking place at the Clarion Hotel Gillet in Uppsala, Sweden, on November 12-13 is the premiere Transformers fan convention in the Nordic region! Right smack in the middle of Uppsala, a city filled with history and tradition, is the Clarion Hotel Gillet. Easy to get to, situated on a quiet street free from traffic, close to the busy town centre with restaurants, bars, and shops.

We have looked at what activities and programme items to have in order to make it a great weekend for everyone who joins in on the fun, including a selection of guests and we've listened to who YOU want to see!

The first of our guests is a man who is back in the Nordic region at the request of our voters who participated in the poll we had going earlier this year. It is someone who barely needs an introduction; the one and only living legend, Simon Furman!

Simon Furman started writing for the UK Transformers comic in 1985 and took over the US book in 1989. He has continued writing Transformers books for more than for 25 years, for Marvel Comics, Dreamwave Productions, IDW Publications, and Titan Magazines. He also wrote the final episode of the Beast Wars show on television. We are very excited to have him back at Auto Assembly Europe, and we hope that you are too!

We are working hard to bring you the best possible programme, making sure there is something for just about everyone. We will have not one, but TWO charity auctions during the weekend, auctioning off some great items, including signed photographs! The proceeds will be donated to a charity of our choosing. Full weekend attendees will get an additional BONUS PROGRAMME, and we have something very special planned! Apart from that, there will also be guest talks, FREE autograph sessions, competitions, and much more!

We're also bringing back the famous goodie bag, packed with awesome stuff for attendees, FOR FREE! For starters, we have copies of BOTH the 2009 and 2010 IDW Transformers comics with Auto Assembly exclusive cover arts by artist Nick Roche for the first 100 attendees, ALL of the Auto Assembly 2011 postcards with exclusive art on them, amazing bumper stickers, exclusive lanyards for you to have your Auto Assembly Europe passes in, and more!

All this and a move to a brand new, bigger, more luxurious venue. What more could you ask for? Special discounted room rates from the hotel so it's cheaper for you to stay there? We already did that as well!

Come to Auto Assembly Europe in Sweden this November and be part of a memorable weekend with lots of fun!

For more information and for the latest news and updates, visit Auto Assembly Europe

Auto Assembly Europe is sponsored by:

At long last, after lots of problems with a new third-party registration system that didn't want to integrate, and a reversal to the same homemade system that we used last year, the registration for Auto Assembly Europe 2011 is finally open!

New features this year include an immediate e-mail receipt with the total sum and payment instructions, and a PayPal button for those who want to pay right after registration. If you use that option, keep an eye open for mistakes. It should work; I have tested the function as best as I can, but even in a tested application there's always a risk that something goes wrong, and this is the first time I've implemented a PayPal button.

We had planned to start adding some information pages, but ran out of time for now. We have included a presentation of the convention in the registration form though, and will add those other pages as soon as we get the chance.

Auto Assembly Europe 2011 is only two months away and we are pleased to announce that ticket bookings are now OPEN! Here's our latest update with details of ticket prices, an update on our goodie bag and some more of the activities taking place at the convention taking place over the weekend of 12th - 13th November 2011 in Uppsala, Sweden.

To find out more about the convention or to book your tickets, visit the website at http://www.autoassemblyeurope.eu