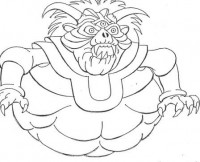 Jim Sorenson over at his 'Disciples of Boltax' Blog has posted the 6th portion of the Webworld episode. This one focuses on the species that call Webworld their home. You can check out what Jim has to say and a portion of the sketch below.

Hope you're not sick and tired of Webworld yet! This week, some of the patients who undergo the therapies of the Torkuli.

Let's see - there's an orange blob of protoplasm with a long tongue who calls everyone mommy. He gets to whack at one of his tormentors at the end of the episode.

There's a bouncing guy, who rather antagonizes Galvatron during Exo-Drama.

There is a three headed alien who sits and chants 'I have no head.'

There's a tyrannosaurus looking alien that Galvatron argues with at the beginning of the episode.

Finally, there's a six-legged insectoid centaur kinda thing that didn't make it into the episode itself. Interestingly, an actual centaur DID make it in, but alas I've got no model for it. It wasn't very prominent anyway.

Hope you enjoy! I'll probably take a few days off posting, as I'll be spending Thanksgiving with the in-laws and may have spotty access. Stay tuned for more Webworld next week.

You can check out the rest of the blog update here.

Keep it tuned to Seibertron.com, your Ultimate Transformers Resource!