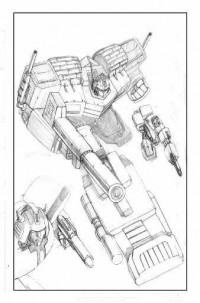 The official Transformers facebook page gives us a look at the creative process behind the cover of IDW's Transformers: Autocracy #11 by artist Livio Ramondelli. Mirrored below for those without facebook access.

1) The Layout
With this cover, I knew I wanted to do an action shot. I’d done a variety of different covers for Autocracy ranging from character shots to more metaphoric covers (like 7 and 9). But I hadn't done a real action shot. And since this is the issue where the Autobots really rally against the Decepticons, I knew I wanted something with Optimus Prime and his soldiers leaping into danger. The layout here remains pretty darn close to the final cover, both in pose and in color choices.

2) The Lineart
This stage is really all about the more mechanical (no pun intended) work of tightening the layout into a workable cover. It can be tricky overlaying the Transformer’s naturally blocky limbs and bodies onto a quickly sketched pose as it can sometimes suck the life from it. But the hope here is to keep the same momentum from the layout and carry it into the final.

3) Shadows and Light
Here, I’ve blocked in the basic colors beneath the lineart and begun to add the basic shadows and light sources. I knew I wanted the Autobots to be leaping toward incoming fire, and so I’m having light begin to shine along their faces, chest, and anything else angled to the lower right of the composition.

4) Textures, Lasers, and Fire
This is essentially like the “Special Effects” stage of the cover, where I’ve now put in all the laser blasts. I thought it’d be visually cool to have the Autobots literally on fire as they’re jumping in formation. I’ve also added a background here, and used a motion blur effect which makes it seem like the characters are moving pretty quickly through space. I’ve also started to add the textures I always like to add when I render Transformers. The various nicks, dents and scuff-marks that hopefully make the ’bots look like they've been around a while.

5) Final Lighting
In this step, I’m really just adding the final light to the piece. This stage can really affect the mood of a cover, ranging from how ominous or bright you’d like something to look. The trick is always to balance out the colors so that you aren’t looking at an eyesore, and there’s always some covers that balance out better than others. I decided on making the overall cover pretty dark, so that the various laser fire really pops out, as well as adding a few strong bright highlights along the ’bots.

"We had Apple approval delays in the IDW and Transformers apps. It should be live soon. Otherwise, you can purchase it now at read.idwpublishing.com, and then when it's live it the app it will show in your purchased books..

I am having trouble finding Transformers Autocracy 11 on the App Store. All the other issues come up fine but this one doesn't seem to exist. I'm looking forward to reading it, can you tell me when it will be available?