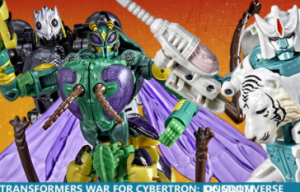 ------------------------------
NEW PRE-ORDERS
------------------------------
From the hit superhero comedy Deadpool, comes a new S.H.Figuarts figure of the titular character! Joining Vampirella and Purgatori, Red Sonja, outlaw, mercenary, warrior, and queen, is now a 1/12 scale action figure! Celebrating 40 years of Elvira, Mistress of the Dark! The devilishly delightful Cassandra Peterson has played the part of Elvira for 40 years with grace, humor and more than a little camp. NECA is proud to present this fiendishly fantastic figure for your horror collection. From Sailor Moon Eternal comes a figure of Super Sailor Moon as part of the FigurartsZero Chouette line! Tigatron, Waspinator and Shadow Panther are joining the War for Cybertron: Kingdom series! By the power of Grayskull! MOTU fans, be sure to grab the BBTS exclusive Grayskull themed cookie jar, stein and tiki mug! Ready up! The time has come to assemble a squad and unlock the legendary Fortnite game universe…in the real world. The Victory Royale Series takes Fortnite figures to the next level with highly poseable and detailed designs based on fan-favorite character outfits from the Fortnite video game. Wearing her extravagant red dress from the Wall Market section of the Final Fantasy VII: Remake video game, Aerith Gainsborough returns to the Play Arts Kai figure line! Capcom, Iconiq Studios, and TBLeague are proud to present the highly-detailed 1/6 scale Ryu figure from the genre-defining video game franchise Street Fighter. 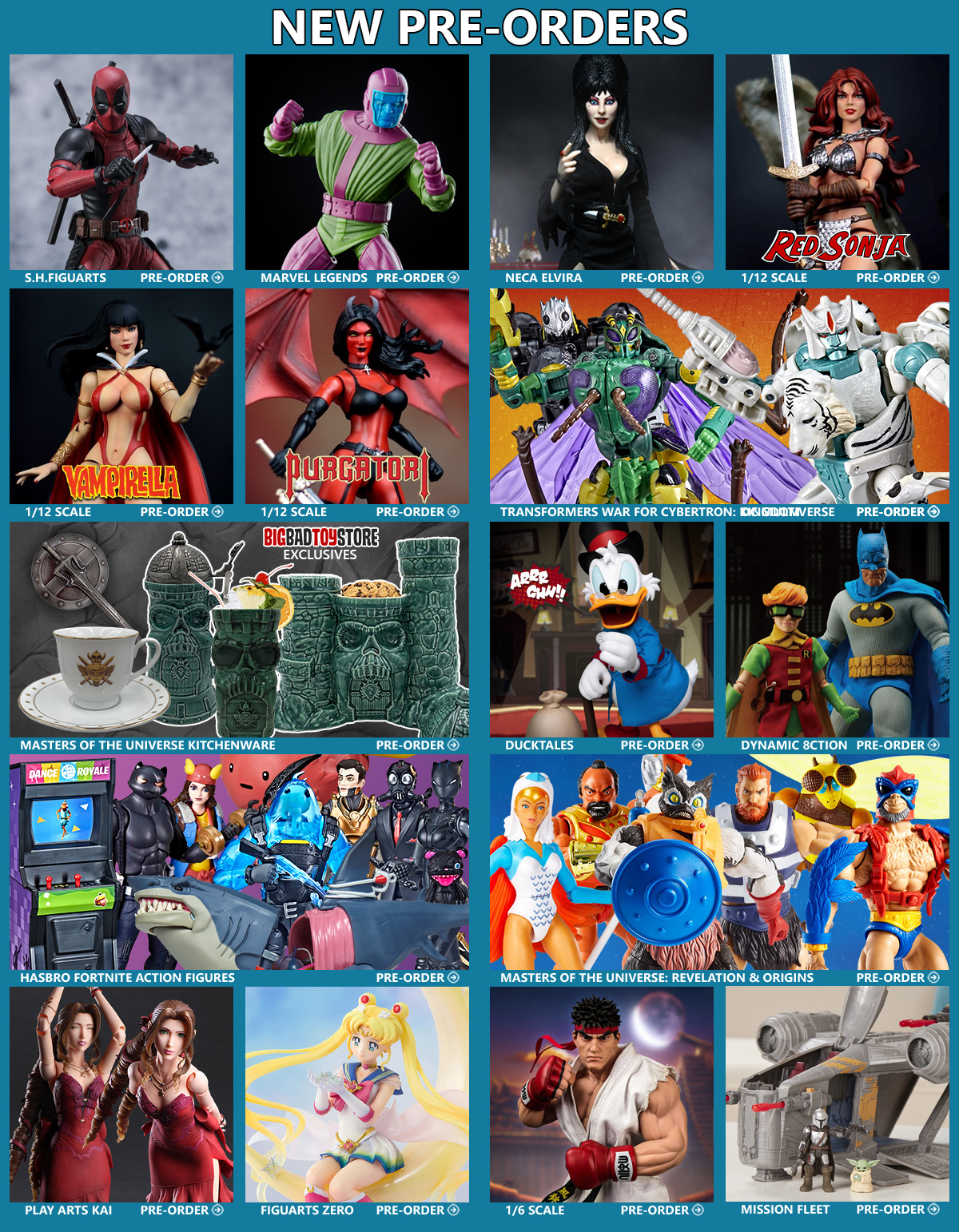 ------------------------
NEW ARRIVALS
------------------------
The ThunderCats Ultimates line from Super7 continues with the third wave including Jaga, Slithe, and Captain Cracker. Super7 is excited to introduce the newest figure to their Ultimates series, iconic heavy rock phenomenon, Papa Emeritus I. Elevate your Ghost collection to new heights! Equip yourself with the stealth version of Captain America's shield from the film, Captain America: The Winter Soldier. Recreate Goku stuffing his face with delicious food using this S.H.Figuarts accessory set! In addition to the traditional round table, chairs, and dinnerware, this set includes a background sheet and a ton of food. Replace the separately-sold S.H.Figuarts Goku with a facial expression that shows his mouth full of food, and hands holding chopsticks, forks, and bowls for a fun eating scene. This Transformers Studio Series Voyager Thrust figure converts from robot to tetrajet mode in 31 steps. Remove backdrop to showcase Thrust in the Cybertron Falls scene. In the Cybertron Falls scene from Transformers: Bumblebee, the Autobot resistance retreats to escape the planet as Cybertron falls under Decepticon control. Mego Corporation has created Leatherface, from the classic Texas Chain Saw Massacre series, as an 8-inch action figure! 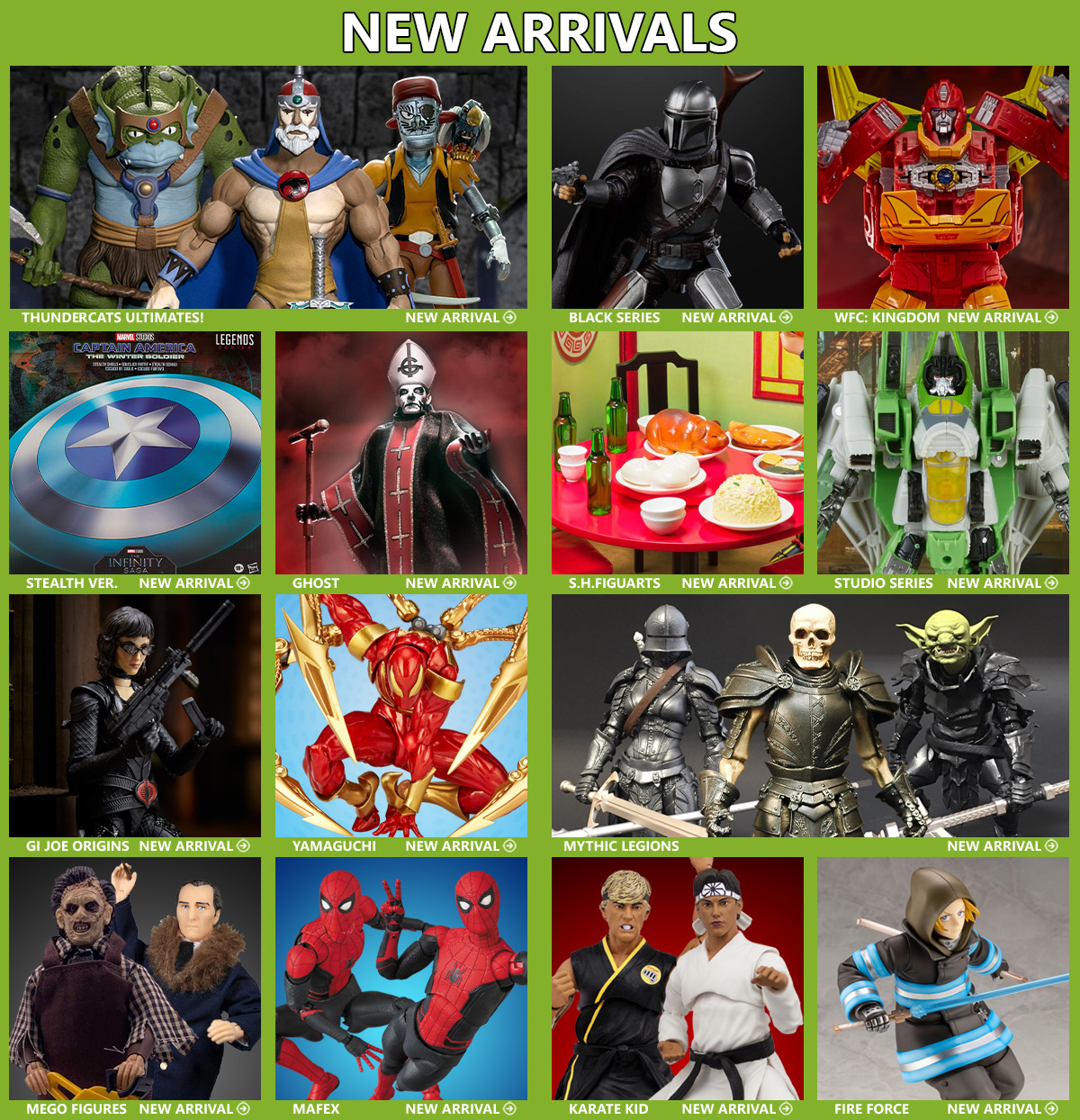 ------------------------------
NEW PRE-ORDERS
------------------------------
These 3.75-inch-scale Retro Collection figures are detailed to look like the characters from The Mandalorian live-action series on Disney Plus, featuring design and detailing inspired by 1970s Star Wars figures. More of Angel Grove’s most awesome heroes and villains are about to get the ULTIMATES! upgrade! The second wave of Mighty Morphin Power Rangers ULTIMATES! adds two more teenagers with attitude with the Mighty Morphin Pink Ranger and Red Ranger, along with the mighty Dragonzord, the diabolical villain empress Rita Repulsa, and her magical minion King Sphinx! The Furai model kit series brings G.I. Joe character Storm Shadow and his Arashikage Cycle to the line! From the classic movies Gremlins and Gremlins 2: The New Batch! NECA is bringing back some fan favorites long out of production plus adding a brand-new character. Fresh Monkey Fiction has brought back and reimagined Eagle Force, the beloved modern military action figure line from the 1980's. Takara Tomy's new Masterpiece G series features the trainbots made popular in the TV anime Transformers: The Headmasters. The first in the line is Shouki, a triple-changer that can transform from robot, to train engine, to combiner mode, and back again. From the exciting 2D action shooting game Cuphead comes the main character as an action figure from 1000Toys! 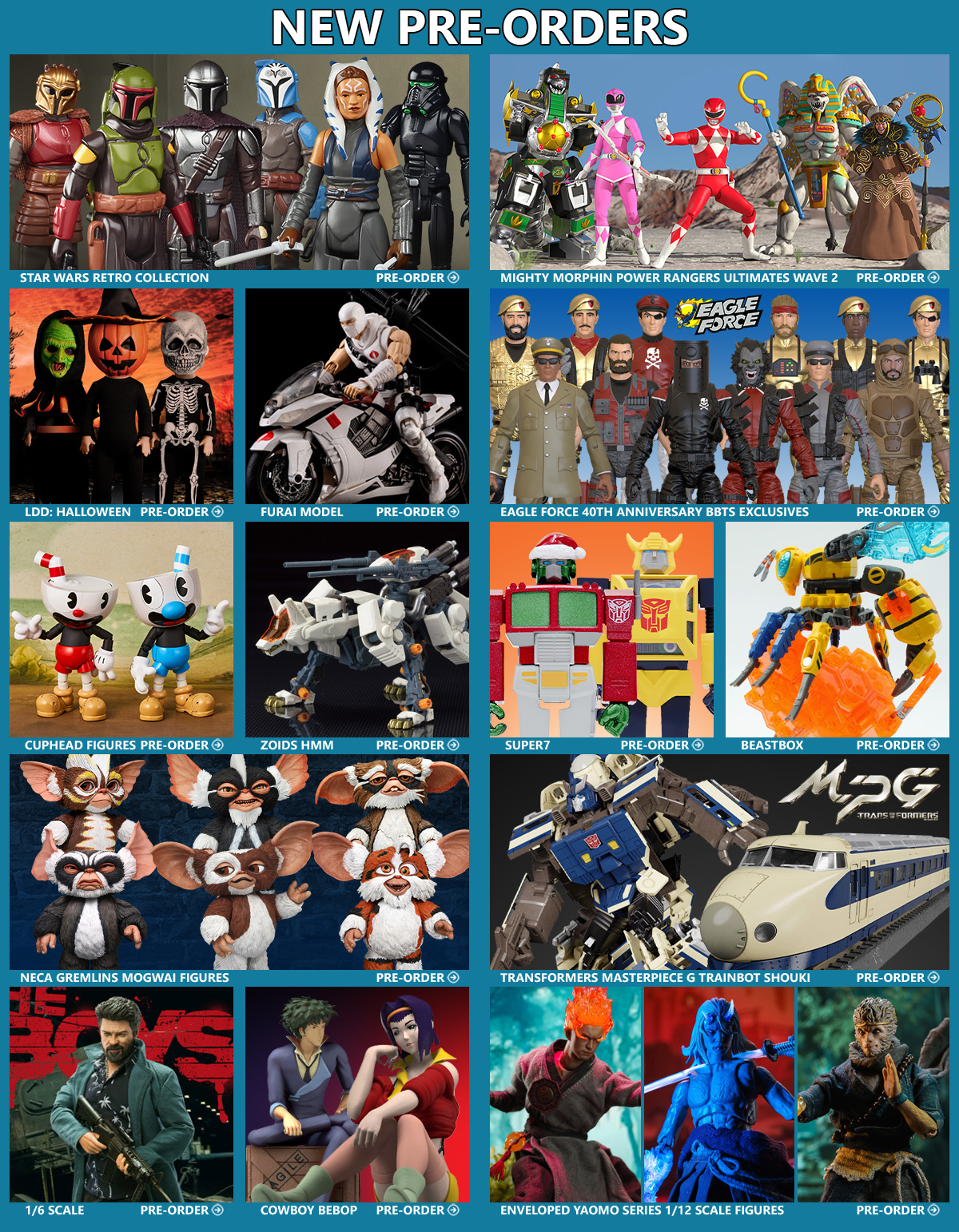 ------------------------
NEW ARRIVALS
------------------------
Threezero teams up with Hasbro once again for their series of 1/6 scale collectible figures—all redesigned by Threezero and inspired by Hasbro's retro G.I. Joe characters! Standing 12 inches tall, the 1/6 Storm Shadow collectible figure features Threezero's standard fully-articulated body with fabric hand-tailored costuming with a high attention to detail. From the new new Disney Mirrorverse video game comes a figure of Buzz Lightyear! The Wand Company is excited to bring you this highly accurate Great Ball replica! This Great Ball features a colored surface that is sensitive to touch and proximity. Simply get near the Great Ball and watch the button glow! Imagine donning the signature helmet of Darth Vader with the wearable Darth Vader Premium Electronic Helmet from Star Wars: The Black Series, featuring collar, mask, and hood pieces for multi-piece, adjustable fit and assembly. The fearsome Thunder Wolf Wyvern Zinogre joins S.H.MonsterArts! Exquisite sculpting captures its sharp talons (which come in two variations) and distinctive four-legged gait. Wolverine is now in the Fighting Armor action figure series. Wolverine is modeled with die-cast and clear parts in high detail. With alternate hands and a pedestal base, you can pose Wolverine with perfectly posed action! 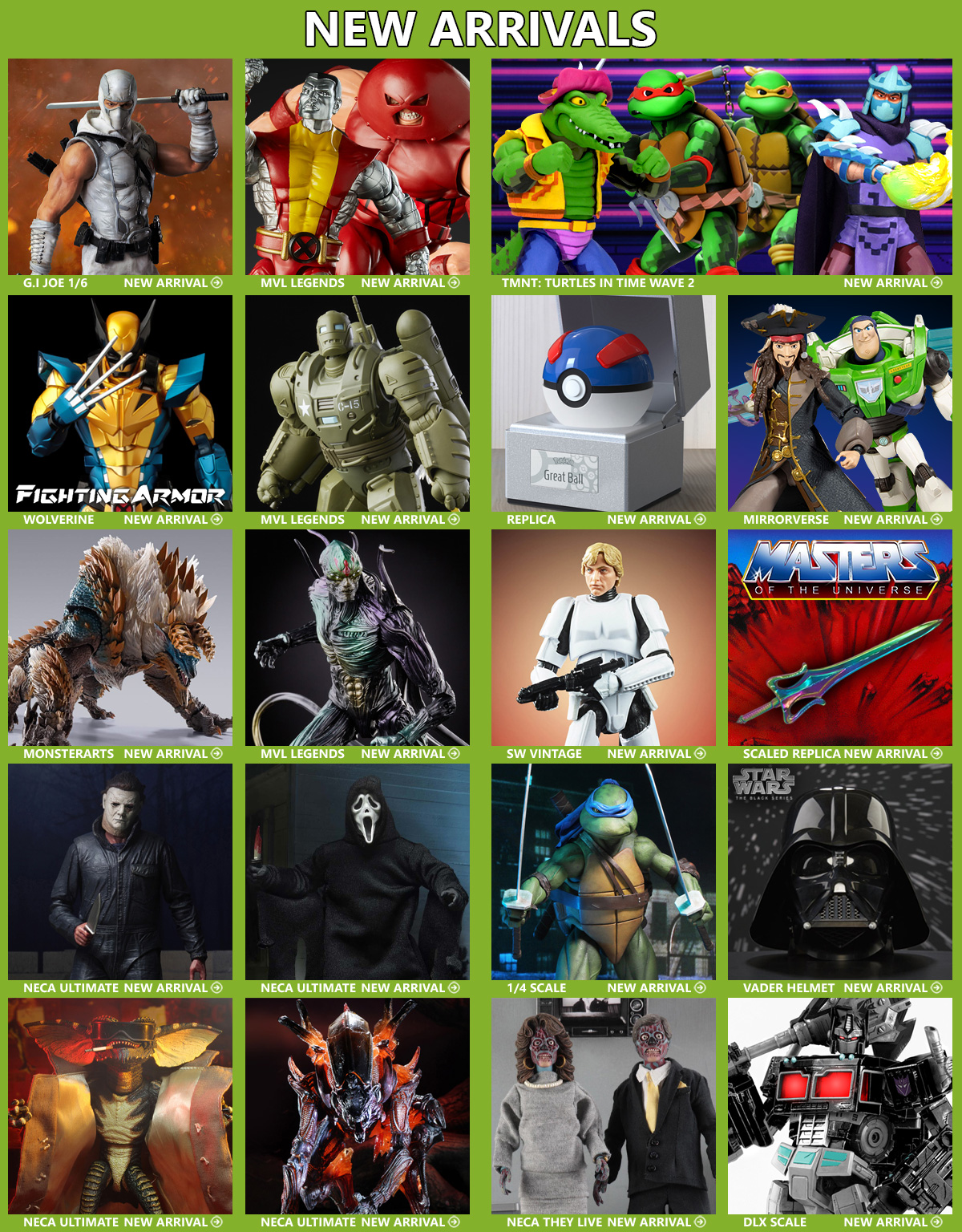