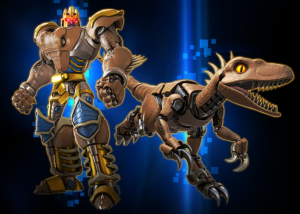 We knew that this was going to happen, but we now have the full reveal of the Beast Wars favourite for many joining Kabam's mobile game Transformers Forged to Fight: Dinobot! The character has been available as of Thursday November 2nd, and you can read the full tech specs below to decide whether or not the Predacon turned Maximal has received what he deserves. Are you still playing the game? Do you like the 4.0 update? Let us know in the discussion thread in the Energon Pub! 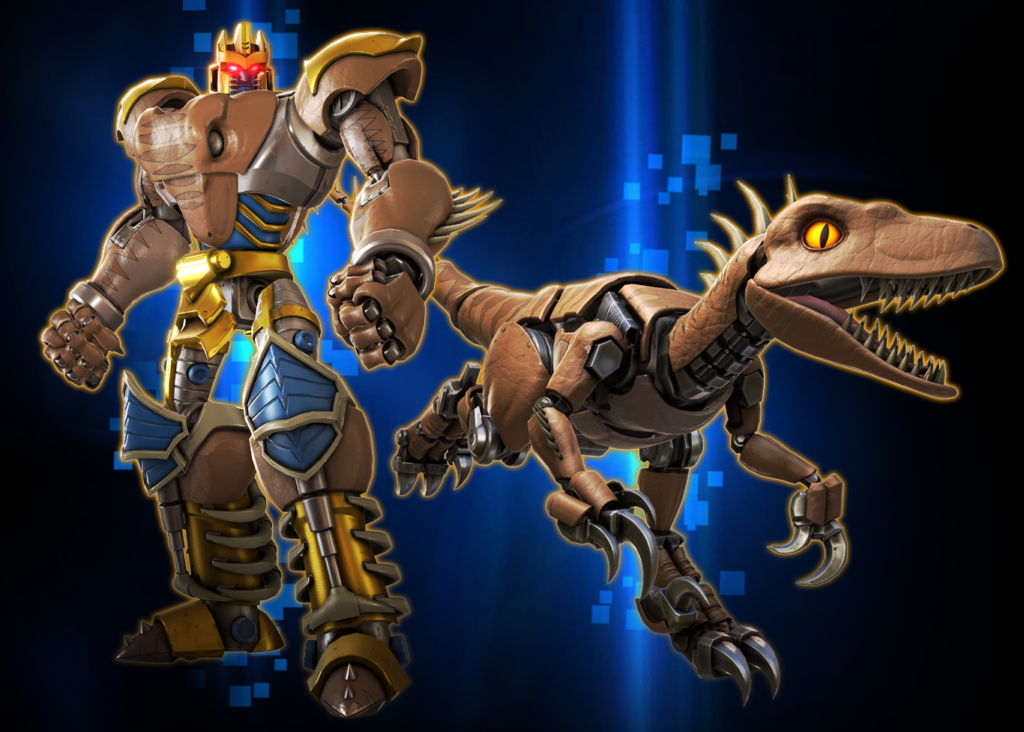 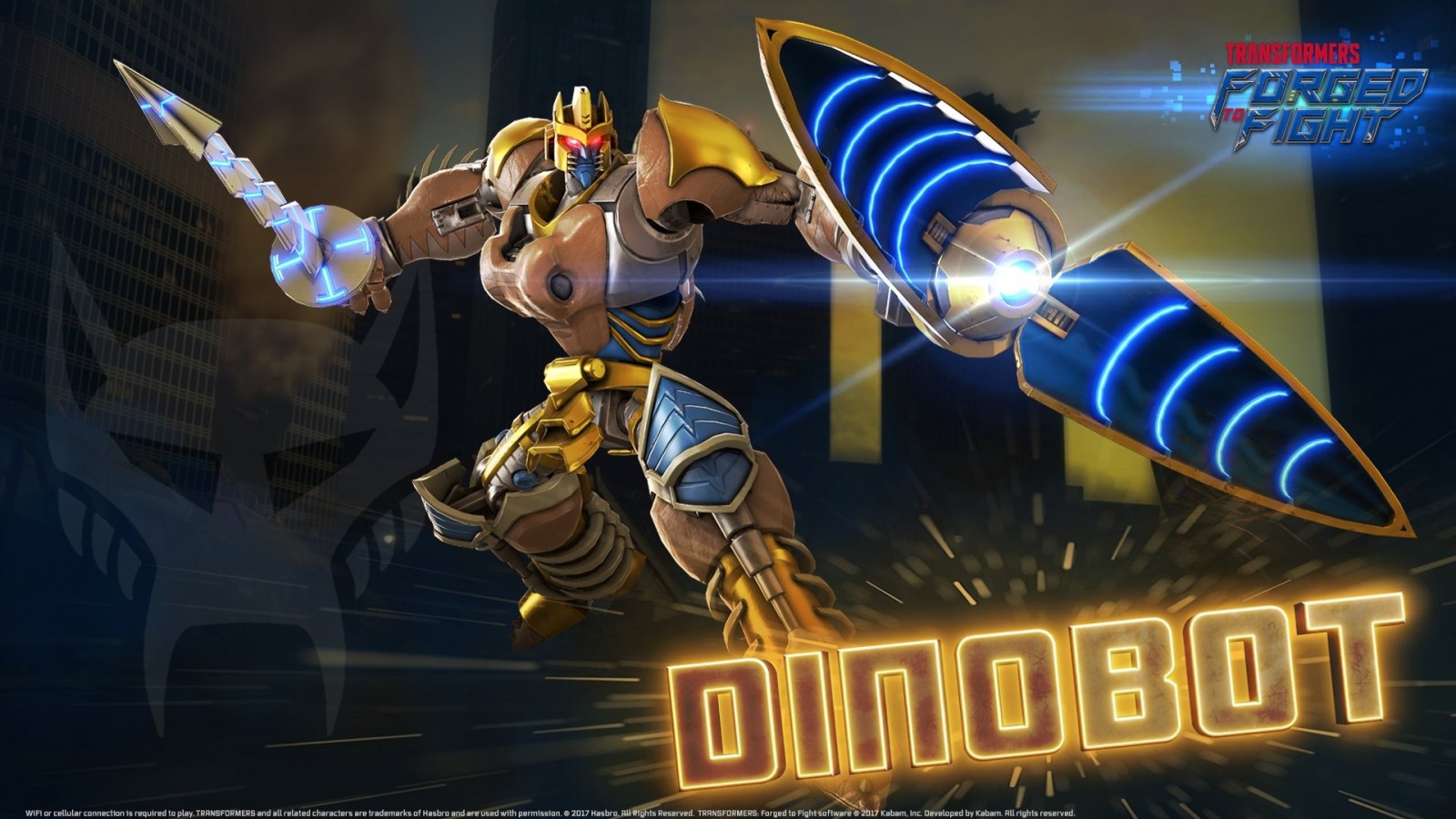 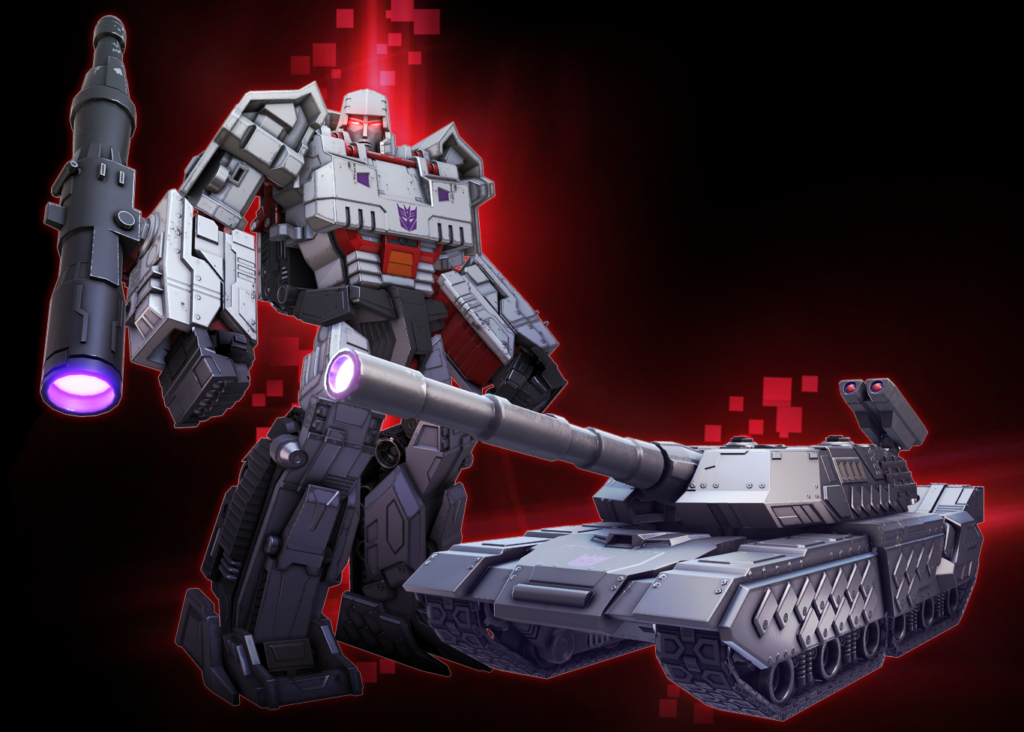 Re: Beast Wars Dinobot Available in Transformers: Forged to Fight (1924567)
Posted by Va'al on December 2nd, 2017 @ 2:44am CST
We've received direct news from Kabam and Hasbro and their PR department that the latest mobile game in the Transformers family - Forged to Fight - has received recognition from the Google Play store in the category Most Competitive Game for 2017! If you're interested in who else received the award, check out this link.

Re: Beast Wars Dinobot Available in Transformers: Forged to Fight (1924587)
Posted by Sunburnninja on December 2nd, 2017 @ 7:34am CST
I may be wrong, and it’s awesome the game won this, but I’m not exactly sure there is any competitive-ness in forged to fight other than ”pvp”, in which it’s still the exact same thing as the offline options. 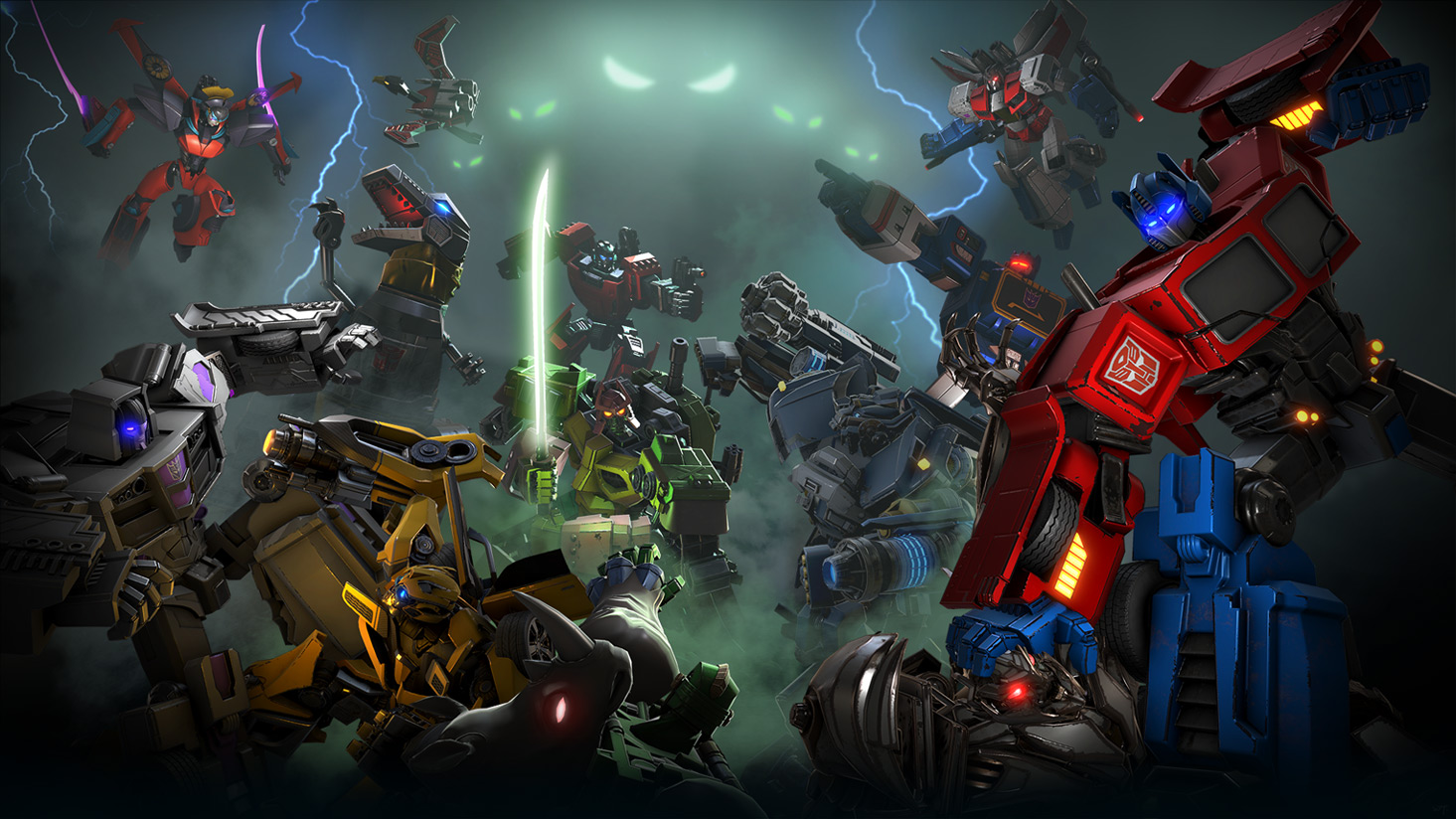 Somewhere between Generations, Authentics, and something else entirely, the yellow scout will be available to play in-game as of 21 December at 10 am PST -but the bot intel report is already viewable on the site, and copied below, along with some new images. Check it out, and let us know what you think! 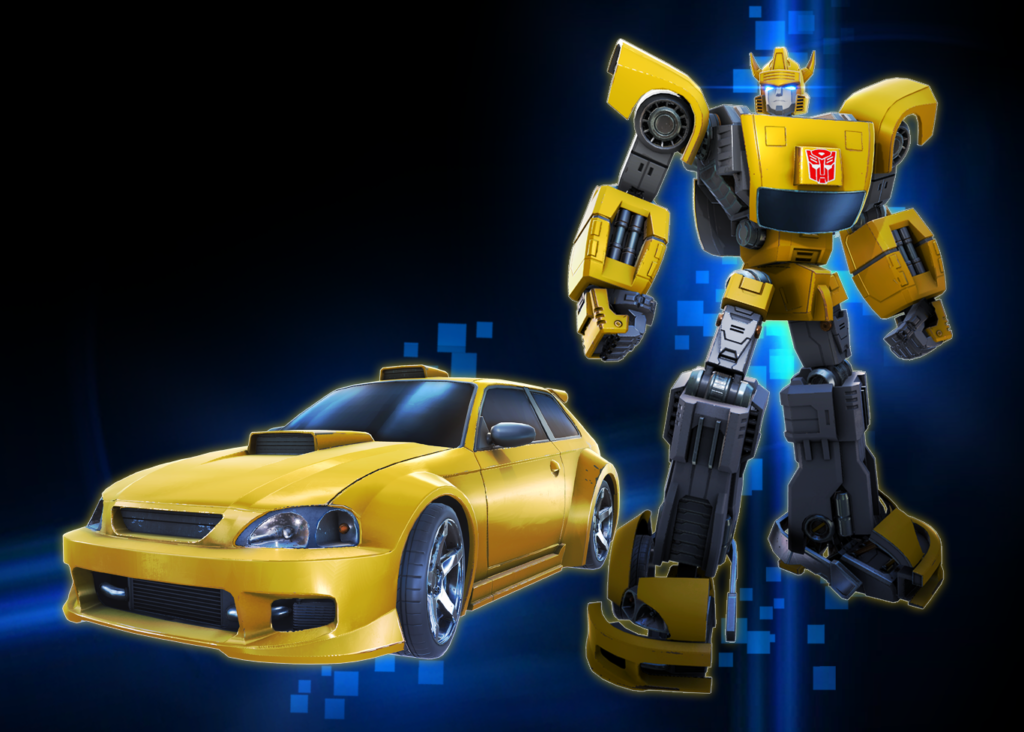 Add Bumblebee to your ultimate squad December 21st at 10AM PST!
About Bumblebee:

Small, eager, and brave, Bumblebee acts as messenger and spy. Due to his small size, he dares to go where others can’t. He idolizes the bigger Autobots, especially Optimus Prime and Prowl while having a special bond with all his human allies.
Stats and Abilities:

Grants a 24~32% Melee Evasion Buff that is removed the next time this bot Evades.

Grants up to 3 Critical Rate Buffs that each increase Critical Rating by 20~28%. These buffs are removed each time this bot lands a hit.

Bumblebee isn’t the strongest or toughest bot, but while staying close to his enemy, he channels his unparalleled courage.

Bumblebee generates 2~4.0 of Remaining Max Power every second and gains a 10% Melee Bonus while the enemy is within close range.

100% chance to increase Critical Damage by 60% for the duration of this Special Attack.

Bumblebee overcharges his pistol to fry his enemy’s systems before knocking them off their feet.

100% chance to Power Lock the opponent for 10 seconds.

Bumblebee’s wheeled combat comes together with his love of ranged attacks.

Grants 20 Critical Rate Buffs that each increase Critical Rating by 20~28%. These buffs are removed each time this bot lands a hit.

Rhinox – Bumblebee will tear through Rhinox’s shielding, leaving him prime for Bee’s critical hits.
Soundwave – Bee can Shield Break with both Ranged and Melee his, ensuring even the mighty Soundwave can’t Reflect Ranged attacks for long.

Bonecrusher – The master of Bleeds will punish Bumblebee with every crit.
Dinobot – Bumblebee is rewarded for dashing at opponent’s and staying near them, but dashing into and hitting Dinobot’s block would be a painful mistake.

Nightbird’s Mark – With both his two major abilities boosted, Bumblebee will become exponentially more powerful.
EMI Module – Bee will gain the ability to Evade Ranged Attacks, forcing you to stay within Melee Range and in turn allowing him to generate power with his Signature Ability.

Definitely go for it. I will warn you though that if you really need Energon and completing missions isn't enough, then you'd have to pay for it (it's optional though).
Re: Beast Wars Dinobot Available in Transformers: Forged to Fight (1929503)
Posted by Va'al on January 3rd, 2018 @ 2:07pm CST
After an initial tip from fellow Seibertronian Carnivius_Prime, we now have full confirmation that the Kabam Studios mobile game Transformers: Forged to Fight will be adding - as of the morning of 4th January 2018 - Maximal leader Optimus Primal to the roster of playable characters!

The full bot intel report can be found below, or here for the official news post on the game's site, along with an image of the character in both gorilla and robot mode. Take a look, and let us know what you think of this take on the classic design. 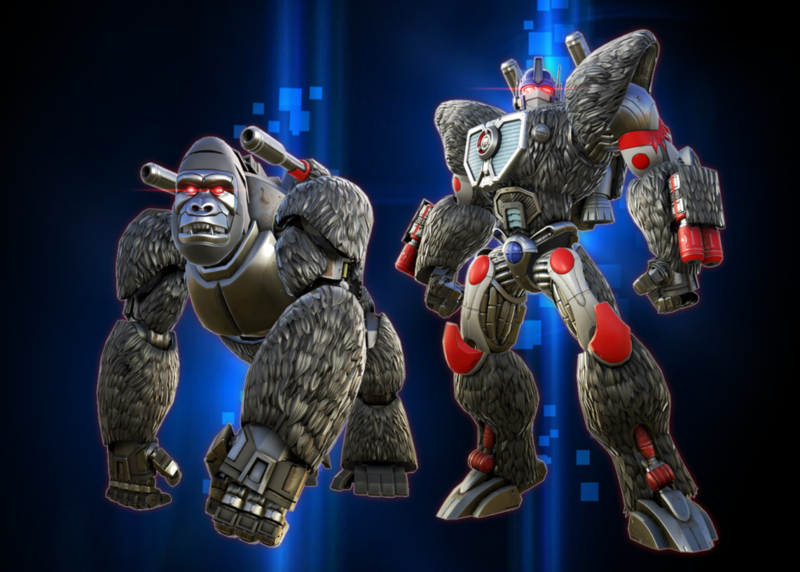 The Maximal starship Axalon, commanded by Optimus Primal was pulled into a Transwarp Portal while in pursuit of a Predacon warship. Stranded on ancient Earth, Primal and his crew of Maximals fought the Beast Wars to preserve the timeline and protect all life in the galaxy.
Stats and Abilities:

20% chance to gain an Armor Buff, reducing damage from attacks by 2~4% with a maximum of 10 stacks of Armor. This ability requires at least one active Armor Buff and stops if Optimus Primal is Armor Broken.

Blocked Melee Hits have a 30% chance to grant a Melee Buff, increasing Melee Damage by 10~18% for 6 seconds.

Converts all Armor Buffs to Melee Buffs, increasing Melee Damage by 10~18% for 6 seconds.

Optimus Primal hopes for the best, but always prepares for the worst. Damaging Debuffs have shorter durations and recover health when they expire.

Damaging Debuffs expire 8% faster for each Armor Buff on Optimus Primal. Optimus Primal gains 1~5% of his max Health each time a Bleed on him expires.

Special 1 – Law of the Jungle

Optimus Primal launches into the air to bring justice to his foes.

If Optimus Primal has received any Bleeds this fight he will inflict Bleed on the opponent that deals 30~38% of Attack over 4 seconds. The strength of the Bleed increases by 20% for each Bleed inflicted on Optimus Prime this fight.

The quickest way to peace, is to end the battle quickly.

50% chance each sword hit to inflict Bleed, Dealing 40~60% of Attack as damage over 5 seconds.

When it comes to dealing with Predacons, sometimes brutal is best.

Optimus Primal’s rage grants him the maximum amount of Armor Buffs.
100% chance to inflict Attack Down, reducing the opponent’s Attack Rating by -20% for 32 seconds.

Heavy Attacks of Beast Wars characters grant 4~20% Attack Rating for 5 seconds and Purify Damaging Debuffs as long as there are 2 or more Beast Wars bots on Primal’s team.

Security Module – Increasing Optimus Primal’s Armor will make him more survivable and give him more opportunity to use his high attack rating against the opponent.
E.M.I. Module – Optimus Primal’s biggest disadvantage is his reliance on Melee Attacks. This module will help ensure he can thwart ranged opponents like that pesky Starscream.


Re: Beast Wars Dinobot Available in Transformers: Forged to Fight (1929504)
Posted by Quantum Surge on January 3rd, 2018 @ 2:10pm CST
Saw this report with the Primal chips, and man am I so excited, especially with how disappointing Bumblebee's limited availability was. Can't wait to get the boss monkey big bot!
Click here to view additional comments about this topic at the Energon Pub Forums ...