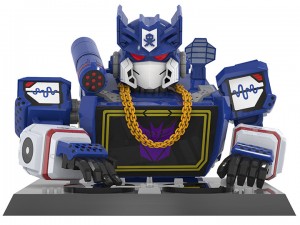 ------------------------------
NEW PRE-ORDERS
------------------------------
Toxin, feared by many to be the strongest and most dangerous symbiote, is now a Marvel Legends figure! Legend of Zelda fans can now pre-order Majora's Mask with LED light-up eyes. Scooby-Doo and the rest of the Mystery Inc. gang are joining the LDD Presents lineup! Fred, Daphne, Velma, and Shaggy come with real fabric clothes and each one of them comes with a piece to build your Scooby-Doo figure! New S.H.Figuarts figures this week include Iron Man, Scarlet Witch, and Dragon Ball's Jeice. PCS Collectibles is bringing out a bunch of new PVC statues from TMNT, G.I. Joe, and Transformers. With an incredible likeness, Blitzway is proud to introduce the official 1:6 scale Jimi Hendrix action figure, a legendary musician who pioneered a new era of rock. Square Enix is venturing into the Marvel Universe with new Variant Bring Arts figures of Spider-Man, Iron Man and Captain America. 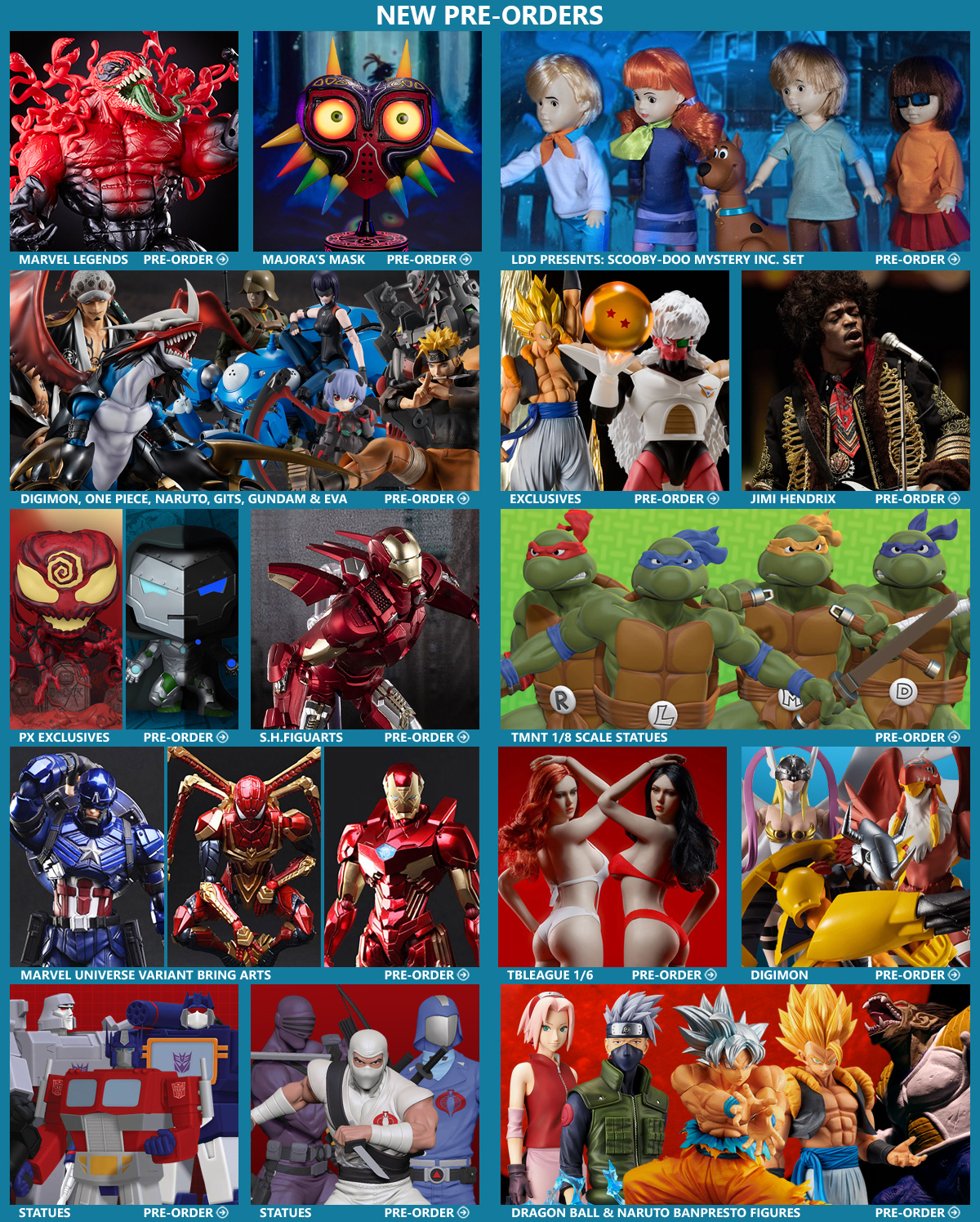 ------------------------
NEW ARRIVALS
------------------------
Two waves of Marvel Legends have arrived: the X-Men Sugar-Man BAF wave and the Deadpool Sauron BAF wave. Lobo from Injustice: Gods Among Us is now here in 1/12 scale from Storm Collectibles. On top of the S.H.Figuarts that went up for pre-order. Ultra Instinct Goku is now in stock! Anyone looking to cosplay or just wanting to have fun, two wearable helmets are now available: the Star Wars: The Black Series Boba Fett helmet and the MMPR Lightning Collection White Ranger helmet. 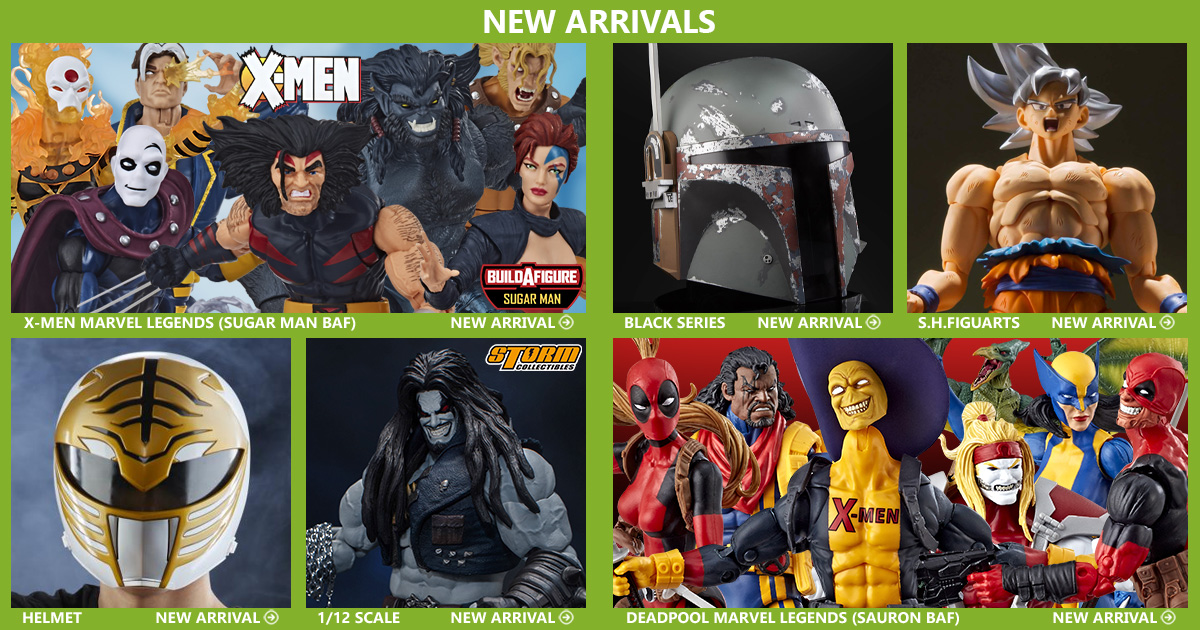 joevill wrote:Pre-ordered that Soundwave bust! I normally do not collect statues but that is so freakin cool!

------------------------------
NEW PRE-ORDERS
------------------------------
Four new X-Men Marvel Legends figures have been announced with Wolverine, Mystique and a two-pack of Magneto and Professor X. Three packs from Mattel's Little People Collection are now up from Masters of the Universe, The Lord of the Rings and The Office! Kotobkiya is bringing out an awesome model kit of Wonder Woman along with an ArtFX statue from the upcoming Wonder Woman 1984 movie. Both of Mezco's King Kong of Skull Island figures (regular and PX exclusive) are being rereleased. The S.H.MonsterArts of Godzilla from Giant Monsters All-Out Attack will be the heat ray version. Prime 1 Studio has some cute vinyl figures from DC and Berserk to start their Cutie1 series. The Amazing Yamaguchi series continues with Marvel's Cable as the 20th figure. MOTU fans can now pre-order Man-at-Arms in 1/6 scale! From NECA, the TMNT Casey Jones mask is back up for pre-order and images are now in for the next wave of ReAction figures from Super7. Kotobukiya's next statue in the Bishoujo line is Black Cat Steals Your Heart! Board game fans be sure to check out the new card game of the hilarious comic series Strange Planet. 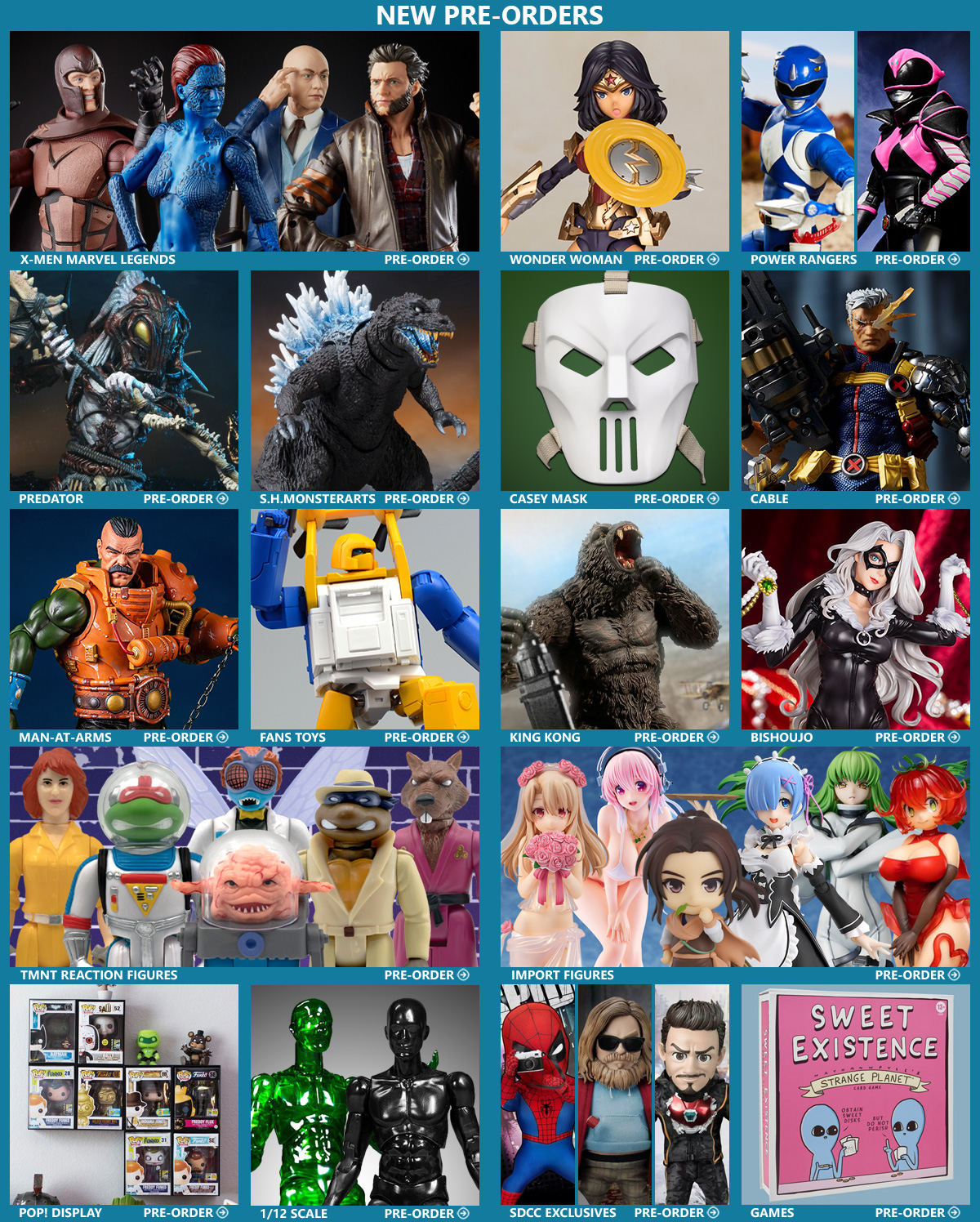 ------------------------
NEW ARRIVALS
------------------------
TruForce Collectibles Mega Man X figure is now here and features dieicast armor, LED functionality in the X Buster with red LED, swappable face and hand parts, customizable effects parts and over 30 points of articulation to help you recreate all of X's iconic poses! S.H.Figuarts Iron Man Mark LXXXV, as seen in final battle of the epic Avengers: Endgame, is now in stock and includes an optional Tony Stark head, four pairs of optional hands, energy blade part, repulsor effects, nano lightning refocuser, lightning refocuser effect parts, nano shield part. Two Bishoujo statues have arrived with Supergirl and Dark Phoenix. Hot Toy's Aquaman from the movie of the same name is ready to ship and features an accurate likeness of actor Jason Momoa. DBZ fans, be sure to grab the S.H.Figuarts Yamcha figure! Another 1/6 scale figure that arrived this week is Zorro based on The Mask of Zorro film. X-Men's Beast from the Marvel Legends Retro Collection is here and ready to devote his time to expanding the frontiers of human knowledge. 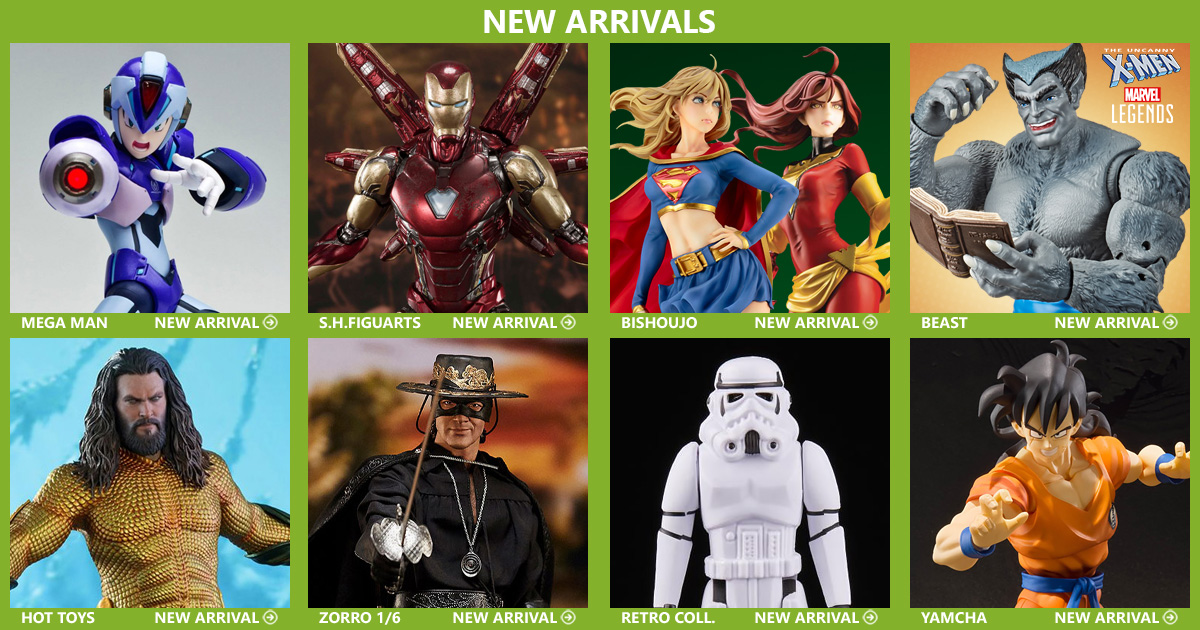 ------------------------------
NEW PRE-ORDERS
------------------------------
X-Men fans get another week of awesome Marvel Legends figures including Domino, Old-Man Logan, Hawkeye, Deadpool and Negasonic Teenage Warhead! Itchy and Scratchy from The Simpsons have been made into vinyl figures by Kidrobot. Kotobukiya is bring out a new version of Leatherface in the Bishoujo line. There are also four new statues for MMPR fans to check out! A huge restock has been done for NECA Godzilla figures and also NECA has two new figures with Annabelle and Misfits The Holiday Fiend. Funko Pop! collectors have a variety of new figures they can pre-order from Pokemon, Disney and the new video game Ghost of Tsushima. Bandai USA is coming out with a new line of Dragon Ball figures called Dragon Ball Evolve. Four new Hiya Toys Alien and Predator figures are also now up for anyone looking to expand their collection.

------------------------
NEW ARRIVALS
------------------------
Scorponok has finally arrived from the War for Cybertron: Earthrise line. Other Transformers items that have come in are the Bumblebee DLX Scale Collectible Series Bumblebee figure and the Furai 12 Optimus Prime (G1 Ver.) Model Kit. Two Andre the Giant ReAction figures are also now in stock for fans of the classic wrestling superstar. Batman and The Joker are in from McFarlane's DC Multiverse Batman: White Knight series. Carl from The Walking Dead is now here in 1/6 scale from Threezero. Both deluxe and regular versions are available. Fans of the evil Lord Voldemort can now pick him up as a stylized Q-Fig.

------------------------------
NEW PRE-ORDERS
------------------------------
This has been an absolutely packed week with all of the new reveals. One of the hottest items this week is a set of figmaPLUS accessories featuring 5 of SEGA's consoles with their controllers and video games: Master System, Genesis, Game Gear, Saturn, and Dreamcast. Fans eager for the next Halo video game can pre-order the NERF MA40 Motorized Dart Blaster! Straight from the classic colored comics by Eastman and Laird come the Teenage Mutant Ninja Turtles Elite Series action figures from Playmates! Sniper Wolf is back with a resissue of the Bishoujo statue from Metal Gear Solid. Count down to Halloween or Christmas with your favorite Mogwais and Gremlins using the Gremlins countdown calendar. Celebrating its 10th anniversary, Beast Kingdom has teamed up with Blizzard to launch the D-Stage selection of classic Starcraft II characters. TBLeague is bringing out a 1/12 scale figure of Death Dealer based off the art of Frank Frezetta. Doc Brown is joining Marty and Biff in NECA's Ultimate figure series. 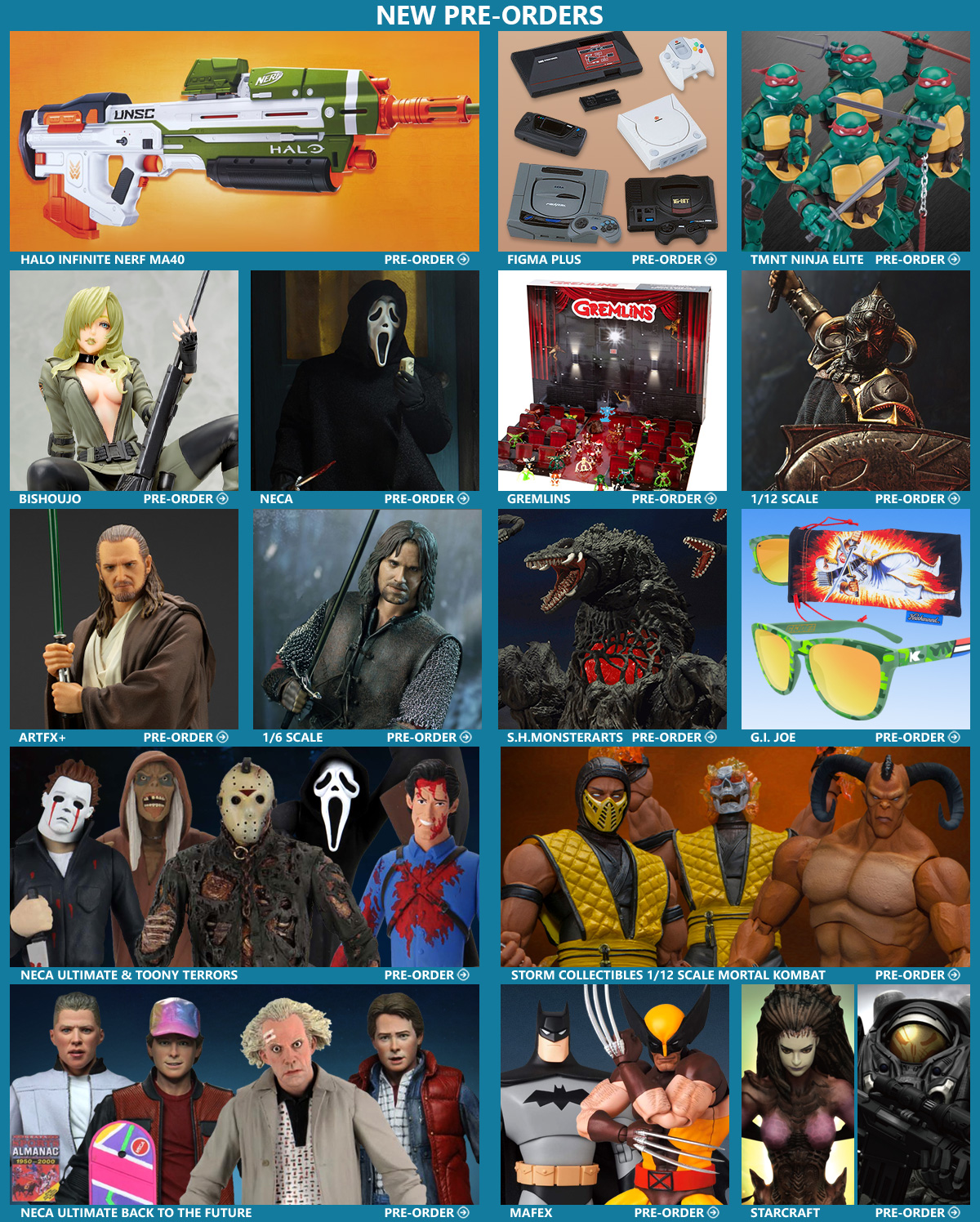 ------------------------
NEW ARRIVALS
------------------------
Tons of new arrivals are here! Wave 4 of the Power Rangers Lightning Collection is now available with the set and three singles. Gamers, be sure to check out all the lights, coasters, mugs and other gear from Paladone. Cosmic Ghost Rider from the Marvel Legends Series is also now available. From the upcoming Cyberpunk 2077 video game, pick up Keanu Reeve's character Johnny Silverhand! Anyone looking to complete their cosplay of Asajj Ventress can grab the highly detailed Asajj Ventress collectible lightsaber that features authentic sound effects, a real metal hilt and includes a specially designed display base. Back in stock is the Ultimate Part 2 Freddy which has plenty of gruesome detail and tons of accessories, including three interchangeable heads, 2 dogs, gloved hand, monster hand, and removable hat. From the Amazing Yamaguchi action figure series with insane poseability, Wonder Woman is ready to defeat any villains that stand in her way. Anyone looking for new board games, relive the excitement of the Garbage Pail Kids trading cards in a whole new way with the Monopoly game. 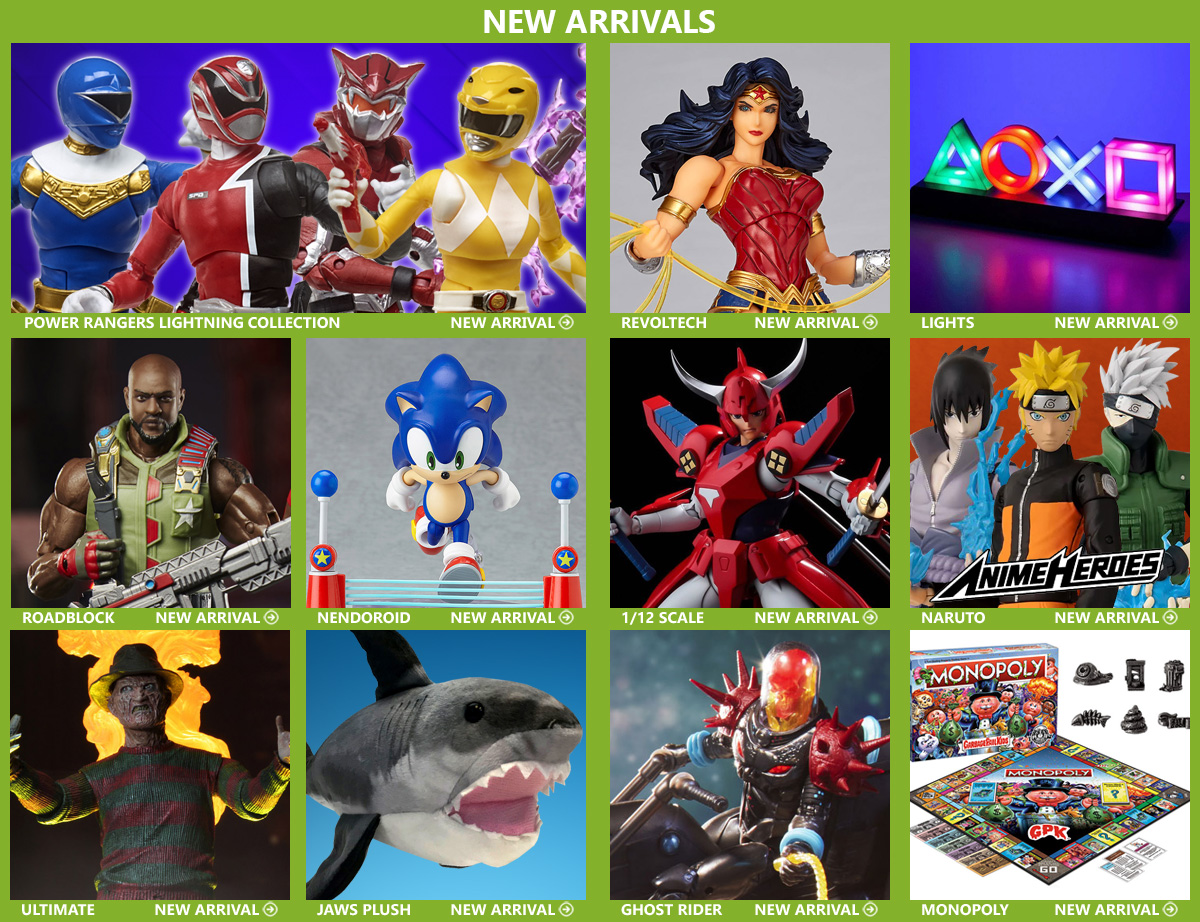 ------------------------------
NEW PRE-ORDERS
------------------------------
Tons of new items went up this week. Super7 has created three Disney characters in their Ultimates line: Mickey, Pinocchi and Prince John. Bardock has joined the S.H.Figuarts line along with two new Ultraman figures. Robot Spirits gets two new figures as well with the Crossbone Gundam and Tachikoma. Pennywise has been brought down to size with Mezco's Designer Series. Banpresto has a bunch of new figures from Dragon Ball, My Hero Academia, Demon Slayer, One Piece and more. The two newest X-Men figures to join the Marvel Legends Series are Rogue and Pyro. We've also got a BBTS shared exclusive with the Vitruvian H.A.C.K.S. Cryo Zombie! There are a bunch of new Funko Pops! to choose from: McDonald's, The Simpsons, Casper, Dragon Ball and Harry Potter. Two Marvel S.H.Figuarts are now up from Avengers: Endgame with Thor and Thanos. Vivi from Final Fantasy IX has been created into an action doll by Square Enix. Games such as Monopoly, Operation and Jenga received some makeovers with Super Mario, Pac-Man and The Mandalorian. While we wait for the new Witcher TV series to air, we've got a new Nendoroid with Triss and a new Geralt figure from Dark Horse. There is all this and so much more to check out this week! 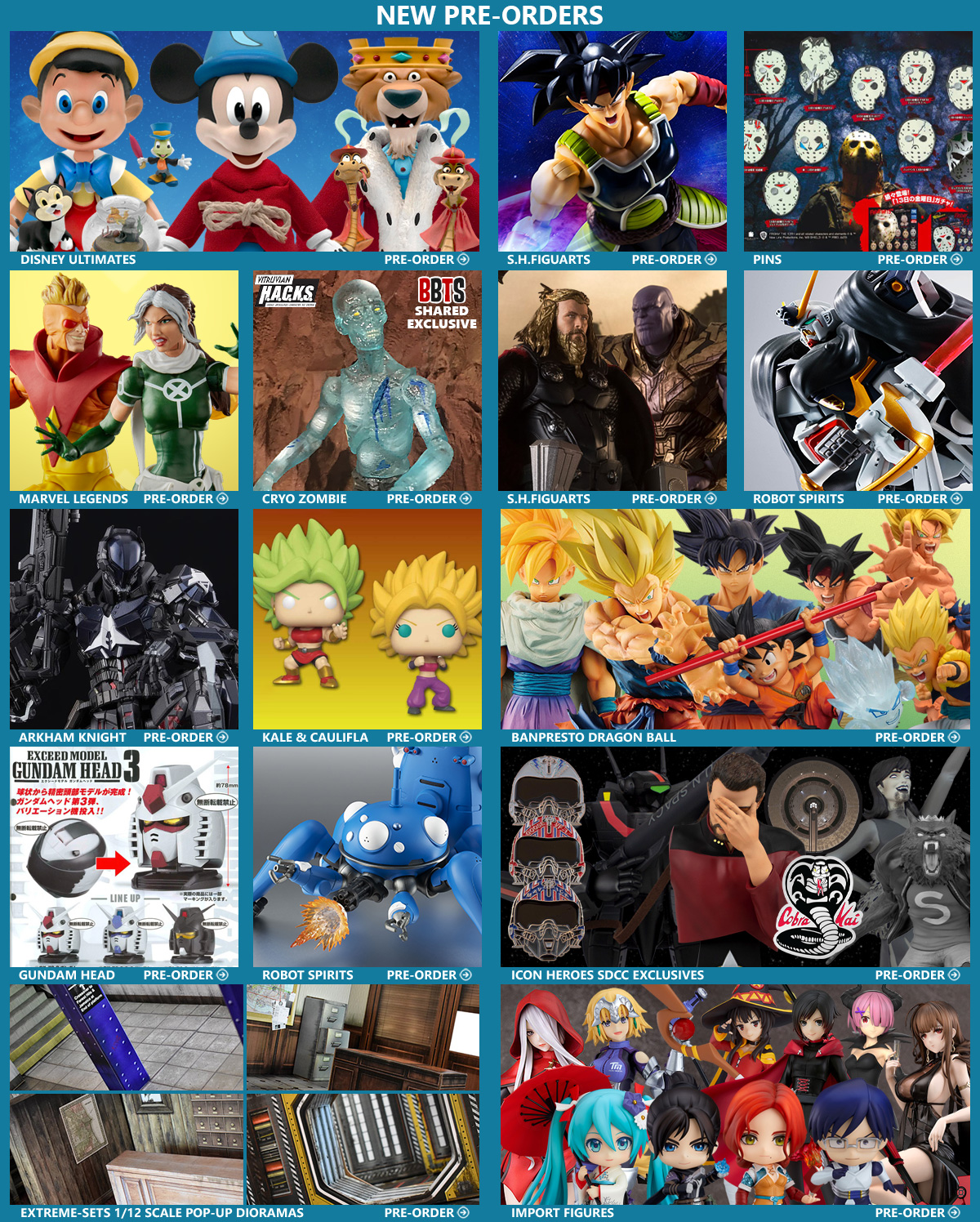 ------------------------
NEW ARRIVALS
------------------------
The Night King is finally here in 1/6 scale from the Game of Thrones television series. Fan favorite character, The Child, is here in Pop! form holding a cup. Seven Justice League Animated figures are now in stock. The Mario and Luigi Nendoroid figures are also back in stock. Third party figure fans can grab the GT-99 ReBuilder figure with 52% off along with the Planet X Apocalypse also with a great discount! Kotobukiya brings G.I. Joe fans the Bishoujo Lady Jaye statue and also, for Star Wars fans, the ArtFX Darth Maul statue. The Dark Souls Crystal Lizard 1/6 scale light-up statue is back in stock. Be sure to grab it before it is gone! 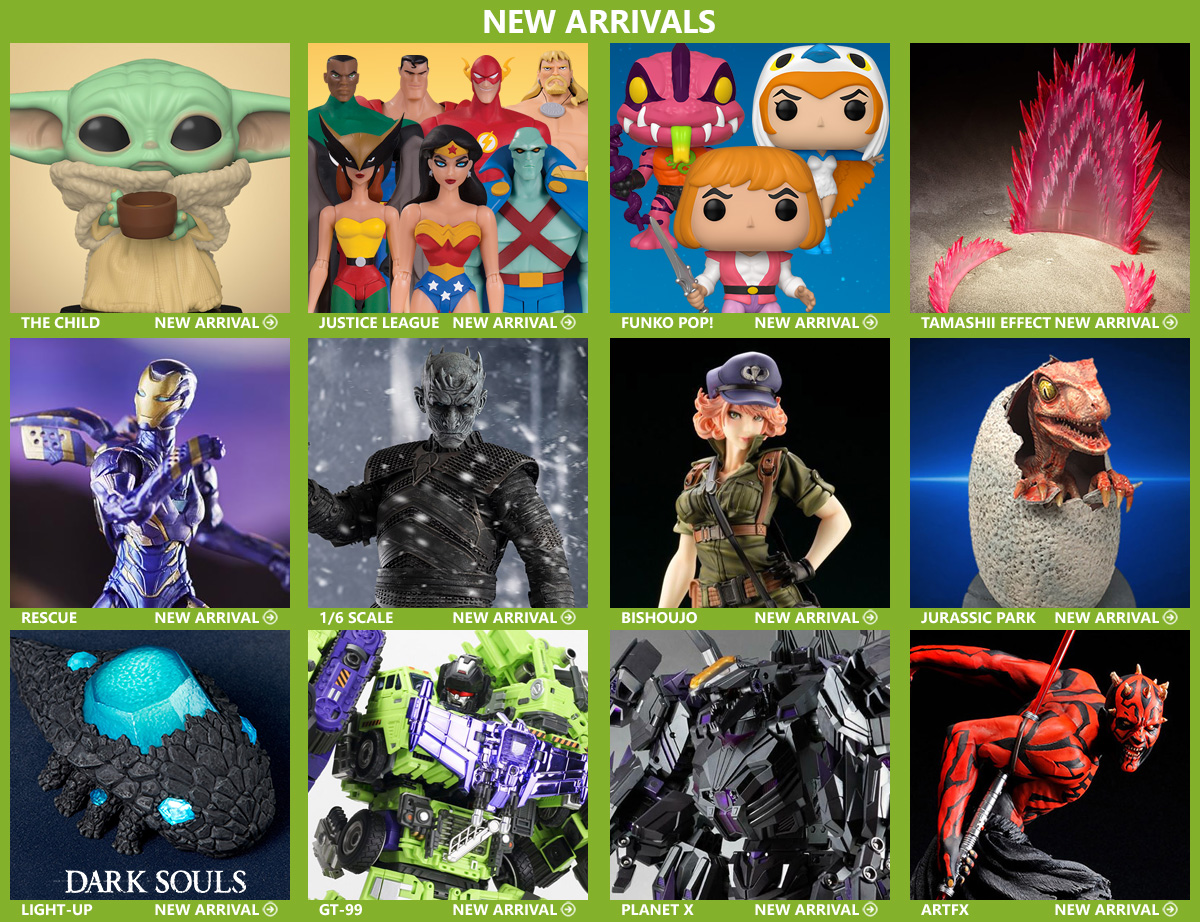