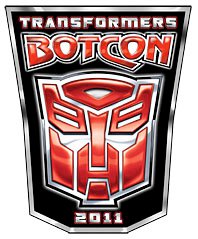 Last night, the BotCon 2011 schedule was released, hinting at a number of interesting panels.

Seibertron.com is your source for all the latest BotCon 2011 news!

Rodimus Prime wrote:Yeah, no disrespect to those guys, I will probably go meet David Kaye and Flint Dille. I am mostly looking forward to the Hall of Fame ceremony. Is that just a presentation or will there be food?

They've been pretty emphatic about there being no dinner, but "movie" snacks (popcorn, then?) for the film sneak peek thing.

I'm hoping we gets tons of pics & answers regarding the following:

(2)will TF prime get any voyagers,leaders? ultras? supreme toys?

(4) when & will we get a usa hasbro MP Rodimus prime release?

Brian from Botcon sent out an email concerning an update to the Botcon schedule. These are the guests to be in attendence for the Transformers: Prime script reading and limited autograph signing. They also confirm the presence of Peter Cullen which we first revealed here. The information is below.

All of the staff is preparing for your arrival in Pasadena and we want to share these last minute updates!

On Saturday for the Transformers Prime Cast Script Reading the following guests will be in attendance:

and of course….Peter Cullen –Optimus Prime!

In addition, they will all be available for a very limited number of autographs after the reading:

For all of you registered guests, the Transformers Collectors Club booth will have a special Let’s Make a Deal session on Friday at 2PM. We have a lot of one of a kind left over pieces/parts and complete figures from past exclusives and convention sets! You will definitely find something you are looking for so stop by the club booth!

If your confirmation email got lost, plan to come at 8PM on Thursday night to the Pasadena Convention Center to pick up your convention packages!

See you in Pasadena!

For all of you registered guests, the Transformers Collectors Club booth will have a special Let’s Make a Deal session on Friday at 2PM. We have a lot of one of a kind left over pieces/parts and complete figures from past exclusives and convention sets! You will definitely find something you are looking for so stop by the club booth!

That sounds like fun! Who wants to grab me a Nightbeat? I'm serious.
Re: BotCon 2011 Panel Details Available (1232568)
Posted by NatsumeRyu on June 2nd, 2011 @ 6:26pm CDT
Since Bumblebee's a high screen-time character (and therefore *likely* present at some point in the script), I wonder if Cullen will be beeping for him? LOL Too bad Welker's not there. I'm guessing they'll be doing one of the episodes where Megatron was comatose then, assuming no one else will try to pick up the slack.
Re: BotCon 2011 Panel Details Available (1233179)
Posted by cannonfodder4000 on June 3rd, 2011 @ 2:17pm CDT

deathy wrote:I'm hoping we gets tons of pics & answers regarding the following:

(6)what is the plot if any for TF prime's cartoon?

What do you mean by "A plot if any for the TF Prime cartoon"? you're talking as if it's still in prototype stages when it's (Obviously) been going on for the past few months.