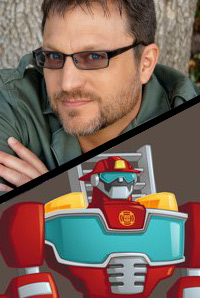 We are thrilled that eleven individuals from the show will be at BotCon in San Diego!. Attached you will find brief bio's along with pics of all those appearing at BotCon 2013. All eleven will be there on Saturday ONLY.

BRIAN HOHLFELD is the Supervising producer/co-creator of Rescue Bots. He also wrote the movie "He said, She said" and has worked extensively on the Winnie the Pooh franchise.

NICOLE DUBUC is the Story editor/co-creator of Rescue Bots. Having started out as a child actor, Nicole began a career writing for children's television with credits on Kim Possible, Transformers Prime and of course, Rescue Bots!

GREG JOHNSON is a Story editor for Rescue Bots. Long time Transformers fans will note that before Rescue Bots, Greg wrote four episodes of BEAST WARS. Since then his writing has included Ultimate Avengers, G.i. Joe Renegades and Rescue Bots.

STEVE BLUM has voiced hundreds of amazing characters and is most well known to Transformers fans as Starscream from Transformers Prime and Heatwave from Rescue Bots.

PARVESH CHEENA recently starred in NBC's Outsourced as the lovable Gupta and is currently the voice of the aerial bot Blades on Rescue Bots.

D.C. DOUGLAS has a long list of TV and Video Game credits to his name but to Transformers fans, Chase the Rescue Bot is at the top of that list!

IMARI WILLIAMS had provided voices for several Video Game's before landing his first animation role as the muscle behind the Rescue Bots, Boulder!

ELAN GARFIAS provides the voice for the youngest of the Burns siblings, Cody Burns, a young but already skilled Rescue worker!

JASON MARSDEN has done a variety of voice over work, including voicing Duke from G.I. Joe Renegades, and currently can be heard on Rescue Bots as the ill-tempered Kade Burns, older brother to Cody.

DIAMOND WHITE has provided voices for Phineas and Ferb, was a final 5 contestant on "The X Factor" and can currently be heard as the voice of Doc Greene's daughter, the strong willed Frankle Greene, on Rescue Bots

SHANNON McKAIN has appeared on CSI, It's Always Sunny in Philadelphia and to Transformers fans, the voice of the Rescue worker Graham Burns!