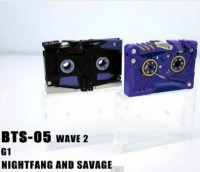 YouTube member ProtoRetro has uploaded his video review of BTS-05 Savage and Nightfang. These cassettes are meant to homage G1 Ravage and Rabat and are compatible with BTS-04 Sonicron or G1 Soundwave. Check out the review embedded below.

this ratbat can finally join my TF classics if ever.

Mind you, I think they're each a little flawed, save Ratbat — who looks fantastic. Proportion issues are the real stone-in-the-proverbial-shoe... but after getting the first two bots, I think how you pose these guys can help cover up their flaws. (The first two have some 18 points of articulation, which helps.)

For this odd Ravage homage, I'm wondering if by pulling out his side panels PARTWAY, and adjusting his legs in a bit more natural pose if he'd look a little better. (?) Also wondering if any 3rd party missiles will help deck him out. Missiles are going to need to happen for this guy.

Either way, I'm stoked about ordering these. Fantastic idea with the Senator Ratbat mode. I somehow feel much better about that being a combined mode instead of doing a ret-con and saying he's a full sized walking character.
Re: BTS-05 Wave 2 Savage and Nightfang Video Review (1365494)
Posted by gothsaurus on April 3rd, 2012 @ 3:38pm CDT
Wow, I just discovered that if you swap the front legs on Savage, he looks a lot less dorky... not to mention keeping the sides tucked in tight and posing him a little more smartly. Not bad.