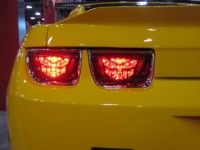 That would rock! I could see a lot of Bumblebee edition Camaro owners picking these up as long as the price is reasonable.