Chevrolet Returns to the Big Screen This Summer in Michael Bay’s “Transformers: Age of Extinction” 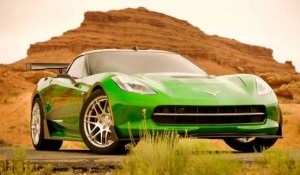 Chevrolet has issued a new press release regarding their involvement in Transformers: Age of Extinction. As we all know Chevrolet has had their vehicles prominently displayed and used for alt modes in all three past live action movies, and Transformers: Age of Extinction will continue that tradition. Their vehicles appearing in the upcoming film include the Camaro, Corvette, Trax, and Sonic. The full press release can be found below:

Chevrolet Returns to the Big Screen This Summer in Michael Bay’s “Transformers: Age of Extinction”

DETROIT – Chevrolet and a Camaro that converts into the iconic Bumblebee will once again turn heads when the Transformers movie franchise returns to screens around the globe in the upcoming “Transformers: Age of Extinction” from director Michael Bay, in theaters June 27.

The latest film also features Chevrolets sold around the world including a Corvette Stingray that converts to Autobot Crosshairs, a Trax and a Sonic outfitted as a Rally Car.

The fifth-generation Camaro converted into Bumblebee in the 2007 film “Transformers,” the 2009 film “Transformers: Revenge of the Fallen” and the 2011 film “Transformers: Dark of the Moon.” The latest edition features two Camaros specifically built for the film, one a heavily modified vintage 1967 Camaro SS and the other a futuristic concept Camaro.

“The Transformers movies have been a great partnership for Chevrolet by allowing us to introduce our vehicles to new fans, young and old, around the world,” said Tim Mahoney, chief marketing officer, Global Chevrolet. “Now for the fourth time, you’ll see a Camaro as a heroic Autobot, a fitting role for one of the stars of Chevrolet’s lineup.”

Said LeeAnne Stables, executive vice president of Worldwide Marketing Partnerships for Paramount Pictures: “The Chevrolet partnership with this iconic Michael Bay movie franchise has become one of the longest-running and most innovative movie-brand relationships in film history. This new Chevy campaign will definitely bring new and exciting elements to a global audience of Transformers movie fans around the world.”

In addition to providing vehicles for the production, General Motors’ locations for filming included GM Design at the Warren Technical Center, the Milford Proving Ground and the Lansing Grand River Assembly plant.

About Chevrolet
Founded in 1911 in Detroit, Chevrolet is now one of the world’s largest car brands, doing business in more than 140 countries and selling more than 4.9 million cars and trucks a year. Chevrolet provides customers with fuel-efficient vehicles that feature spirited performance, expressive design, and high quality. More information on Chevrolet models can be found at http://www.chevrolet.com.