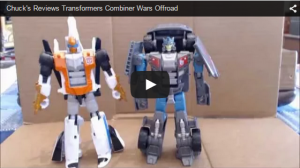 chuckdawg1999 has given us a good first look at what to expect from the upcoming Stunticon Offroad in his newest video review.

Here's what Chuck has to say:

chuckdawg1999 wrote:Like Alpha Bravo, Offroad is a new character that shares some design cues from an older character, in this case Wildrider. Since it uses a transformation scheme that is very reminiscent to the Aerialbots one has to wonder if this a retool or at the least shares a buck with the Autobot team. Offroad might be my favorite CW figure released thus far and is the stand out member of the Stunticons.

Is he worth your money and time? Check out the video review and see if he's the right fit for you, and when you're done, come on back to the forums to share your thoughts with us!

It should be noted that Offroad is a shared mold and has already been retooled into the upcoming (and unreleased) First Aid from the Protectobots team in wave 3. Most of the torsos, limbs and Legends figures will be retools and redecos of one another to save costs for Hasbro and allow them to produce more figures for us to enjoy and create custom combiners.

You say that as if they are doing us a favor. They are fortunate that anyone buys their "deluxe" figures at $17 a pop. I do not see these figures flying off the shelves. Wave one is currently shelf warming at all three big box stores in my area and has been for weeks......