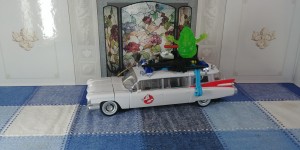 Greetings and happy Wednesday fellow Seibertronians. Just in from member ChuckDawg we have a video review of the new bot who gets 'em caught, Ectotron! As a fan of Transformer video reviews I can say Chuck provides a succinct informative review with a great narration. If you don't often check out video reviews of Transformers, and especially if you're on the fence about this Cybertronian slayer of specters and spooks then this is definitely worth your time. Enjoy the video and as always let Chuck and the Seibertron crew know your thoughts in the forums!

And a nice intro from the man himself:
"If there's something strange in your neighborhood, who ya gonna call? TRANSFORMERS!!??!! In what was a surprising move Hasbro released a crossover with the Ghostbusters to co-celebrate both brands 35th anniversaries, man I feel old. The figure is surprisingly solid but the joints are on the cusp of being too loose, something that might be an issue down the line. One bonus that I don't think is getting enough attention is the inclusion of a rubberish Slimer figure. Yes, there are some complaints about detail and the overall fit and finish, but I think Hasbro did as well as they could releasing a figure that appeals to such a small audience."

Re: Chuck's Reviews Transformers / Ghostbusters Crossover Ecto-1 / Ectotron (2025228)
Posted by Stargrave on June 20th, 2019 @ 12:59pm CDT
Yeah I asked about that a little while ago I didn’t push for details no reason to but I was told something to that effect just that it’s a no go at this time.

I’m picky with my reviewers and honestly I know it’s funny but I kind of take it seriously - it’s like getting to watch someone play and fidget with toys you really want you don’t want an annoying presentation you want someone knowledgeable and informed and positive not overly critical.

That’s just me though.