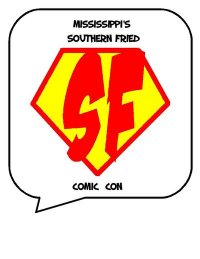 Here in the South, we fry everything, and I do mean everything. Even comic books, apparently. That's why we're proud to introduce Mississippi's Southern Fried Comic Con coming to the Cabot Lodge in Jackson, MS, on June 26th and 27th. Southern Fried Comic Con offers dealer tables, artist alley, and several exhibitors including the 501st Legion (Mississippi Rancor Raiders), the Mandalorean Mercs, U.S.S. Haise (Star Trek Fan Club), Missihippy, and the Shire of Iron Ox (SCA). This promises to be a fun weekend with lots to see, so come on down and check it out! For more information don't forget to check out the Southern Fried Comic Con website and Facebook.Advance tickets are now on sale from Heroes & Dreams: Comics and Collectibles in Flowood, MS, and 3 Alarm Comics in Biloxi, MS. Prices are $9 for single day admission or $12 for a weekend pass. Come on down, y'all!

Meet ya there Savage.