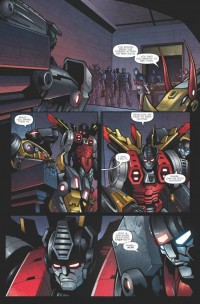 The official Transformers facebook page has posted the Creator Commentary for Transformers Prime: Beast Hunters #1. Series co-writer Mairghread Scott gives us her thoughts on the first four pages, which we've mirrored below for those without facebook access.

PAGE 1: After the events from Rage of the Dinobots, was it easy to start an all new ongoing like this and run with it?

MAIRGHREAD SCOTT: Mike and I had always hoped for an ongoing to come out of Rage; the world is so rich it seemed a shame not to explore it. Of course, there is a significant time jump from the mini-series to Beast Hunters so that we can (eventually) bring in the cast of the TV show. That made picking out exactly when and where to start a bit of a challenge, but this has been a really fun story to write over all.

PAGE 2: How scarred are the Dinobots from their experience in ROTD? Has the current situation on Cybertron forced them to change much and adapt?

MAIRGHREAD SCOTT: I wouldn’t say the Dinobots are so much “scared” from their time in ROTD as liberated by it. They have a chance to build a life on their terms at the end of Rage. Issue 1 is about what their new roles are in society and how they’re coping. Of course, there are always challenges to face, but I think the Dinobots are definitely moving forward rather than falling back.

PAGE 3: Considering his position now, is Grimlock the one facing the greatest of challenges from everyone else on the planet? Even though most are struggling to survive more than he is?

MAIRGHREAD SCOTT: Grimlock is dealing with the hardest part of being a leader: that not everything is in your control. Since he’s a ’Bot striving for control as much a possible in his personal life (Remember his problems with his Dino-mode in Rage?), any problem he can’t immediately solve is really difficult for him to cope with. And since he runs the last real city on Cybertron, there’s a lot he’s not going to be able to solve.

PAGE 4: Are you finding the challenge of writing an ongoing series as opposed to a mini-series more vigorous or demanding than what you may have initially believed?

MAIRGHREAD SCOTT: On the contrary, I am first and foremost a long-format writer. I’m always looking to explore every nook and cranny of continuity. Although I love the cleanliness of a single arc mini-series, it’s the month-by-month floppies that let me really dig in to all of Cybertron’s forgotten corners.

Poyguimogul wrote:Despite nice colors. The art is kind of ICKY imo... The Grimlock drawings look good, because they have toy for reference, but the others.... ICKY!...imo..

and the writing is the most interesting ive seen the dinos in ages.

i cant see myself buying this but im intrigued enough to buy the trade when it comes out.