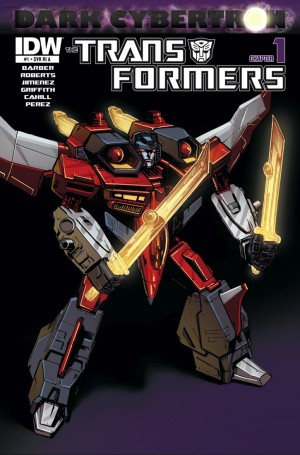 Courtesy of Newsarama, we have a lenghty and juicy interview about the upcoming IDW Transformers crossover event: Dark Cybertron! The website has interviewed the two wordsmiths behind the creation, James Roberts (MTMTE) and John Barber (RID), as well as showing some artwork from covers and interior pages of what's to come. Read some snippets below, and check out the whole interview here!

John Barber: The setup has been that Rodimus has been leading a group of Autobots (well, mostly Autobots) on a starship, the Lost Light, in search of the legendary Knights of Cybertron. Meanwhile Bumblebee tried to forge a new government on Cybertron, but failed, letting Starscream take over the planet. While that was going on, Optimus Prime—now calling himself Orion Pax—has gone off into space and hooked up with a couple other Autobots.

So, yeah—they are pretty spread out, and Dark Cybertron will start to draw them together. Shockwave’s got a plan, and it’s a big plan, and it encompasses a lot of the universe. The Lost Light gets drawn into one part of the plan, and everybody on Cybertron gets pulled another way… right away, Orion Pax hooks up with the Lost Light crew and he and Rodimus team up to go into a dark dimension called the Dead Universe that’s as horrifying as it sounds.

James Roberts: In the nigh-on 30 years since Transformers began, there have never been two ongoing Transformers comic books running side by side, focusing on different sets of characters in different parts of the same universe. And so this is our first opportunity to indulge in some proper crossover action.

In the past, with big Transformers stories, the sense of occasion has come exclusively from the size of the threat. In the case of Dark Cybertron, yes, the threat is big—the threat is massive, in fact—but in addition to that, you get the thrill of seeing characters from separate storylines mix it up with each other. In a way, it's the Transformers version of the Avengers movie after 50 issues spent building up our respective casts.

Roberts: As I’ve said before, the story is also fun because you get to mix-and-match the characters: Character A from Robots In Disguise, might share a scene or a subplot—or maybe, in some cases, just a single panel—with Character B from More Than Meets The Eye. As the story builds and the various threads start converging, you get more and more of these team-ups, and I hope readers get as much of a thrill out of the combined cast as I did. Hey, I’m a Transformers fan of old, and Dark Cybertron makes me feel like I did when I used to read the weekly Transformers comic in the UK and they’d have multi-part epics where all the big name characters from different timelines—Optimus, Galvatron, Ultra Magnus, etc.—were on the same page.

Barber: And if you’re coming at this from the other side—if you’re a fan of big-scale action with real characters that have real feelings—I think this comic will show you that the Transformers comics might be for you.

I’m excited to get to do a story this big, this far reaching, that pulls as much together as this does—while still reaching for the future. I think where we leave the characters at the end of this is really, really exciting.